The candidate and the black middle class meet up in the Superdome at the Essence Music Festival. 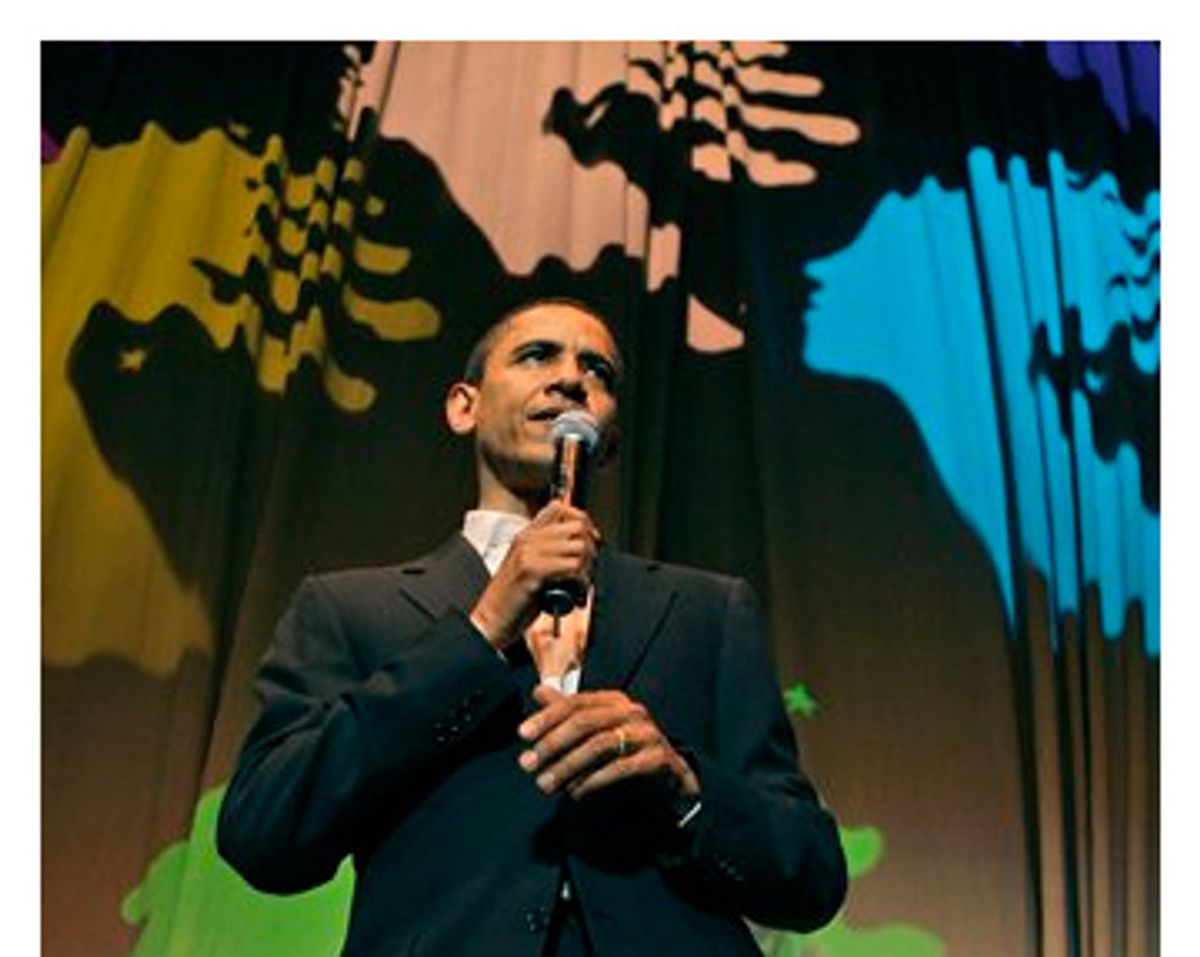 By 10:20 Thursday night, when Barack Obama took to the Essence Music Festival main stage, some 20,000 assembled at the Superdome had already witnessed well-choreographed song-and-dance (Ciara), heard hard-hitting rap (Ludacris), and received fiery faith-filled invocations (the "McDonald's Inspiration Celebration" with gospel singers Smokie Norfil and Vanessa Bell Armstrong). And they were soon to get a double dose of old-school pleas and promises from the Isley Brothers and the O'Jays.

So the crowd needed none of the above: Instead, calm and friendly straight talk fit the bill. That's what the senator from Illinois brought; dressed in a black suit and an open-collared white shirt, Obama was introduced in semi-frenzied fashion by author Michael Eric Dyson as the "next president of the United States ... rooted in his blackness but not restricted by his race." That last bit, with its implications about Obama's much-discussed "electability," prompted especially loud applause.

"How's it goin'?" Obama began, pacing the stage comfortably with a cordless mike. The crowd issued an emphatic cheer. And for the local contingent, the unspoken response was "at least a little better," because the annual event, forced to relocate to Houston last year due to the slow pace of post-Katrina rebuilding in New Orleans, had returned to its customary site. Since its inaugural in 1995, the festival, three days and nights of concerts, speeches and "empowerment seminars" hosted by Essence magazine, has drawn a predominantly black, largely female audience to New Orleans. The crowd at the Superdome on Thursday night was a blend of the national and the local, heavy on the black middle class that New Orleans is struggling to keep, and festival organizers expect to match or exceed their 2005, pre-hurricane total of 230,000 attendees by the end of the event. That's a little lower than the Crescent City's current population (down from the 454,000, pre-Katrina) and not quite the campaign-leading 258,000 donors registered to date for Obama's presidential campaign.

Obama may be the rock star of the presidential campaign, but at Essence he fit more neatly into the proud legacy of African-American expression on display, from R&B and soul to rap and reaching yet further back to traditional brass-band funeral marches and African purification rituals. Not lost on anyone, especially Obama, was the fact that 22 months ago, this venue was the gathering spot of last resort for an even larger crowd, also mostly black: Katrina evacuees.

"Everywhere we go, I'm met by magnificent crowds like this one," said Obama. "And people are telling me that they want change. People have decided it is time to turn the page." Yet this would not be a night for breakthrough sound bites and detailed agenda setting. Neither was it a moment to dwell too long on the post-Katrina sufferings of New Orleans. It was, after all, "a party with a purpose," as the promo materials put it, and Obama seemed simply to want a welcome seat among the revelers -- and a sense of shared purpose.

He found one easily enough, dovetailing with the Essence Festival's focus on family, and on building hope and opportunity for children. In a city where some 70 schools are yet to reopen and where a staggering number of young black men have served jail time, this theme is more resonant than any long-held note or kicking bass line.

Obama talked of his wife, Michelle -- "an Essence kind of woman" -- and of the difficulties of the campaign trail, of time away from his two daughters. "Michelle and I don't want our daughters to grow up in a country in which people who are poor or vulnerable," he said, "or old are left to fend for themselves. We don't want them to know that lack of compassion."

He took a brief swipe at the Bush administration's No Child Left Behind education program -- "but they left the money to fund it behind" -- and an even more pointed jab at the compassion theme. "I am my brother's keeper, my sister's keeper," he said. "That's something this White House doesn't seem to understand."

He leaned on his record of having opposed the authorization to go to war in Iraq from the start. "We're funding both sides of this war on terror, and contributing to an environmental crisis in the process." And he knew the power of quoting the war's price tag, $275 million a day, in a city where so many price tags -- for levee repair, public housing and rebuilt schools -- seem cruelly out of reach.

Some have doubted Obama's broad-based appeal to the African-American community; at the Superdome, he engaged the crowd but failed to captivate, as have Jesse Jackson and Bill Clinton in the past. Audience attention drifted at times during Obama's 15-minute talk, but he provoked strong applause by demanding federal attention to New Orleans. "We need a president that will wake up every day and ask, 'How will New Orleans be rebuilt?' And one who has someone specific in charge of that task, reporting directly to the White House." He also hit the right notes on the recovery checklist: leaning on insurance companies to pay their share; following through to make sure that federal "Road Home" program money is distributed; seeing to it that infrastructure and affordable housing are replaced and not abandoned.

Obama was at his strongest when he referenced the civil rights struggle in Selma, Ala., drawing on a speech he delivered in March, in commemoration of "Bloody Sunday," and the Selma voting rights march. "An amazing thing happened in Selma," he said. "People looked at each other and said, 'That's not who we are. That's not what we're about.' And that led to a mighty stream of marchers. Our children are waiting for us to take the same kind of action."

He contrasted such energy with the post-Katrina reality in New Orleans. "After Katrina hit, we had to realize that we were no longer the America we had hoped to be. All the hurricane did was lay bare the fact that we had not dealt with the problems of racism and poverty. The biggest tragedy was that desperate hardship was known here before the hurricane. Poverty double the national average was here before the storm. But here's the good news: America was ashamed and shocked. Our conscience was awakened. We realized that our politics were broken. Suddenly, the curtain was pulled aside to reveal all that."

His was a gentle passion, knowing all too well the real rage that seethed beneath these issues for this crowd. But at times, he also appeared downright tentative: More than once, he said, "when the next president takes office," paused, then replaced the thought with, "when I take office." Bidding the audience goodnight, Obama fumbled a bit to find the opening in a stage curtain through which to exit. "If I can just find which way to go," he said softly, still miked.

It was less a signal moment on the campaign trail than a getting-to-know-you session between a core constituency and a candidate still finding his way. And, as always, the specter of the Democratic Party's front-runner, Sen. Hillary Clinton, was close at hand: She speaks today, at one of the festival's empowerment seminars.

Soon, Obama had found his exit, and the Isley Brothers were onstage, opening with their classic, "Who's That Lady?"

Larry Blumenfeld writes regularly about jazz and culture for the Wall Street Journal, and at blogs.artinfo.com/blunotes. His Salon piece, “Band on the Run in New Orleans” was included in “Best Music Writing, 2008.” He will moderate a discussion, “Ten Years After: The State of New Orleans Music and Culture,” on Aug. 24 at Basin St. Station, in New Orleans. (The panel will be live-streamed by WWOZ-FM.)