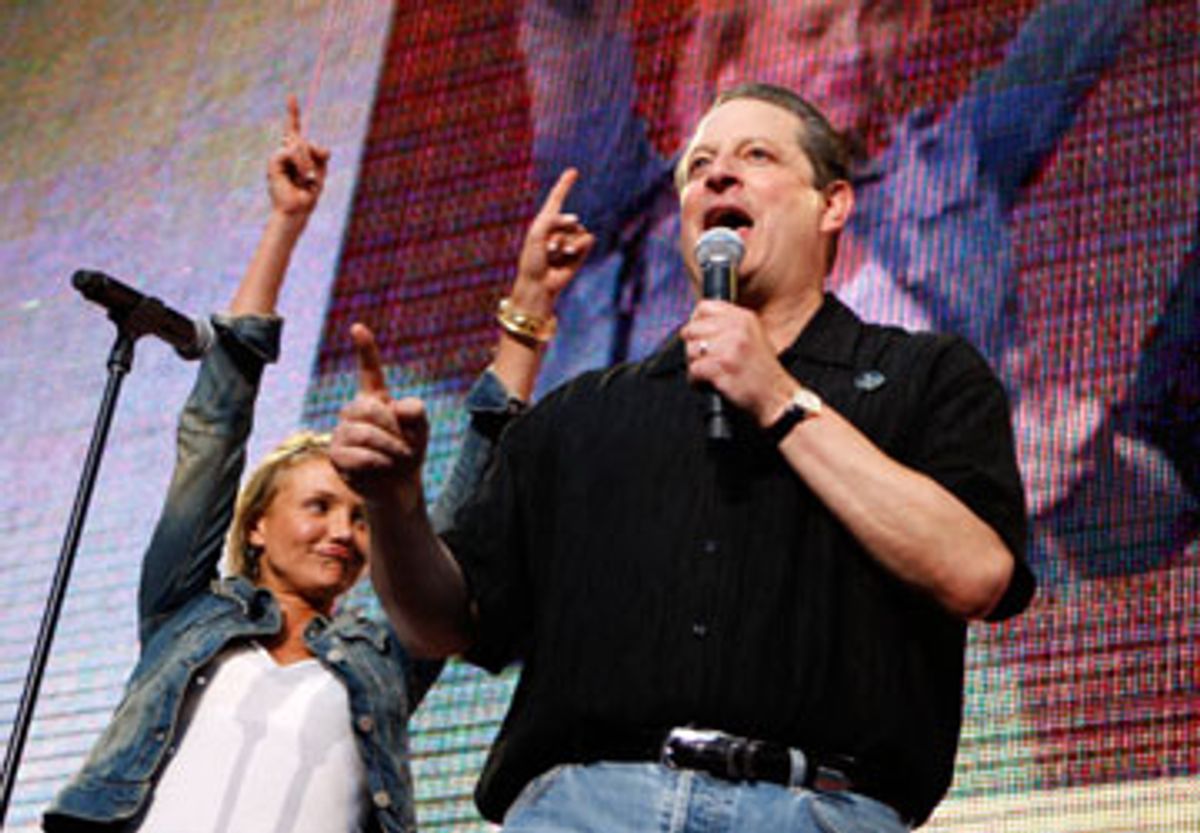 On Saturday, Al Gore simultaneously took over and saved the world.

It was a historic moment, signifying a vast sea change: the death of the Hummer and the rebirth of Flower Power. Two billion fans, 130 countries, seven continents and Jon Bon Jovi can't be wrong.

Watching the Gore-backed, star-packed Live Earth festival -- which included televised, Web-streamed concerts in New York, London, Johannesburg, Rio De Janeiro, Shanghai, Tokyo, Sydney and Hamburg -- there was an overwhelming sense that one was seeing the better angels of the human spirit rise lotuslike through the mud and unfold into a better, sober, new counterculture based on a peace, love, understanding and eco-consciousness. Like the '60s, only without so much meth.

Al Gore's barn-burning second act is an effort to raise consciousness about global warming but it is also an affirmation that there are more of us than there are of them -- a demonstration that there is a better Western consciousness at work than the one that has inspired such hair-raising international enmity over the last few years. The strong contention held by Live Earth that thinking about the collective good is simply a better way to do business was at least a nice idea, and at best, a potentially empowering paradigm shift.

The concerts themselves assiduously avoided any mention of political agenda, apart from a general, collective resistance to buying into false, corporate-manufactured ideologies. If there was any glaring omission, it was that there seemed to be an outright kibosh on Republican bashing. The concerts were effortlessly positive, and successfully intent on bringing home a handful of specific messages in an eco-conscious "Seven Point Pledge" (e.g., buy fluorescent light bulbs) ... all of which could be distilled into the one simple message: Every little bit really does help. You too can contribute to the sum of a unified, greater effort to pass on a healthy planet to the kids.

The concert Gore originally wanted to take place in Washington, D.C., was considered "too hot" politically. From an April Washington Post article: "Sen. James Inhofe (R-Okla.), the ranking Republican on the Environment and Public Works Committee, vowed to block Live Earth from coming to the Capitol, telling the Hill newspaper that 'there has never been a partisan political event at the Capitol, and this is a partisan political event.'"

It must be remembered that both Bush and Cheney came from the energy industry, and that there's a link thisclose between the energy policies of the Bush administration and U.S. military strategy.

In early 2001, President Bush's top foreign policy priority was to address the nation's "energy crisis" by increasing the flow of petroleum from suppliers abroad to U.S. markets. Hence, the Dick Cheney energy task force was assembled with the help of late Enron CEO Ken Lay. The members of this task force included, according to a document obtained by the Washington Postin 2005, officials from Exxon Mobil Corp., Conoco, Shell Oil Co. and BP America Inc.

Documents turned over in 2003 as a result of a Freedom of Information Act lawsuit by Judicial Watch showed that the Cheney energy task force contained a map of Iraqi oil fields, pipelines, refineries and terminals, as well as two charts detailing Iraqi oil and gas projects. These documents were dated March 2001.

But none of this was mentioned at the Live Earth concerts -- it was just a smiley-face, rockin' good time: proud, happy, respectful and, above all, hopeful -- the most feel-good event since villains hijacked America and took us all as prisoners of war on 9/11.

Even the perennially depressed Roger Waters from Pink Floyd was having such a good time he looked as guileless as a 10-year-old.

Chris Rock, who seemed a bit dubious about the whole affair (and made one vast clunker of a laughless joke about Jamaican babies bursting into flame), nonetheless caught the wave long enough to urge his audience to get "smaller-ass cars."

Alicia Keys, the breakaway star of the event, really torched the roof off with her Category 5, gale-force radiance. Great performing artists can maintain poise while seemingly losing all control: Keys literally quivers from the wild waves of super-soul rippling through her. Her backup vocals on "Gimme Shelter" redeemed the otherwise limp Keith Urban and, if hooked up to a generator, could have powered all of the dryers in Dubai.

Madonna, looking -- that bitch! -- more gorgeous than ever, really seemed to enjoy herself, and made Wembley Stadium go bonkers. She sent the important message that, given proper vigilance, a woman can push 50 and still get successfully dry-humped in Lycra-Spandex dance-pants.

The somewhat insufferable Melissa Etheridge, singer of Gore's "Inconvenient Truth" theme song, nearly cleared the stadium by interrupting her songs to offer long-winded lectures about the virtues of biodeisel, but even this was somehow forgivable.

The mainstream global press has seemed intent on under-reporting and undermining Gore's message and the success of the concert. But the naysayers have been, unsurprisingly, reflective of the corporate media conglomerates that ran the articles.

The News of the World, Britain's biggest-selling tabloid, detailed estimates of carbon emissions from Madonna's nine houses, many cars and private jet, calling her a "climate-change catastrophe." News of the World, of course, is owned by News Corp., which is owned by the shameless Republican propagandist Rupert Murdoch.

The Sunday Telegraph, long considered the "house newspaper" of the U.K. Conservatives (and until recently owned by the disgraced Conrad Black), quoted U.S. reports of Madonna's alleged financial links to companies accused of being major polluters.

In an interview with NBC's Ann Curry at the concert, Sting's wife, Trudie Styler, denounced Chevron, one of several companies that gave detailed energy policy recommendations to the Cheney energy task force, for its recent exploits in Ecuador, illegally dumping toxic waste into the drinking water of three indigenous tribes of people and giving them cancer.

The perennially ageless Sting bumped the mood back up, after his wife's gruesome news. The reformed Police were joined by a highly excited Kanye West in a duet that was actually moving, because it was sincerely felt:

Counter-insurgency, Gen. Patraeus has said, is about capturing hearts and minds. There was simply no denying the infectious, unforced good feelings of Live Earth. You can only front for so long: Joy is real or it isn't. This was the kind of love-fest you can't buy or steal ... and even snarky reviews can't kill.

Outside the hotel in which I was watching the concert on TV, I saw a shuttle-bus driver, having trouble getting out of a roundabout, leave his van running to go argue with another driver. His headlights were on; exhaust was pumping into the heat.

The van driver would not have done that if he had seen that concert. The formula is simple: Pay attention to what you buy and the energy you use. Try to decrease your carbon footprint a little bit.

America will look back with deep shame over the last six years, with a regret as awful as a bad drunk tattoo. The enduring problem of terrorism will require international collaboration; collaboration requires motivations beyond self-interest. But, as hippy-delic as it sounds, the case was made: By loving the planet, we can love ourselves, love each other -- and literally save the world.

At the end of the day on Saturday, a certain truth was self-evident: We can do the right things for the right reasons, and the right answer can benefit everyone. Al Gore demonstrated nicely that the truth, however inconvenient, will eventually set you free.