Inside the minds of killer doctors

Some of the accused behind the recent terror plots in Britain were professional healers. What on earth prompts someone to snap from caregiver to killer? 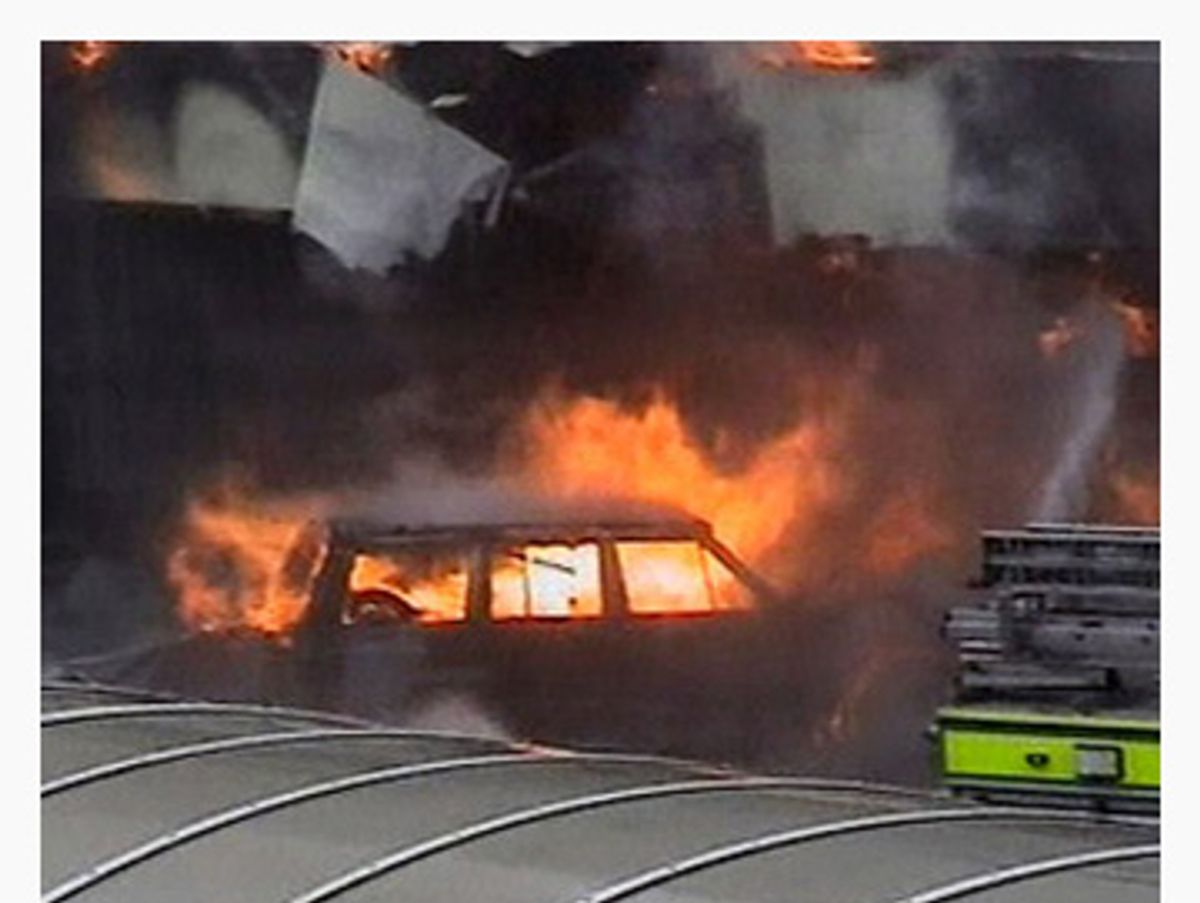 Counterterrorism officials have expressed astonishment that physicians and medical personnel appear to have been behind the recent terror plots involving car bombs in Britain. Physicians swear the Hippocratic oath to do no harm, and are in a caring profession aimed at healing, not killing. This puzzlement, however, betrays a lack of understanding of how members of small terrorist cells think and what motivates them. How, indeed, could a physician plan to inflict mayhem and lethal violence on club-goers or airline passengers?

Last Tuesday, a former Muslim militant, Shiraz Maher, dropped a bombshell in an interview on the BBC's "Newsnight," saying he had known one of the alleged perpetrators, Dr. Bilal Abdullah, a Sunni Iraqi, when Abdullah was at Cambridge. Dr. Abdullah, he said, "actively cheered the deaths of British and American troops in Iraq." From an elite Sunni medical family, born in the U.K. but raised in Baghdad, Abdullah attended the upscale al-Mansour high school and Baghdad College. Abdullah's family and friends have been targeted by Shiites in the past, according to recent news reports, although Abdullah reportedly had converted to the radical Salafi Jihadi form of Sunnism even before the fall of Saddam Hussein's regime. He is alleged to have hated Shiites, whom he considered apostates. He is also said to have come under the influence, while in Iraq, of the Sunni fundamentalist cleric Sheikh Ahmad al-Kubaisi, of the Association of Muslim Scholars.

Although not all the suspects so far detained in the attacks may be presumed guilty, Dr. Abdullah was arrested at the scene, on fire. He likely believed that Britain and the U.S. were responsible for the hundreds of thousands of deaths in Iraq -- though this is a gross simplification of a complex war -- and that the imperial powers had fatally marginalized Iraq's formerly dominant Sunni Arabs in favor of Iran-linked Shiites and separatist Kurds.

Abdullah's actions are consistent with the research findings of University of Chicago political scientist Robert Pape, who found that most suicide bombers are protesting what they see as the humiliating occupation of their country by a foreign military. He theorized that the bombings are intended to affect public opinion, and so to bring about changes in political attitudes in the occupying country toward the occupiers. Although the other alleged cell members are not Iraqis, they would have agreed that a key region of the Muslim world is occupied by Western troops, and felt similar outrage. At least one of the other plotters is thought to be from a Palestinian family displaced to Jordan by the rise of Israel, another source of anger in the Muslim world over occupation of Arab land.

Yet, the actions of the group in Britain were too erratic and error-prone to be the result of careful political planning. And the self-immolation by some of them raises questions as to their deeper mind-set. Terrorists imagine the world in black and white, as full of demons and angels, and place themselves on the side of the angels. Sociologist Mark Juergensmeyer has called this way of thinking "cosmic war." Small terrorist cells arise in part because their members develop a specific way of looking at the world, which they reinforce for one another in everyday interactions. As the group becomes more and more distinct in its views from the society around it -- and more isolated -- its members can cross boundaries of reason and human sentiment, becoming monstrous.

For caring professions to produce terrorists is hardly unprecedented. Israeli-American Dr. Baruch Goldstein carried out the 1994 massacre of Palestinians in the West Bank city of Hebron, killing 29 persons at the Ibrahimi Mosque and wounding another 150. The No. 2 man in al-Qaida, Egyptian Ayman al-Zawahiri from the elite Azzam family, trained as a physician in Cairo in the 1970s.

Paul J. Hill, who shot down abortion clinic physician Dr. John Britton in 1994 in Florida, was a formally trained clergyman who started out committed to helping people spiritually, not killing them. He became so overwrought about what he considered genocide inflicted on the unborn, however, that he felt compelled to save innocents by killing Dr. Britton. The reverend reflected, chillingly, afterward, "If I wounded him, just shot him in the leg or shoulder, I knew there was an excellent probability that he would return to killing innocent children. In my thinking it just became: I had to kill him."

Becoming a religious terrorist depends on several steps. The first is conversion to a way of thinking by which the perpetrators identify with a core group that they wish to protect, but which they believe is being subjected to great harm. Typically this group is imagined to be composed of innocents or lonely carriers of divine truth, whose existence is both essential and yet precarious.

The second is the naming of the malevolent force that is harming these pure ones. The so-called Christian Identity Movement in Oklahoma, to which terrorists Timothy McVeigh and Terry Nichols had links, posits that the U.S. government is persecuting the vanishing band of Anglo-Saxon Christians, the pure lost tribe of Israel, on behalf of polyglot minorities. This belief appears to have been among the motivations for the two to bomb the Murrah Federal Building in Oklahoma City in 1995, killing 168 people.

The question for true believers thus becomes how to safeguard the righteous innocents from being wiped out by the forces of darkness. Some choose peaceful paths to that goal. If they simply organize protests or join political parties, they become social activists.

But a key motivation for the turn to terror is a sense of extreme urgency. If the true believers are convinced that an occupying force or government is committing daily mass murder, and simply cannot bear for it to continue, they may feel an impulse to do something immediate and dramatic. Hothouse conversations with a select group of like-minded believers can reinforce and multiply this feeling. Dr. Abdullah was seen by his co-workers at his hospital as a slacker who spent all his time surfing Muslim fundamentalist Web sites. If their description is accurate, it seems likely that he was increasingly obsessed with the alleged British and American threat to Sunni Islam.

Activists who become terrorists often view themselves as soldiers in God's army. Seeing all British citizens unsympathetic to the Salafi Jihadi cause as soldiers in an opposing army authorized the terrorists, in their own minds, to target civilians in the Tiger Tiger nightclub near Piccadilly Circus. Their intended victims were not simply late-night revelers in the mind of the would-be attackers, but rather enemy troops on rest and recreation.

Such perpetrators can also be impelled to act by a fear of imminent capture, since in their view this would spell the final victory of the forces of evil over the elect few. After the People's Temple group killed California Rep. Leo Ryan in Guyana in 1978 they were forced by their leader, Jim Jones, to commit mass suicide because Jones realized that this murder would lead to the destruction of their group, which he felt was alone in carrying the truth. Jones began as a pastor in a mainstream church and had at one point been a civil rights leader in Indiana -- a dramatic example of how caring individuals can go wrong.

It is likely, then, that Dr. Abdullah's group attacked Glasgow Airport in such an amateurish way out of panic, knowing that their botched operation in Haymarket, London, a few days before would likely lead to their arrest. Authorities have found a suicide note, and collective suicide appears to have been as important to them as damaging the airport or killing passengers.

The Glasgow Airport bombing underlines how the Iraq war is not, as President George W. Bush argues, quelling terror, but rather is generating it. How much Iraq-focused terrorism was there in the U.K. before 2003? The earlier Madrid and London Underground bombings were driven by the same motivation. That said, it must be underlined that in British society these individuals had access to peaceful means of expressing dissent and their views of policy. Moreover, most Britons already want their troops out of Iraq -- and so might even have given them a sympathetic hearing if they had not lashed out in irrational rage. And the tragic war in Iraq is not only being fought by British and American troops: Salafi Jihadi guerrilla cells, which may be inspired by preachers like Abdullah's mentor, Sheikh al-Kubaisi, routinely kill dozens of innocent Shiite Iraqis, and have also targeted Kurds and secular or tribal Sunni Arabs. Most Iraqis do not want the Salafi "Islamic state," of which Abdullah dreams.

Ironically, Abdullah and his group have possibly hindered any near-term withdrawal of British troops from Iraq -- if any such logical goal can be attributed as their aim -- since the new Labour government of Prime Minister Gordon Brown will not want to be seen as bowing to coercion by terrorists. Dr. Bilal Abdullah violated his oath as a physician because he cared too obsessively about the putative welfare of some, and cared not at all about that of others.