"Harry Potter and the Order of the Phoenix" 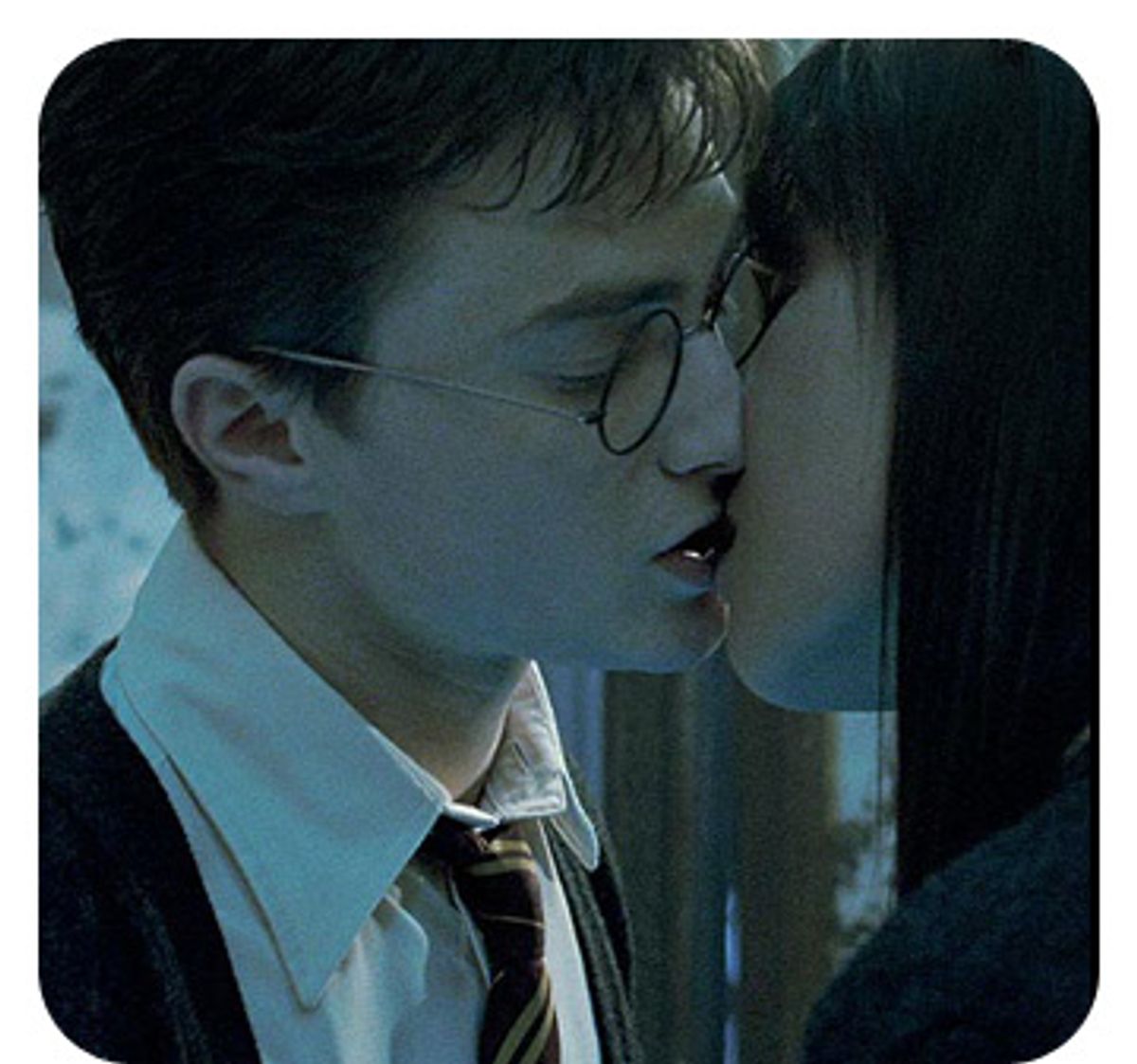 The fifth movie, David Yates' "Harry Potter and the Order of the Phoenix," may present the trickiest case of all: This is a gangly, confusing sprawl, and yet there are enough patches of beauty scattered throughout that it's impossible to reject it wholesale. Watching the thing, I couldn't help feeling a pang of sympathy for Yates and his screenwriter, Michael Goldenberg: "Harry Potter and the Order of the Phoenix," at nearly 900 pages, is the longest of Rowling's books, and streamlining its pleasurably meandering, Dickensian quality couldn't have been easy. Structurally, the picture is jerky and episodic, a jumble of events connected by tenuous threads; after seeing it, those who haven't read the book might be inspired to do so, just so they can be sure of what really happened.

But whatever the overarching problems with "The Order of the Phoenix" may be, many of its scenes are beautifully directed. Yates may be one of those directors who -- for now, at least -- is better suited to working on a small scale rather than undertaking a massive fantasy epic, especially one with such high expectations attached to it. His previous credits include the 2005 HBO movie "The Girl in the Café," a quiet, thoughtful little picture starring Bill Nighy and Kelly Macdonald, and Yates brings a similarly delicate touch to this picture as well. Even the movie's grand climax -- an operatic, unnerving sequence -- includes some lovely special effects that could be viewed as a visual meditation on the nature of glass, and of the universe.

As "The Order of the Phoenix" begins, Harry has endured yet another dreadful summer at the home of his guardians, the Dursleys (once again played by Fiona Shaw and Richard Griffiths). As always, he's counting the days until he can return to Hogwarts -- this will be his fifth year. But this summer has been particularly difficult: He hasn't heard from his closest friends, Ron Weasley (Rupert Grint) and Hermione Granger (Emma Watson), and the sting of that is intensified by the fact that at the end of the previous school year, he'd survived a horrifying confrontation with Lord Voldemort (Ralph Fiennes), which resulted in the death of a fellow student. Harry is sullen and dejected; he feels he deserves more sympathy than he's getting.

Worse yet, just before the school year is to begin, Harry is hauled into court for practicing magic in the Muggle world: As a defensive measure, he'd summoned his patronus (a powerful and protective spirit creature, particular to each witch or wizard) to dispatch a pack of Dementors who'd threatened to suck the spirit from his fat, lazy cousin Dudley (Harry Melling). The Minister of Magic, Cornelius Fudge (Robert Hardy), wants to see Harry expelled; he also refuses to believe that the long-exiled Voldemort is really set to return. Dumbledore (Michael Gambon) comes to Harry's defense but is also strangely distant with him, which further increases Harry's feelings of confusion and isolation.

Harry does get back into Hogwarts, but that early stumbling block is only the beginning of his trials. The biggest danger comes in the form of a beaming, nonsense-spouting little fireplug dressed in a series of pink bouclé Queen Mum-style outfits: The new Defense Against the Dark Arts teacher, Dolores Umbridge (Imelda Staunton), not only refuses to provide her charges with usable, practical information, which inherently puts them in danger; she has also been installed to keep Harry in line, and to curb his outspokenness. To that end, she drags him into detention, during which he must scratch out on a piece of paper, with an inkless pen, the line "I will not tell lies." The words appear not on the paper, but etched into his skin, his own blood seeping through the curlicued, cursive wounds of his own careful penmanship.

"Harry Potter and the Goblet of Fire" riffed on the bittersweetness of leaving childhood behind; "Harry Potter and the Order of the Phoenix" is a punk shout, a reflection of teenage rebellion and frustration. The finest moments of "The Order of the Phoenix" are the ones in which Harry and his friends and fellow students band together to help themselves -- to reject the complacent ideals of the establishment, as they're reflected in the mincing, insidious Dolores Umbridge, and to jump-start their own world -- their own adult lives -- by harnessing the energy and idealism of youth. Yates grasps the countercultural vibe of Rowling's book, and, as she does, he makes sure it feels modern and vital instead of like some musty fantasy imitation of Woodstock. Led by Harry, the students gather surreptitiously to try to summon their own patronuses -- or should that be patroni? -- and after many false starts, some of them do. One of the most wonderful new characters, a nearly translucent white-haired waif named Luna Lovegood (she's played, with eerie sure-footedness, by Evanna Lynch), delights when a prancing rabbit, made of sparks of light, leaps from her wand. The sequence is beautifully shaped, dazzling and alive.

Yates clearly has a knack for working with actors: He stages Harry's first kiss (the girl is Cho, played by Katie Leung, whom Harry has long had a crush on) very delicately, and without a whiff of sentimentality. Later, Yates brings that same casual touch to a scene in which Harry tries to describe the kiss to Ron and Hermione, only to find that words can't touch it. Hermione attempts to explain the rush of emotions that Cho must have felt -- all intensified by the fact that her boyfriend, Cedric, was killed the previous year -- while Ron listens, slack-jawed, and replies, in a moment that captures perfectly the cluelessness of young males of the species, "One person couldn't feel all that!"

The young actors here are by now so comfortable in their roles that they could practically sleepwalk through them. Thankfully, they don't: One of the pleasures of the Harry Potter movies, as uneven as they've been, is that of watching Radcliffe, Watson and Grint grow up, both as people and as actors. One problem inherent in the series is that characters we came to love in the earlier books and movies must recede to make way for the new ones. That means Gary Oldman's Sirius Black appears in only a few scenes here, but once again, he's wonderful. (With his curly locks and velvet officer's coat, he looks like a denizen of Glastonbury, circa 1971.)

And Staunton's Umbridge, with her smug little smile and matronly deportment, is frighteningly perfect. The movie's costume and production design serve her well, too: In her sensible, square-heeled shoes and pink Welsh capes circa 1975, she's the essence of dowdy propriety. And in one of the movie's wittiest visual touches, her office walls are covered with dozens of porcelain plates, each adorned with a purring, mewing, wriggling soft-focus kitten -- a marvelous bit of shorthand for the cozy oppressiveness of cutesy decor.

There's plenty to look at in "Harry Potter and the Order of the Phoenix," and while this isn't the prettiest Harry Potter movie, cinematographer Slawomir Idziak always prevents it from appearing overdone or gaudy. (Idziak shot Ridley Scott's "Black Hawk Down" and also collaborated with the late Krzysztof Kieslowski on nearly a dozen films.) The most frustrating thing about the picture is that in packing so much information and so many events into a very tight framework, Yates and Goldenberg lose the flow of the story. The picture desperately needs some fluidity. Even so, "The Order of the Phoenix" is an honorable movie, one that struggles to stay true to Rowling's intention and her tone. As a whole, it may not be as lyrical as we fans of Rowling's books might wish. But Yates at least gives us poetry in individual stanzas. And sometimes, just a few good lines are enough to carry you through a poem.