This biopic about a '60s-era Washington disc jockey gets to the heart of what being an American ought to mean. 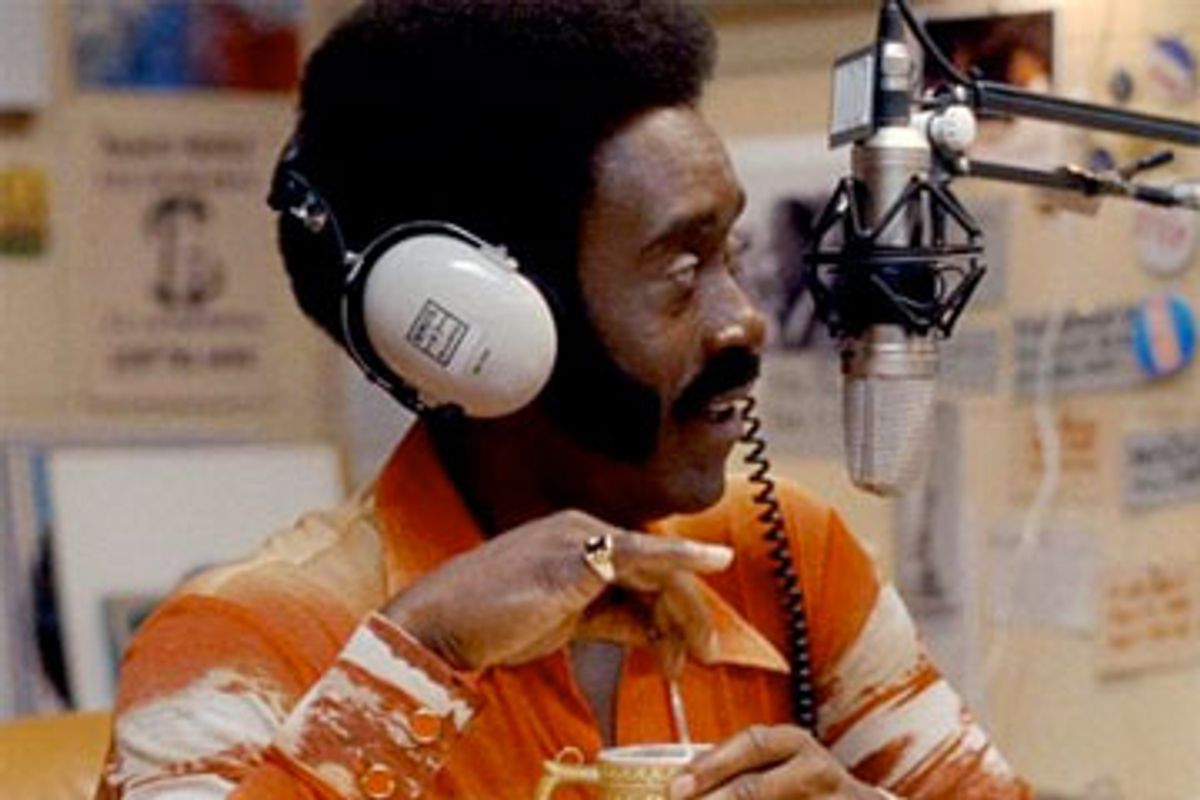 As more and more movies get made each year, some of them terrific and some of them lousy, it's easy to be too grateful for the ones that are merely perfectly mediocre. Sometimes I find myself leaving a picture thinking, "Well, that was very well directed" -- only to realize that I barely cared for any of the characters or what happened to them, that even though I could easily fill out a survey detailing everything the filmmakers had done right, they'd fallen down on the most essential thing: allowing the damn thing to breathe. As conscientious moviegoers, we need to be picky about craftsmanship. But we also need to know when it just isn't enough.

Kasi Lemmons' "Talk to Me," a biopic, of sorts, about '60s-era Washington, D.C., disc jockey and community activist Ralph Waldo "Petey" Greene Jr., is an imperfect picture that's alive every minute, a movie that perfectly captures the vibe of a person, a place, a time and a way of being, and even gets, indirectly and without a whiff of sanctimoniousness, to the heart of what being an American ought to mean.

Petey Greene (played here by Don Cheadle) was a high-school dropout who was convicted of armed robbery in 1960 and sentenced to a 10-year jail term. He became the prison disc jockey -- he was allowed to address his fellow prisoners for 20 minutes each morning and night -- and he earned early parole by talking a suicidal inmate down from the top of a flagpole. ("It took me six months to get him to go up there," he later said.)

After Petey's release, he talked his way into a gig at WOL-AM: The program director there, Dewey Hughes (here played by Chiwetel Ejiofor), took a chance on him. "Talk to Me" shows Greene risking the station's FCC license, not to mention its relationship with certain important record companies, by going on the air that first day and spinning a brash, eloquent, street-talking argument for Motown Records' Berry Gordy as a pimp and a thief. According to Petey, Gordy took gifted black performers, trained them to be palatable to white folk, and then sat back to rake in the money -- the sort of thing no black or white person was supposed to be saying in mid-1960s America. The station's owner, E.G. Sonderling (Martin Sheen), is understandably horrified, until it becomes clear that Petey's insistence on "keeping it real" (or, rather, his inability to do anything but) is drawing a massive local following, a largely though not exclusively black audience that's relieved to hear someone addressing the reality of their lives and the problems of their city with such plain-spokenness and unfettered good humor.

"Talk to Me" moves with a slightly uneven gait; it gets off to a leisurely start, when Lemmons might have done better to just set the works off like a firecracker. Lemmons, who also works as an actress, is an interesting and clearly very talented filmmaker who doesn't work nearly enough. (Her previous features include the evocative thriller and family drama "Eve's Bayou" and the uneven but weirdly compelling crime drama "The Caveman's Valentine," two pictures that show an acute visual sense and an affinity for imaginative storytelling.) There were places in "Talk to Me" where I wish she'd taken firmer, more confident control of the material; it slows down too much in places where it needs to crackle.

But there are times when not even failures of technique can break the spell of a movie, and "Talk to Me" never lost me for an instant. Lemmons and writers Michael Genet (Dewey Hughes' real-life son) and Rick Famuyiwa set Petey Greene up as a kind of folk hero: In the movie's early moments, he struts confidently (although he's really hiding fear and insecurity) into the WOL offices in his sharply tailored velvet suits, their angular lapels trimmed in brocade and paisley, ready to conquer the world. But by the movie's end, Lemmons -- and her star, Cheadle -- have given us a picture of a man who's far more complicated than what we might now call, by that term so laden with bland inhumanity, a "radio personality."

Howard Stern has cited Petey Greene as an influence, and Stern, no matter how you feel about him, does owe a debt to Greene: For all his crudeness, he occasionally comes out with the kind of all-out shocker, the kind of laser-beam social observation, that pulls you up short. But Greene, as Lemmons shows without doing anything so obvious as spelling it out, is nothing like today's radio personalities -- whether they're Rush Limbaugh or Air America types -- who take such self-aggrandizing pride in telling their listeners what they want to hear. Greene certainly appealed to a black audience, but the movie suggests he never pandered to it. In one scene, Petey -- at this point hosting a television show as well as his regular radio slot -- introduces a guest (also black) with the words, "My guest tonight is a pimp who I wouldn't let wash my car. But y'all just elected him city-council member." Clearly, this is a guy who isn't going to let so-called progressiveness get in the way of progress.

Cheadle is wonderful here, riffing his way through the movie with a mixture of effortless charm and hard-nosed practicality. Throughout his professional life, Greene worked for groups devoted to helping ex-convicts reacclimate to society, and on his shows and in public performances he made it a point to stress the importance of education. But "Talk to Me" also shows us a guy who frequently introduced himself as an ex-con, and, sometimes, a drunkard too. On his first WOL show, Cheadle's Petey takes the mic and tells his audience where he's come from, adding that he's been sober for something like five hours. Cheadle makes us laugh, but he also opens the way right into the heart of this guy. Ejiofor's Dewey Hughes is, at first, his noble foil, the straitlaced black guy who's made it in a white man's world. But Petey loosens him up, too, and Ejiofor navigates that subtle transition beautifully. The movie gets extra jolts of style from Taraji P. Henson ("Hustle & Flow"), who plays Petey's longtime girlfriend, Vernell. Her character's outlandish outfits -- slinky, op-art numbers with strategically placed cutouts -- are fabulous to look at, but even more miraculous is the way Henson stands up to them. Whether Vernell is striding into the WOL offices on Petey's arm in a marvelous space-bubble Afro, or holding a broken bottle to his neck after catching him with another woman, Henson makes sure we're always seeing a person, not a stereotype.

The most magnificent scene in "Talk to Me" -- the most difficult to watch, and the most rousing -- is the one in which Petey goes on the air just after learning about the assassination of Martin Luther King. He and Dewey have gone outside, trying to leave the station, only to realize that the city, crazed with anger and pain, has erupted. Petey goes back to the station and simultaneously tries to reckon with the horror of what's happened and urge his city to deal with its anger in the most human, and humane, way possible. "We gonna get through this together," he tells the city -- his city -- as a way of talking them down from the flagpole, only this time, the setup isn't a stunt. The music we hear is unequivocally the most beautiful, most painful, most hopeful song in all of soul and R&B, Sam Cooke's "A Change Is Gonna Come."

Lemmons and her actors make us feel the weight of this pivotal moment. Even those of us who were very young when King was shot, as I was, may remember feeling as if a door had been shut with a cold deadly clank, like a whole host of possibilities suddenly being sealed off. (I know my mother felt that way, and I must have picked up on her feelings.) In the late '60s, it sometimes seemed that great things, for people of all colors in America, were poised to happen tomorrow. With King's death -- and then with that of Bobby Kennedy, two months later -- it became clear that whatever those nebulous great things were, they'd have to be put on hold until the day after tomorrow, or perhaps much later. "Talk to Me," even though it's an inherently joyous picture, acknowledges by suggestion that we're still waiting for some of those things. Petey Greene died from cancer in 1984; until I started hearing about "Talk to Me," I, as a white Northerner, had never even heard of him. Lemmons has made a movie that shows how Petey Greene, ex-con and alcoholic, spoke to everyone, even those who had the misfortune to be outside of listening range.