With even supporters checking his campaign's vital signs, the candidate looks for new life in New Hampshire, the state where he upset George W. Bush in 2000. 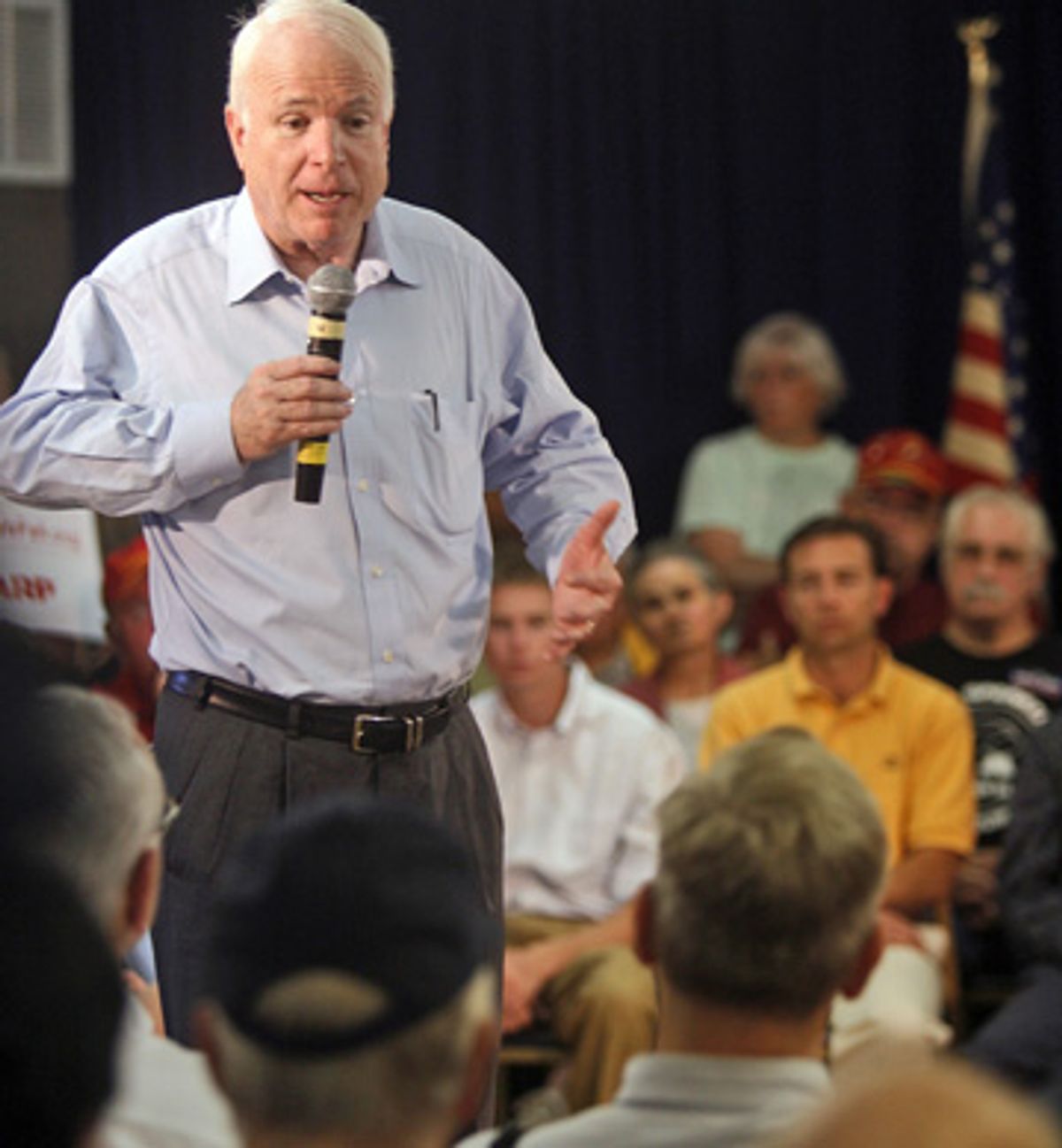 John McCain is not going quietly into the night. "John's had six or eight near-death experiences and he's still here. He's a fighter," said Orson Swindle, McCain's friend and fellow Vietnam POW, who accompanied the beleaguered candidate in New Hampshire this weekend. McCain alluded to his years as an involuntary guest of the North Vietnamese when he declared at a well-attended town meeting at an American Legion hall here Saturday morning, "I've had tough times in my life and this is a day at the beach compared to some others."

McCain was responding to a former supporter who managed to artfully wedge into a single query the Arizona senator's twin vulnerabilities -- the public disarray in his campaign and the candidate's affinity with the unpopular George W. Bush on immigration and the Iraq war. In politics, it is never a good sign when sympathetic voters begin asking questions that include the phrase (admittedly lifted from TV talking heads) "the death throes of your campaign."

Hospice care might have seemed apt after the stunning resignations this week of campaign manager Terry Nelson (Bush's 2004 political director) and John Weaver, the political strategist who had long played Sancho Panza to McCain's Don Quixote. Having blown through $22 million without airing a single television ad and left with only $2 million in the bank, the McCain campaign seemed hard-pressed to pay for its own funeral.

New Hampshire was McCain's resurrection state in 2000 when the Arizona senator who ran as the modern embodiment of Teddy Roosevelt stunned Bush by romping to victory with a 19-percentage-point margin. Small wonder that McCain came to the state here Friday to demonstrate that his White House ambitions had not flat-lined. As poet Robert Frost, a sometime New Hampshire resident, once said, "Home is the place where, when you have to go there, they have to take you in."

"I can win in New Hampshire as I did in 2000," McCain declared to applause at Saturday's town meeting. "I'm not a very good fundraiser. But I can out-campaign any of these guys and I will." McCain certainly has a strong argument when one takes into account the aloofness of Rudy Giuliani and the legendary languor of Fred Thompson, though Mitt Romney may pose a far more formidable challenge in the traditional handshake and town-meeting politics of the New Hampshire primary.

But bravado alone may not save McCain, even in New Hampshire. "He's on the wrong glide path. We've seen him declining over the last six months," said pollster Andy Smith, who directs the Survey Center at the University of New Hampshire. "But if there is a silver lining for John McCain it is that a large majority of Republican voters are still undecided. Also, there is the example of John Kerry." The 2004 Democratic nominee had fired his campaign manager, was so broke that he risked missing payrolls and was sagging badly in the polls just two months before he won the Iowa caucuses and the New Hampshire primary.

While McCain's money woes may be permanent (the perception of impending defeat invariably dries up fundraising), he is not yet a one-man band. His longtime aide Mark Salter, who co-authored McCain's best-selling memoirs, is definitely sticking around. "If it's just John McCain, me and Volkswagen,"he told me in an interview, "I'll be working for him." Back from an earlier staff purge is Mike Dennehy, who ran New Hampshire for McCain in 2000, and who circulated among reporters in Concord Friday handing out what looked like freshly printed McCain business cards that identified him as "senior national advisor" to the campaign.

It is tempting to view McCain's decline as a morality play in which the hero loses everything because he sold his soul to a president named Bush. Certainly, in a tactical sense, McCain was dangerously naive in believing that his embrace by Bush insiders like Nelson would allow him to corral more than $100 million, a ludicrously inflated goal for a politician who has often battled corporate interests and sleazy lobbyists in his own party.

McCain -- who just returned from a trip to the chaos of Baghdad to face the turmoil in his own campaign -- has remained an unyielding supporter of the Iraq war. Asked at a press conference Saturday whether he might support the efforts of senior Republican Sens. John Warner and Richard Lugar to call for a redeployment of U.S. troops starting in January, McCain said, "From what I've seen, I don't support it because it sets a timetable for withdrawal. But I'll take a look at it." Yet McCain's adamant -- or perhaps foolishly stubborn -- support for the troop surge is less a Faustian bargain with the president than it is an extension of his prior beliefs. Back in 2000, McCain was running as a fiscally responsible campaign reformer who also hawkishly prattled about "rogue-state rollback."

But it is the other I-word -- "immigration" -- that has cost McCain far more politically than Iraq.

Republican audiences can appreciate McCain saying, as he did in a Friday luncheon speech to the Rotary Club in Concord, "Democratic candidates for president will argue for the course of cutting our losses and withdrawing from the threat in the vain hope that it will not follow us here. I cannot join them in such wishful and very dangerous thinking."

But McCain's leadership in the unsuccessful Senate fight to pass a liberalized immigration bill -- a goal that Bush shared -- may prove responsible for destroying the senator's White House dreams. As McCain himself said at a Friday press conference, "My position on immigration was obviously not helpful [with] the Republican base." Smith also points out that the immigration issue was symbolic of McCain's prior apostasy from GOP gospel on issues like campaign-finance reform, judicial filibusters and opposition to the administration's anything-goes position on torture. As the pollster put it, "McCain's immigration position reminded conservatives of why they disliked him."

But just as the Maverick McCain of 2000 was probably not as independent from the Republican Party as many journalists (myself included) assumed, so too is McCain now something other than Bush Redux. Asked at Saturday's press conference to differentiate himself from the president, McCain said, "I think that [Attorney General Alberto] Gonzales should not remain in office. I think we should do a far, far better job on climate change ... I'm really unhappy about the failure to act in the past when it was clear that climate change was real."

Outside the American Legion hall in Claremont was a man in a rubber McCain mask wearing a handmade placard that read, "My Campaign Spends Money Like a Drunken Sailor." Without uttering a word, the man resolutely shook his head "no" when asked about the motivations for his mocking, but silent, protest. Since Claremont is not traditionally a mecca for street theater and performance artists, it is probably safe to assume that this stunt was sponsored by a rival campaign.

When told about the protester, McCain, who boasts an excellent sense of humor, said, "It's pretty innovative and I admire it." The prior day in Concord, after he repeated a self-deprecating line from the early days of his 2000 campaign, McCain had said ruefully, "I never have a new joke."

That admission -- more than immigration, more than Iraq, more than a drunken-sailor campaign budget -- may prove the epitaph of the McCain campaign. About to turn 71 next month, McCain may need a new act and a new issue to remind New Hampshire voters of his maverick pedigree and his different-drummer appeal. Otherwise, it may simply be the case that John McCain will end up like an aging rock star, replaying his greatest hits to smaller and grayer crowds.