The GOP is the party of the Iraq war

Many things killed McCain's candidacy among the GOP base, but his support for the Iraq war is not one of them. 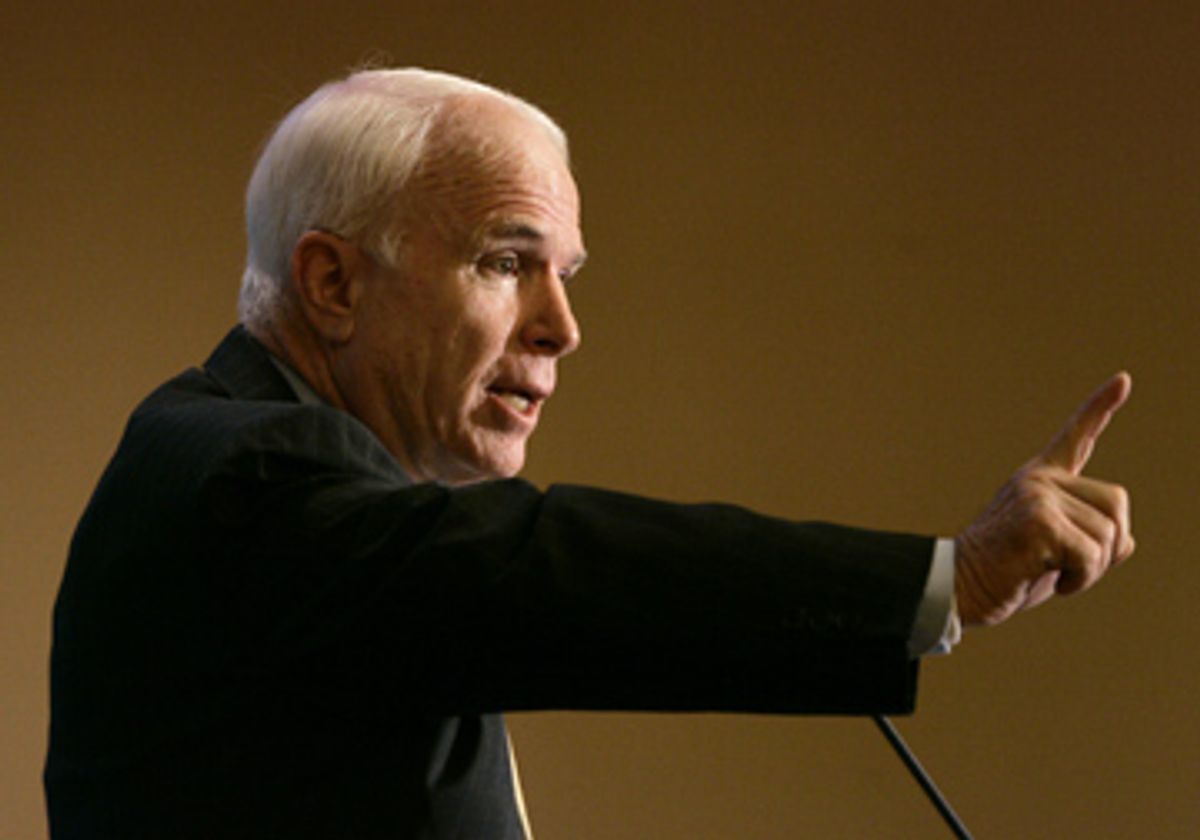 A new prong of conventional wisdom has arisen that the prime reason for the collapse of John McCain's presidential campaign is his vigorous support for the war in Iraq. Arianna Huffington became the latest pundit to spout this reasoning, when she wrote today:

John McCain's cratering campaign is an object lesson in how to kill a candidacy in three simple steps: 1) locate the biggest foreign policy disaster in U.S. history 2) embrace it 3) implode. (Bonus step: spend money like you are Paul Bremmer).

McCain's fate should be a warning to all Republicans seeking office in 2008: continue to back the president's war policy at your own risk.

She goes on to claim that McCain's transformation from front-runner to also-ran occurred when he "decided to go all-in on Iraq, anointing himself head cheerleader for the surge," and that "the effect was similar to tying an anchor to his poll numbers and throwing them overboard."

This is wrong on several levels, and independently, it is a counter-productive theme to be peddling. In fact, the opposite is true: no presidential candidate can possibly hope to win the GOP nomination unless he fervently supports the war in Iraq.

It is not support for the Iraq war which dooms a GOP presidential candidacy, but the opposite: any real questioning of the wisdom of the war or any agitating for withdrawal or opposition to Bush's commitment would immediately and single-handedly destroy the viability of a GOP candidacy. Ask Ron Paul, or Chuck Hagel, or even Sam Brownback, whose flagging campaign has triggered the wrath of the base despite his radical social conservatism as a result of his ongoing questioning of Bush's Iraq policy.

The war in Iraq remains popular with the GOP base. They want to stay and keep waging war. They would immediately turn against anyone who advocated withdrawal or even questioned the wisdom of staying. The Republican Party continues to be the Party of the Iraq War, and -- directly contrary to the conventional wisdom that is arising -- loyal support for the Iraq War is an absolute pre-requisite for winning the nomination.

In fact, the only praise McCain has received over the last several months from the GOP's base is due to his unwavering support for the war. McCain's candidacy is failing not because of excessive support for the Right's war in Iraq; that was the only thing keeping it afloat. Instead, it is due to his excessive deviation from the Right's mandated views -- on torture, on McCain-Feingold, and especially on immigration.

To claim that McCain's unapologetic support of the Iraq War is what destroyed his candidacy is to misapprehend completely the nature of the Republican Party base. What they demand, first and foremost, is unwavering loyalty to the Cause, and that Cause is shaped predominantly by Middle East militarism, beginning with Iraq.

Dispositive proof of how false is this new conventional wisdom comes in the form of the positions of the other leading GOP candidates, who are at least as supportive as McCain is of Bush's policy in Iraq, if not more so. This, for instance, is what Fred Thompson said in March when interviewed by Chris Wallace on Fox News:

WALLACE: What would you do now in Iraq?

THOMPSON: I would do essentially what the president's doing.

And here is Rudy Giuliani, with his best friend Sean Hannity, back in April, mouthing as aggressive a pro-Bush, pro-Iraq war case as he can muster:

HANNITY: Let me ask you. Look, we're watching almost like a game of chicken being played in Washington right now over the supplemental funding bill for the Iraq war and Afghanistan war.

GIULIANI: It's a shame.

HANNITY: Well, Harry Reid literally said today if the president doesn't agree to timetables, that he may go along with Senator Russ Feingold's proposal and defund the war in 120 days.

GIULIANI: It would be a terrible mistake. If the president does what he says he's going to do which is veto the legislation, then -- then they really should pass some kind of a funding mechanism and allow the president to try to get this strategy right with General Petraeus.

It isn't right to kind of reverse the strategy on the president. I understand they have the constitutional authority to do it. I think if they -- if the president vetoes it, he's got -- I don't know if he has two weeks, three weeks, four weeks, five, some number of weeks where he could -- he could continue to fund under existing appropriations. He had the inherent authority to do that.

But then there would come the point where he couldn't. And I think that would just be a terrible mistake for them to do that directly or indirectly.

HANNITY: Have the Democrats become the party of surrender in the war?

HANNITY: But how would you deal with that if you're president?

GIULIANI: Well, I think what they're doing is unprecedented in war. Find me another time that an army or a nation announced their retreat in advance and handed their enemy a written timetable?

I don't think I've ever heard of this before in the history of war. I think it is inherently irresponsible. And it puts the remaining troops who are left behind as you do this kind of sequenced retreat, it puts them in graver jeopardy. . . .

GIULIANI: We have to -- we have to try and get Iraq to a position where it acts as a -- as a help to us against terrorism, rather than an encourager of terrorism.

The strategy of being on offense against terrorism, which I would continue if I was elected as president, and maybe even try to find ways to expand in terms of dealing with Afghanistan, Pakistan, some of the other things, I think these things have to get attention. Iran, we've got to stay on offense.

Giuliani has gone so far as to argue that even if Congress cuts off funds for the war, the President should fund it anyway given how critical it is that we stay (comments he repeated, though diluted slightly, in the Hannity interview). And Mitt Romney long ago touted his unequivocal support for Bush's "surge."

While it is true that the GOP front-runners this weekend began giving themselves more rhetorical flexibility in terms of their views on the "surge," that is clearly being done with an eye towards the General Election, as a means of pretending that they questioned the Bush management of the war. But the idea that war support hurts a GOP candidate's chances in getting the nomination is plainly false, as the vast bulk of the Republican Party continues to support not just the Iraq war, but Bush's specific handling of it. More importantly, meaningful questioning of the war in Iraq would viewed as blasphemy by the GOP base and would not be tolerated.

The Republican Party is still wedded -- they are irreversibly wedded -- to the Iraq War, and it is ill-advised to help them shield themselves from its fallout by claiming that leading GOP presidential candidates are suffering due to their support for that war. That claim is simply false. Many things killed McCain's candidacy among the GOP faithful -- mostly his blasphemies in questioning their orthodoxies. But his unquestioning support for the Iraq War is shared by all of the leading GOP candidates and is an absolute prerequisite for any candidate to get that party's nomination.

Now, I am not an accomplished student of presidential politics, but it has literally never crossed my mind that John McCain's campaign for the Republican nomination has suffered among Republican activists because of his steadfastness on Iraq. I assumed that the two big problems were his amnesty-before-border security position on immigration and sheer mismanagement (the second of which Huffington tosses in as a "bonus" reason).

And John Hawkins at Right Wing News (who doubles as a consultant for Duncan Hunter's campaign):

[N]obody in the top tier of the GOP supports cutting & running or setting a timeline -- so how can that be responsible for killing McCain's campaign?

Ariana (sic) goes on to say that the other candidates have distanced themselves from the surge more than McCain, but the reality is that all of them, McCain, Thompson, Rudy, Romney, and even Newt, have essentially the same position on the war.

If you want to know what has ripped McCain apart, look at the major issue that featured McCain zigging while all the candidates above zagged -- illegal immigration. McCain was one of the primary supporters of the Senate amnesty bill while all the other candidates above opposed it. That has been what has done so much damage to McCain of late with conservatives, not the war.

Tiger Hawk speculates that Huffington's post is motivated by her desire "to push mainstream journalists -- who do read what she writes -- to ask the question, 'did John McCain implode because of his support for Iraq?'" Maybe. But it is difficult to understand why any GOP opponent would want to help that party distance itself from the Iraq war by claiming that it is politically lethal for a GOP candidate to support it or, worse, that the leading GOP candidates are some sort of war skeptics. Aside from being flatly false, that suggestion also seems quite counter-productive.

UPDATE II: Those who want to claim -- based on "impressions" and anecdotes and "feelings" -- that the rank-and-file of the Republican Party has turned against the war must confront actual empirical evidence proving the opposite. It is hard to overstate the distance between the views of the Republican Party on George Bush and the Iraq war and the rest of the country.

From the CBS News poll (.pdf) released at the end of June (Republican responses in yellow):

Republicans overwhelmingly approve of the job Bush is doing (66-23%):

They even overwhelmingly support the way Bush is handling Iraq (59-33%):

There is a huge gap between Republicans who think the surge is working and those who think it is not working (42-5%, with 41% believing it has had no impact):

And the vast majority of Republicans favors either keeping the current troop levels in Iraq or increasing troops levels (60-32%):

Whatever else is true, the Republican Party is not a party where a candidate's pro-war, pro-Bush position will doom the candidacy. Exactly the opposite is true. The GOP remains the Party of Bush and the Party of the Iraq War.