Freeing the iPhone the legal way 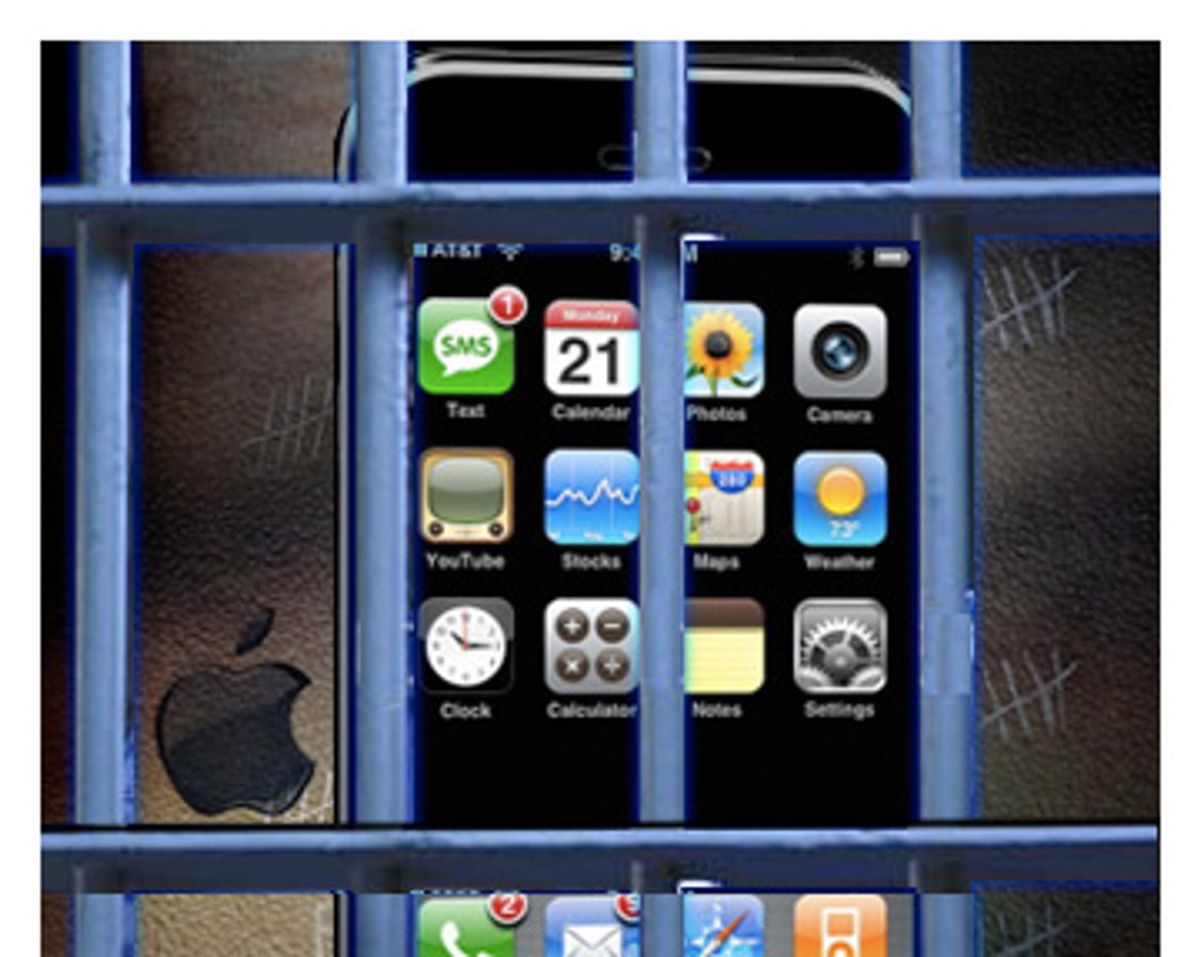 Congressional hearings on telecom policy are rarely lively affairs, but a bona fide celebrity graced last week's meeting of the House Subcommittee on Telecommunications and the Internet: Apple's iPhone. Edward Markey, the Massachusetts Democrat who chairs the committee, began the affair by holding up the phone and hailing its "sheer brilliance and wizardry," noting that "undoubtedly consumers will cherish this device as though it is a part of their family."

But the iPhone, Markey said, "highlights both the promise and the problems of the wireless industry today." The phone sells for full price, yet owners get essentially no rights over how to use it; the phone forces you to sign a two-year contract with poorly ranked AT&T service, at pain of a $175 early-termination fee. "Many consumers feel trapped having bought an expensive device or having been locked into a long-term contract with significant penalties for switching," Markey said. And it's not just iPhone owners. Nobody likes their cell provider; people are sick of the fees, they're sick of the stringent contracts, they're sick of the bad cell signal. But what are you going to do? There are four large cell carriers in the U.S. -- AT&T, Verizon, T-Mobile and Sprint -- and none has customers who are particularly happy.

Over the next couple weeks, I'm going to dig into some of the legal and regulatory issues highlighted by the iPhone's introduction -- the very same issues that Markey's panel, as well as members of the Federal Communications Commission, are now debating. I'll begin with a look at efforts to change the rules -- the stringent contracts that all cell companies force you to sign -- governing what you can do with your phone.

Last week, I wrote about the hackers who are mining deep into the iPhone in an effort to "unlock" it from AT&T's cell network. But in addition to hardware and software, the iPhone, like other cells, is protected by AT&T's and Apple's contracts and by copyright law. If hackers manage to unlock the iPhone, will they have broken the law? If you use their tools to free your iPhone, are you violating some statute? Is it legal to unlock the iPhone -- and, indeed, any cellphone?

The simple answer is yes, it is legal to unlock your cellphone so that it can run on any network -- but there are some catches. In fact, if you delve into the question, as I recently have, you hit upon a difficult truth: The law surrounding unlocking your cell is deliriously complex, and part of a bigger, more hazy set of rules concerning your rights to tinker with any bit of gadgetry that you've purchased and think you own.

The culprit is the Digital Millennium Copyright Act, the far-reaching 1998 law that has been the focus of a great many tech-policy controversies, from Google's plan to scan library books to Diebold's efforts to silence voting activists. Because any cellphone runs software protected by copyright, unlocking it can be seen as circumventing -- that is, illegally accessing -- that copyrighted software.

Last year, Jennifer Granick, an attorney who directs Stanford Law School's Center for Internet and Society, petitioned the U.S. Copyright Office -- the arm of the Library of Congress responsible for administering the copyright system -- to exempt people from DMCA penalties when they try to unlock their phones. She won. The Copyright Office ruled that it's legal for people to unlock their own cellphones. It's also legal to sell or buy a phone that has already been unlocked.

But there's a complication, Granick told me: The Copyright Office only exempted the act of unlocking your phone, not the act of providing tools to unlock all such phones. Thus you may violate the law if you provide software, hardware and perhaps even instructions to help other people unlock their cellphones.

This is the potential danger for iPhone hackers. If a hacker does find a way to free the Apple phone from AT&T's network, she can use that method to unlock her own iPhone. She can also sell that phone to other people. But if she posts an unlocking program online, she might run afoul of the law.

A generous interpretation of the DMCA, then, leaves the iPhone pretty strictly locked up: The only way to safely use the phone on another network is to unlock it all by yourself, or to buy a phone from someone who has unlocked it. If you choose to unlock it on your own, you can use software you find online -- but the person who posted that software might suffer harsh criminal penalties under the DMCA for making such tools available.

The exemption Granick won from the Copyright Office frees people from copyright penalties when tinkering with their handsets, but phones are also protected by business contracts that impose a fee for parting with a wireless carrier. The contracts, mobile companies say, keep down the cost of your service. The theory is that in exchange for a contract, the company can offer you a phone and cell minutes at a reduced price. For instance, if you sign a contract with Wireless Giant Inc., the company might give you a $200 phone for free -- but the firm will turn on software locks and impose an early-termination fee to keep you from ditching the company and using the free phone on some other network.

Many people might consider this a good trade; get a free phone, sign a long-term contract. But as Chris Murray, an attorney at Consumers Union, pointed out at the House hearing last week, wireless companies don't give customers a choice over whether they want to take this deal. You can't offer to pay full price for a handset in exchange for a reduced early-termination fee and an unlocked phone -- no major firm will let you do that. Indeed, in some instances carriers will charge you a fee even when they don't offer you any break on the price of the phone. The iPhone is the primary exhibit: AT&T doesn't subsidize the price of the phone, but you're still locked to a single provider.

I asked Michael Balmoris, an AT&T spokesman, to explain the rationale for the company's early-termination fees. The fee, he said, is meant to compensate "carriers for the customer's failure to satisfy the service commitment on which their rate plan was based." Tom Pica, a spokesman for Verizon, said much the same thing. "When a customer terminates early, the [fee] helps Verizon Wireless make up some of the lost, expected revenue stream upon which its discounted term-contract pricing model was established," Pica wrote in an e-mail. He also noted that Verizon is the only cell provider to prorate its termination fee. The fee starts at $175, but it falls by $5 for each month that you serve of your contract. "For example, if you break your contract after 6 months, your [fee] is reduced by $30, or to $145," Pica said.

I asked AT&T's Balmoris why his firm doesn't prorate its termination fees; he said that customers who don't want to pay such fees can sign up instead for GoPhone, the company's contract-free pre-paid calling plan. But AT&T does not widely advertise this option; it has not publicly pointed out, for instance, that GoPhone is available -- at greatly enhanced per-minute prices -- for the iPhone.

As Erica Sadun of the Unofficial Apple Weblog found out, you can only sign up for it through a kind of hack, by intentionally failing AT&T's credit check. To be eligible for GoPhone, you've got to enter a fake Social Security number into iTunes when you go to activate your iPhone. Then you're presented with four GoPhone iPhone plans, starting at $50 a month for 200 minutes. (The iPhone plans under contract start at $60 for 450 minutes.) Paying extra, though, gives you little greater freedom -- after all, you can't take your pre-paid iPhone to any other network.

"I can get out of a lease for an apartment or a home for about one month's rent," Consumer Union's Chris Murray said. "Why does it take the cost of nearly half a year's service to end my wireless contract?"