Sleepless in the Senate 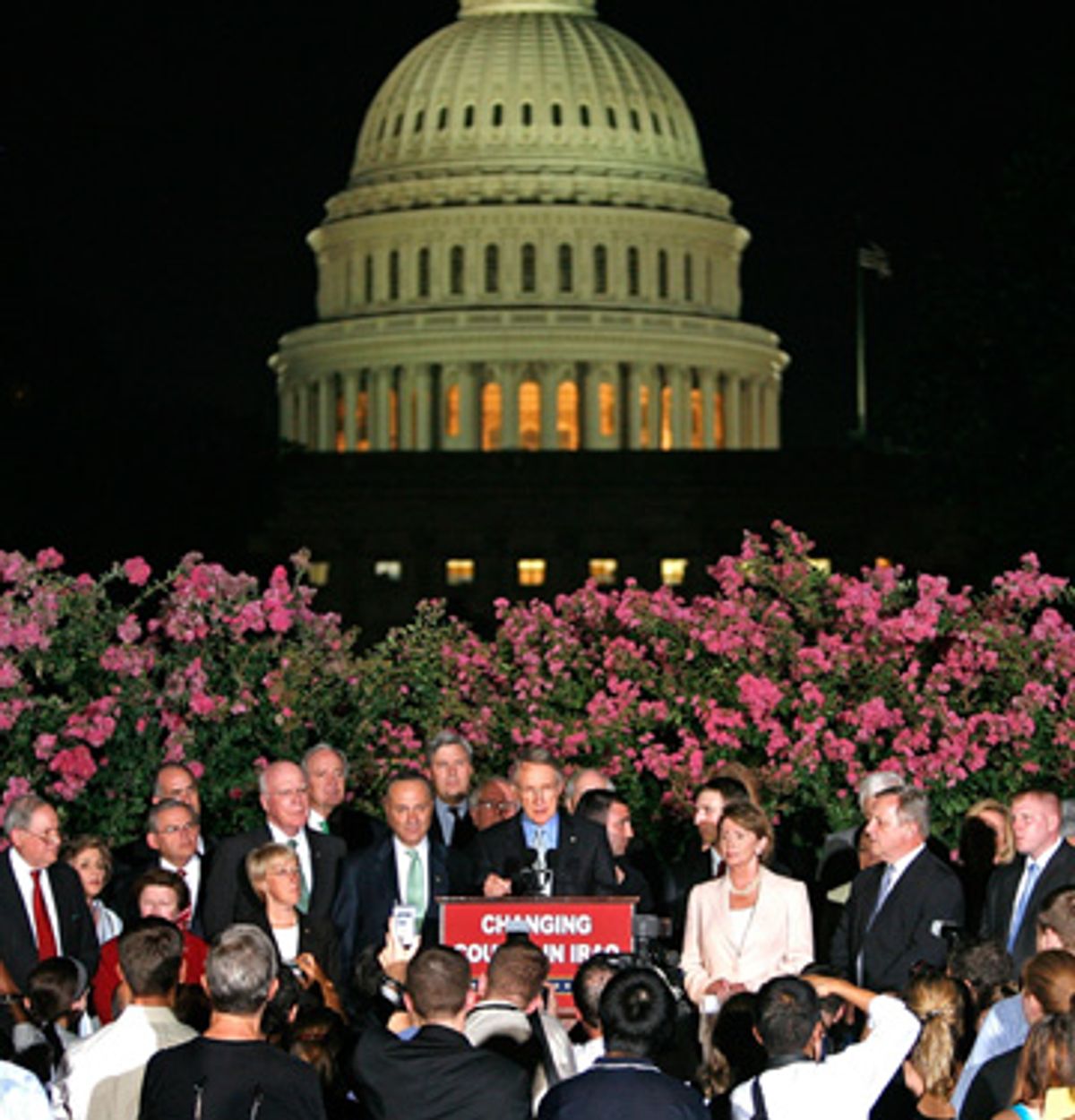 A few hundred protesters carrying tiny electric candles gathered with congressional Democrats under bright white floodlights Tuesday night, in a park across from the U.S. Capitol, to honor the Iraq war dead. "Is this the candlelight vigil?" asked a newspaper photographer, who showed up late. "Just like the Democrats to fuck it up."

He was upset about the lighting, which allowed the event to be broadcast by television cameras, but ruined his pictures, since it's difficult to shoot a candlelight vigil if you can't see the candlelight. But he was missing the point. This event was just one part of a 20-hour, all-night spectacle staged by the Senate Democratic leadership to call attention to Republican obstruction of efforts to end the Iraq war. As it stands, Democrats don't have the votes to force the president's hand on the war. So they had launched an appeal to the television cameras with an all-night talkathon. The floodlights trumped the candles.

In a great mob, the Democratic leadership of the House and the Senate, about two dozen lawmakers trailed by as many reporters, walked across Constitution Avenue to address the protesters. "It's dark now in Washington," said Majority Leader Harry Reid at about 9 p.m., even though the park plaza was light as day. "It's dawn in Baghdad." He asked the crowd to observe a 15-second moment of silence in honor of the troops. Then he faced the cameras. "I want everyone here tonight, every American from coast to coast, to know we won't stop fighting until we end this war," Reid thundered.

That didn't mean that a change in policy was imminent. A moment later, Reid made clear that his decision to keep the Senate awake all night was a symbolic effort to put more pressure on Republicans and declare the Democratic commitment to the issue. "We know this debate won't end the war in Iraq," he said.

The last time the Senate stayed up all night was in November of 2003, at the behest of Tennessee Republican Bill Frist, then the Senate majority leader, who was protesting the Democratic filibusters of some judicial nominees. At the time, Frist was openly contemplating the so-called nuclear option, a parliamentary maneuver that would have upset nearly a century of Senate precedent, which holds that the assent of 60 senators is required to call a vote on an issue. Reid, who was then the minority whip, was so incensed by the threat to Senate tradition that he staged his own filibuster, seizing the Senate floor for nine hours to read from his own book about the history of his hometown, Searchlight, Nev.

A couple of hours later, Republicans forced Democrats to stay all night. To help reporters pass the time, Frist sent a case of Rolling Rock beer up to the press gallery. Cots were laid out in offices, and Republican senators held periodic press conferences in the pre-dawn hours. This time, the stakes were considerably lower. Democrats had no intention of junking Senate rules, leaving the outcome all but certain. On Wednesday morning, at about 11 a.m., a vote to move forward with a bill that would require a U.S. withdrawal from Iraq by next spring failed as expected. The vote garnered 52 votes, short of the required 60.

But the cots returned, anyway, laid out with mismatched sheets in the Lyndon Baines Johnson room for anybody to use. Reid's office sent their Republican counterparts a package of toothpaste, a toothbrush and Speed Stick deodorant, with a note that read, "A few supplies for your sleepless nights." Someone left carrots and celery in the press gallery.

On the floor, Democrats and Republicans politely took turns lambasting each other's motivations and policy positions. "This is not a stunt," snapped Sen. Mary Landrieu, D-La. "This is not Hollywood."

"It does seem to me that this is all about a political circus," Sen. Jim DeMint, R-S.C., had said earlier in the night. "The fact is that this is about winning elections." For good measure, he added that Democrats are "weak on defense." Sen. Susan Collins, R-Maine, held up a copy of the Iraq Study Group report, pleading for a moderate approach to Iraq. Sens. Bob Menendez, D-N.J., and Sherrod Brown, D-Ohio, spoke next to a giant blue poster that read in white letters, "Let Us Vote."

Occasionally, senators crossed party lines. Sen. Chuck Hagel, R-Neb., spoke passionately about the need to end the war. A few hours later, Connecticut's Sen. Joe Lieberman, Democrat turned independent, stood up to quote at length from the writings of al-Qaida's senior leadership. He promised to help block a vote on the withdrawal bill, and characterized his fellow Democrats as caught up in the "political passions of the moment." "This is a deadline for American defeat," he said, "one that we will pay for I fear for generations to come."

By the time daybreak came, nothing had changed in the Washington politics of Iraq. Only four Republicans -- Hagel, Collins, Oregon's Gordon Smith, and Maine's Olympia Snowe -- joined the Democrats at 11 this morning when Reid finally ended the talkathon and called for a vote on proceeding with the withdrawal measure. But Democrats retained hope that their message had been sent to the American people. With polls in their favor, the majority leaders in Congress have no interest in taking the pressure off President Bush. If they can't win in Congress, they can at least stake their claim to the issue. As the civil rights leader Rep. John Lewis, D-Ga., called out to the well-lighted vigil on Tuesday night, the Democratic position has solidified into a clarion call.

"Every month, every week, every hour, every minute, every second, every moment that another young man or woman is killed," he said, "then the blood is on our hands, all of our hands."