John Travolta is no Divine. And this shiny musical just doesn't have the crazy, messy charm of John Waters' original. 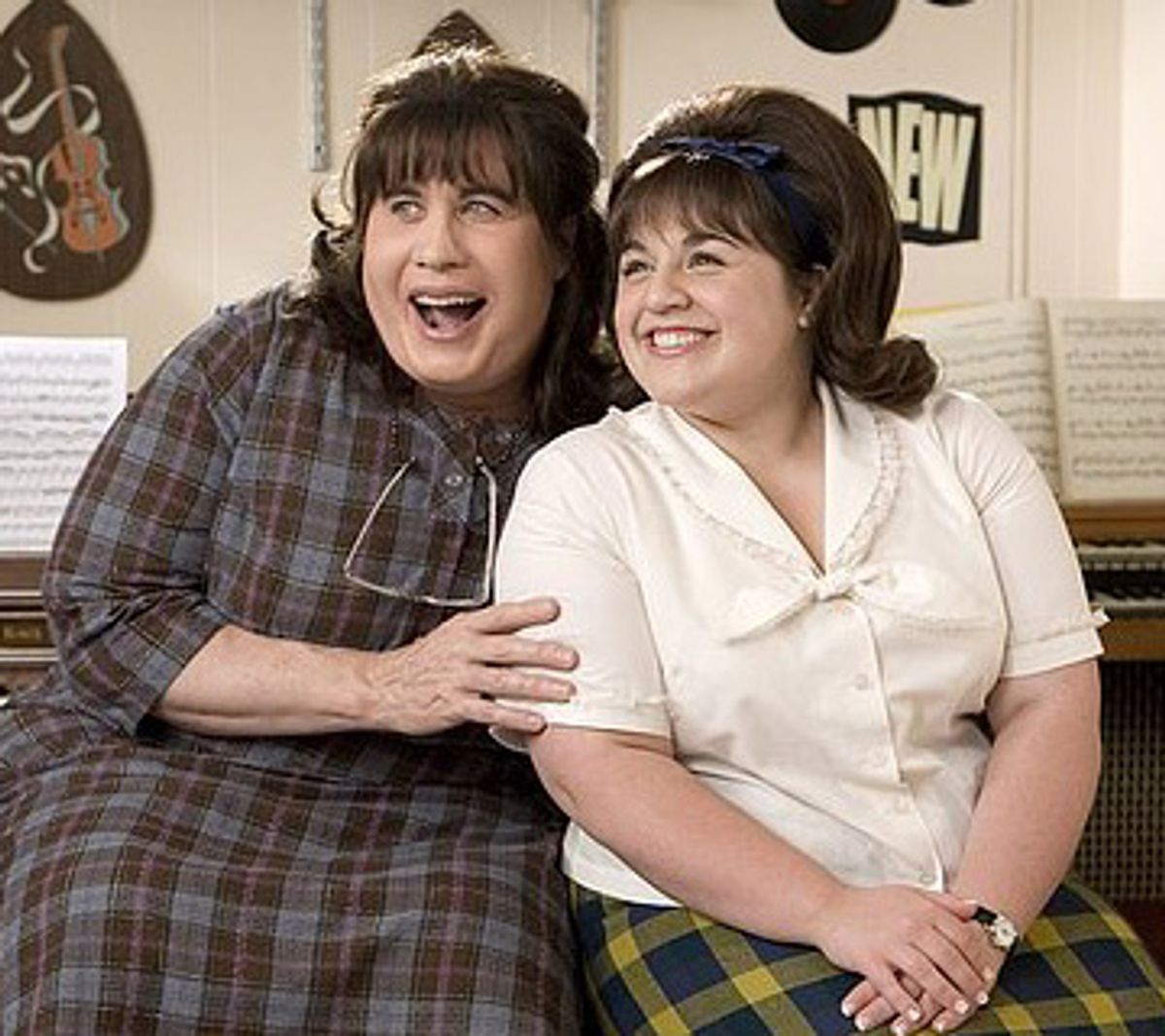 I occasionally receive scolding letters from readers when I compare, unfavorably or otherwise, a recent movie with an older one, particularly if the earlier one isn't a picture they've seen or even heard of. Some people believe critics ought to go into each new picture with the gooey, unfocused eyes of a newborn, the better to blink in wonder at the magic and awe before us. Some of those people have never had to sit through a Nick Cassavetes movie, but never mind: The gist of that logic, I think, is that experience is the enemy, while blind innocence is king. In other words, critics who don't turn themselves into willing amnesiacs, cheerfully erasing everything they've seen before, are doomed to become jaded creatures who enjoy nothing.

So maybe it's necessary to go into Adam Shankman's "Hairspray" -- an elaborate, enthusiastic movie musical based on a Broadway musical, which was itself based on John Waters' sweetest and most entertaining movie -- pretending that a performer as beautiful, and as magnificent, as Divine never existed. But is that even possible? In Waters' 1988 movie, the late Divine played Edna Turnblad, the mother of the socially conscious "hair-hopper" hero, Tracy (originally played by Ricki Lake). Divine's Edna, her arms emerging from her drab, sleeveless housedresses like pudgy sausages, wasn't realistically feminine; if you walked into "Hairspray" cold, you wouldn't for a minute be fooled into believing that this he was really a she. Even so, femininity hovered around Divine's Edna like a cloud of Shalimar. And by the time she emerged with Tracy, post-makeover, from Mr. Pinky's big-gal store Hefty Hideaway, her feet stuffed into dainty pumps, her hair swept up into a monster-truck tousle of curls, suspension of disbelief was no longer necessary. Divine -- whose real name was Glen Milstead -- was more woman than most men could comfortably handle.

Shankman's new "Hairspray," of course, has no Divine, and John Travolta, looking believably pretty and sweet under layers of fondant Latex, is a wholly different incarnation of Edna. And he's not bad. But that right there is the problem with "Hairspray": It's all so "not bad" that it isn't nearly enough, even when Shankman and his cast work hard to send it soaring over the top. Waters is the least subtle of directors, and the meaning of his movie rang out loud and clear enough to dissolve the ozone layer: In Baltimore of the early 1960s, integration had to happen, obviously for humanitarian reasons, but also to save white kids from being doomed to eternal squareness. Waters' optimism, his faith in human beings, is rooted in a sturdy practicality: He suggests that our motivation for changing the world can begin with a single dance step.

Waters' "Hairspray" was also, of course, a lot of fun, which made it good source material for Broadway. Although I live in New York, I see a musical only once every four years or so: The tickets are expensive, and I can't bear the aggressive desperation of most of these shows, the vibe emanating from the actors and even from the sets that works overtime to reassure me that I really am being given a lot of fun for the money I've just shelled out. I saw "Hairspray" on its opening night (I was fortunate enough to be able to tag along with a friend who had press tickets), and while Harvey Fierstein's Edna Turnblad had enough cranky wit and personalized style to keep me from mourning Divine, and the songs were relatively free of that lacquered show-tuney quality that makes so much show music unbearable, I still couldn't help feeling that the Waters version, with its shoestring-budget aesthetic, its wear around the edges, its resolute unshininess, was infinitely better.

The new movie version of "Hairspray" at least has the virtue of being a democratic entertainment: You can take your whole family to see it without bankrupting yourself; the same couldn't be said of the Broadway show. The picture has a quiet, muted glow -- it doesn't make the mistake of going for garishness. (The cinematography is by Bojan Bazelli; and, for what it's worth, although the story is set in Baltimore, the movie was shot in Toronto.) In its first half, at least, there are enough sharp, clever moments to suggest that the filmmakers (the screenplay is by Leslie Dixon, adapted from Waters' original story and Mark O'Donnell's musical version) took some care in adding detail to Waters' original instead of just leeching off it. One of my favorite moments is a shot of two heavily pregnant women in beehive hairdos, perched on bar stools and smoking up a storm as they hoist martini glasses in the air.

But this "Hairspray" does take significant liberties with Waters' plot, and when those changes start to kick in, about two-thirds of the way through, the picture begins to feel more pedestrian and less exhilarating -- even as it continues its trajectory of exhausting peppiness. Here, as in the original, Tracy Turnblad is an upbeat, intensely likable teenager whose chubby physique is more a strength than a liability: A tiny body just wouldn't be right for that big personality. (Tracy is played by newcomer Nikki Blonsky, who brings the right kind of vivacious confidence to the role -- she's never guilty of overtwinkling.)

Tracy may not have the "perfect" body of her classmates, but she's a better, hipper dancer than all of them, and her dream is to land a slot on an afternoon teen dance program, "The Corny Collins Show." (Corny, the ingratiating but weirdly appealing host, is played by James Marsden.) Mom Edna tries to discourage Tracy from pursuing that dream -- she doesn't want to see her daughter disappointed. But her father, Wilbur (Christopher Walken), urges her to go for it, and she does manage to make it onto the show, a development that angers Velma Von Tussle (Michele Pfeiffer), a former Baltimore beauty queen who fears Tracy's bold personality will outshine that of her own daughter, the bitchy blond Amber (Brittany Snow).

Velma also wants to make sure that both the show and the city she lives in will remain safely segregated. Young people of color are allowed on the show only once a week, on "Negro Day," the day on which the show is hosted by a local R&B diva named Motormouth Maybelle (Queen Latifah). Tracy, who has befriended Maybelle's charming, smooth-talking son, Seaweed (Elijah Kelley, in a marvelous, perfectly tuned performance), is determined to integrate "The Corny Collins Show" -- a goal that means even more to her than earning the love of the dreamboat white guy she has a crush on, Link Larkin (Zac Efron).

Waters, always one to add rather than subtract, made his story crazier than it had to be. But that was part of its charm. Shankman's "Hairspray" streamlines the story considerably, doing away completely with some of its nuttier, more memorable elements: There's no ticking-time-bomb beehive here. And when Tracy organizes a desegregation march, Link, instead of simply joining in (as in Waters' original), makes a dud of a speech about having to opt out, lest he lose his big chance to become a star. The writers apparently thought they needed to add some tension to the story, and to the relationship. But in the loopy idealism of Waters' original, this whitest of white kids wouldn't even hesitate to join a desegregation march.

In some places, "Hairspray" is admirably bold; in others, it's just aggressively broad, embroidering its "segregation is wrong" message with unnecessary extra threads. The musical numbers (Shankman also did the choreography) are well staged; they're lavish without being too cluttered. And most of the songs (written by Marc Shaiman and Scott Wittman) at least have words and melodies that allow for singing as opposed to belting. (The songs have none of the gleaming, offensive whiteness of those in "Dreamgirls," a show that's ostensibly about black music but appears to have been written by people who've never heard of Otis Redding or Marvin Gaye -- let alone the songwriting team of Holland Dozier Holland.)

But even though it would be impossible to sit through "Hairspray" and miss its antiracist sentiment, we still get a very serious Sam Cooke-style musical number, sung by Latifah, set against a candlelit anti-segregation march. The filmmakers may believe they're adding an extra layer of seriousness to the material. But the casual obviousness of the movie's visual and verbal jokes -- even the way the black kids are required to dance in a separate, roped-off area on Negro Day -- is precisely what makes them effective. The inclusion of this big production number only suggests that the filmmakers fear the audience won't get the movie's message unless it's spelled out for them.

"Hairspray" has plenty of fine individual moments: Walken -- who began his career as a Broadway chorus boy -- gets a rare song-and-dance routine. Jerry Stiller, who played Wilbur Turnblad in Waters' original, appears as Mr. Pinky here, and although he doesn't have much to do, it's still wonderful to see his face. Pfeiffer, an ice princess frozen in time, shimmies her way through a slick, sharp production number. Waters himself has a cameo as the town flasher -- and what's not to love about that?

"Hairspray" is reasonably entertaining. But do we really need to be entertained reasonably? Waters' original was a crazy sprawl that made perfect sense; this "Hairspray" toils needlessly to make sense of that craziness, and something gets lost in the translation. But the one thing that's truly wrong with "Hairspray" isn't the fault of the filmmakers: It simply has no Divine. Still, her ghost, dressed in a muumuu of moonlight, insists on shimmering over the proceedings. It's little wonder everything below her pales in comparison.