The presidential hopeful with the longest, most varied r 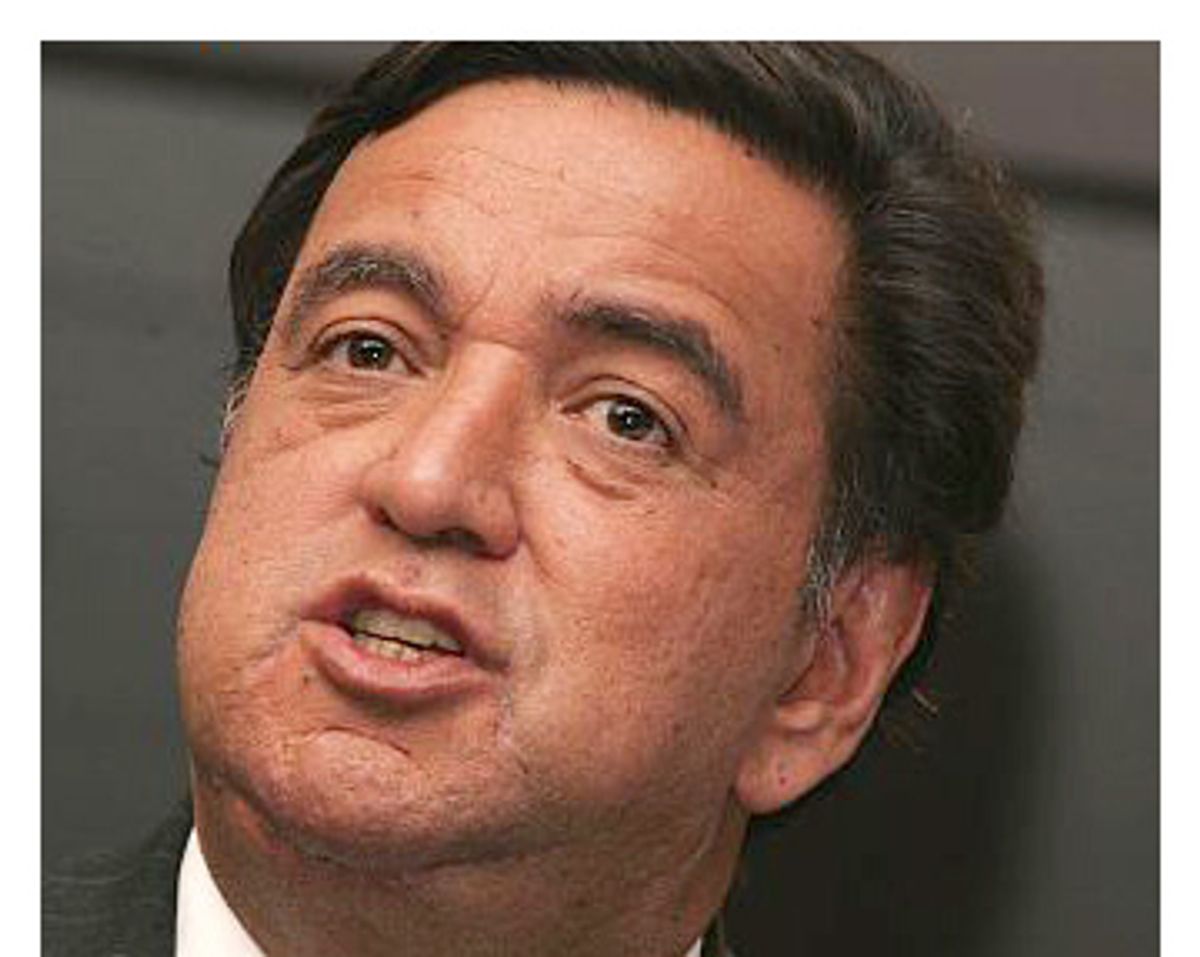 Sounding like every underdog contender who has ever tried to defy the groupthink of the press corps, Richardson told a jury of primary voters here Tuesday afternoon, "I'm glad you're picking the next president -- and not the pundits in Washington, who have already made up their minds based on who has the most money and who has the most glamour."

Dressed in a blue blazer, khaki slacks and a red tie, Richardson was speaking in the recently restored local courthouse and a chunk of his mostly gray-haired audience of about 60 voters was sitting in the jury box. As the Democrat with the longest and most varied résumé in the race (14 years in the House, stints as U.N. ambassador and energy secretary in Bill Clinton's second term, and New Mexico governor since 2003), Richardson is beginning -- just beginning -- to get a long, serious look from voters already a trifle bored with Hillary Clinton versus Barack Obama.

Richardson, the first major presidential candidate of Hispanic heritage, has been overshadowed by the history-making appeal of Hillary Clinton as a woman and Barack Obama as an African-American. With $7 million in the bank, he is running fourth in the Democratic dollar derby. His campaign themes are a bit of a blur, since he freely confesses in an interview with me, "I admit that I don't have my shtick down. I admit that my policies are evolving." But what Richardson -- the rare round-faced presidential candidate in an arena traditionally dominated by those with lean and hungry looks -- offers is the easy self-confidence of someone who believes that success comes from doing what comes naturally.

This week, for the first time, the respected Granite State Poll, sponsored by CNN and WMUR, put Richardson in third place (10 percent support), just ahead of John Edwards and Al Gore (tied at 8 percent), giving the New Mexico governor new bragging rights. But the most relevant number by far in the poll -- and another statistic that can only give Richardson hope -- is that 64 percent of New Hampshire Democrats say they are "still trying to decide" on a candidate.

"Richardson is an interesting person to keep watching," said Andy Smith, the director of the Survey Center at the University of New Hampshire, which conducted the poll. "We're all looking for a third candidate to pop up here -- and John Edwards was going to be the one. But his campaign isn't working here." Part of Richardson's newfound appeal flows from the quirky job-interview commercials that he has been airing on WMUR, the dominant TV station in the state. In the most recent version, Richardson boasts about his record of promoting alternative energy in New Mexico while a bored executive recruiter asks, "If you were a tree, what kind of tree would you be?" Smith stresses that the candidate's slowly rising poll numbers are not due to the ads alone: "Richardson is an old-fashioned grab-and-greet guy -- and the ads have begun to resonate because they give a sense of who he is."

On an ideological grid, Richardson defies easy labeling, since he has gone from his initial support of the Iraq war to being an outspoken anti-warrior. Richardson is the only mainstream Democrat (aside from Chris Dodd) in the race who favors a complete withdrawal from Iraq, leaving no residual forces within the country. But when the subject turns to domestic issues, it would be more accurate to portray Richardson closer to the right flank of the party. As a Western governor, he is skeptical of most forms of gun control. Asked about the issue at a house party on the shores of Lake Winnipesaukee in Wolfeboro Tuesday morning, Richardson grimaced comically and then said, "Full disclosure -- the National Rifle Association has given me an 'A' rating."

In Ossipee, he bragged about his support for a balanced-budget amendment to the Constitution, a rigid straitjacket on spending that Bill Clinton and most leading Democrats opposed in the 1990s. And, presumably contrasting himself with Edwards, who is running as an economic populist, Richardson declared, "I'm also a Democrat who does not believe in class warfare. I'm not going to rail against rich persons. That's not me. I believe that we should have a pro-growth economy."

Part of the Richardson difference is that he will say things -- human things -- that would never emerge from the lips of a programmed candidate. He lost his train of thought when discussing immigration in Ossipee and asked his audience helplessly whether he had promised that he had four points or five points. After a woman in the front row shouted, "Five," Richardson said ruefully, "My mind is mush. My five-point plans become four-point plans." It is quite possible that in the annals of presidential campaigns no serious candidate has -- ever, ever -- uttered those four words: "My mind is mush." Although Richardson has yet to achieve enough liftoff to be shadowed everywhere on the campaign trail (I was the only reporter in Ossipee), it is so easy to imagine how that self-deprecatory moment would look -- taken out of context -- on YouTube.

Dave Contarino, Richardson's campaign manager, acknowledged that his candidate is not a message-machine candidate ordered up from Central Casting. As Contarino put it, "The secret to the governor's success -- and as his chief of staff I was watching how things got done -- is that he's prepared, but he isn't terribly cautious in what he says. He's not talking off a set of talking points. But a cautious guy couldn't walk into the Sudan, Iraq or North Korea and come back with hostages."

For Richardson himself, it all comes down to that magic quality called "authenticity." During our interview -- both of us sitting on wooden chairs behind a door marked "Judge" in the old courthouse in Ossipee -- Richardson would lean toward me for emphasis, always maintaining eye contact. Asked about his speak-first style, Richardson said, "That's who I am ... I believe that there is a real thirst in the electorate for authenticity."

The New Mexico governor's do-your-own-thing spontaneity can lead him to blurt out new policy ideas in the middle of televised debates. During the second Democratic face-off in early June, he suddenly suggested -- in the midst of a discussion of pressuring China over Darfur -- that some sort of protest of the 2008 Olympics in Beijing might be considered. During our interview, Richardson acknowledged that the idea had come to him "right there, onstage." But when I asked Richardson a follow-up question about a possible Olympic boycott, he said with a hint of exasperation in his voice, "But I'm not running on that. I throw that out as an option." Most presidential candidates would not use a TV debate as the moment to spontaneously prepare an options memo.

Richardson can also be surprisingly thin-skinned. In the midst of a discussion of a noninflammatory topic (his opposition in the Clinton Cabinet to congressional earmarks in the energy bill), Richardson suddenly launched an attack on an earlier Salon piece and its author, Washington correspondent Michael Scherer. (Any reader who wants to decide whether Scherer is "an idiot," as Richardson intemperately claimed, should read the original piece.) But there is a much larger question here -- one that has nothing to do with Richardson's brief spat with Salon. All Democratic candidates not named Hillary or Barack are entitled to be a bit irked with the tenor of the coverage of the presidential race. Six months before the New Hampshire primary is far too premature to decide that the field has been effectively winnowed down to just two candidates.

Surprises are an integral part of every presidential cycle. And Bill Richardson -- the only candidate who has recently caught a fresh breeze -- has earned the right to his fantasies about confounding the pundits and defying the conventional wisdom.