The president has issued an executive order to stop the CIA from using torture, but the ban is unenforceable. 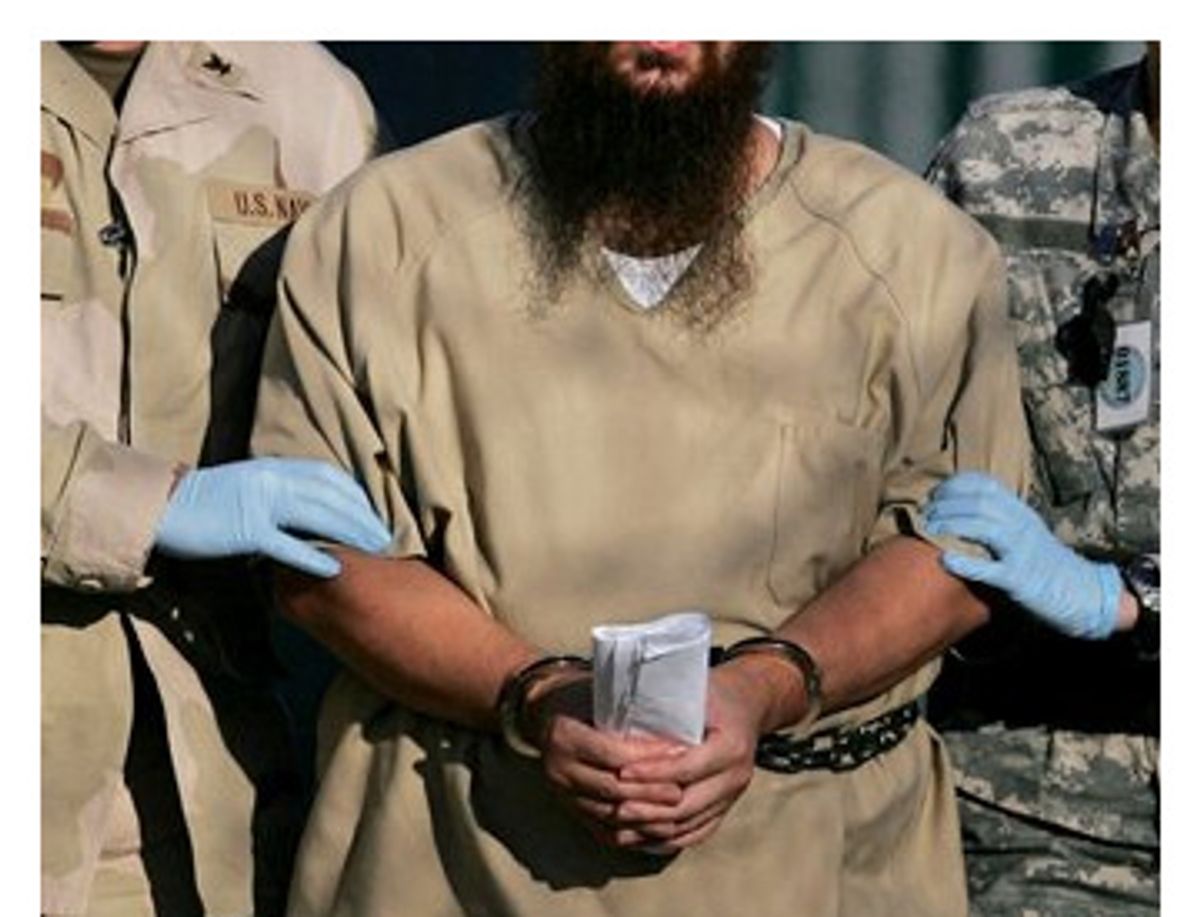 Once upon a time, a U.S. official's condemnation of torture was a statement of moral principle. Today, it is an opportunity for obfuscation. We have learned that when President Bush says, "We don't torture," it's important to read the fine print. So it was once again on July 20, when Bush issued a long-awaited executive order purporting to regulate interrogation tactics used by the CIA in the "war on terror." According to a White House press release, the order provides "clear rules" to implement the Geneva Conventions governing treatment of detainees in wartime -- rules the administration insisted did not even apply to the "war on terror" until the Supreme Court ruled otherwise last summer. But while the new rules reflect a significant retreat by the administration from its initial torture policies, they are anything but "clear," come far too late in the day, and in any event are unenforceable.

The executive order prohibits the CIA from using torture and cruel, inhuman and degrading treatment, sexual abuse, denigration of religion and serious "acts of violence" in its interrogations. While one might have thought that the impermissibility of such tactics in official U.S. interrogations would go without saying, it has not been so since 9/11. This is an administration that narrowly defined "torture" to permit the use of sexual abuse, stress positions, injecting suspects with intravenous fluids until they urinate on themselves, prolonged sleep deprivation, exposure to extreme heat and cold and "waterboarding," i.e., simulated drowning. This is an administration that adopted as official legal policy the counterintuitive and deeply immoral position that international law's ban on "cruel, inhuman and degrading treatment" did not apply to foreigners held by the U.S. outside U.S. borders. And this is an administration that opined that the president could order torture itself if he so chose as a way of "engaging the enemy," notwithstanding a federal criminal statute and ratified treaty banning torture under all circumstances, including war.

In light of that history, an executive order that categorically bans torture and cruel, inhuman and degrading treatment is a significant step in the right direction. And make no mistake -- the administration would never have taken this step of its own accord. President Bush was forced to act by a combination of the Abu Ghraib photographs, international and domestic condemnation of the administration's torture tactics, Congress' overwhelming and veto-proof repudiation of the administration's interpretation of "cruel, inhuman and degrading treatment," and the Supreme Court's rejection of the contention that the Geneva Conventions do not apply to the conflict with al-Qaida.

But how much of a step the administration has really taken remains a serious question. The actual tactics the CIA is authorized to use remain classified, based on the bogus claim that agency interrogators need to keep detainees guessing about how far they can go in order to interrogate effectively. The Army, by contrast, has set forth for the world to see the specific tactics its interrogators can employ -- in the Army Field Manual. And of course, it is black-letter law that no use or threat of physical force is permissible for state and federal police interrogations. Yet both the Army and domestic police obtain useful information from interrogations every day. The limits do not need to be secret for interrogation to be effective.

While the executive order flatly forbids torture and cruel, inhuman and degrading treatment, its failure to specify permissible and impermissible techniques seems designed to leave the CIA wiggle room. A prohibition on "acts of violence," for example, applies only to those violent acts "serious enough to be considered comparable to murder, torture, mutilation, and cruel or inhuman treatment," as defined by the Military Commissions Act. The MCA, in turn, limits "cruel and inhuman treatment" to the infliction of bodily injury that entails: "(i) a substantial risk of death; (ii) extreme physical pain; (iii) a burn or physical disfigurement of a serious nature (other than cuts, abrasions, or bruises); or (iv) significant loss or impairment of the function of a bodily member, organ, or mental faculty." In other words, the president's order appears to permit cutting or bruising a suspect so long as the injury does not risk death, significant functional impairment or "extreme physical pain," an entirely subjective term.

Similarly, the order prohibits "willful and outrageous acts of personal abuse done for the purpose of humiliation or degrading the individuals in a manner so serious that any reasonable person, considering the circumstances, would deem the acts to be beyond the bounds of human decency." But this implies that it is permissible to inflict any abuse that is willful but not outrageous, or that is done for a purpose other than humiliation or degradation, or that a single reasonable person might consider within the bounds of decency under the circumstances. Whatever else one might say, these are hardly "clear rules."

The executive order's most revealing words come at the end. Its final section states that the order creates no rights enforceable by any victim against the United States or its employees, while expressly offering CIA employees a defense against any attempt to hold them liable for abuse. The ultimate purpose of the law, in other words, is to protect the potential perpetrators, not the potential victims.

Nor is there any mechanism for enforcement outside the courts. The International Committee for the Red Cross ordinarily monitors treatment of detainees, and this oversight has historically been a critical safeguard against abuse. But this order applies to interrogation at CIA "black sites," secret prisons into which suspects are "disappeared" for years at a time, and from which the United States has barred the Red Cross or any other outside monitor. "Disappearances" are themselves a fundamental violation of international human rights, in large part because they facilitate abuse, yet this order allows that practice to continue unabated.

With a different administration and a different history, one might be less inclined to read President Bush's latest executive order so skeptically. But this administration has shown repeatedly that it approaches the prohibitions on coercive interrogation the way a particularly creative tax lawyer might treat the tax code. Instead of striving to uphold what we thought were our country's moral principles, the Bush administration seeks to exploit every loophole it can find or manufacture. As a result, the administration has lost the trust of the nation and of the rest of the world. Executive orders like this one are not likely to win it back.