The White House hints at military action as the terror organization regroups in northern Pakistan and the Musharraf government begins to wobble. 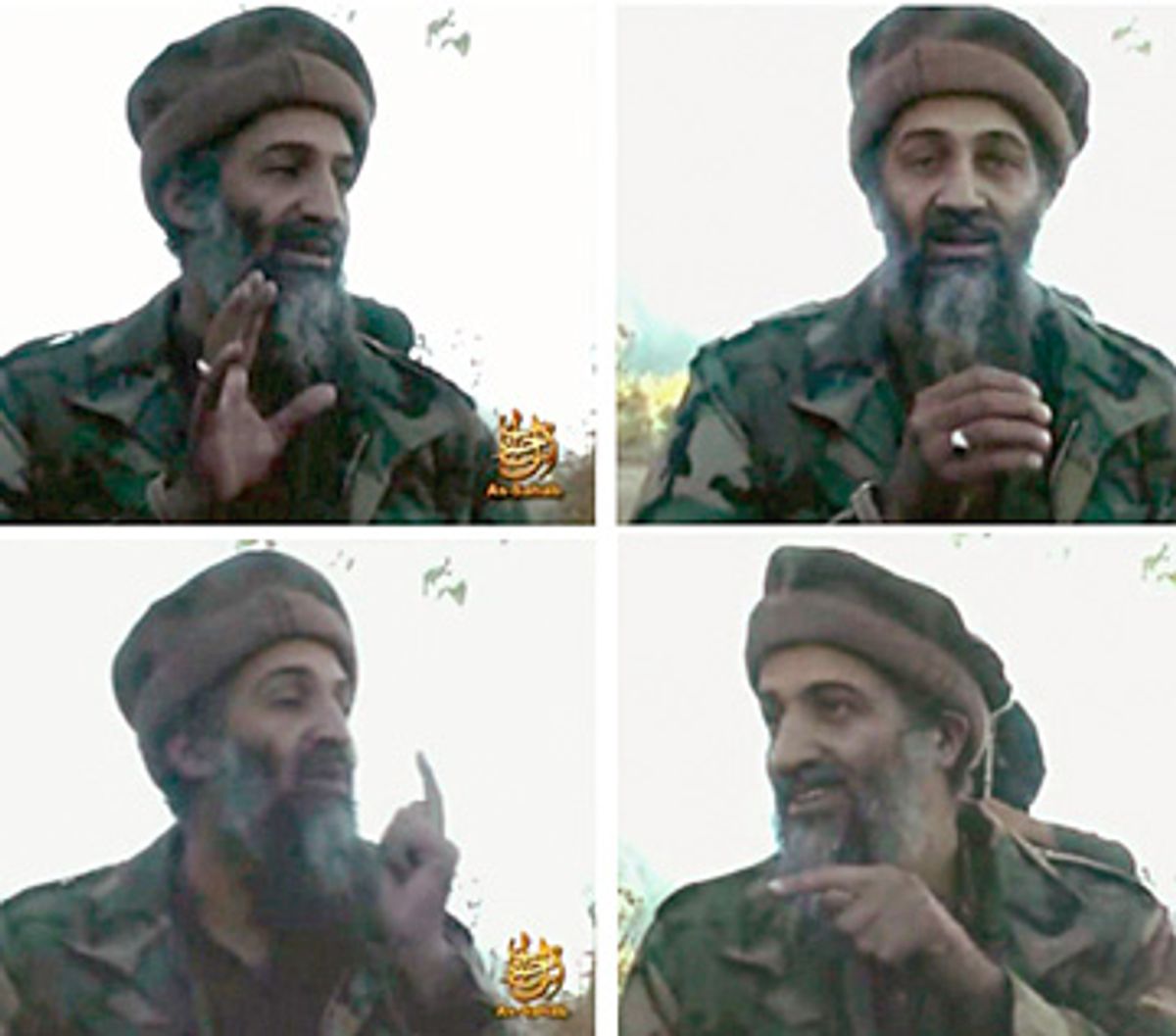 In the past week, worrying signs of a resurgence of al-Qaida surfaced in cyberspace, in Pakistan and in Washington, D.C. The Pakistani military's invasion of a major mosque and seminary complex in the country's capital set off an unprecedented, violent wave of protests and car bombings in the north of the country. A new National Intelligence Estimate warned that al-Qaida was reconstituting itself in those very areas of northern Pakistan. A U.S. threat to send Special Forces into Pakistan in search of al-Qaida roiled relations with the weakened Pakistani president, Gen. Pervez Musharraf. And a new videotape of Osama bin Laden surfaced.

In a videotape that CNN characterized as having been "intercepted," excerpts of which appeared on an anti-terrorist Web site last week, a grayer bin Laden appears in fatigues against a mountainous backdrop, arguing that the Prophet Mohammed himself wished for martyrdom. In reality, though the Prophet had been prepared to sacrifice his life to defend the early Muslim community, he forbade suicide. Before the 1980s, there had never been a suicide bombing in the Muslim world; the technique was pioneered by the Marxist (and largely Hindu) Tamil Tigers in Sri Lanka. Bin Laden's little sermon was intended to hijack the Prophet and Islam for the purposes of al-Qaida.

But the very fact that bin Laden could still deliver his poisonous message to the Muslim world six years after his attack on New York and Washington killed some 3,000 people is first and foremost a remarkable testament to the incompetence and fecklessness of the Bush administration. The tape, the new NIE and events in Pakistan and Afghanistan all suggest that, shockingly, al-Qaida is more deadly now than at any time during the past half-decade.

The new National Intelligence Estimate, released early last week, said that al-Qaida "has protected or regenerated key elements of its Homeland attack capability" inasmuch as it had once again set up a safe haven in northern Pakistan and was reassembling its top leadership. The Iraq war and the success of Salafi jihadis in fighting the U.S. there have, moreover, allowed bin Laden's organization "to recruit and indoctrinate operatives, including for Homeland attacks."

Meanwhile, events in Pakistan show a pro-American dictatorship shaken by demonstrations of fundamentalist Islamic power. President Musharraf has long been a linchpin of the Bush administration's "war on terror."

Musharraf had made a truce with the tribes of the Federally Administered Tribal Areas in Pakistan's northwestern region, where al-Qaida remnants are thought to be hiding out. These vast, rugged regions along the Afghan border have defied central government control throughout history. Even the British Empire at its height never subdued them.

The truce came after the Pakistani military had suffered significant casualties in fighting in the region. Emboldened by Musharraf's seeming retreat, militants of the neo-Deobandi school of radical theology came from the north and established themselves in the Red Mosque and seminary of the capital, Islamabad, seeking to impose themselves as a sort of local Taliban-style morals police. They eventually turned violent, capturing police on May 19, and then taking Chinese acupuncture workers captive on June 23, forcing Musharraf's hand. The subsequent invasion of the mosque and seminary on July 10, which left over 100 dead, outraged other Deobandis in the Pashtun areas of the north, provoking thousands to demonstrate in the North-West Frontier province.

Since the government's seizure of the mosque, dozens of people in the north have been killed by suicide bombers targeting Pakistani security forces. Angered by the government invasion of the mosque and military crackdown in the north, Waziristan tribal leaders canceled their truce with Islamabad on July 15. On Monday, the Pakistani military said it had killed 35 militants near the Afghanistan border in renewed clashes that also left two Pakistani soldiers dead.

And now the U.S. seems to be thinking about operating in the same area. Mike McConnell, U.S. director of national intelligence, said Sunday on NBC television of bin Laden, "My personal view is that he's alive, but we don't know because we can't confirm it for over a year ... I believe he is in the tribal region of Pakistan." Pakistani authorities angrily denied the assertion.

McConnell's comments came in the wake of earlier remarks by Frances Townsend, Bush's homeland security advisor, who, when asked if U.S. Special Forces might go into Waziristan in search of Bin Laden, replied, "There are no tools off the table, and we use all our instruments of national power to be effective."

In the best of times, hunting down an individual in Pakistan's tribal areas would be rather like trying to find a person moving among safe houses in Wyoming, Colorado and Nevada. The current unrest would only make the job of any U.S. Special Forces operating in the region that much harder. But the de facto American threat to invade Pakistan also brought an alarmed reaction from the Musharraf regime. On CNN, Foreign Minister Khurshid Mehmood Kasuri angrily pointed out that Pakistan had sacrificed 700 troops to the fight against extremists in the tribal areas. He warned that any U.S. incursion would enrage the Pakistani public and defeat any hope of Washington winning local hearts and minds.

The Musharraf military regime was rattled by public distaste for the invasion of the Red Mosque and seminary, and further weakened by a Supreme Court ruling on July 20 reinstating the chief justice, whom Musharraf had high-handedly attempted to dismiss. The Islamabad government fears that if the Americans abandon it now, or act precipitately, instability will ensue.

In addition, not only has al-Qaida reconstituted itself in the tribal areas of northern Pakistan, and not only did a sort of Pakistani Taliban make a play for control of some of the country's capital, but the Taliban allies of al-Qaida are resurgent in southern Afghanistan. In recent weeks they have pulled off destructive suicide bombings against NATO troops and Afghan civilians. On Monday, Taliban forces killed six NATO troops, four in a roadside bombing. On July 18 and July 19, they had kidnapped two Germans and 23 Koreans. One of the German hostages was found shot on Saturday. The presence of NATO forces and more than 20,000 U.S. troops in Afghanistan has not stopped the Taliban from attempting to regain control of the Pashtun regions.

The resurgence of al-Qaida, and the usefulness of Bush's Iraq war as a recruiting tool, were further demonstrated by events in Europe. On July 21, Italian authorities announced the arrest of three Moroccans, whom they charged with running a terror-training program from a mosque and of being linked to al-Qaida. It is believed that their trainees were placed throughout the world, including in Iraq.

In an ideal world the United States could deal with such a threat by close cooperation with Italian counterterrorism officials. But the 2003 kidnapping of an Egyptian terror suspect named Abu Omar in Italy by Central Intelligence Agency operatives without Italian permission has roiled relations between the two countries.

In February an Italian court indicted 25 CIA employees in connection with the "extraordinary rendition," and Italy has demanded their extradition, saying that Italian authorities had the suspect under surveillance and precipitate U.S. action derailed their efforts to trace his network. The CIA delivered Abu Omar to Egypt, where he was imprisoned and says he was tortured, and he has now been released. In view of this fiasco, how likely are Italian authorities to share all their information on the new Moroccan cell and its links to al-Qaida with Washington? The Bush administration, having failed to learn its lesson in Italy, is now talking about intervening unilaterally in Pakistan.

The Iraq war grabs the headlines, though increasingly it, too, is seen through the prism of the American political campaign for 2008, which is already in full swing. The U.S. public seemed little interested in the bin Laden videotape praising al-Qaida martyrs, the first to appear since October 2004. The Italian arrests barely registered on public consciousness. The connection of the Red Mosque events and the subsequent turmoil in Waziristan to the revitalized al-Qaida presence in Pakistan was seldom recognized by the U.S. press.

Astonishingly, al-Qaida may be back, and the signs of its resurgence are everywhere, but there is little reaction from an American public that has everything to fear from the group. War-weary, bogged down in a fruitless guerrilla war in Iraq, disillusioned with the Bush team (which has lied to it assiduously), the public appears to be taking its eye off al-Qaida. If so, it would be making the same mistake as Bush, who is obsessed with Iraq to the detriment of urgent counterterrorism measures. Those efforts, to be successful, will require international cooperation rather than unilateral grandstanding, not something in which this administration has proved adept.