It was my turn to bake my grandmother's beloved recipe. But when I opened the oven, I had a pan of boozy fruit slop. 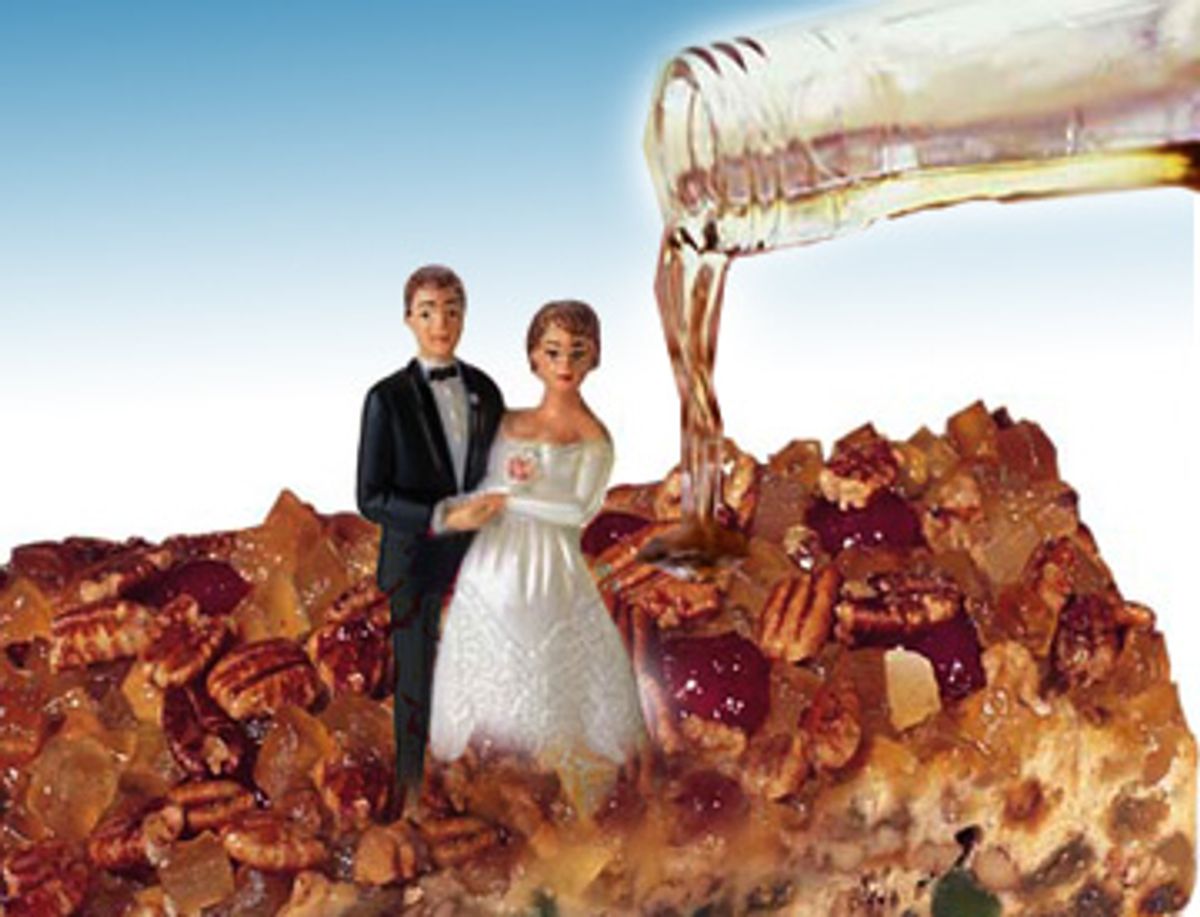 When my only sister asked me to bake a traditional Panamanian cake for her wedding, I was thrilled. The cake had been in our clan for generations, and before our grandmother passed away, she personally prepared one for every marriage celebration -- stretching out to those of our fourth and fifth cousins. I felt honored to carry on the ritual in her memory.

Panamanian wedding cake, a dark, spiced fruitcake, actually originated in the Caribbean, where a hearty infusion of alcohol kept the confection from going bad in the tropical heat. The married couple keeps the top layer of this "bride's cake" to eat on their first anniversary and cuts the remainder into square pieces that are distributed to wedding guests in small gift boxes. Thirty years ago, when my grandmother was preparing my parents' cake, she threw out her back and had to leave the fruit to soak in liquor for months longer than the typical two weeks. Their cake was quite pungent, but not hurt in the least by the extra weeks of steeping. My parents ate the top layer on their fifth anniversary. A third cousin saved hers for 10 years and reported that it still tasted just fine.

During the Inquisition, my Spanish ancestors were forced to flee their homes, scattering across western Europe. A large portion landed in the Netherlands and a minority journeyed on to the Caribbean, where they settled into steamy island life on Curaçao and St. Thomas. Eventually, a small group of those emigrants sought their fortune in Panama, bringing along with them the Caribbean-influenced cake recipe. It was there, in a little enclave of Central American Jews, that my grandmother, Emita, was born. She met my grandfather, a nice Jewish boy from Connecticut, when he was stationed at the Panama Canal with the Air Force during World War II. Forty-three years later, I was born, one-quarter Panamanian -- a relatively small portion of my heritage that I nonetheless find to be the spiciest. My Hispanic pedigree, however, is tricky to detect: I speak little Spanish, have loads of freckles and am prone to heat rash in tropical climes. So maybe I can be forgiven for feeling that my sister's wedding cake presented a rare opportunity to connect with my roots. In any case, I jumped on it.

When my grandmother died I inherited her recipe book, a red binder with duct tape not quite holding the spine together. The "miscellaneous" section includes no fewer than five distinct versions of the bride's cake written on worn index cards, each with addenda and comments of various colors squished into the margins. Emita kept impeccable notes from each occasion she made the cake, logging on Post-its the price of prunes, almonds, raisins, citron, etc. for every year since 1971. And yet the only instructions she left about the actual assembly of the cake were: "Bake 275 degrees with pan of water on floor of oven. Bakes about 2.5-3 hours, more for large layers."

My only other reference material was an exceptionally old copy of the recipe that once hung in a frame on Emita's living room wall. It was signed by its scribe, but with a family tree full of recycled names, even my most genealogy-obsessed aunt could not confirm its source. We guessed that it was probably an early version of the bride's cake from St. Thomas, but in any case, it was old enough that the tape once used to salvage the tearing creases had browned and melted into the paper, which itself was fragile and disintegrating, with faded, illegible script. It made for magnificent art, but no matter how hard I stared, no miraculous kitchen tips from my ancestors materialized.

For hours I flipped back and forth among Emita's recipe cards, eventually settling on the version she used for my parents' wedding in 1973. I smiled to think of my dad in his maroon, bell-bottom groom's suit and my mother with ironed-straight hair down to her waist. Minus the citron, the ingredients were easy enough to find, and I soon had 8 pounds of dried fruit plumping in a soup of brandy and cherry liqueur atop my fridge.

As the fruit reigned over the kitchen from its high perch, I pored over cookbooks and scoured the Web for guidance. Some sources told me to mix the fruit with the dry ingredients, others with the wet. Some instructed me to add nuts at the beginning, others at the end. But by the end of the two-week soaking period, I had a plan for a test run and was itching to start.

The operation began smoothly enough. To the boozy fruit, I added pineapple cooked in brown sugar, 2 pounds of almonds and a sprinkling of spices. My recipe then called for me to process the fruit and nuts in a Cuisinart -- which I did not own -- but having long managed without one, I was unfazed. I scooped the first fruit-nut batch into my trusty blender and pressed "grind." The blade whirred futilely, groaning against the sticky glob. I shook the machine violently and tried pushing every button, to no avail: puree, liquefy, chop -- even the supremely promising "ice grinder."

I figured a little liquid might loosen the gears, but after pouring in water and more alcohol, I forgot to replace the plastic cap on the blender lid. When, again, I pressed grind, fruit mush and hacked almonds spewed from the pitcher, coating the counter, the ceiling and my face with a slick layer of drunken compote. It took five blender batches to chop all of the fruit and nuts, and even then they were far from finely processed. I decided that had to be good enough.

Still reeling from the fumes, I started mixing the batter, adding flour to the fruit mixture and incorporating it with pounds of butter beaten with cups of sugar and maple syrup and more eggs than I could eat in a month. I didn't own a big enough bowl to contain it all, so I divided the fruit among my three largest (two mixing bowls and a salad spinner). Then, to make sure the batter was consistent, I poured it back and forth between the heavy bowls as if I were separating enormous, slippery eggs. Droplets splashed into my hair and somehow found their way behind my apron. I later discovered a patch of dried batter behind my ear and a currant stuck in my bellybutton.

These three overflowing bowls filled one 13-by-9-inch pan, a 9-inch round cake pan and an 8-inch square cake pan -- basically, enough cake to feed all the Jews in Panama. I hauled the pans into the oven and collapsed into the slick of fruit on the floor. Two hours later, my clothes reeking of prunes and brandy, I pulled 20-plus pounds of dense, mushy, flagrantly alcoholic fruitcake from the oven. This was not the meaningful token of love that I had imagined presenting to my sister and her groom.

This Panamanian wedding cake was the color of mud and similar in texture -- a fitting homage, I suppose, to the Central American rain forest. When I turned the square cake out of the pan, it drooped slowly down from one corner and then suddenly dislodged entirely, landing with a splat and fusing with the counter. I tried to split the square into layers, but my serrated knife snagged on stubborn chunks of fruit, ripping them from the cake and leaving gaping cracks and craters in their wake. As I stood face to face with my Fruitenstein, any visions I'd harbored of magnificent ivory-frosted tiers with butter-cream blossoms melted and slid from my mind.

Not surprisingly (nor subtly), the cake tasted of dried fruit and liquor. It was also quite chewy -- more plum pudding than panettone, but without the nice qualities of either. I found myself picking through to find bits of almond, the one crunchy respite from the glop. All of my tasters agreed it was "really interesting." My sister swore she was drunk after two bites. I silently thanked Adonai, Manischewitz and Julia Child for giving me the foresight to do a test run and stared dejectedly at the mess, wondering if I could safely feed it to my neighbor's cats.

I had been banking on the fact that my grandmother's cake was infallible. Turns out, I was spot-on; no matter which version of the recipe I soaked, hacked and sloshed my way through, I knew I would end up with a pile of sticky bricks. It must be the alcohol, I thought: It gets everyone so smashed they forget how offensive it was.

Fruitcake may be a popular culinary punching bag, but I was not eager to offer up my traditional "bride's cake" (a mere euphemism, I now realized) for ridicule. There was more at stake than offended palates, too. I'd fantasized about the cake as a way to connect with my Panamanian past and to include Emita in my sister's celebration. Now I faced a dilemma: Bake a delicious confection with little resemblance to my grandmother's, or uphold tradition at the risk of certain humiliation and indigestion? I poked at the cake provokingly, hoping for an answer, but it only retreated into a soggy slouch.

For the next few weeks, I tried not to think about the cake. I baked cookies and cooked custards, rolled tarts and froze popsicles. I hid the brandy bottle under the sink and used up the leftover dried fruit in my morning cereal, but I couldn't escape the fact that the wedding was fast approaching and, with it, the cutting of the cake. I could not figure out what to do, and all the while, the framed recipe leaned tauntingly against my wine rack, challenging my credibility as a Panamanian.

But then one day, as I was leafing morosely through Emita's recipe binder, the solution hit me like batter from a coverless blender: If her scribbled notes and half-dozen recipes taught me anything, it was that my grandmother understood that adaptation, rather than perfect imitation, is the key to tradition. Little changes are what inspire us to keep tradition going, generation after generation.

My confidence renewed, I leapt to my feet, nearly dislodging the card for Mildred Levinton's carrot ring. I would try again! Only this time, I would use someone else's tried-and-true (and hopefully delicious) recipe. A quick Google search confirmed that Alton Brown's free range fruitcake was the best anyone had ever eaten. I could taste it already, delicate and balanced, a spice cake with fruit. I didn't think Alton Brown was Panamanian -- at least, he didn't look it -- but who was I to judge?

Not 24 hours later, a cake was bronzing perfectly in the oven. Except for some stubborn stains on the ceiling, my kitchen was clean. My face and bellybutton were free of fruit mash. My blender sat pristine in the cupboard. A sweet, spiced perfume filled my house like a Caribbean breeze.

I placed Emita's cookbook back on my shelf and lovingly hung her old framed recipe on the wall next to my family photos. The truth is, whether it came from my grandmother's recipe or Alton Brown's, if I called it a Panamanian wedding cake, that's what it would be. No matter what it tasted like, the cake would still be a symbol of my family's link to Emita and our heritage. And if I could help associate that heritage with good taste, well, that'd just be the icing on the cake.