What were the pre-2005 "other intelligence activities"?

We know the administration was spying on us for years in ways even more illegal than in the Terrorist Surveillance Program. Why don't we know what it was doing? 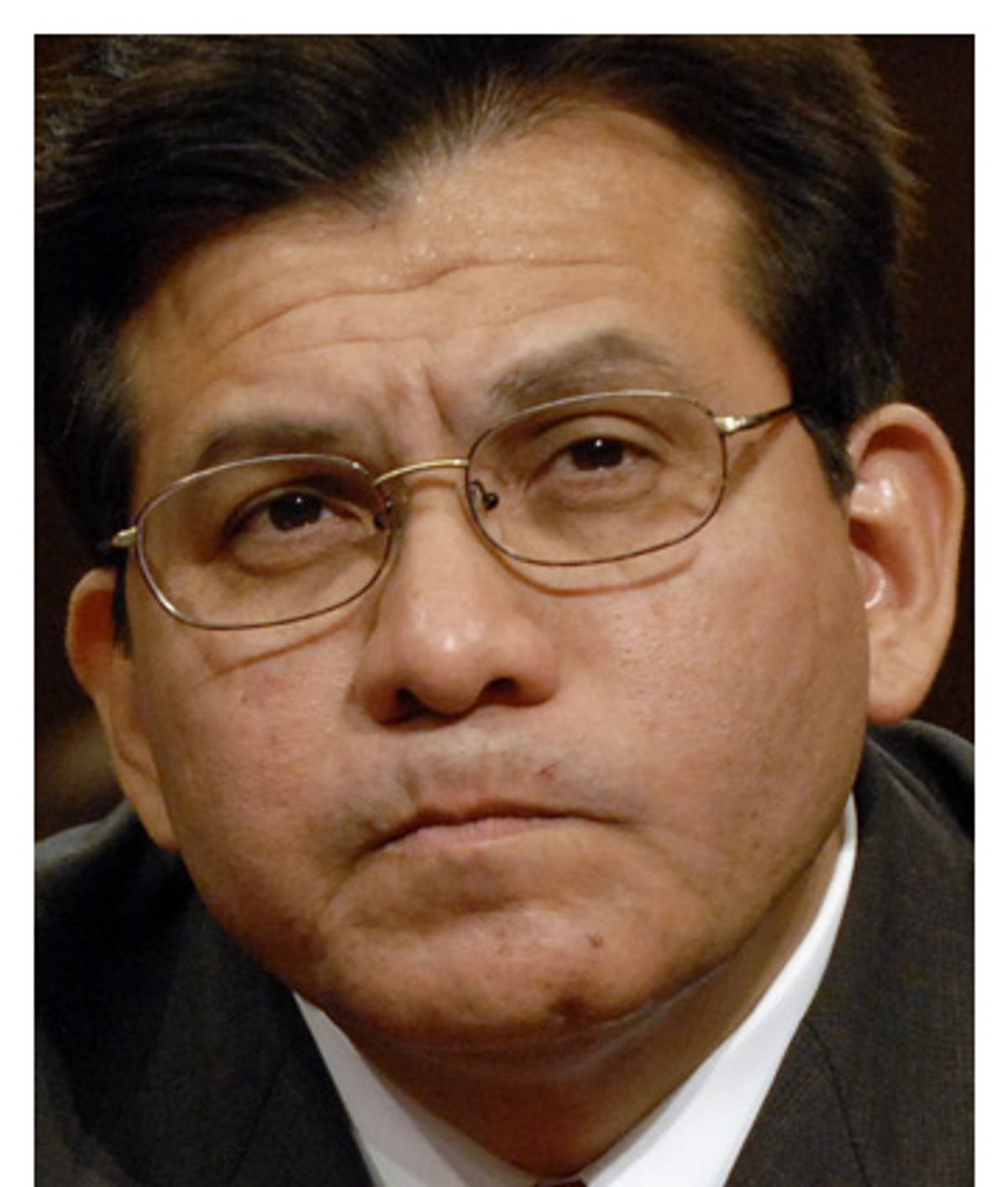 That Alberto Gonzales is a serial liar -- including when he testifies under oath to Congress -- has been long-established, and few people now bother to dispute it. He has been lying to Congress' face about the NSA scandal since it first emerged in December of 2005. When he first testified to the Senate Judiciary Committee in February, 2006, he made a series of statements that turned out to be so obviously false that he was forced to send a lengthy letter "correcting" and retracting many of the key answers he gave.

That is what Alberto Gonzales does. He lies to protect the President. And the President will never fire him. Gonzales isn't keeping his job despite his willingness to lie to Congress, but because of it. Congress has no choice but to act meaningfully -- impeachment of Gonzeles and a Special Prosecutor -- and if they do not, then, I suppose, one could say that Congress deserves to be lied to.

Having said that, though, many commentators who are focusing on Gonzales' specific wording concerning Ashcroft/Comey's objections -- i.e., that those objections did not apply to the "Terrorist Surveillance Program," but rather only to "other intelligence activities" -- are missing, even unintentionally obscuring, the critical point here.

Ever since George Bush came right out in December, 2005 and admitted spying on Americans without the warrants required by law, the administration has been playing the same rhetorical game. From the beginning, when asked questions about the scope of their spying activities (are you eavesdropping on domestic calls, too? opening mail with no warrants? entering homes with no warrants?), they have carefully confined their denials to "the specific program which the President confirmed" -- i.e., the specific "Terrorist Surveillance Program the NYT revealed. They have always made clear that there are "other intelligence programs" that we do not know about and which are excluded from all of their public assurances.

Since the end of 2005, Gonzales in particular has qualified almost every statement he has made before the Senate Judiciary Committee by drawing a distinction between (a) the "Terrorist Surveillance Program" (which means the NSA warrantless eavesdropping program in its incarnation when it was revealed in 2005 by the NYT) versus (b) "other intelligence activities," including whatever it was they were doing prior to March 2004 that prompted Ashcroft and Comey's objections.

Here are just a few examples, from a Senate Judiciary Committee hearing in February of 2006:


KOHL: Just to go back to what Senator Biden and then Senator Kyl referred to about Al Qaida-to-Al Qaida within the country, you're saying we do not get involved in those calls...

GONZALES: Not under the program in which I'm testifying, that's right. . . .

KOHL: And if there's some criticism, he'll take the criticism. And yet you're saying Al Qaida-to-Al Qaida within the country is beyond the bounds?

GONZALES: Sir, it is beyond the bound of the program which I'm testifying about today.

That Gonzales plays this semantic game of confining his answers to the "program confirmed by the president" but excluding unknown "other intelligence activities" is not new at all. This is what Dan Eggen of the Washington Post wrote on February 7, 2006:


Gonzales chose his words carefully, frequently limiting his answers to "this program" or to "the program the president has confirmed." At one point he said senior Justice Department officials, whose concerns about the program contributed to a temporary halt in surveillance in 2004, did not raise objections to the program he was discussing.

It has been clear for a long time that there are "other intelligence activities" beyond the "Terrorist Surveillance Program" which are clearly illegal. And any doubt about that was dispelled entirely when James Comey testified, since his whole point was that whatever it was that they were doing prior to March of 2004 to spy on Americans was so illegal that he, John Ashcroft and FBI Director Robert Mueller all threatened to quit if it continued.

Ashcroft and Comey did not object to the "Terrorist Surveillance Program." To the contrary, they signed off on it, authorized it as legal, in March of 2004. That is what resolved the conflict and stopped them from carrying through on their threat to resign en masse.

What they objected to were the so-called "other intelligence activities" (or, put another way, the "TSP" prior to its March, 2004 revisions) in which the Bush administration was engaging for at least the period of time beginning with the 9/11 attacks until the Ashcroft DOJ erupted in protest in 2004. As A.L. explained: "The program that prompted the hospital room showdown subsequently underwent significant changes before the DOJ was willing to sign off on it again." What is so important here is that those "other intelligence activities" were so patently illegal and so extreme that Ashcroft, Comey and Mueller not only concluded they were illegal, but threatened to resign en masse unless those spying activities ceased.

Beyond Gonzales' long-established chronic lying, then, the critical issue that has to be addressed is this: what did these "other intelligence activities" entail? How can we not know the answer to that question? After all, even the President's own DOJ appointees -- who are radical enough in their own right to have authorized warrantless eavesdropping even in the face of FISA -- all unanimously and emphatically concluded that it was unlawful. And, by all accounts, it did stop -- more than three years ago.

What this means is that our own Government was spying on us using methods even more blatantly illegal than the "Terrorist Surveillance Program" that was revealed. Whatever these "other programs" entailed shocked the conscience even of the right-wing Bush lawyers in the DOJ. Thus -- as Marty Lederman put it -- "Can You Even Imagine How Bad it Must Have Been?"

What arguable excuse is there for continuing to conceal from Americans what our government did? Whatever it was they were doing is unquestionably illegal. It has been abandoned for years now, removing any "national security" justification for ongoing secrecy. And it entails our government, at the highest levels, spying on us in ways that were so wrong and illegal that the Attorney General and FBI Director and various deputies all threatened to quit.

Is anyone in the Beltway interested in what they were doing during this time? It is not news that there were "other intelligence activities" besides the "Terrorist Surveillance Program" that were illegal and extreme. We have known that for a-year-and-a-half based on how they have parsed their answers. And we knew it inescapably once James Comey said that he was going to quit once he realized what they were doing and how illegal it was.

Our Beltway political class just has chosen not to demand to know what was done, notwithstanding its blatant illegality. How can we just allow these government activities -- of plainly illegal government spying on us during 2001-2004 -- to remain concealed?