Ginning up a fight between Clinton and Obama 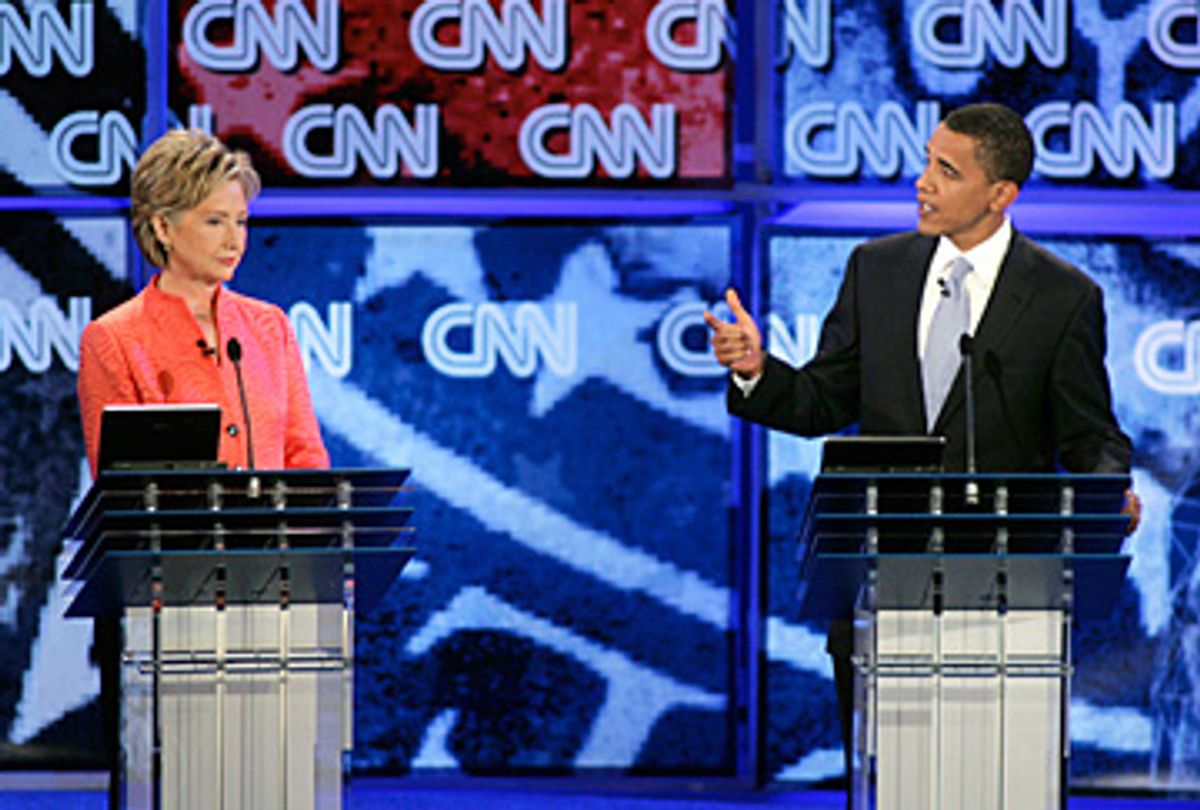 As Hillary Clinton and Barack Obama, in the wake of their disagreement about diplomacy during Monday's debate, continue to spar over the issue of foreign affairs, their frenzied efforts to score debating points have obscured the important truths that each candidate touched upon. In keeping with the stupid gamesmanship of primary politics, encouraged by the peanut gallery of the Washington press corps, they must magnify small differences and parse snipped phrases. And along with their flacks and surrogates, they must pretend that these sophomoric maneuvers have actual meaning for the making of American policy. Meanwhile, everyone involved is trying desperately to prove what tough weenies they are.

Like all of the other Democrats running for president, both senators believe that the international standing of the United States -- plunged to its historic low by the Bush administration -- can be restored only by repairing our alliances abroad and abandoning the current preference for force over diplomacy.

On his campaign Web site, Obama provides a full complement of specific, sophisticated foreign policy plans designed to make the world more secure, and more decent as well. His basic premise is that "America must neither retreat from the world nor try to bully it into submission ... America must lead the world, by deed and example ... America cannot meet the threats of the century alone and ... the world cannot meet them without America."

As for Clinton, her Web site's foreign policy page emphasizes not only her formidable qualifications but also her departure from the destructive policies of the Bush administration: "We know we need global coalitions to tackle global problems like climate change, poverty, AIDS, and terrorism. And to keep our country safe, we need to start engaging our enemies again. During the Cold War, with missiles pointed at us, we never stopped talking to the Soviet Union. That didn't mean we agreed with them or approved of them. But it did mean we came to understand them -- and that was crucial to confronting the threats they posed." It also meant, of course, that our leaders met frequently with Soviet (and later Chinese) leaders, reached important agreements with them, and encouraged connections with their people through trading, cultural, academic and athletic exchanges.

So where do Clinton and Obama truly differ on foreign policy? In reality, the contrast is far from stark and more a question of character than ideology or philosophy. Obama is bold, intuitive and independent; Clinton is mature, careful and grounded. To succeed in renewing America's engagement with the world, the next president will require all of those characteristics.

Obama deserves great credit for his courageous dismissal of the conventional stupidities of Washington's conservative establishment and the Beltway media. When he said that he would be willing to meet the leaders of Cuba and several other so-called rogue nations, without preconditions, the arbiters of respectable opinion swooned and sputtered. But his urge to break with bad old habits certainly makes sense. And it is refreshing that he doesn't much care when all the brilliant people who have created or abetted our present disaster attack him.

Obama's clear-cut debate answer showed a healthy skepticism of policies that are no longer in our interest if they ever were. Who can still justify the embargo of Cuba, which has accomplished nothing for the past four decades except to empower Fidel Castro? Why do we trade with China but not Cuba? Why do we prefer the human rights record of Saudi Arabia to that of Venezuela? Why do we defend with American blood and money an Iraqi government that maintains close diplomatic ties with Iran, but refuse to exchange ambassadors with Tehran?

Of course, Clinton was correct when she criticized Obama's statement as too blunt and too impetuous. Her campaign sent out former Secretary of State Madeleine Albright to explain, rather ponderously, that heads of state don't meet unless Cabinet ministers, aides and deputies have worked out all the details in advance. The optics of such meetings remain important, as Obama surely knows. So when Obama says he'll meet with Hugo Chavez or Kim Jong Il if elected president, that doesn't mean he'll be jetting off to Pyongyang for an impromptu bulgogi barbecue. As Obama put it, he wouldn't meet them "without having done the appropriate groundwork." All the fretting foreign policy mandarins can calm down now.

What kept coming to mind as Clinton and Obama traded jabs was another presidential contest, when a younger outsider confronted an older hand. Nobody would have voted for Bill Clinton against George Herbert Walker Bush if experience and caution were the only values that mattered. To end an era of stagnation and decline, our newly elected policymakers will need a touch of audacity, too.