Newbie home flipper and broker Alison Rogers talks about bad agents, selling schemes and why it's impossible to predict the housing market. 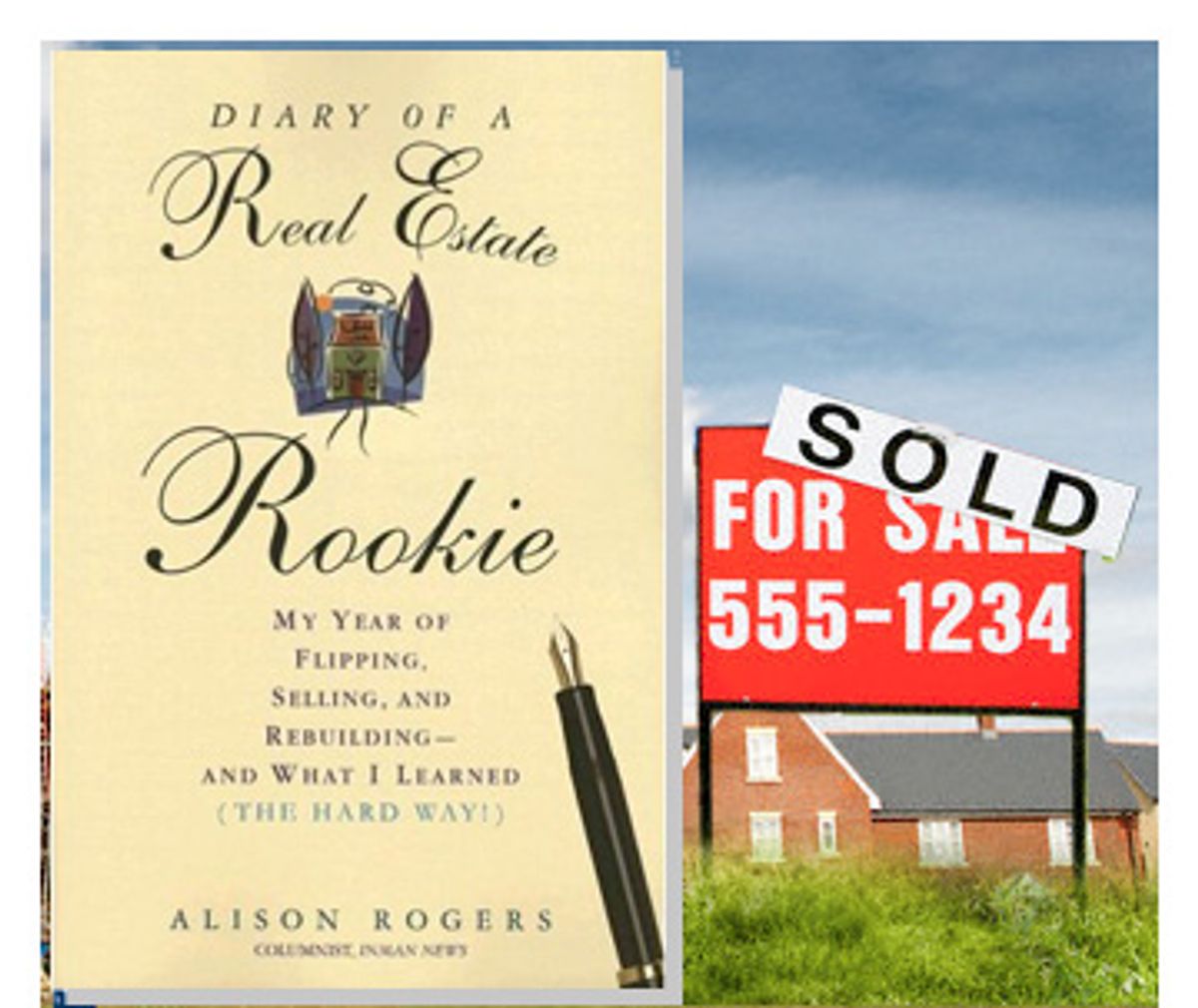 "There's a joke in the industry that real estate is no one's first career," writes Alison Rogers in her new memoir, "Diary of a Real Estate Rookie: My Year of Flipping, Selling, and Rebuilding -- and What I Learned (The Hard Way!)." "It's always something people come to by default, seeking money."

Rogers is no exception. A seasoned business journalist and a founding editor of the New York Post's real estate supplement, she quit her job after a promised raise failed to materialize, and went off to seek her fortune as a home flipper in New Jersey. That she didn't live in the Garden State, and had yet to learn how to drive the car she would need to use to view a potential purchase, didn't deter her. After all, home prices in Newark were increasing by more than 30 percent year over year. How could a girl miss?

Needless to say, things didn't go according to plan. Rogers discovered that finding a suitable home, performing some quick and none-too-expensive renovations, and selling the home for a profit were a lot harder than they look on TV shows like "Property Ladder" and "Flip This House." Soon she turned to brokering in Manhattan to pay the bills -- and though she met with some success -- the big payday she'd dreamed of still eluded her.

Earning a decent paycheck from real estate has never been easy, despite the gold rush mentality that has prevailed over the past decade. According to the National Association of Realtors, agents with two or less years of experience can expect to earn around $12,000 annually. In one semihilarious, semi-heartbreaking instance, Rogers lost a $65,000 commission on a multimillion-dollar Tribeca condo ("The kitchen alone, with its Bulthaup cabinetry and pietra del Cardoso stone, was probably worth six figures") when, after negotiating a contract with the seller, her clients failed to wire the down payment money and vanished without an explanation.

Yet Rogers keeps her sense of humor and remains a true believer, sprinkling her memoir with witty and pithy tips on everything from how to make a successful lowball bid on a home to how to chat with a real estate agent. Nothing, it seems, will deter her -- not even the current real estate market, with its rising mortgage rates and falling sales numbers. After all, insiders may be comparing the conditions of the current national real estate market with the Great Depression, but figures released this week also demonstrate continuing price increases in the New York City co-op and condo markets.

Rogers met with Salon in New York, where she discussed how the home-buying business favors brokers who offer bad service and why we should be wary of anyone who says he or she can predict where the market is headed.

Why are we so fascinated with real estate?

It's a sport. It's like a way of watching baseball where we can see the standings. It's voyeurism and gossip and social standing and architecture and beauty.

What made you think you could become a successful home flipper?

I'd lived in New York City since 1988 and I had bought a succession of apartments. And like many, many other people who rode the real estate bull market, I made a lot of money. And I thought I made a lot of money not because I was lucky but because I was a genius. That's a very common bull market mistake. You do a couple of successful deals and you're like, "It must be me."

And I saw all these people walking through the Post offices making all this money. And then I found partners in New Jersey I thought I could work with. In my naiveté I didn't understand the extent to which I was looking for a needle in a haystack. If I had been willing to do this with my own capital and I could have taken lower returns, I could have done it. But I was looking for very high returns because I was trying to do this off of someone else's capital. And the very-high-return projects are indeed needles.

Why are they so hard to find?

What I find out is happening is that the contractors get to the houses before anyone else really does. Very often a contractor is called in to work on a house. The roof leaks. Or this window needs to be replaced. So they see a great deal of the community stock. And when there's something really good, they take cash out from under the mattress and they buy it.

Why do we all think flipping houses is so easy?

I think partly because it is a kind of sweat equity that we're comfortable with. You know, a lot of us sit behind desks and we don't really use our hands. And the idea of painting or repolishing a table or rubbing out some woodwork sounds a lot more reasonable than going out in the yard and building a sailboat. So it seems, if you'll pardon the pun, sort of close to home. And then we have all these people on our TV look like they're doing a wonderful job at it. There's a visual TV culture which has brought us not only the idea but this set of images that go with it.

What did you learn about real estate as a flipper that you didn't or couldn't have learned as an editor?

I had read all the books that said you need to have a cash flow and you need to have capital. But I truly, truly didn't understand that until I got into it. You need starting capital. Capital is almost everything. When I was sitting behind a desk (at the Post), the people I was interviewing made it sound easier to acquire than it actually has been.

You ultimately change tacks and become a real estate broker, handling both home sales and rentals. Yet you admit in your book that many brokers have a less than stellar reputation for a reason.

One of the phrases I like to use as an agent is: "All I want to do is give you the level of service you get from your Mercedes dealer." And it's really a sad commentary when I think that if I were as communicative and honest as a good car salesman, I'd be raising the standards of my profession.

The incentives are to lie and to push. Most Realtors are like that because the ability to transact quickly, even at the price of pushing their clients into deals, is what makes them money. Realtors don't get paid till closing. If the industry were structured such that you would pay me a flat fee to run around with you as a buyer's agent and explain to you the subtle differences between two towns, then I would be rewarded for being patient and being a font of information. But as it stands, if I'm patient and I'm a font of information and you don't buy, I'm out of luck.

I also think clients don't really compensate you for being laid back and better. Like, I have a smaller clientele, and my clients love me, and they refer. Which is great. But I think I probably also attract a lot of people who look around for six months and then don't buy. I won't shove them into buying. But on the other hand, my paycheck's lighter because of that.

You have a number of stories in the book of people who look at homes for months -- or years -- and never make a purchase. What's going on?

Why do you and I go into Saks and try on dresses that we may not end up buying? There's a certain part of the aspiration curve where you do have to look at it to decide if it's right for you. And a certain percentage of those people who are aspiring and trying to figure out if it's right for [them] will go, "No, it's really not." But of course they're doing that on my time.

Are you going to stay with it?

I'd like to keep agenting and keep writing at the same time. And I hope that there's room for both. In my 20s, I always wanted to be a comedy writer. So now it just tickles me beyond words that this book is being seen as funny. On the other hand, I really like the satisfaction of getting someone the right home or selling someone's home and watching the paycheck in their pocket enable them to do something that they otherwise wouldn't have been able to do.

You write in the book that people coming into brokering with an upper-middle-class background have an advantage. Can you explain?

There's also a sort of sensibility. When I studied for my license in New Jersey, there were some poor African-American kids in my class. There's this one girl who's a hairdresser and she's asking questions we would consider basics in the industry. She literally doesn't know how agents get paid. Whereas I think most upper-middle-class people hear talk such as "I can't believe I'm paying that firm 6 percent to sell the house" at the dinner table. And an upper-middle-class person who's a salesperson doesn't have to learn how to deal with poor people. A poor person who wants to be a salesperson wants to learn how to deal with people with money.

I think that we as an industry have gone out of our way to disseminate the myth that this is going to be easy. Moving is hard. Buying is hard. Selling is hard. Renovating is hard. These are all huge life changes. They're all an incredible hassle. They're all really hard to do as a single person. They're even harder to do when there are family members involved. And I think we really have tried to tie it up in a bow and say, "Look, a new house will solve all your problems."

What do you think is in store for the market next?

I always tell people that if I truly understood and could predict what would happen to a market, I wouldn't have to be an agent. I could be a hedge fund guy on a yacht somewhere. So don't believe anyone who tells you they can predict markets, because they're always lying.