The first lesson of Iraq: Beware of those who play dice with God. 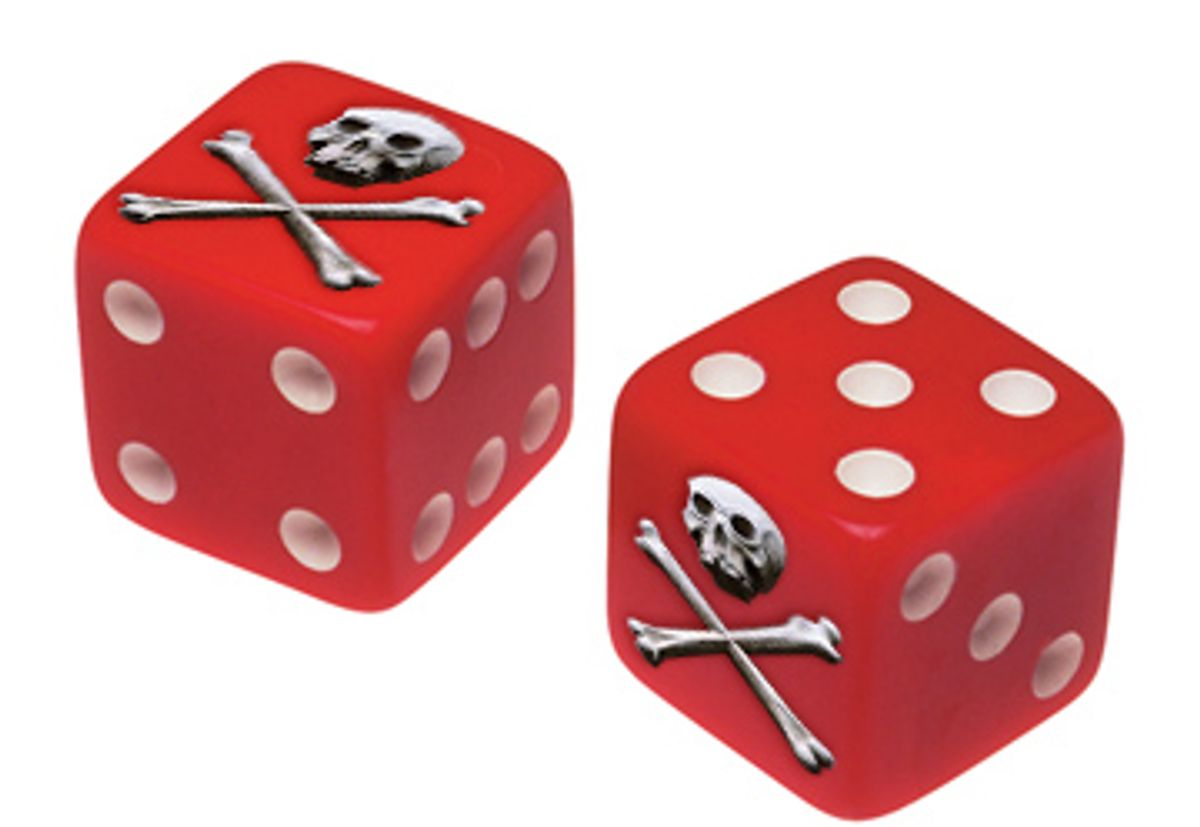 In the last few weeks, as the dreadful consequences of George W. Bush's "war on terror" continue to unfold in Pakistan, Iraq, Afghanistan, Lebanon and Palestine, a disturbing thought is rising to the surface: There may be no way to clean up the mess he has made.

Ironically, this is the very argument that Bush and his supporters are now using to justify keeping U.S. troops in Iraq indefinitely -- or at least onto the next president's watch. They insist that disaster looms, and that only the blood of American troops, infused into a slow-drip I.V., can keep Iraq and the entire region from dying. Bush understands that there are only two things that can save his legacy: either victory, or a worst-case scenario in which all of his threats about the all-powerful Islamo-fascist menace come true. The frightening thing is that for Bush, there's no difference between the two outcomes. For this president is at once a true believer who sees himself leading a great war against evil, and a shrewd politician who wants to escape the blame for his Iraq disaster. Hence his refusal to cut America's losses -- and the very real possibility that he might roll the war dice yet again, this time in Iran. If the world blows up as a result, that will just prove that he was right about the evil jihadists.

Most Americans now believe that Bush's decision to invade Iraq was a terrible mistake. They see that it has turned out badly, and think that it has made us less safe. But there is another, less discussed reason why the war was an act of madness: War always has unforeseen consequences. Making war is like playing dice with God -- using His dice. This is why war should always be a last resort. What's stunning about the Iraq war is that its architects not only ignored this obvious truth, but also ignored the consequences that could have been, and were, foreseeable. To start an unprovoked war on false pretenses and pie-in-the-sky promises of a vast regional transformation, besides being unethical, is an act of almost cosmic folly. To put it in Christian terms, it is the cardinal sin -- the sin of pride.

The Bush administration treated war as if it were a surgical instrument, which it could wield with precision and whose results could be charted in advance. Bush and his neocon brain trust were sure that they knew exactly what would happen after the invasion. They drew it up like a blueprint: Grateful Iraqis would place flowers in the barrels of U.S. guns. A strong central government would take power, and democracy would flourish. The people of Iraq's neighboring states, Iran and Syria, would observe the vibrant new state and force their sclerotic regimes to reform, or they would rise up against them. The "culture of terrorism" would be ended, cut off at the source. The entire Arab-Muslim world, including Pakistan, would be transformed. The Palestinians would be beaten into submission. And there would be cheap oil for America.

Clean, clear, concise -- and mad. There was no historical precedent for any of these happy predictions -- they were simply put forward as if they were self-evident. Like the emperor parading down the street in his wonderful new clothes, the neocons happily presented their sunny hallucinations to the American people, Congress and the media. And unlike the crowd in the fairy tale, the country actually believed them.

Even if the war had gone exactly according to plan, the neocons' grand vision of regional transformation had about as much chance of success as throwing a hand grenade into a printing press and it spitting out a copy of "Hamlet." But they compounded their folly by convincing themselves that they could control the war. Push a few buttons here, insert a few battalions there, and the enemy would vanish like a pixelated villain in a video game.

The neocons fell prey to the same delusion that has always hypnotized warmongers: They thought they could control war. But wars are like experiments with unknown, volatile substances: Their outcomes cannot be predicted. War means killing people on a mass scale. It is a human earthquake, a tidal wave, a forest fire, unleashing chthonic forces far too large for us to comprehend, let along control.

In Mark Twain's "The Mysterious Stranger," Twain describes how the most minute alterations in a person's destiny -- alterations made by a handsome young man who happens to be the devil -- completely change the subsequent course of history. War is comparable to such a supernatural intervention. It is as close to being a rip in the fabric of space and time as you can get in the Newtonian universe. It puts too many variables in play, and we cannot control enough of them. And even those we do control end up creating new problems that may be worse than the original ones.

A classic example of the law of unforeseen consequences was America's support for the mujahedin's guerrilla war against the Soviets in Afghanistan in the 1980s. We won our proxy war against our Cold War foe, but in the process created another enemy, al-Qaida, this one far more intractable. Something similar is taking place in Iraq. The neoconservative architects of the war convinced themselves that the Shiites would be good allies to use against Saddam and the Sunni establishment. But it turned out that the Shiites had their own agenda, which was not the same as the neocons', and in fact was closer to that of their coreligionists in Iran and Hezbollah. (Actually, this shouldn't have come as a surprise to anyone.) So then the U.S. changed gears and tried to play divide-and-conquer by appealing to the Sunni establishment to smash the Shiites -- but that enraged the Shiites and helped create the poisonous sectarianism that has destroyed Iraq, is tearing Lebanon apart, and threatening the stability of the entire region.

Invading Iraq also reawakened the Turkish-Kurdish conflict, one of the most potentially destructive in the region. If the reports are correct that Bush is prepared to loose Turkish troops on Kurdish guerrillas, yet another regional conflagration could be ignited.

As for Iran, that's the biggest farce of all. Iran was the neocons' real target. But the war that was supposed to topple the mullahs solidified their grasp on power. The real winner of the Iraq war is Iran.

And those are just the consequences of the war that we can see now. The future may be far grimmer. The Israeli-Palestinian crisis is deteriorating daily and could blow up at any moment. The U.S. and Russia could start up a new Cold War, using Middle Eastern pawns as proxies. The Saud dynasty could lose its grip on power, with devastating consequences for the global economy. And if Musharraf falls in Pakistan, the prospect of an unstable nuclear regime could suddenly become a reality.

It is now widely accepted that the Iraq war is destined to go down in history as one of America's greatest foreign-policy debacles. But I think it will come to be seen as something much stranger: as an almost incomprehensibly frivolous act of hubris, a bizarre tempting of fate. When all the political arguments and partisan rancor have been long forgotten, people will remember this war's utter weightlessness, using that word in the sense that Milan Kundera does in "The Unbearable Lightness of Being," to denote a kind of enigmatic half-reality. Mark Danner astutely called it "the war of the imagination" -- a Perfect War, like a Platonic Idea, that existed only in a timeless realm. The gap between the airy vacuity of the arguments for the war and the hideous war that then appeared, literally out of nowhere, is confounding. To this day, there is something creepily magical about it, as if a troupe of two-bit magicians had brought their pathetic act to a provincial town, waved their handkerchiefs in the air, and pulled out of their hats a ... real, live, 50-foot-tall demon, which proceeded to rush out into the street and begin knocking down real buildings and devouring real people.

In "War Is a Force That Gives Us Meaning," the veteran war correspondent Chris Hedges describes the kind of collective patriotic mania that seizes nations as they prepare to go to war. In the case of Iraq, something even odder took place: a collective blank, a kind of stunned, passive acquiescence. Bush invoked the passions and fears stirred by 9/11 to rally support for his war, but for most Americans, a year and a half after the attacks, those passions had cooled: They went along with the war dutifully, in deference to a patriotic appeal they neither accepted nor rejected. This was not a hot-blooded war. It was one we sleepwalked into.

But America is not the first country to be led like a half-hypnotized lamb to the slaughter by a delusional leader. The ultimate responsibility rests with Bush. Which raises a final question: Where did Bush's fatal hubris come from? Why did he think he could challenge God?

The question of how a president's faith affects his decisions is, of course, a matter of conjecture. But there is ample evidence that Bush's delusions about Iraq are inseparable from his religious faith. Of course, there are millions of deeply religious people whose faith has not led them to abandon reason. But Bush's faith appears to have only deepened his native arrogance: He sees it as a form of humility, a poor sinner's acceptance of God's will. Bush believes that God is on the side of this war, and that everything will therefore come out all right in the end. He does not care about the real world -- because for him it isn't the true reality. The war in Iraq, that horror in which real human beings are dying, is merely a stage before good finally triumphs over evil. And if that victory does not take place in our lifetime, it doesn't matter: All that matters is that he fought the good fight. This is why he did not concern himself, and still doesn't, with details such as whether this war is winnable in any non-biblical time frame.

So there are two related lessons America should take away from the Iraq disaster. First, don't treat war lightly. It is an insanely powerful and unpredictable agent, one that can destroy everything it touches. Second, beware of leaders whose devotion has not brought them real humility -- and beware of their wars. They will see war as a toy, which they control, or which is controlled by their God. But nobody controls war. Not even God.