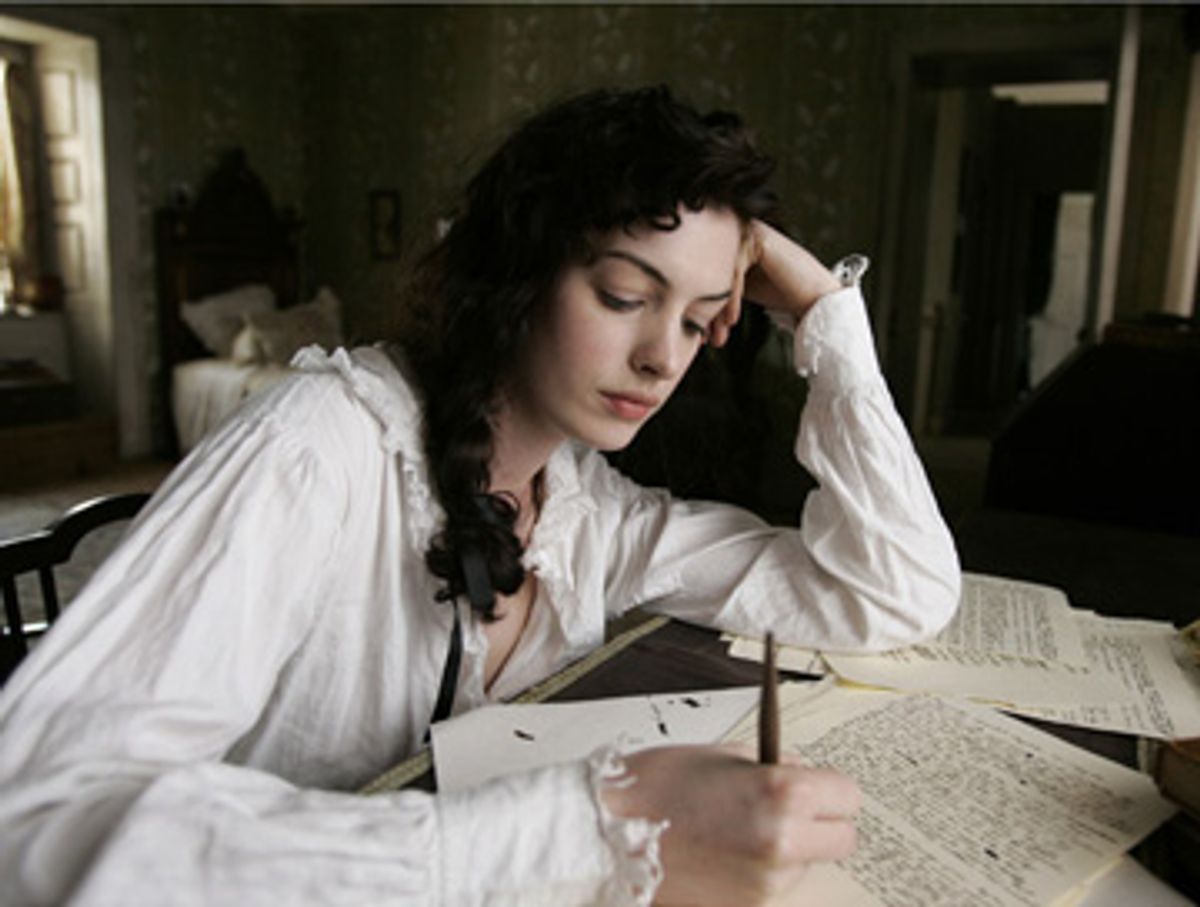 First, let's put the most generous spin possible on the idea behind "Becoming Jane," an imaginary account of a love affair that the young Jane Austen may have had, circa 1795, with an Irish lawyer named Thomas Langlois Lefroy: It's possible that this leaden little trifle of a movie -- directed by Julian Jarrold (who made the sweet, entertaining "Kinky Boots") and written by Sarah Williams and Kevin Hood -- exists simply as a misguided act of generosity. For 200 years, readers have loved the way Jane Austen looked at love: It's natural, maybe, that we want to believe that at some point in her lifetime she had the pleasure -- with all its concomitant suffering and torture -- of experiencing romantic love herself.

So why not reimagine Austen as a lithe brunette with pillowy lips and airbrushed skin, a magnificent creature who looks remarkably like Anne Hathaway? And why not give her a bold, witty suitor -- James McAvoy, anyone? -- who looks smashing in his velvet frockcoats and dashingly masculine leather boots? Part of the pleasure of watching movies comes from looking at beautiful people: Choosing a "plainer" Jane (there are very few likenesses of the author for us to go on, anyway) wouldn't have made "Becoming Jane" a better or more authentic movie, but perhaps only duller to look at.

The problem with "Becoming Jane" is that it snaps all too snugly into a modern template of romance, instead of going to the trouble of imagining -- since we've already acknowledged that imagining is what we're doing here -- what romance may have meant to the real Austen. "Becoming Jane" takes as its premise a few measly letters, written by Jane to her sister, Cassandra, about a young man she had the pleasure of meeting a few times. There's no law that says imagination can't be applied to the lives of historical figures, and in movies, sometimes a little extra embroidery can actually help capture the spirit of a life, as in Sofia Coppola's vibrant brocade tapestry "Marie Antoinette" or Philip Kaufman's tattered-lace spectacle "Quills."

But even though "Becoming Jane" struggles, in obvious ways, for authenticity -- to the untrained eye, at least, the country dance looks about right; the ladies' dresses are suitably Empire -- it has still been slapped with an insidious and thoroughly modern gloss. Sure, some of the characters pay lip service to the reality that in Regency England, women weren't allowed to inherit property; their only chance for economic well-being was to marry well. Even so, we have James Cromwell as Mr. Bennet -- oops, make that the Reverend George Austen -- saying to his fluttery wife (Julie Walters), "Jane should have not the man who offers the best price, but the man she wants." You can just hear the hearts of a million teenage girls -- and some older ones -- set audibly aflutter.

As Katharine Hepburn supposedly said of Fred Astaire and Ginger Rogers, she gave him sex and he gave her class. In this brave new Austenworld, it's the other way around. Lefroy, believing Jane has to live a little, or at least read a bit more adventurously, if she's to become a better writer, gives her "Tom Jones" to read, and as she turns the pages, her eyes bug out like the wolf in Tex Avery's "Little Hot Riding Hood." She's shocked -- shocked! -- by the book, and tells Lefroy she disapproves on moral grounds. Still, we can hear the delicate gears shifting around in her pretty little head. Lefroy is the kind of guy who thinks nothing of stripping off his shirt -- yowza, girls! -- and joining a boxing match among the lower orders. Jane doesn't bemoan his scrappiness; she warms to it. She may be a lady of letters, but opposites attract, and who knows? This very different guy just may come in handy if she gets around to writing that ultrafamous and beloved novel she's got buzzing in her noggin.

I suppose "Becoming Jane" might have worked as a flight of fancy, if only it didn't seem so calculated to cash in on the weird contemporary Austen-mania phenomenon, to grab a piece of the pie that's already stuffed with "What would Jane knit?" tote bags and T-shirts emblazoned with the shamelessly self-promoting slogan "An Elizabeth in a Darcy-less World." (I wish I were making this stuff up.) "Becoming Jane" is packed to the rafters with marvelous actors, among them Cromwell and Walters, the always unsinkable Maggie Smith and Anna Maxwell Martin, who played Esther Summerson in the fine 2006 PBS adaptation of "Bleak House." McAvoy is lively and eerily believable in this rather dumb role. But Hathaway -- who still may, I believe, prove herself to be a very good actress -- is stiff and awkward here, and I can't believe it's completely her fault. Her quivery lips and liquid brown eyes turn her into a romance-novel version of Jane Austen -- which is, perhaps, what the imagined target audience of this movie wants to see.

I wonder what the Austen acolytes troubled by Joe Wright's 2005 adaptation of "Pride & Prejudice" (which I loved) will think of this weird effort to remake Austen's life -- about which we actually know very little -- into a genteel, tasteful Harlequin romance. Was Austen really a smarter, feistier Carrie Bradshaw in more sensible shoes, longing for love even as she failed to hang onto it? "Becoming Jane" would have been more honest if it had been called "No Sex in the Country."