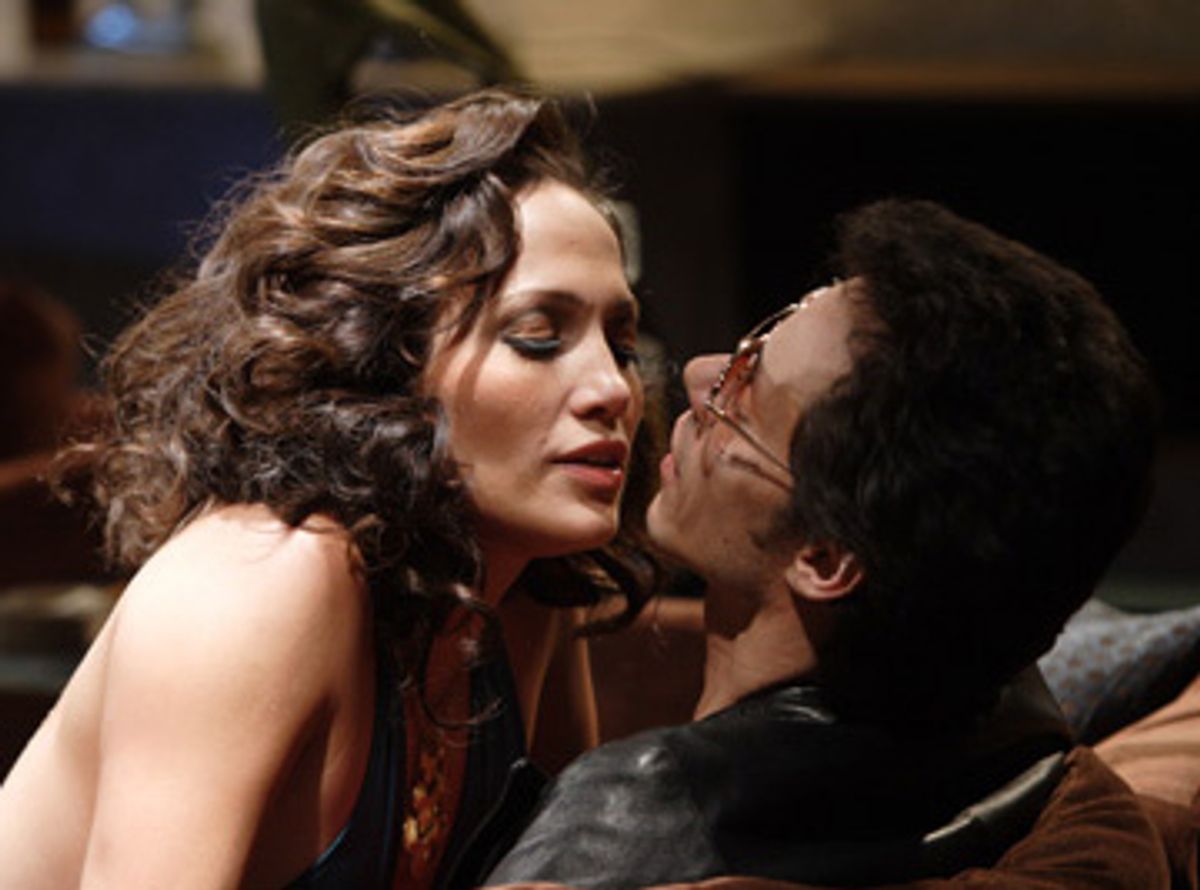 The opening of Leon Ichaso's biopic of salsa star Héctor Lavoe has a buzzy vitality that doesn't prepare you for what a drag the rest of the movie is. Jennifer Lopez, as Lavoe's long-suffering but assertive wife, Puchi, gets herself ready for an evening out, clickety-clacking through her high-toned Manhattan apartment in high heels and a liquidy red dress that looks as if it's been poured onto her curves. Accompanied by a few tough-looking guys, she slips out into the night and into a limousine, leaving her tony neighborhood for a much rougher one, where her husband -- played by Marc Anthony -- has gone to score dope. Half-awake and limp, he's piled into the back of the limo. Puchi and her able assistants hustle him into a clean shirt; she zaps away his stubble with a cordless electric shaver; she even provides a toot of coke to perk him up. And before we know it, Héctor Lavoe is onstage at a club, swaying and shimmying before hundreds of people, looking as vibrant and elegant as if he'd just emerged from a stint at a health spa, with a stop at a custom tailor along the way. The crowd loves him, and beams charisma back.

That opening sequence captures the vibe of New York in the early '70s, when salsa -- a Latin-music hybrid that began in small clubs and was nurtured by Fania Records and its stable of "All-Stars," including Lavoe and his collaborator Willie Colon, and others like Ray Barretto and Rubén Blades -- wasn't the Next Big Thing, but the sound of Now. This brief sequence captures better than anything else in "El Cantante" the dizziness and excitement that Lavoe and Puchi -- and large parts of the city they lived in -- must have felt at the time.

But before long, "El Cantante" disintegrates into a stylized jumble -- even a straightforward jumble would have been preferable. The story begins with Lavoe getting ready to leave Puerto Rico for New York, in the early 1960s, against the wishes of his father, and ends with Lavoe's death, in 1993, from an AIDs-related illness. In between, it alternately ambles dopily and zig-zags confusingly.

"El Cantante" is framed by re-creations of a filmed interview that Puchi gave in 2002 (she died, in an accident that the movie never explains, shortly thereafter): Lopez plays the older Puchi as a protective brass goddess. She regards even innocent questions about Lavoe, let alone hostile ones, with a weenie-shrinking glare.

Lopez gives a fine performance here: She's always been an incredibly likable on-screen presence, but this role gives her more to dig into. Lavoe was a charmer all right, but the movie also tells us he got two women pregnant at the same time (one of them Puchi), and his destructive junk habit didn't make him easy to live with. Lopez doesn't just play the archetype of the weary, devoted partner; she makes Puchi seem human and vulnerable beneath the tough veneer. Telling Lavoe's story from Puchi's point of view is an interesting filmmaking choice, and a smart one: Ichaso (who made the 2001 "Piñero") doesn't downplay the sexism of Latin culture, and by putting Puchi at the center of his movie, he -- and Lopez -- make it clear that when women have to, they can always find ways to assert themselves.

Even so, three-quarters of the way through the picture, after the 2,000th close-up of the admittedly gorgeous Lopez (who is one of the movie's producers) looking resolute and leonine, I started to wonder a little bit more about Lavoe. Just who was this guy? We have Puchi telling us what a great sense of humor he had, and occasionally, we see glimpses of it: In an early scene, when the young Lavoe has finally gotten up the courage to approach the supremely intimidating Puchi at a party, she tells him how ugly his pants are. He looks down in mock dismay and says, "What do you mean? These are $5 pants!"

But I wanted to know more about Lavoe, about salsa -- and I wanted more Marc Anthony. As a singer, Anthony is sly and seductive but also boyishly approachable. He brings those same qualities to his performance here, particularly in the movie's earlier scenes, where Lavoe is more of a presence. Anthony's Lavoe is gawky-sexy in his 1960s get-ups, consisting of mock turtlenecks and those aforementioned cheap pants. But as the man becomes a legend, Ichaso loses sight of him: We get more of the understandably frustrated Puchi and less of Lavoe, who seems to recede into the gold-foil wallpaper long before his unfortunate and untimely death.

And for those who don't really understand what salsa is, Ichaso doesn't make it clear how different it was from what had come before. (A character describes it as a mix, a "sauce," of mambo, rhumba, jazz and merengue, but that doesn't really give us a sense of how this music could electrify New York, and the world, as it did.) The best thing about "El Cantante" is the soundtrack: Anthony interprets Lavoe's songs in a way that makes us understand how they could open the ears of a whole city. Actions speak louder than words, and in this case, music does too.