Not only is the "surge" not working, it's destabilizing Iraq. Yet military leaders say troops should stay for the long term. 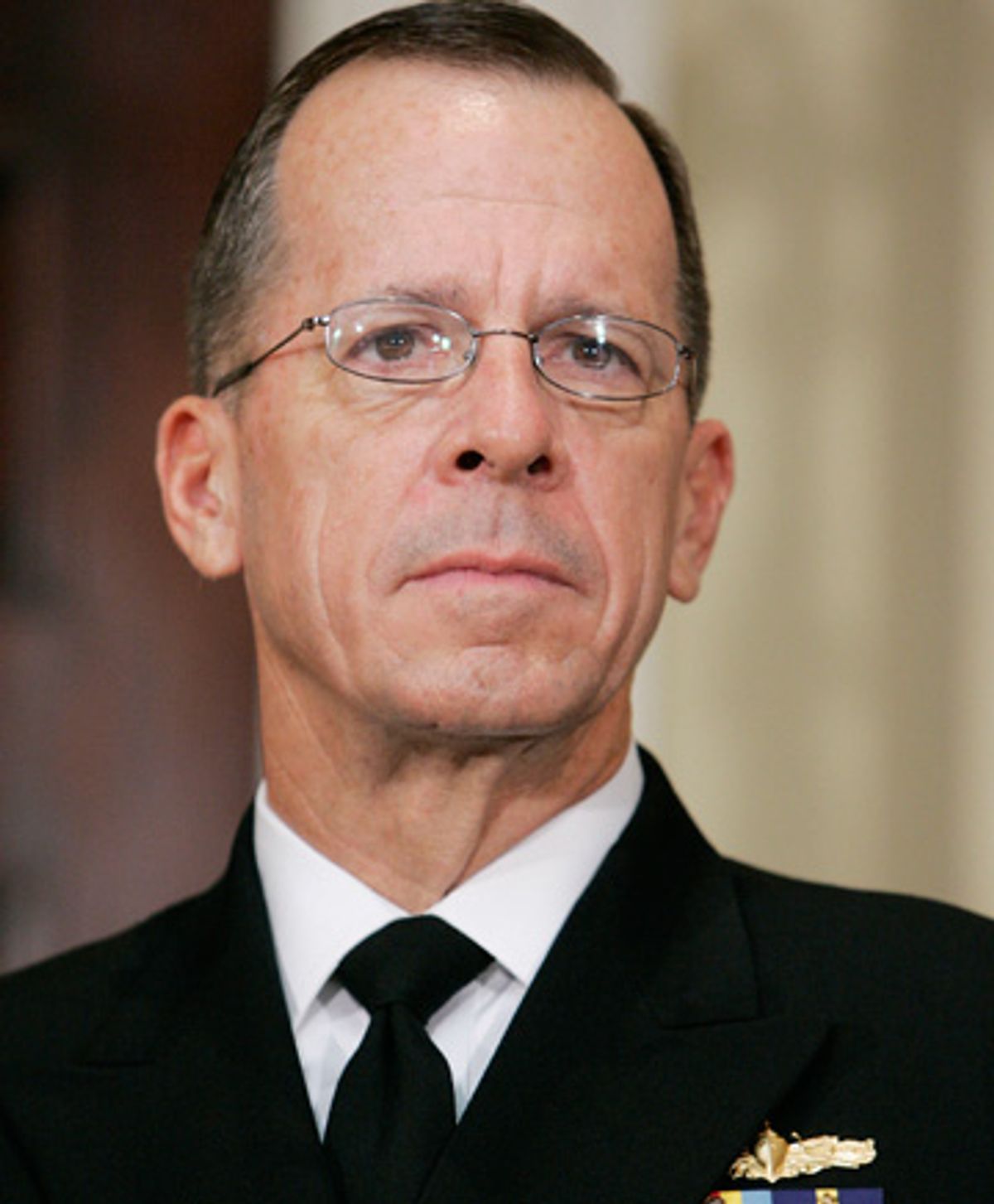 To read the prepared testimony of Adm. Mike Mullen, President Bush's nominee for chairman of the Joint Chiefs of Staff, is to understand that the Bush administration's Iraq strategy requires U.S. troops to remain in that country for a long time, perhaps permanently. With unusual candor, the admiral explained in answers submitted before his appearance in front of the Senate Armed Services Committee Tuesday that he and the president believe in the necessity of a "pragmatic, long-term commitment that will be measured in years not months."

How many years Mullen did not say, but he did offer a suggestion in this tangle of redundancies: "We must commit to a long-term security relationship with Iraq that facilitates political reconciliation, supports development of a stable Iraq, and is directly tied to our enduring long-term interests in the region." American forces will be there for the long term, just in case that wasn't clear the first few times.

Mullen forthrightly admitted that there is no "purely military solution" to Iraq's problems, and his testimony was refreshingly honest about the catastrophic errors committed by the Bush administration over the past four years, from disbanding the Iraqi army and purging all Baathists from government to the failures of war planning and diplomacy. As he noted during his live testimony, the prospects for "victory" are mixed at best because Iraq's political leaders have made so little headway toward a political settlement among the country's warring ethnic and religious communities.

Yet the admiral continues to accept the basic premise of Bush's policy -- that if our forces can create a secure environment, political progress will follow. Over and over again, he asserted that the escalation of U.S. troop levels in Iraq is achieving its goals and that those achievements can "help facilitate Iraqi political reconciliation." He also claimed to see the "beginning" of progress toward reconciliation in "the neighborhoods of Baghdad that have been stabilized," where local residents are said to be cooperating with American troops and Iraqi soldiers. (Of course, cooperation between local residents and military units demonstrates nothing about reconciliation between Shiites and Sunnis, since so many Sunni families have simply fled the increasingly segregated capital.)

This week's events raise serious doubts about the supposed success of the "surge," with renewed sectarian violence across the country and continuing U.S. casualties. The Pentagon's boast that July saw the lowest number of American combat deaths in Iraq since last November looks different when that statistic is seasonally adjusted like economic data. Since the beginning of the war, attacks seem to decline in the seventh month's hellish heat -- and by that measure, July 2007 was the worst July since 2003.

Leaving aside such boasts of success, which have been heard from assorted advocates of the war both within and outside the Bush administration, the most recent developments in Baghdad undermine the foundation of the policy enunciated by Mullen. There is in fact no evidence whatsoever that the escalation of troops has encouraged reconciliation among the Iraqi factions. It is indeed obvious that the "long-term commitment" of U.S. troops -- regardless of how the Iraqi government and parties behave -- is leading rapidly toward the political disintegration of that country.

Today, the real culmination of the surge is reflected in the resignation of the Sunni-led Iraqi Accordance Front from Prime Minister Nouri al-Maliki's Cabinet, following months of quiet efforts by American diplomats to prevent their departure. The failure of those efforts and the Maliki government's unwillingness to bring together the country's political blocs, including those representing the nationalist insurgents, have brought the government itself close to collapse. (On Thursday, Maliki asked the IAF to reconsider; it remains to be seen whether it will respond.) Cognizant of this reality, Gen. David Petraeus has downplayed the significance of his upcoming September report on the results of the surge.

Although Mullen also spoke of "incentives" to encourage Iraqis to come together on issues such as Sunni representation, the division of oil revenues and amnesty for insurgents, there is no reason for Maliki or anyone who might succeed him to make those difficult moves as long as the United States is determined to remain in Iraq indefinitely. Why should the Shiite and Kurdish parties deal with the Sunnis when we are spending hundreds of billions of dollars and thousands of lives to ensure their continued and uncompromising domination?

The risks of rapid redeployment of American troops from Iraq are real, as Mullen warned -- and nobody who advocates that course should pretend otherwise. Minimizing those risks will require the kind of diplomacy for which this administration has showed little taste or aptitude.

But at this late date, as the political structures in Iraq fall, the war's advocates cannot pretend that their strategy is working, either. The way to encourage compromise, if not reconciliation, among the Iraqis is to place our withdrawal on the negotiating table -- and to warn those we have brought to power that we are leaving, sooner rather than later, and that their only hope for stability is to dither no longer. That was the essential recommendation of the Iraq Study Group, and it is still the only plausible exit strategy.