How strong is the Democratic presidential field?

Not as strong as you think. A devil's advocate probes for weaknesses among the front-runners. 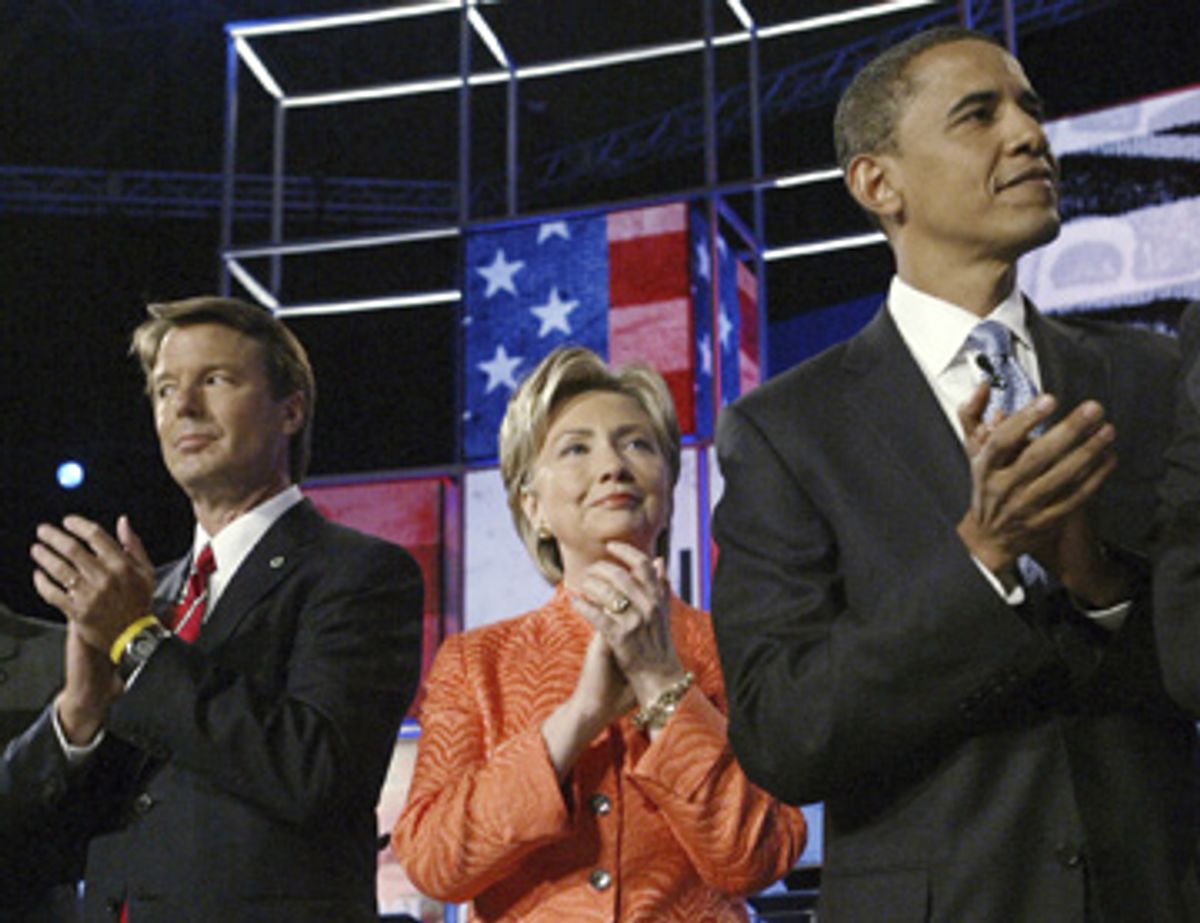 Right now, the Republican primary field is a mess. Insufficient cash flows, fleeing staffers and consultants, outdated themes and proposals, legitimacy issues with the party's conservative base, expressed unease from the GOP's dying moderate wing and, of course, a variety of problems arising from proximity to a certain incumbent president -- each of the Republican candidates is suffering from at least one of those ailments. Sen. John McCain suffers from all of them simultaneously.

So it's high times across the aisle, right? The Democrats are apparently poised to retake the White House after eight long and painful years from a man many consider a usurper. Rank-and-file Democrats seem almost giddy about their field of substantive candidates. Three out of five Republicans said in a March poll that they were unhappy with their candidates, and in July "none of the above" was the Republican front-runner. Almost three out of five Democrats, on the other hand, say they are satisfied with their party's presidential contenders.

Not so fast. Though all the standard caveats apply about how much can change between now and next November, the Democrats are undoubtedly the favorites heading into 2008. But the truth is that the Democratic field has its own share of problems. It's not quite as popular as people think it is, or Al Gore wouldn't be registering double digits among registered Democrats, running a solid fourth -- and sometimes third, ahead of John Edwards. The field is also not as strong as people think it is, and some tense and potentially threatening moments await the candidates in the months leading up to Iowa's first-in-the-nation caucuses in January.

For the big three contenders -- Hillary Clinton, Barack Obama and Edwards -- money hasn't been much of a problem to this point: Edwards trails the other two, but his fading poll numbers have nothing to do with account ledgers. Nor is there much intraparty turmoil or conflict. As the New York Times recently reported, Big Labor is so tickled with the major candidates that many unions will simply opt not to endorse, and the abortion rights and gay rights crowds seem generally content with a field that's more supportive on those issues than any previous crop. Thursday night at 9 p.m. EDT, all the major Democratic candidates will debate gay issues on the TV network Logo. Even the Democratic aspirants' personal and familial backgrounds are largely uncontroversial. (Clinton's marital situation is always a source of national fascination, of course, but unlike most of the declared or undeclared Republican heavyweights, she, Obama and Edwards are all still on their first marriages.)

The debates and press release battles have been largely confined to nits picked and, aside from an embarrassing haircut and a recent teapot-tempest over whether the next president should or should not wait a year to meet with Mahmoud Ahmadinejad or Hugo Chavez, there have been few stumbles and fewer fireworks. The worst critique of the Democratic primary so far is that it has been boring. That dismal fight between Floyd Mayweather Jr. and Oscar de la Hoya a few months ago packed more punch. Something's got to give, and the most logical disturbance is the eventual collapse of Edwards' campaign.

Good looking and emotively eloquent, the 54-year-old former North Carolina senator is compelling on television and even more compelling in small interpersonal settings. Because he basically never left the state after the 2004 cycle, Edwards has often topped polls in Iowa. But now his lead is either thin or nonexistent, and he has dropped into a statistical tie with Obama and Clinton. Nationally his poll numbers have already crested and, but for a slight bump after the announcement of his wife Elizabeth's cancer, begun to fall. Maybe the media's obsession with his appearance has had an effect, or maybe the death of his son and his wife's health have led to an unfair perception that the legendary trial lawyer is exploiting personal tragedies for the biggest jury payout of his political life.

But Edwards has another unfortunate, ironic problem: During the post-9/11 era in which the Democratic Party has at times been guilty (think 2002, 2003) of focusing too much on domestic policies as a way to de-emphasize foreign and defense issues, Edwards' highly developed domestic proposals to improve life for the poor and working classes reinforce nagging suspicions that he is not quite prepared to inherit the next president's twin burdens of a war in Iraq and a global counterterrorism effort.

More than a few Beltway analysts have noted that the early primary and caucus calendar favors Edwards. He's good in folksy, socially conservative Iowa. Nevada, next up, is a strong union state, and Edwards has aggressively played the economic populist card, as he did during Tuesday's AFL-CIO debate, to labor's delight. And although New Hampshire affords him little hope, if he can survive there and make it to South Carolina -- his birth state and the only one he carried in 2004 -- he could parlay his regional advantage to become the Big Mo candidate heading into the Feb. 5 mega-primary. But given the calendrical advantages, if Edwards doesn't win Iowa, he's finished. (And, interestingly, he has slipped to third in the Palmetto State.)

If and when Edwards fades, the big question is where his 10 to 15 percent of Democratic voters turn next. Are they anybody-but-Hillary Democrats who will gravitate toward Obama? Or are they suburban Democratic women who find Obama's liberalism discomfiting enough to become Clinton converts? Unless this bloc of Democrats simply believes that taking back the White House in 2008 is too important to risk the trailblazing nomination of a woman or an African-American, and they develop a sudden, unlikely interest in one of the second-tier Democrats, these voters could very well decide the nomination. If Clinton gets even half of them, she'll be almost impossible to beat. But if they break disproportionately toward Obama, Clinton is going to have to do something she would very much prefer to avoid -- emerge from her cocoon of control and composure to start mucking it up with the boys, and that could doom her candidacy.

Whatever else Americans think of the former first lady, nobody can deny that Sen. Clinton is a tough, policy-smart, unflappable candidate who is more self-disciplined than her husband ever was. Moreover, she is building a campaign organization so complete it will effectively serve as a shadow Democratic National Committee. She will not need so much as a dollar, voter targeting list, volunteer hour, press release, focus group result or research memo from DNC chair Howard Dean. Her ideal scenario is to play prevent defense for the next six months, wait for Obama-mania to wane, and accept a nomination nobody else was able to take from her. She already holds an astounding lead among female primary voters, reaching as high as 41 percent.

But if Obama consolidates the anybody-but-Hillary vote, Clinton will have to get nasty. Doing so may not hurt her in the female-dominated primaries, and it may even help. But because she is Hillary -- that rare figure for whom no American is without an opinion -- the question is whether voters will hold her to a standard of conduct that they wouldn't apply to any other candidate. When CNN's John King interviewed Clinton about the scuffle with Obama, he noticed that she started her response by laughing -- something she does right before she attacks, as a way to soften not so much the criticism to follow but the critic herself. "She wanted to laugh it off, number one -- don't be the cold, calculating Hillary Clinton, that perception some people have of her," recounts King. "But then she makes her point: 'I've been called a lot of things in my life ... but never George Bush, but never Dick Cheney.'" She has to express humble umbrage because the rules of engagement for her are different.

That leaves Obama. Despite all he offers -- the biracial biography, the charisma, the fundraising prowess, the Oprah Winfrey alliance -- the Illinois senator has two serious liabilities. The first, as a recent Slate piece by John Dickerson neatly summarized, can be posed with a simple, five-word question, "What has he ever done?" It's convenient to cite a certain Illinoisan's even thinner pre-presidential résumé, but the lack of even a short list of substantive achievements is hardly an asset. The Clinton-Obama spat that began during the CNN/YouTube debate brought the issue of his experience to the fore. "The reason the fight flared so fast can be found in this result from Gallup poll: The key and overwhelming reason voters prefer Clinton to Obama is that they believe she has more experience," observes Dickerson. "That, and the fact that it finally gave Clinton a chance to call Obama 'naive.'"

Obama's other primary-race problem is less obvious. The media mentions it only as an occupational complaint, and it may turn out to be a general election advantage: He's good, but overrated, as a stump speaker. Not only do his big-change, baby-bust-out themes form the core of his standard speech, but he also sandwiches them around tailored addresses to specific groups. At a major Planned Parenthood event in Washington last month, for example, a much smaller portion of Obama's address than Clinton's was topic specific, giving him room for his change-our-politics themes. The boilerplate refrains cause heads to nod the first time but wear thin with repetition. In the general election, as George W. Bush proved in 2000, endlessly repeating a few simple themes works; in a primary, where differentiation and intraparty coalition building is essential, the species that evolves survives.

In how many of the eight presidential cycles since Richard Nixon's reelection can the Democrats fairly be said to have been the clear favorites a year before the election? The 1976 election for sure, and maybe 1988 and 2000. (Recall that in both 1991, following the Gulf War, and 1995, following the Republican capture of Congress, neither of Democrat Bill Clinton's eventual victories seemed inevitable.) Though head-to-head matchups suggest a close race between any of the top three Democrats and the major Republican contenders, not since 1964 have Democrats enjoyed such an advantaged position a year out. According to a June NBC News/Wall Street Journal poll, in a generic presidential matchup the Democrats have a 21-point advantage, 52 percent to 31 percent. In the past 60 years, only once has one party won three presidential elections in a row, further stacking the odds against the GOP.

But presidential elections aren't team competitions between generic party reputations -- they're contests between individual nominees. And the truth is that all three major Democratic candidates have shortcomings. Edwards lacks national security credentials, Clinton revives all sorts of culture war complications, and Obama has little record to tout. If there were a Democratic Dr. Frankenstein, he would fuse Edwards' retail skills, Clinton's operational discipline and Obama's dynamism into an unbeatable Super Candidate. Republicans will have some key weaknesses to exploit and, though their field is not as strong overall, one weakness from which the GOP never suffers is an inability or unwillingness to go for a Democratic candidate's jugular.