At a forum on LGBT rights, the issue of same-sex marriage left the Democratic presidential front-runners looking like they had two left feet. 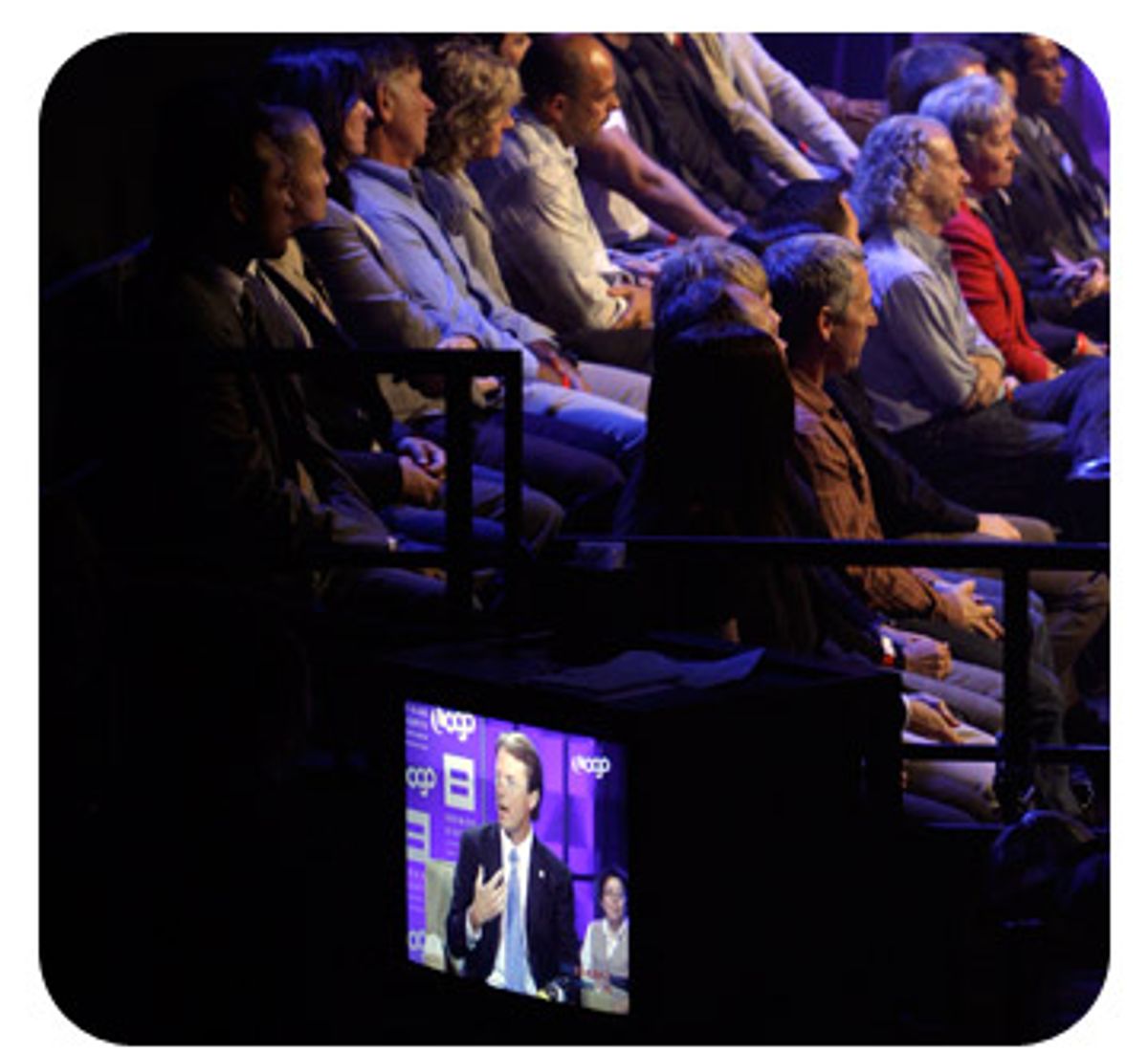 Six of the candidates for the 2008 Democratic presidential election were in Los Angeles Thursday night for a forum about the rights of gay, lesbian, bisexual and transgendered people. It's the only such event that will be held; none of the leading Republican candidates accepted an invitation to appear at a second forum. So while the evening's sponsor, the LGBT advocacy group Human Rights Campaign, billed the event as nonpartisan, it was clear which party is interested in the support of LGBT voters.

But while the Democrats are united in endorsing most of the HRC's positions, the pivotal issue Thursday night was the only one on which they differed. It is also, perhaps not coincidentally, the one that carries a potential political price: Support, or lack thereof, for same-sex marriage. It's still a risky campaign issue; a Newsweek poll from this March showed that 38 percent of the country says that, taken alone, a presidential candidate's strong support for same-sex marriage would cause them to vote against that candidate. So it wasn't surprising to see the candidates with the most to lose -- Barack Obama, John Edwards and Hillary Clinton -- dance around the issue. What was surprising, though, was how unprepared they seemed for questions they should have anticipated, and how their tone-deaf, unpolished responses nearly handed the debate to the party's two fringe candidates, Ohio Rep. Dennis Kucinich and former Alaska Sen. Mike Gravel.

The forum, televised by MTV's gay-oriented Logo network, had been trumpeted as a historic first. As blogger Chris Crain has pointed out, that's not really true -- HRC held a similar forum for the last presidential election -- but this one, moderated by Bloomberg News' Margaret Carlson and featuring a panel composed of singer Melissa Etheridge, Washington Post editorial writer Jonathan Capehart, and HRC president Joe Solmonese, drew greater attention. Apparently, that attention made the top four candidates appear a little nervous.

Obama was the first to take the stage, and he set the tone for the front-runners. Perhaps his most consistent message was that because he is African-American he understands the importance of equality under the law; that's why, he says, that even though he does not support same-sex marriage, he supports civil unions, which are far more popular with the country and would grant same-sex couples equivalent legal rights. But that position opened the door for Solmonese, who asked Obama, evoking the language of the landmark Supreme Court segregation decision Plessy v. Ferguson, "On the grounds of civil marriage, can you see to our community where that comes across as sounding like 'separate but equal'?"

Obama could do little but dodge.

"Look, when my parents got married in 1960, '61, it would have been illegal for them to be married in a number of states in the South. So obviously this is something that I understand intimately," he said. "But ... if I were advising the civil rights movement back in 1961 ... I would have probably said it's less important than we focus on an anti-miscegenation law than we focus on a voting rights law, a non-discrimination employment law and all the legal rights that are conferred by the state."

Edwards, who was the party's 2004 vice-presidential nominee, had similar trouble. The former senator, born in South Carolina and raised in North Carolina, seemed to be competing with Obama as to who could rack up more mentions of their personal understanding of the trials of segregation and inequality. Edwards has said previously that he opposes same-sex marriage because of his religious faith. But when questioned about that by Solmonese, Edwards intimated he'd had a change of heart.

"I have to tell you, I shouldn't have said that, because first of all I believe to my core in equality," Edwards said. "It makes perfect sense to me that gay and lesbian couples would say, 'Civil unions, great. Eleven hundred federal benefits, great. Give us these rights, we deserve these rights.' And they're absolutely right about that. But it stops short of real equality. It makes sense that people would feel that way. I mean, I totally, I can understand it."

He avoided addressing the question of his position in that answer, but when asked again, he admitted that despite his new understanding, he still opposes same-sex marriage.

Clinton had missteps of her own. Solmonese caught her, too, saying her position that marriage should be left to the states was reminiscent of segregationists' "states' rights" argument. Clinton didn't even pause to engage that, staying doggedly on message and telling Solmonese that she "really respect[s] the advocacy that the community is waging on behalf of marriage."

And in her final statement, Clinton all but said some of her best friends are gay, insisting, "I come to these issues not as a senator or as a lawyer or as a presidential candidate but as a friend of a lot of members of the LGBT community."

Still, no one performed as badly as New Mexico Gov. Bill Richardson, who covered himself in flop sweat. Richardson, echoing Obama and Edwards, made sure to emphasize that he understands where LGBT people are coming from, in his case because of his Hispanic heritage. At first he seemed to be the most forthright of the group, saying his opposition to same-sex marriage is because it is not "achievable" politically, while civil unions are. But, when Solmonese asked what he would do if presented with a same-sex marriage bill by the N.M. Legislature, Richardson's position fell apart. Richardson was forced, after a non-answer and a follow-up, to all but concede that one of the places support for same-sex marriage is not yet achievable is in his own heart.

Afterward, tossed a softball by Etheridge, who asked whether he feels that homosexuality is natural or a choice, Richardson whiffed, saying, "It's a choice." Even after an unsubtle hint from Etheridge that, given the audience, he might want to rethink his answer, Richardson was unable to recover. "I'm not a scientist," he said wanly.

All these missteps gave the race's forgotten candidates, Kucinich and Gravel, both of whom support same-sex marriage, a chance to shine. They almost did.

Gravel, who was originally not invited to the forum, had one of the night's best lines. Asked by Capehart why Clinton, Obama and Edwards are leading the race, Gravel said, "They're playing it safe. They're not going to lose any votes over not being for [same-sex] marriage, whatever their issues are ... So you want to know the difference? It's as plain as the nose on your face ... what you're experiencing is politics as usual. And a gifted politician can tell you -- and I don't mean this humorously, I mean it very accurately -- a good politician can tell you to go to hell and make you look forward to the trip." But Gravel stepped on the goodwill he created a little too often, giving some rambling, irrelevant answers and at one point rattling off the first names of anonymous Alaskan gays who support him.

Of all the candidates, Kucinich was, at least initially, perhaps the most compelling. His stance -- that if the other candidates were really serious about equality they'd support true equality to love -- was easily the least convoluted of any of the arguments raised at the forum.

But Kucinich didn't hold on to the momentum for long. He soon started sounding less like a presidential candidate than like someone who got lost on his way to the taping of the Beatles' "All You Need Is Love." And with his closing statement, he again exiled himself to the margins of the campaign. After pausing without warning for a long moment of awkward silent meditation, he leapt up and exclaimed, "I send you great love. I want you to know that the love of country, the love of equality, is something that every one of us embodies. But we need a president who's ready to testify to that, to be an exemplar of equality, to understand love in the deepest sense ... I love all of you. Thank you so much for the chance to be here."

Unlike Kucinich, two of the Democratic candidates -- Sens. Chris Dodd and Joe Biden -- didn't take the chance to appear at the forum. Given the performances of some of the candidates who did show up, the "scheduling conflicts" Dodd and Biden cited seem almost merciful.