Self-consciously quirky on the outside, this gentle teenage fable has an affecting, openhearted core. 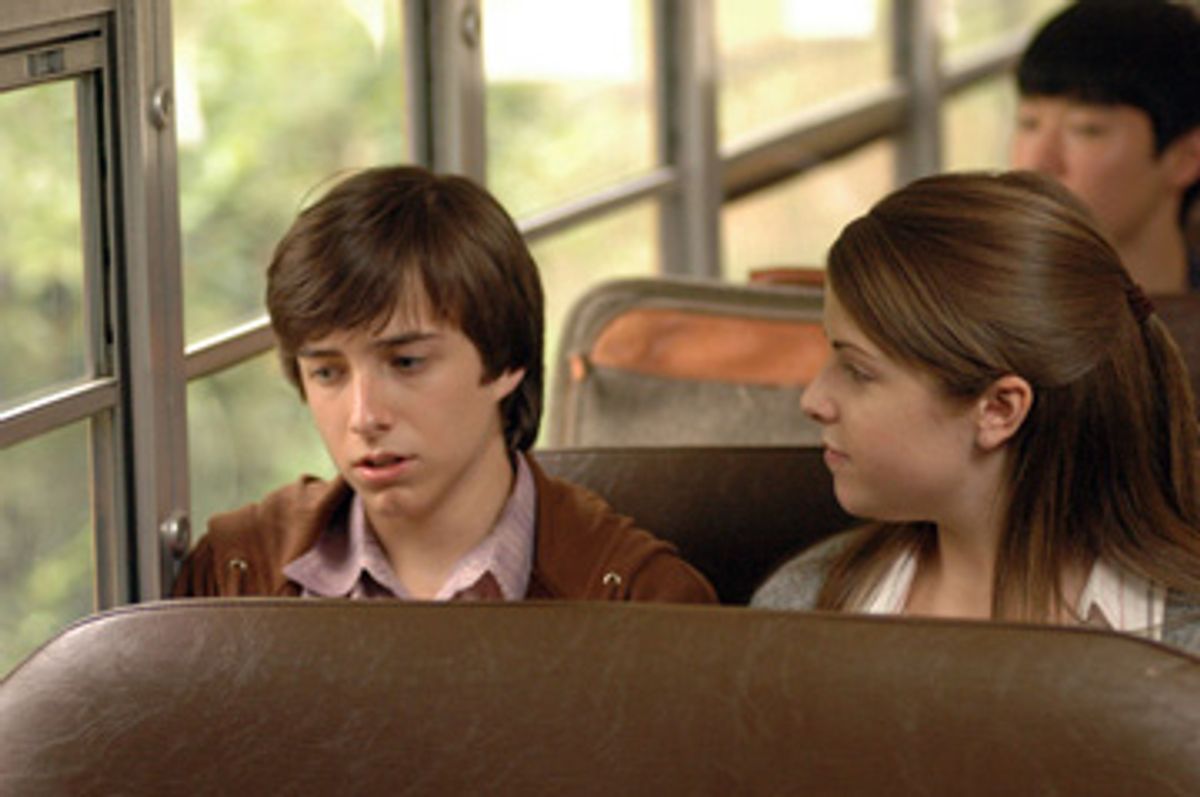 Jeffrey Blitz's gentle, slightly out-of-whack teenage fable "Rocket Science" is a well-meaning little picture that's piercingly genuine in places and annoyingly affected in others. To get to the heart of the story, you have to get past some of the filmmaking: This is Blitz's fiction-feature debut (his first picture was the wonderful 2002 spelling-bee documentary "Spellbound"), and there are places where Blitz doesn't quite know how to control the movie's aggressively quirky rhythms. Blitz also frames the story with an unnecessary and pretentious voice-over narration, as if he doesn't trust us to simply watch and listen to the story he's telling -- as if, left to our own devices, we might not get the point.

But once you crack the self-conscious veneer, there's no doubt there's an openhearted movie underneath. Hal Hefner (Reece Daniel Thompson) is a suburban New Jersey kid who seems to have every card stacked against him: His father (Denis O'Hare) has just split on the family, and Hal's domineering older brother, Earl (Vincent Piazza), has taken this as his cue to become even more of a crazy bully. Hal also has a stuttering problem, which makes high school a nightmare for him. An exceedingly bright kid, he knows all the right answers in class: He just can't squeeze the words out. In the cafeteria, unable to tell the lunch lady he'd prefer pizza to fish, he always ends up with the inferior slop.

Hal is probably the least likely candidate for his school's debate team. But the team's star, the ambitious and possibly ruthless Ginny Ryerson (Anna Kendrick, in a sharp-edged but sensitive performance), recruits him to be her partner. "Deformed people are the best," she tells him plainly. "Maybe because they have a deep reserve of anger. It serves them well."

"Rocket Science" is partly an exploration of the futility and awkwardness of first love, but it's mostly a meditation on how miserable it is to be a teenager with no confidence. Blitz (who also wrote the script) has so much feeling for his characters -- even the ones whose behavior or motives are questionable -- that we can't help feeling for them, too. The picture may be slightly affected at times, but it's never smug, and Blitz has a good ear for the ways grown-up authority figures so often feel they can get away with blowing smoke -- figurative smoke, that is -- in kids' faces. At one point the speech therapist Hal works with at school (he's played by the dry and droll Maury Ginsberg), offended because Hal thinks the anti-stuttering exercises he's cooked up are just dumb, tells him, "It's really a shame that you're not hyperactive. That I can work miracles with."

The funniest bits in "Rocket Science" come wrapped in emotional barbed wire: Frustrated because Ginny appears to have abandoned him, Hal gets drunk (we see him swigging from a bottle of scotch with crazy abandon) and tosses a cello through her living-room window -- only it takes him three clumsy tries before he actually busts the glass.

Blitz clearly knows how to trust his actors, and Thompson makes even the trickiest scenes work. At first, I wasn't sure he could carry a whole movie on his narrow, bony frame: Thompson's face looked a little too closed off to me, and I worried that there might not be enough there there to hold the camera. But Thompson's performance is deeply touching without ever being cloying or precious. Hal's eyes say everything, even when nothing will come out of his mouth. Just the sight of him, pedaling down those manicured suburban streets on his low-slung banana-seat bike, with his too-long pants and his defeated, hunched shoulders, brought back a stabbing memory of what it was like to be 15 and hopelessly awkward. In the end, Blitz is generous with all of his characters, and especially with Hal: "Rocket Science" isn't perfect, but then again, movies made from the heart rarely are.