The collapse of Karl Rove

The Pygmalion strategist from Texas built up the Republican Party by exploiting the religious right -- and now his handiwork is crumbling. 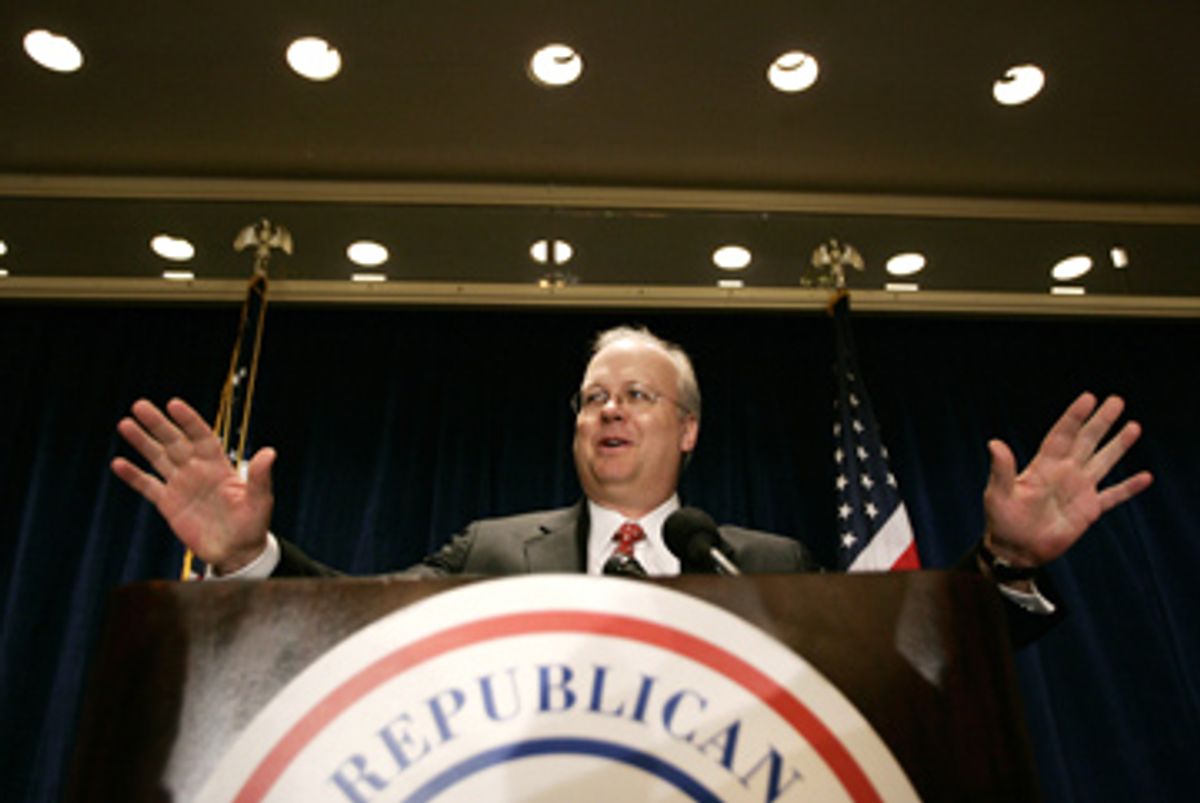 A month ago, a friend who has spent his entire career working for the Republican House leadership pulled up beside me at the intersection of Seventh and Pennsylvania in Washington. A House institutionalist, and a fiercely partisan secular Republican, he was oddly cheerful. "Call me next time you're in town," he said. "We'll talk about how George Bush destroyed the Republican Party."

It will be a long conversation.

But the president doesn't get all the credit. If Karl Rove was responsible for the remarkable ascent of the Republican Party since 2000, he is equally responsible for what is beginning to look like its vertical collapse. With the Christian right deeply disappointed at Bush and in search of a candidate for the 2008 election, economic conservatives alienated by the White House's failure to impose fiscal discipline on the Congress when the Republicans were in charge of both houses, and congressional Republicans caught in the undertow of a failing president's failed war, the party Rove predicted would become a permanent majority is no more. Rove could put the party together, but in the end he proved incapable of holding it together.

In Texas, we saw this modern iteration of the Republican Party come together in the summer or 1994, as Bush kicked off his first successful run for public office. (He had lost a congressional race in West Texas in 1978, in which Rove was only marginally involved.) Social conservatives had already joined together with economic conservatives when Ronald Reagan got into bed with the Rev. Jerry Falwell. But it was Rove who consecrated the union. A nominal Christian and Episcopalian, Rove had little regard for the evangelical extremists who have become essential to the success of the modern Republican Party, even cracking the occasional joke about his own lack of faith.

Then the Christian right showed up at the Republicans' state convention in Fort Worth, in 1994, with enough delegates to seize control of the party. The dominant Christian faction tossed George H.W. Bush's handpicked state chairman and longtime friend, Fred Meyer, out of office and replaced him with a charismatic Catholic lawyer from Dallas. It banned liquor from convention hotels and replaced hospitality-room bars with "ice cream sundae bars," where chefs prepared designer confections. It summoned delegates to Grand Old Prayer Sessions, required Christian fealty oaths of candidates for party leadership, and made opposition to abortion the brand by which Texas Republicans would be defined.

This political great awakening was not unique to Texas. But it occurred in a context in which a brilliant, Pygmalion political consultant saw in George W. Bush a malleable idol who could be fashioned into a governor and ultimately a president. And Bush was a candidate whose genuine evangelical faith was an asset rather than a liability. After initially fighting the dominant evangelical delegation at the state convention -- proposing Texas Rep. Joe Barton as a compromise candidate for state party chairman -- Rove joined them.

He found religion, even if he didn't find Jesus. And it was a foxhole conversion at best. Rove had been brought to Texas by the elder Bush in the early '80s and devoted his energies to building a Republican Party where there was none -- using direct mail, money and databases in ways that Texas Democrats never imagined. There was one statewide Republican elected official when Rove began his work, U.S. Sen. John Tower. Today, Republicans hold all 22 statewide offices. But the party Karl Rove built was based on the economic conservatism of Barry Goldwater, not the social conservatism of Jerry Falwell. Once Bush was elected governor, Rove marginalized the Christian right's party chairman, Tom Pauken, denying him access to party money, and when Pauken ran for state attorney general, Rove quietly assisted the campaign of his primary opponent, John Cornyn, who now represents Texas in the United States Senate. Yet despite the low regard in which he held evangelicals, Rove recognized the importance of keeping them in harness with economic conservatives.

The "guns, God, and gays" campaigns that defined Texas politics and the politics of the South became the model for Republican Party campaigns across the country. It was Rove who was responsible for the whispering campaign that characterized Democratic Gov. Ann Richards, Bush's opponent in the 1994 governor's race, as a closet lesbian, in a successful attempt to peel away conservative Christian votes in East Texas.

Perhaps the most recent example of a successful social-issues campaign was in Ohio during the 2004 election, which provided critical electoral votes to secure George Bush's second term. With Bush in peril of losing to John Kerry, the Republican National Committee looked to David Barton to go into Ohio and turn out the base. Barton is a former vice chairman of the Texas Republican Party and one of the founders of the WallBuilders, a Christian advocacy group working to restore God to His central position in American history, and in the history and social studies curricula of the nation's public schools.

Barton comes straight out of the social conservative wing of the Republican Party Rove put together and then left behind in Texas when he followed Bush to Washington in 2001. And Barton represents both the success and what now might be the failure of the Republican Party Rove cobbled together. U.S. District Judge John E. Jones III mentioned Barton by name, in his 2005 opinion that declared "intelligent design" (biblical creationism dressed up as science) unconstitutional to teach in the nation's public schools. Jones, a George W. Bush appointee to the federal bench, was particularly offended by the Dover, Penn., school board president's stated intention to move from Christian intelligent design in biology classes to Christian social studies in history classes. The judge cited both Barton and his book, "The Myth of Separation," as examples of a school board that was in open violation of the Constitution. (WallBuilders do not recognize the separation of church and state as defined by the First Amendment.)

In Pennsylvania, Judge Jones' angry repudiation of the Christian majority on the school board was both a portent and part of the dissolution of the union over which Rove presided in 1994 in Fort Worth. Jones, a Tom Ridge protégé, was unequivocal in asserting the primacy of the Separation Clause over the religious interests of local governing bodies. Like this moderate judge, the larger public -- and even the Republican Party, if the candidacy of Rudy Giuliani means anything -- has grown weary of the Christian right. It was a marriage as unlikely as the union between an evangelical George W. Bush and Episcopalian Karl Rove.

It appears that it's over. As Rove returns to the Hill Country home in Texas he and his wife, Darby, bought and refurbished, the party in which he invested his energy, if not his soul, is divided among social and economic conservatives. Even Texas Sen. John Cornyn, a one-time moderate who drank the Kool-Aid with the Christians in the Texas Republican Party, is in trouble with the state's voters. Cornyn, like Bush, was a creation of Karl Rove. Maybe Rove can save a Senate seat, if not his soul, by quietly throwing in with Cornyn's campaign, after he settles back down in the state where it all began.