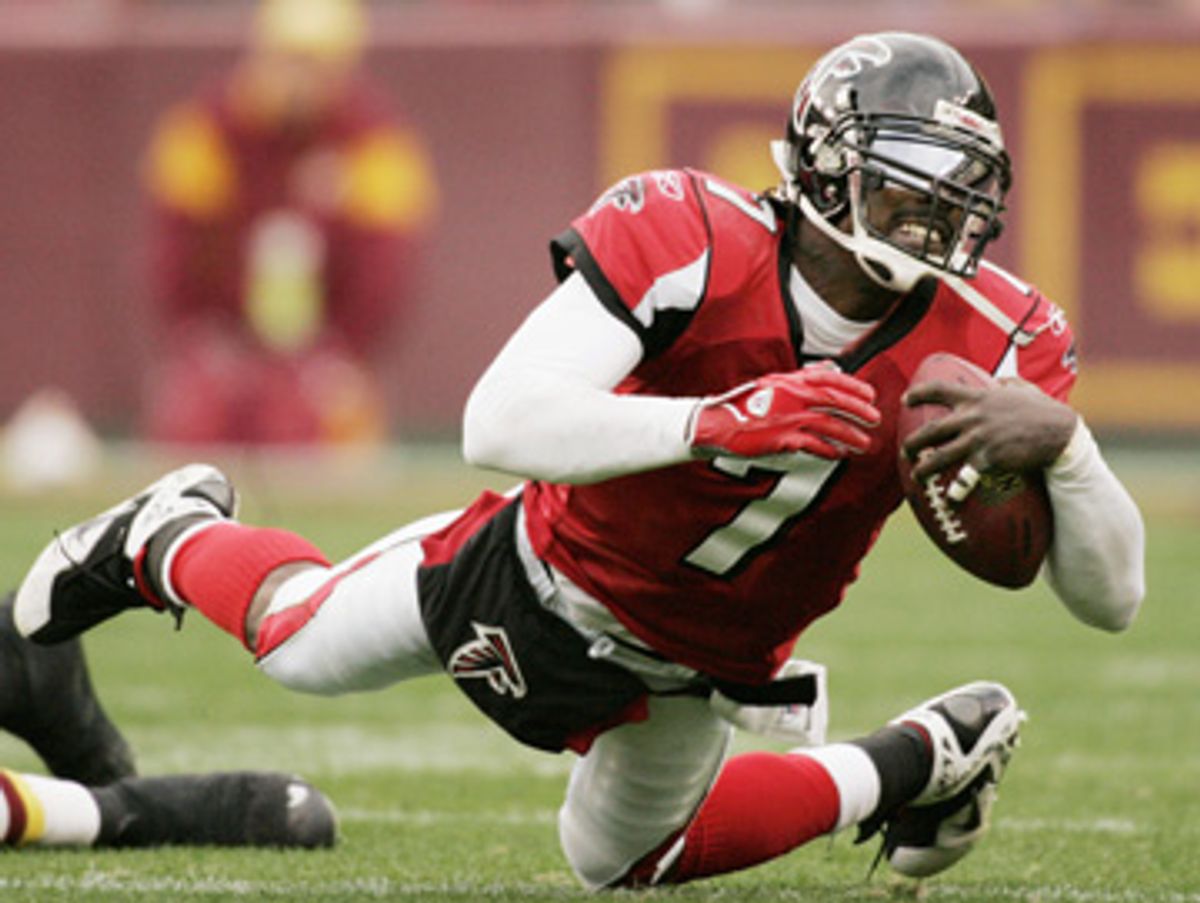 "The Outsports Revolution," the first book by the founders and editors of Outsports, the leading gay sports Web site, has a little something for a lot of people.

Gay and sports-phobic? There's advice about how to get over the horrible gym-class memories many gay men share and relate to jock friends and significant others, right down to co-founder Jim Buzinski's recipe for the perfect Super Bowl chili.

Buzinski and Cyd Ziegler Jr. also offer lists of the best gay-themed sports books and movies, discussions of sports fashion -- Speedos good, baggy basketball duds bad, is how they see it -- and serious consideration of some of the issues gay athletes and sports fans face. Plus, at the behest of the publisher, Ziegler says, great bunches of photos of buff dudes at sporting events.

Those shots echo one of the most popular features of the Outsports site, the photo galleries. "The Outsports Revolution" includes a fascinating e-mail exchange between Buzinski and "Timmy," who said he was a closeted professional athlete whose name wasn't anything like Timmy.

Timmy objected to the photo galleries on the site, arguing that they confirm the mainstream's stereotype that "if we're gay, we'll want to 'sexualize' our sport."

He wrote that he realized the galleries of rugby and water polo players hugging and kissing were probably very popular, "but do you honestly expect 'straight america' to take us seriously when this is the first image we're putting out about ourselves?"

"Your concerns, interestingly enough, have virtually never been voiced by the 'mainstream,'" Buzinski wrote back. "We hear these criticisms from time to time, but they mostly come from other gay people ... We get the sense sometimes that we must portray ourselves as celibate monks to satisfy these concerns."

Ziegler echoed that sentiment Monday. "We don't try to undermine gay stereotypes," he said. "We simply try to be who we are."

What's the state of the gay sports world in the summer of 2007?

For the sports fan, and this would be similar for the elite gay athlete, sports have changed a lot. There are gay-friendly voices that are willing to speak and have gotten louder in recent years, certainly in reaction to Tim Hardaway's reaction to John Amaechi's coming out. They certainly made themselves heard. I haven't heard a negative story of an athlete coming out of the closet in high school, professional or collegiate athletics in at least eight years.

But there is still this perception that homophobia is rampant in sports, and as long as that perception exists, that sports are an unfriendly area to be, or at least perceived to be unfriendly, it's there and it affects people. So in that sense, there's a lot of work to be done.

In terms of elite sports, Topic A seems like it's still "Who's gay? When's that first gay athlete going to come out in American team sports?" Is that a fair statement?

And certainly that first active athlete coming out of the closet will be the biggest news story you can dream of. But meanwhile, having Shaq saying what he says and Dwyane Wade saying what he says [Wade and Shaquille O'Neal, the two Miami Heat stars, both made supportive comments after Amaechi's announcement], I think that, I don't know if it's the focus, but it's getting a lot more attention than it used to. It's much more important than it used to be.

People wanted an athlete to come out in a vacuum, and now I think people are more interested in creating a gay-friendly space for them to come out into.

There is absolutely no reason to believe that it is going to be a negative experience. From surveys of players to surveys of fans, fan reaction to retired athletes coming out, media reaction to the same thing, media reaction to gay issues, it has changed a lot. And while I don't think the media is very proactive in tackling gay issues in sports -- as a general rule, I'm not saying everybody -- they are very positive in their general reaction to stories.

Whenever you do something in a locker room, somebody's not going to like it, unless you're scoring a touchdown or hitting a home run. So if you're in a Heat locker room with Tim Hardaway, Dwyane Wade and Shaquille O'Neal, and Tim Hardaway doesn't like it, and Shaq and Wade welcome you with open arms, how is that a bad experience?

Where does this myth come from that it's going to be so impossible for the first gay athlete, or for any gay athlete?

You hear this from the media. You know, I was watching "PTI" when Hardaway said what he said, and [Michael] Wilbon and [Tony] Kornheiser were both incredibly supportive, incredibly positive about Amaechi, ripped Tim Hardaway a new one, but said at the end, "But we all know that it's impossible for an athlete to come out of the closet because he would be ostracized and kicked off the team."

There's just this assumption that the media keeps putting out there. I think that's the biggest problem. The media. Guys in the media, even though there's a positive portrayal of gay issues in sports, they continue to push this idea that the locker room is a super-macho place and no gay person could exist in it.

Assuming "which pro athlete is going to come out?" is Topic A, which I guess you're not totally with me on --

Oh, no no no! It's Topic A, for sure. It's just that, a couple years ago it was Topic A, and there wasn't a Topic B, C, D, E-F-G-H-I-J-K or anything else. Now, there are other things in the consciousness.

That's where I was going. What's Topic B?

I think straight allies. And that goes beyond just the gay sports world. Gay politics, gay everything. You can't advance equality without the people in power. That's No. 2.

Well, you know, there are people in the gay community who don't want to include transgender people in the conversation about gay issues. To me, this is a fascinating issue and it's something I've been writing and reporting on for many years. But I think most gay people don't even think about transgender issues, and that's a shame because you meet these people and you talk to them, and the struggle that they go through is so far beyond anything that 99 percent of gay people go through. I feel for them.

I wonder if that provides some insight. It always seems odd to me when someone from a minority background in this country can't empathize with the discrimination gays go through. It's also surprising that gays don't think about transgender issues. It seems like it'd be a lot of their own problems, just magnified. I'd think there'd be empathy.

Don't get me wrong. There is empathy. And I think a lot of or most gay people do consider transgender people their brothers and sisters. But everybody wants to think they're special. So the issues that black people went through were special, the issues that women went through were special, and they're different from gay people and Hispanics and everything else. At the end of the day, discrimination for who you are is discrimination.

One of the things that really struck me over the years I was in the Midwest was, listening to sports radio there, how often gayness came up, in this very straight, a.m. sports-talk radio world. And the way it came up was this joking, not God-hates-fags kind of way, but: We all understand that none of us are gay and we're joking about it. If I were a gay person I'd think it was clear these guys were not talking to me. It was this weird kind of friendly but casual homophobia. And I guess my dumb question is: What's the deal with that?

I think it's great. I used to do a segment on the Kylie and Booms show on Fox Sports Radio. The segment was called "Fag Fridays" and I did "Cyd's Fag Five," where I picked five football games against the spread. And for 15 minutes a week, on one of Fox Sports Radio's most popular national shows, we gayed it up, me and two straight guys. It was hysterical.

I think humor is a wonderful tool. It disarms people. And there's nothing wrong with having a little fun with being gay. I think the gay community as a whole has lost its sense of humor. I think it's lost the ability to laugh about itself.

But what got me was it always seemed to end up, if they were joking about kissing each other or something, they'd always make sure to say, "But hey, listen, we don't go for that stuff around here. None of us are funny like that." It was always that little punctuation that said, "Don't worry, nobody's really gay." That's what seemed off-putting to me.

I can understand that. I don't think there's any need for them to say that. That's more their insecurities and how they'll be perceived walking down Main Street. But the humor itself, I don't have any problem with, and in fact I wish more straight guys would joke about kissing each other. When you do that, I don't know, it just makes you more comfortable with the issue. It's funny, it gets it into the public consciousness.

People have this idea that one of our goals is to undermine gay stereotypes. That's not one of our goals. We don't try to undermine gay stereotypes. We simply try to be who we are, offer information and entertainment, and let people make their own choices. Yeah, we gay it up, and I don't think there's anything wrong with it. I think it makes gay people more palatable to your average, beer-drinking, La-Z-Boy-sitting sports fan.