The pod people are back -- and they're coming for Nicole Kidman. 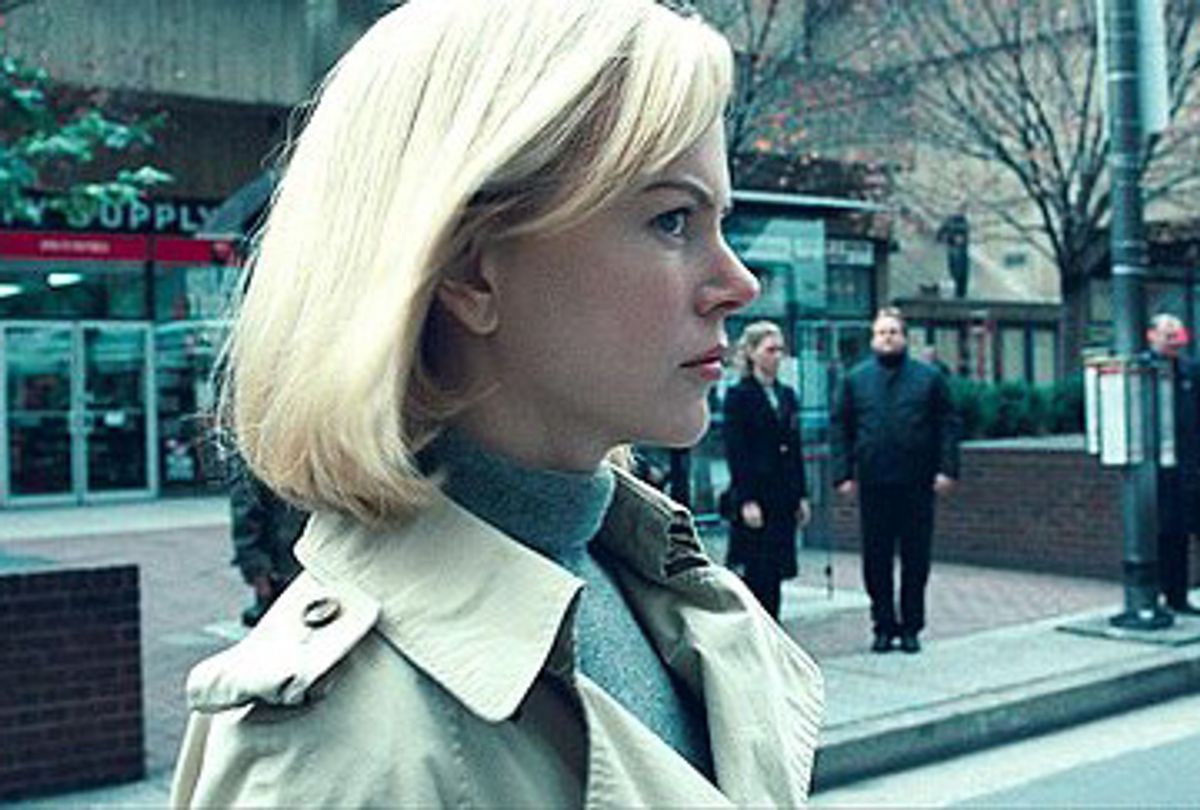 "My husband is not my husband." That's the jittery assertion of Wendy Lenk, a patient in the office of crisply beautiful Washington, D.C., shrink Carol Bennell (Nicole Kidman). While the good doctor blithely dismisses her client's suspicions with a wave of the prescription pad, something has indeed gotten into Lenk's spouse: something that can suck out a person's humanity in the course of a nap, something that has come from far, far away. For every generation, there is a "Body Snatchers" -- and Oliver Hirschbiegel's "The Invasion" is the least welcome return of the pod people yet.

This time around, a space shuttle has exploded, and Tucker Kaufman (Jeremy Northam), a Centers for Disease Control and Prevention official and Carol's ex-husband, is called in to investigate some wreckage that he is warned "ain't from around here." Kaufman is no sooner at the site than he comes in contact with mystery slime, and overnight he's blinking less and talking in a monotone more. Soon dogs are growling at blank-eyed humans. Elevator doors are closing just in the nick of time. Earth is facing its greatest enemy -- B-movie clichés.

Spreading themselves around through a clever flu-shot campaign and the more personal method of horking on people, the aliens, as our helpful scientist/bringer of exposition (a criminally underused Jeffrey Wright) explains, integrate into human DNA during REM sleep and then mimic their hosts. It's that premise -- one that repeats itself in the myths of the incubus, succubus and Freddy Krueger -- that makes the "Body Snatchers" concept so unnervingly persistent. In the surrender of sleep, we lose ourselves. What if we couldn't get ourselves back?

After her son, Oliver (Jackson Bond), disappears while visiting Tucker, Carol goes searching for him -- and evidence of a conspiracy -- with her besotted, woefully platonic "best friend" Ben ("Casino Royale's" Daniel Craig). When Ben is later shown primly making pancakes, one gets the discouraging sense that even after a sleepover, his virtue is still intact. Frankly, any civilization that puts Daniel Craig in a movie and doesn't show him getting it on is a civilization that just might deserve conquest by goo.

The original 1956 "Body Snatchers" served as either a Cold War fable about the evils of communism or a deft condemnation of our sheeplike fear-mongering about the same, depending on your interpretation. Philip Kaufman's 1978 remake was a timely exploration of the post-Watergate and Vietnam generation's collective loss of trust. Abel Ferrara's 1993 reworking of the tale focused on what happens when we put our faith in the military. So now, in an era when the term sleeper cell is the stuff of headline news, what better time to reinvent science fiction's allegorical heavyweight champ?

The problem with Hirschbiegel's ("Das Experiment," "Downfall") convoluted, car-crash-laden "Invasion" is that it doesn't know what symbolism it wants to grasp. Is this mess of a film, which has endured rewrites by the Wachowski brothers and reshoots by director James McTeigue, a dark meditation on our overmedicated culture? A warning about how vulnerable we are to threats from the outside? A coda on what happens when we unquestioningly accept the lies our government doles out? Or just a big exploding pile of nonsense? When Roger Rees, sporting a Russian accent for maximum gravitas, rails against the "veneer of civilization" and everything in it, from the pharmaceutical industry to Darfur, Sudan, one suspects the answer is "all of the above."

Unlike our replicant would-be overlords of "Battlestar Galactica," who "have a plan," these invaders are muddled in their mission. They offer world peace -- they get us out of Iraq and appear to have loogied even in Kim Jong Il's cornflakes -- but they're also Molotov-cocktail-tossing, taser-happy thugs. They're devoid of feeling but they look pretty pissed off when they don't get their way. What do they want? Are they just trying to conquer the planet so they can sit around vacantly watching TV? (A few days on Earth will do that to you.)

"The Invasion" does contain moments of updated inspiration -- conspiracy validation via Google, the way a press conference held by automaton government officials sounds just like a press conference held by ostensibly human government officials. Would that the film had shown more of that confident wit, more elegiac despair for the loss of individuality.

Yet what might have been the movie's worst misstep turns out to be one of its few clever conceits. The child-in-jeopardy motif is an overused cinematic crutch, but the fact that the story follows a mother and son heightens the drama and works as a metaphor. What is parenthood, after all, if not a fierce protectiveness mingled with torturous sleep deprivation and the constant threat of someone barfing all over you? Contemporary horror rarely uses children well. Here they get to be both vulnerable moppets and scary little creeps, an authentic dualism that doesn't get explored much outside the world of "Harry Potter."

It's easy to take Kidman, with her movie star perfection, for granted. But as "Invasion" progresses, the blandness she exudes in her early scenes recedes. When she realizes that she can fool her invaders by hiding her emotions, that poreless face of hers simultaneously wears the mask of alien detachment, the frantic need of a mother searching for a lost child, and the weariness of a woman running on exhaustion's last fumes. There are some coolly disturbing moments as Carol placidly observes her terrified fellow humans being carted off for a little DNA reassignment.

Yet as Carol's dreamless moments tick by, the film's subtle dread ebbs away, replaced by an incoherent assortment of gunshots, screeching tires and copious Mountain Dew consumption. It's meant to mirror her deteriorating mental state, but it looks more like it's the filmmakers who are coming unglued.

Though the film contains nods to its predecessors -- you can't have a proper alien invasion without panicky people running through traffic -- it also departs significantly from them. Perhaps the most compelling aspect of all the previous "Invasions" was their willingness to embrace the possibility that humankind might be randomly, fatally screwed. This one ultimately eschews nihilism to go chasing a convenient cure. There's a whoppingly dumbed-down epilogue that suggests we humans may be the true monsters. Our choice, it appears, is to be either gratuitously violent or soullessly brain dead. In reality it doesn't have to be one or the other. "The Invasion," after all, manages to be both.