Even Fox's Chris Wallace wants to know why Bush's newly departed advisor had to paint Democrats as traitors. 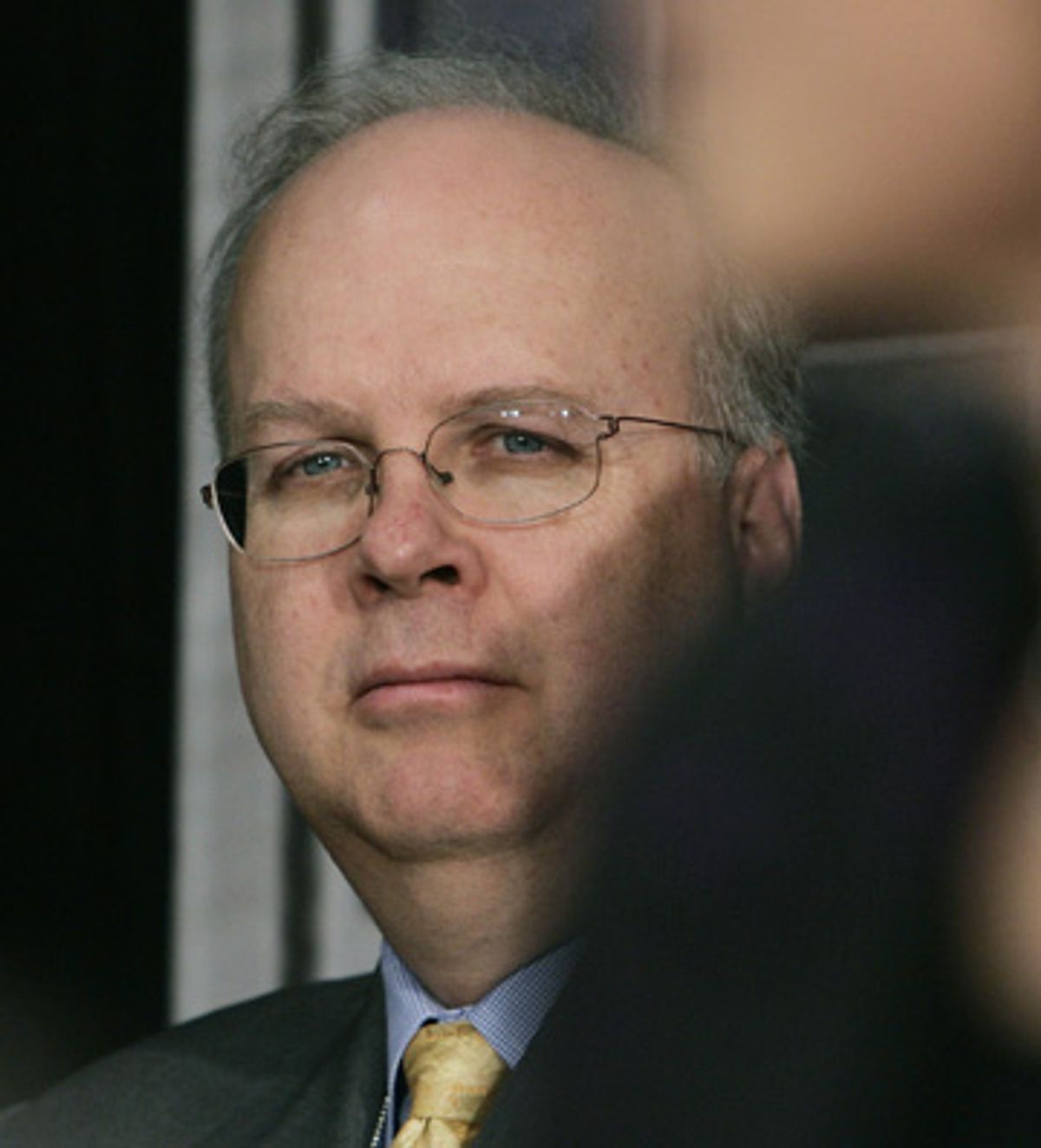 On Fox News Sunday morning, Karl Rove played the victim. He told host Chris Wallace that in the wake of his resignation as White House deputy chief of staff, his enemies were on the hunt. Rove compared himself to a legendary monster whom the ancient Anglo-Saxon hero Beowulf sought to slay. "I mean, I'm a myth, and they're ... You know, I'm Grendel ... They're after me."

But Rove, who pursued his Democratic foes with a relentless repertoire of dirty tricks, smears and outright lies, won't win many sympathizers by depicting himself as unfairly maligned. He is likely to be remembered above all for his own expertise at demonization, specifically for his ability to paint his political opponents as unreliable partners in the "war on terror" -- as traitors to the United States. A master propagandist, he portrayed his rivals as fellow travelers with Osama bin Laden, the Taliban and Saddam Hussein. Like Cain, from whom Grendel was said to be descended, Rove was more interested in fratricide than in the welfare of his people.

While the Democrats were debating on ABC's "This Week" Sunday morning, Rove appeared on the other three political talk shows. Surprisingly, it was Wallace of "Fox News Sunday" who asked Rove to defend his rhetorical legacy. For about a fourth of his interview, Wallace pushed Rove again and again to explain his willingness to cast aspersions on the patriotism of Democrats.

First, he asked Rove about the decision of the White House to turn the "war on terror" into a campaign issue in the 2002 midterms. He cited as an example the Republican attacks on Democratic Sen. Max Cleland of Georgia as weak on national security.

Cleland, a veteran who lost an arm and both of his legs in Vietnam, faced Republican Saxby Chambliss, who had never worn a uniform. Yet Chambliss lashed out at Cleland "for breaking his oath to protect and defend the Constitution," accusing him of treason. Chambliss won the election. Many believe that Rove advised Chambliss and other Republican candidates to pursue this sort of smear campaign. Terrorism, Rove observed, is a good issue for the Republicans to take to the country.

Among Rove's techniques was to identify every stance, every word, in every piece of legislation put forward by President Bush as identical with the welfare and security of the United States, and therefore any opposition to any jot or tittle of it as inimical to the country's essential interests. That is, he inscribed the nation on the person of George W. Bush, so that opposition to the president was coded as betrayal of America.

Pressed by Wallace on Sunday to explain what made Cleland a traitor, Rove responded by attacking the former Georgia senator yet again, this time for having wanted to allow employees of the Department of Homeland Security to have a union. He did not explain why such stances made Cleland a menace to the Constitution, unless one holds that unions are unconstitutional.

Wallace followed up by asking Rove to justify the notorious June 22, 2005, speech he gave before the New York Conservative Party, in which he alleged that Democrats were soft on terror. It is worth recalling at length what Rove said on that occasion: "Conservatives saw the savagery of 9/11 and the attacks and prepared for war; liberals saw the savagery of the 9/11 attacks and wanted to prepare indictments and offer therapy and understanding for our attackers. In the wake of 9/11, conservatives believed it was time to unleash the might and power of the United States military against the Taliban; in the wake of 9/11, liberals believed it was time to ... submit a petition."

Rove's diatribe depended for its effect on a series of deft substitutions, both explicit and implied. First, he misrepresented liberals by coding MoveOn.org, the grass-roots Internet activists who did urge alternatives to a frontal assault on the Taliban, as representative of liberal opinion generally. Then, by mentioning Democratic Party figures such as Howard Dean and Illinois Sen. Dick Durbin, he implied that he was speaking about that party. Unless we assume that most Democrats are not liberals, then the attack was certainly partisan. It was also false. In polling soon after the 2001 attacks, 84 percent of self-identified liberals supported military action in response, and 80 percent of Democrats favored war against Afghanistan. Democratic members of Congress largely supported the Afghanistan war as well, with the senators voting for it unanimously.

Rove also lashed out in the speech against Sen. Durbin for comparing the torture of detainees at Guantánamo Bay to torture practiced by totalitarian regimes. Torture is torture; presumably if Americans did practice torture, their methods resembled the measures employed by operatives of other governments. Rove also assumed that all those tortured were terrorists, even though we know that some were fall guys simply sold to the U.S. by local Pashtun and Pakistani opportunists hungry for reward money.

Rove, as usual, had mischaracterized Durbin's speech, which described how FBI agents who had been at Guantánamo were complaining bitterly about the use of torture. Durbin quoted former Secretary of State Colin Powell disputing the decision to cast aside the Geneva Conventions and to treat the detainees as having no rights whatsoever. After quoting an FBI agent's description of the torture practiced on the prisoners, Durbin observed:


If I read this to you and did not tell you that it was an FBI agent describing what Americans had done to prisoners in their control, you would most certainly believe this must have been done by Nazis, Soviets in their gulags, or some mad regime -- Pol Pot or others -- that had no concern for human beings. Sadly, that is not the case. This was the action of Americans in the treatment of their prisoners. It is not too late. I hope we will learn from history. I hope we will change course.

Durbin did not propose therapy for the Guantánamo detainees, but he did insist that they be treated in accordance with U.S. treaty obligations and some sort of rule of law. His stance has largely been backed by U.S. courts.

In short, everything Rove alleged in his speech to the New York Conservative Party was a falsehood. How did Rove respond to Wallace's questions about the speech? He said that he had only been talking about "four specific things," including MoveOn.org, Durbin and (unspecified) comments of Howard Dean and Michael Moore. But he had not talked only about those four things. He had been slamming "liberals" in general, with the implication that they were the Democratic Party, and had grossly mischaracterized their beliefs.

In fact, Rove's string of slanders against Durbin and the Democrats exemplified his years of service to the Bush White House, and his very career. Rove's earliest political acts were dirty tricks. In 1970, not yet 20 years old, he sneaked into the office of a Democratic candidate, stole campaign letterhead and sent out forged fliers intended to attract the wrong elements to one of the Democrats' rallies. At the height of the Watergate scandal, he discussed dirty campaign techniques with other Young Republicans, advocating going through opponents' garbage. For Rove, politics is not about principle. It is about winning, and making as sure as possible that you always win. The various scandals in which he has been involved, including firing U.S. attorneys and the outing of CIA operative Valerie Plame, were designed to make sure Republicans won elections.

What is truly striking about Rove's appearances on all the Sunday interview shows was the reminder of how unprepossessing this advocate of torture, scorched-earth warfare and carpet bombing is in person. He once said of his high school days, "I was the complete nerd. I had the briefcase. I had the pocket protector. I wore Hush Puppies when they were not cool. I was the thin, scrawny little guy. I was definitely uncool."

The modern GOP, by contrast, is meant to be the party of resolute action, not pensive, doughy geeks. Does Rove hide the disjuncture between his lack of physical presence and the overt, almost comic machismo of the Republican Party by his single-minded loyalty to a great leader? Rove himself describes his first meeting with George W. Bush as an instant political crush: "Charisma, swagger, cowboy boots, flight jacket ... wow." Does Rove overcompensate for his frailty with a savage commitment to violence and to humiliating and destroying his opponents? If so, he would not be the first specialist in propaganda of whom this has been suggested.

Joseph Goebbels, the campaign advisor for Adolf Hitler and the inventor of many of the techniques that Rove later honed, was a similar breed of nerd. The culture of the German far right was violent and anti-intellectual, which posed a challenge to a scrawny pseudo-intellectual like Goebbels. He struggled to fit in. As historian Joachim Fest wrote:


This was the source of [Goebbels'] hatred of the intellect, which was a form of self-hatred, his longing to degrade himself, to submerge himself in the ranks of the masses, which ran curiously parallel with his ambition and his tormenting need to distinguish himself. He was incessantly tortured by the fear of being regarded as a "bourgeois intellectual" ... It always seemed as if he were offering blind devotion to make up for his lack of all those characteristics of the racial elite which nature had denied him.

Rove, of course, is no Nazi. But he did continue significant portions of Goebbels' approach to politics, which depended on smear tactics, endlessly repeating lies, blurring distinctions and making sure one's own party always wins.

Now Rove's willingness to mislead the public in the service of war and violence has caused the fortunes of his party to plummet. As Iraq has become a quagmire and Afghanistan threatens to imitate it, history may even view MoveOn.org's misgivings about the latter war with some kindness.

But his most tragic legacy lay in taking something that happened to all Americans, the murderous attacks of Sept. 11, and attempting to turn those calamities into a stick with which to beat his Democratic opponents. In so doing, he desecrated the nearly 3,000 dead for petty factional gains, and wrought enormous injustices on genuine war heroes such as Max Cleland, George McGovern and John Kerry. Long after his permanent Republican majority is forgotten, Rove will be remembered for using his rhetorical gifts to divide instead of unite. As Chris Wallace, of all people, asked, "Was that a mistake?"