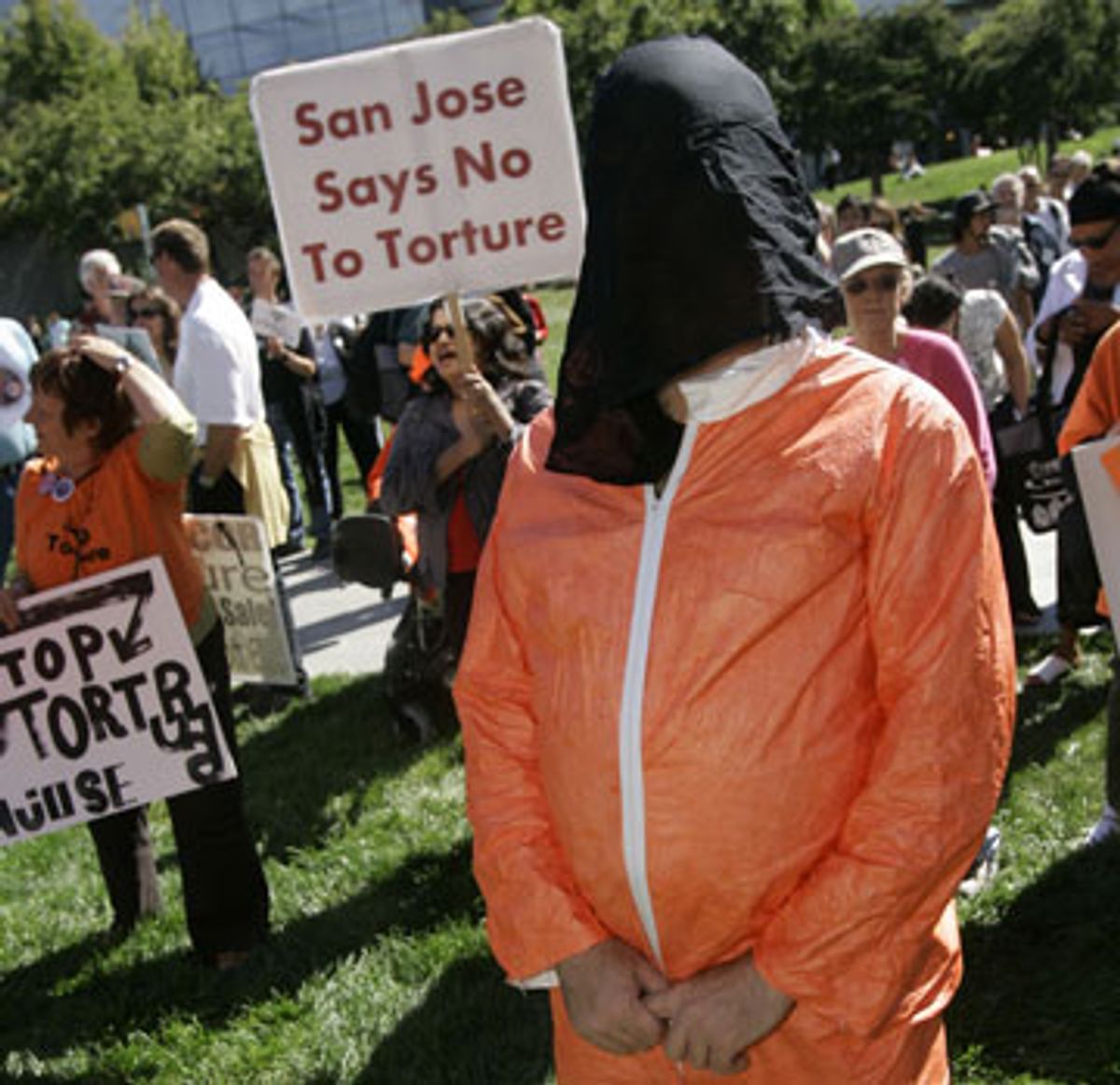 The American Psychological Association has adopted a new resolution on the interrogation of detainees in the so-called war on terror, denouncing a list of specific interrogation techniques including some allegedly employed by the CIA.

The move comes after months of revelations that exposed how psychologists helped develop coercive interrogation programs after 9/11 for the intelligence agency and the military, and weeks after the White House announced the renewal of the CIA's "black site" interrogations -- likely to be overseen by psychologists.

But it was a step still mired in controversy. At their annual meeting in San Francisco over the weekend, the psychologists voted against a proposal that would have aligned them with the position taken by the equivalent associations of American medical doctors and psychiatrists, which have banned their members altogether from participating in interrogations at places like the military prison in Guantánamo Bay. Moreover, the group's new condemnation of nearly 20 specific interrogation techniques, in a 174-line resolution that "unequivocally condemns torture," contains gray areas that left some psychologists wondering if the APA played right into the CIA's hands.

The APA has condemned torture in the past. But this year the organization was responding, in part, to intense internal pressure from some members who were angered by the Bush administration's permissive interpretation of prohibitions on abuse. The new resolution aims to be more precise and detailed, articulating "an absolute prohibition for psychologists against direct or indirect participation" in brutal interrogation methods, from mock executions to waterboarding.

"The APA came in line with the minimum of its responsibilities by condemning, in certain circumstances, the most egregious forms of torture being committed in our name," said Steven Reisner, a psychologist who has been pressing the organization to withdraw from detainee interrogations. "But they left huge loopholes that permit these techniques to be used in other circumstances."

For example, the resolution denounces isolation and sleep deprivation only when "used in a manner that represents significant pain or suffering or in a manner that a reasonable person would judge to cause lasting harm." Yet, isolation and sleep deprivation are hallmark interrogation techniques reportedly used by the CIA at the black sites, and they have been honed with eerie precision by decades of practice. The CIA's infamous 1963 KUBARK interrogation manual describes sensory deprivation and the disruption of sleep patterns as central tenets of coercive interrogations, quickly provoking hallucinations and stress that become "unbearable for most subjects." That manual also notes the "profound moral objection to applying duress past the point of irreversible psychological damage."

What worries psychologists like Reisner is that the potential loophole in the APA's resolution echoes a similar one in the Military Commissions Act, which had a provision allegedly inserted into it at the behest of the Bush administration. President Bush signed that bill into law last October, setting new definitions in U.S. law for violations of the Geneva Conventions, which ban torture internationally. The potential loophole in the law comes with the criminalization of mental pain and suffering, but only damage that is "serious and non-transitory." Bush said last fall the new law would allow the CIA to continue its interrogations at the black sites.

Interrogations were clearly the hot topic at the convention, with at least a dozen packed meetings on ethics and interrogations. The convention drew protesters, including people staging Abu Ghraib-style stress positions both inside and outside the premises.

There is disagreement about whether the language adopted by the APA with Sunday's vote really does give psychologists carte blanche to keep helping the CIA use brutal mental coercion against al-Qaida suspects. Leonard Rubenstein, the president of Physicians for Human Rights and a lawyer, first suggested the explicit condemnation of CIA tactics in a June 14 letter to APA president Sharon Stephens Brehm. Rubenstein wrote that the list would provide "explicit, operational guidance" to psychologists. After the vote, he said that the long-term mental damages of psychological techniques such as long-term sensory deprivation are well documented. "We interpret this as a condemnation of the CIA's interrogation program," Rubenstein said after the vote.

But getting a straight explanation from the APA leadership on the loophole issue was not easy. Brehm, the APA president, would not discuss the interrogation issue with Salon at all when confronted after a conference panel on Saturday. Stephen Behnke, the director of the APA's ethics office who drafted the resolution, insisted on Saturday that Physicians for Human Rights had suggested some qualifying language with respect to sleep and sensory deprivation. In fact, PHR had fought vigorously against any qualifying language, including a letter sent to Behnke asking for the removal of any "qualifications" regarding sensory and sleep deprivation.

But Rhea Farberman, an APA spokeswoman, dismissed the idea of a CIA loophole. "We want to step in and say these enumerated acts are unethical and should not be happening," Farberman said. "In being specific in what we think would be unethical, we are trying to add specificity where it has been lacking, to the detriment of some detainees."

But the new resolution remained a disappointment to psychologists who believe the profession should not support the interrogation of so-called unlawful enemy combatants at all, not least because detainees have been robbed of due process at places like Guantánamo. "These detention centers by their very nature impose cruel, inhuman and degrading treatment on detainees," argued Bernice Lott, a member of the APA's council.

What's at stake with the APA's role was made clear when President Bush signed a new executive order last month reauthorizing the CIA interrogation program: The White House emphasized that all interrogations would be overseen by medical officials, as a way of ensuring the safety of prisoners. Since doctors and psychiatrists have ruled themselves out as professional groups, that leaves the psychologists to do the work. And some of them worry that the APA's latest position will still allow the abuse of detainees psychologically, so long as the pain doesn't last too long.