Karl Rove calls himself Moby Dick. One speechwriter sees himself as St. Francis. Another sees him as Iago. All regard Bush as Abraham Lincoln. In Washington, reality is a myth. 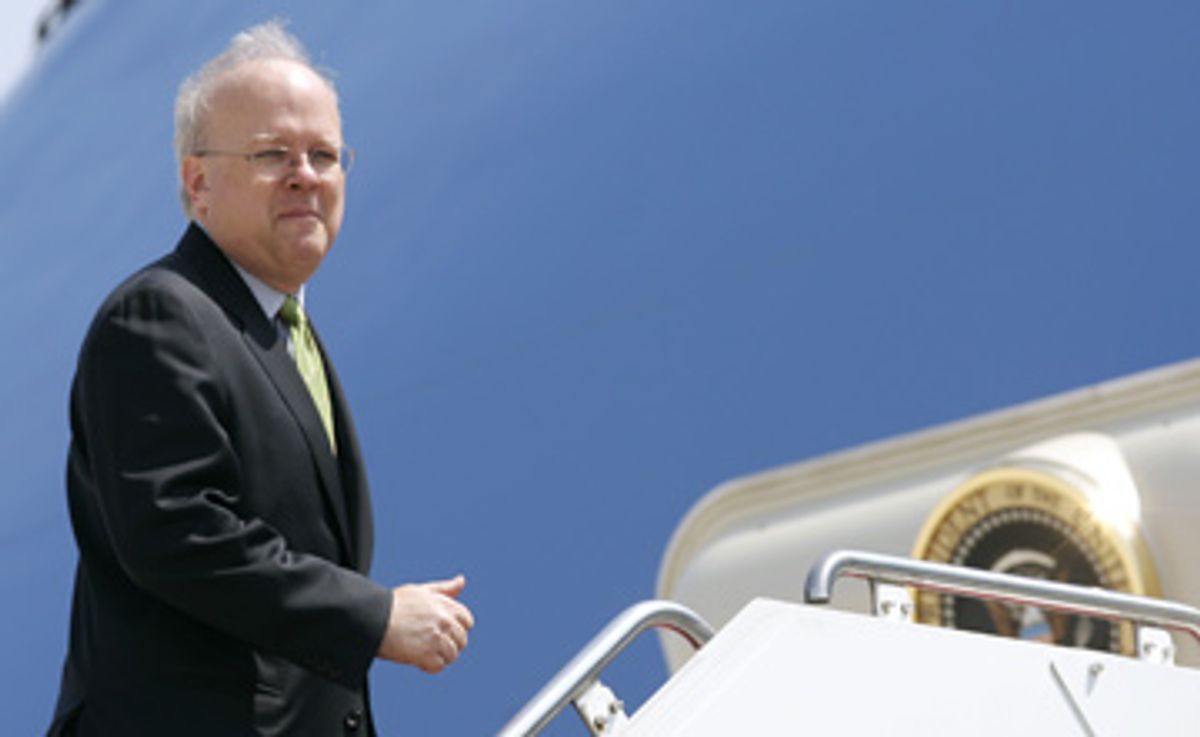 Even before the date of his resignation from the White House took effect, Karl Rove furiously launched himself on his legacy tour. Appearing on three Sunday morning TV shows over the past weekend he was intent on demonstrating the range of his political, military and literary mastery. Rove rattled off statistics of minority group voting patterns for President Bush in the 2004 election as if the moment were the apotheosis of the Republican Party. He cited Napoleon in order to justify the Iraq war -- "Look, Napoleon said that your battle plan doesn't survive the first contact with the enemy, but you still have to have a plan" -- but not Napoleon's remark after the retreat from Moscow: "There is only one step from the sublime to the ridiculous." And Rove thrashed around in search of an appropriate character from fiction to describe his ineffable and immortal being. "I'm Moby Dick," he began, but, dissatisfied with identifying himself as the great white whale, drew upon his wellspring of literature for yet other self-projections. "Let's face it. I mean, I'm a myth, and they're -- you know, I'm Beowulf. You know, I'm Grendel. I don't know who I am. But they're after me." Hunted and hunter, beast and warrior, author of his own tale nonetheless suffering an identity crisis, a figure transcendent beyond history still pursued down dark alleys, Rove finally rested on a note of paranoia. If the demons were after him, what would he not do to punish them?

When questioned about his indisputable part in the outing of covert CIA operative Valerie Plame Wilson, Rove did what came easiest to him, distorting reality, mangling facts and baldfaced lying -- "dissembling, to put it charitably," as Matthew Cooper, the former Time magazine reporter, said on NBC's "Meet the Press" after observing Rove's interview there. Rove's performance included not only petulantly refusing to apologize to Plame ("No!"); repeating various canards about former ambassador Joseph Wilson; claiming that he had not told MSBNC "Hardball" host Chris Matthews, as Matthews had reported, that "Wilson's wife is fair game"; but also mimicking word for word the perjured testimony of Vice President Cheney's former chief of staff, I. Lewis "Scooter" Libby, who had falsely insisted that he had not planted stories about Plame with reporters but after learning of her identity from them had replied, "I've heard that, too." "I remember saying, 'I've heard that, too,'" said Rove brightly. "To imply that he didn't know about [Plame's identity], or that he heard it in some rumor out in the hallways, is nonsense," commented Cooper.

Rove, however, was not alone in burnishing his standing as statesman. Michael Gerson, former chief Bush speechwriter, specialist in faith-based rhetoric, now a columnist for the Washington Post and Newsweek, joined his latest campaign. "I found Rove to be the most unusual political operative I have ever known; so exceptional he doesn't belong in the category," wrote Gerson on Aug. 17 in the Post. "His most passionate, obsessive love -- after his wife -- is American history." Thus fervor equals omniscience equals omnipotence. Rove the secret Heathcliffe is also the second coming of Abraham Lincoln. Gerson's proof is located not only in Rove's ability to quote Lincoln on political technique and his unique collection of artifacts -- "carefully archived pictures of President William McKinley's funeral, original ballots from the 1860 election" -- but in Rove's "ideas." Neither the realities of Bush's policies nor Bush's current abysmal poll ratings, Gerson argues, reflect on them. "The complications of Iraq have obscured Rove's victories, not undone them," he writes. Contrary to Matthew 7:20, "Wherefore by their fruits ye shall know them," belief and acts do not meet in Gerson's doctrine. Through faith alone the spirit -- and the Bush administration's reputation -- shall be reborn.

As Gerson preached to pagan Washington on behalf of Rove's virtue, he found himself defending his own. Like Rove, he stood accused of grandiosity, dishonesty and hypocrisy. But while gladiatorial combat in the arena is routine for Rove, for the evangelical Gerson, cast as a saint by a press corps guided by its penchant for stereotype -- "deeply religious," according to the Washington Post; the "president's spiritual scribe," in Time's version -- the assault came as a surprise.

Michael Gerson was credited with writing Bush's most memorable lines, his momentous speeches and inaugural addresses, infusing them not only with religious uplift but also with ideological intensity. The character of Gerson has served as earthly evidence of Bush's spiritual calling. In numerous journalistic accounts, Gerson was depicted as selfless and pure of heart. But the article about him appearing in the September issue of the Atlantic, written by Matthew Scully, a speechwriter who served with him, portrays Gerson less as St. Francis than Tartuffe, less Joan of Arc than Sammy Glick. "For all of our chief speechwriter's finer qualities, the firm adherence to factual narrative is not a strong point," writes Scully. "The artful shaping of narrative and editing out of inconvenient detail was never confined to the speechwriting. (The phrase pulling a Gerson, as I recently heard it used around the West Wing, does not refer to graceful writing.)"

Scully describes how Gerson carefully crafted his own image as Bush's voice and conscience, conveniently airbrushing the other speechwriters out of the picture. Scully recalls being at a crowded meeting on Sept. 13, 2001, with Bush, at which the president declared, "We're at war." In the version appearing in the Washington Post, under the byline of Bob Woodward and two other reporters, "the rest of us have vanished, and the president declares, 'Mike, we're at war.'"

The White House ticktock story (or detailed, minute-by-minute account), a favorite of the prestige newspapers, showing their superior access, is always fraught with manipulation. And the versions that appear are invariably a tale agreed upon by those selected or volunteering to tell the tale. Gerson was a master of the genre and the whole Washington press corps was his keyboard, but especially Bob Woodward.

"Woodward's trilogy about the Bush years is a tale of speechwriting glory that Mike himself could hardly improve upon," writes Scully. "Remember those powerful and moving addresses the president gave after September 11? According to Woodward's State of Denial, Mike wrote all of those speeches by himself ... How do I break the news to Bob Woodward that his high-placed source wrote not a single one of the lines quoted above, at best a third of any of the speeches he mentions, and that the National Cathedral address was half-written before Mike even entered the room?"

Michael Gerson emerged as a perfect hothouse flower of the religious right and conservative infrastructure. After graduating from Westminster Christian Academy, he majored in theology at the evangelical Wheaton College, and was immediately recruited as a ghostwriter for Charles Colson, the Watergate dirty trickster and felon who had become a religious-right leader of the Prison Fellowship Ministries. Gerson has called Colson his mentor, an example of "tremendous personal integrity." Gerson was soon appointed a "senior policy advisor" at the Heritage Foundation, though expert in no particular policy, and served as a speechwriter for a succession of Republicans, from Sen. Dan Coats of Indiana to Sen. Bob Dole. After Gerson's brief stint at U.S. News, Karl Rove signed him up for the presidential campaign of George W. Bush. From there, the rest is mythology.

"The narrative that Mike Gerson presented to the world is a story of extravagant falsehood," writes Scully. "He has been held up for us in six years' worth of coddling profiles as the great, inspiring, and idealistic exception of the Bush White House. In reality, Mike's conduct is just the most familiar and depressing of Washington stories -- a history of self-seeking and media manipulation that is only more distasteful for being cast in such lofty terms. There are rewards for such behavior, and in Mike's case the Washington establishment has raised him up as one of its own -- a status complete with a columnist's perch at The Washington Post."

Scully's memoir is unusual in the annals of Washington tell-alls. Typically, the disillusioned narrator wishes to distance himself from failure, assign blame to others or expiate his guilt. Scully, however, desperately wants to claim his proper share of credit for the Bush catastrophe. While he accuses the devout Gerson of bad faith, he never quite recognizes why Gerson's credit hogging has seemed so plausible. Whether or not Gerson wrote what he claimed to have written, the orotund, purple prose that is his style is completely consistent with Bush's high-flown rhetoric. Phrases like "axis of evil" mark Bush's language as a torrent of incoherence, arrogance and fanaticism. But the stupidity of the ideas is no hindrance to the fight over pride of authorship. Taking credit for the disaster is better than anonymity, a Washington version of the Hollywood P.R. truism that there's no such thing as bad publicity.

The conflict between Matthew Scully and Michael Gerson is a clash between two cardinal sins: The bearer of envy meets the bearer of false witness. Scully is transparently envious of the rewards bestowed on Gerson by the Washington Post Corp. -- both Post and Newsweek columns -- suggesting a payoff to a source, an unreliable one at that. He neglects the complicating possibility of an ecumenical blessing bestowed on a suddenly socially acceptable right-wing evangelical -- Colson ghostwriter ascendant as Post columnist -- another bizarre twist in the twilight of the Bush period in Washington.

But Scully's sua culpa is the Boys' Life version of the Bush presidency. He can't get over his infatuation with Bush. The worst charge he levels against Gerson is that his self-promotion "diminishes" Bush's "achievement." In contrast, Scully presents himself as a paragon of good faith, the real true believer. "Six years later, with all that has gone wrong in Iraq, I know one is now supposed to sigh with regret at how mistaken we all were about Bush in those days, how foolish of us to think the man had greatness in him ... And yet I think I recognize greatness when it steps before me, and the sight of George W. Bush in those days left an impression that has never worn off."

Still mesmerized by his heroic conception of Bush, Scully does not see in Michael Gerson a representative figure of Bush's presidency. In his inability to connect his words (whichever they were) to Bush's deeds, moreover, Scully is little different from Gerson or Rove -- or Bush -- promoting a legacy that ignores the realities of their history and instead takes a leap of faith into myth.