Bush blames "unfair treatment" while Gonzales tries to take the high road. But invoking his late father was a new low for the scandal-dogged, self-pitying attorney general. 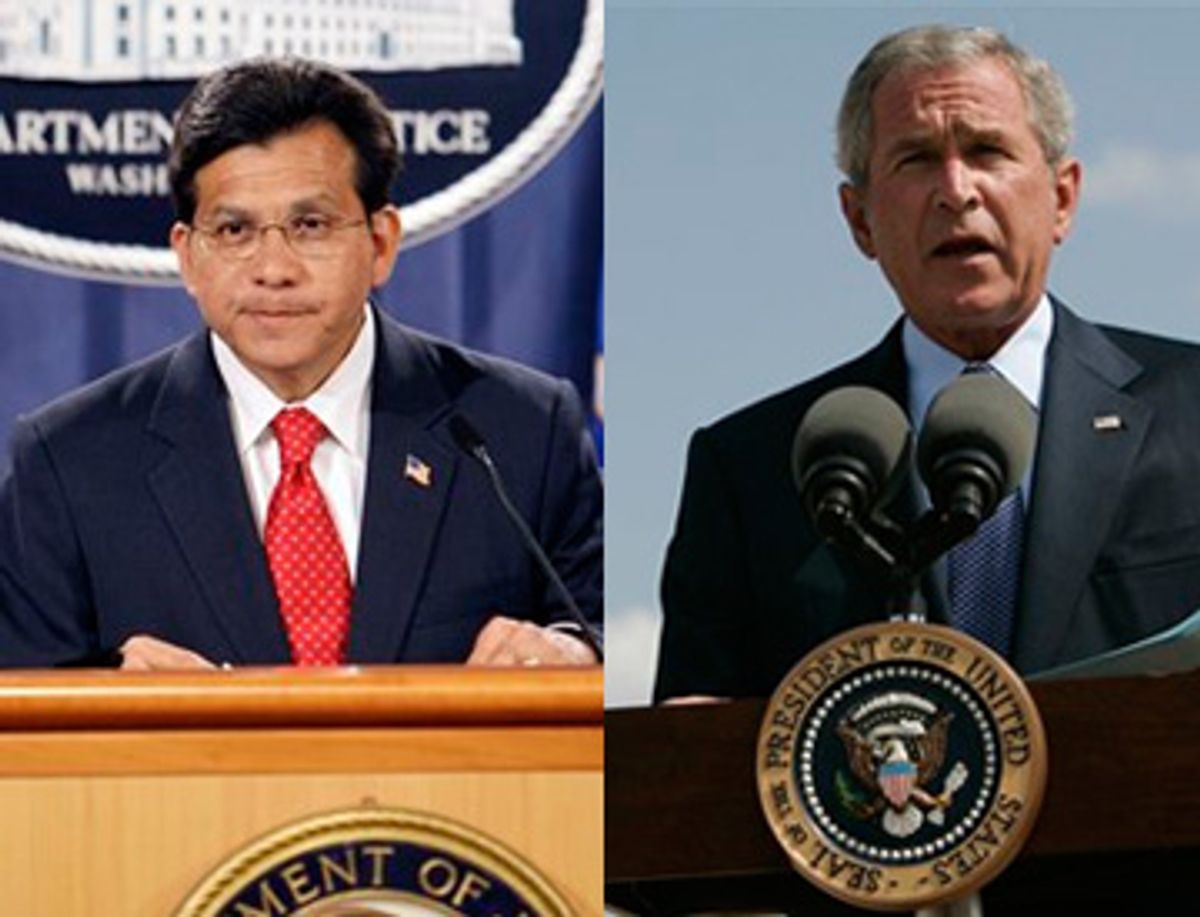 The tragedy of Alberto Gonzales came to an almost farcical end Monday with his self-pitying speech announcing his resignation. It's terrible that the country's top Latino leader is going down amid scandal and a hot debate about the nature of his wrongdoing -- is he a serial lawbreaker or just an incompetent Bush crony? But it's appalling the way Gonzales and his supporters have made him a symbol of the American dream, and implied that it's his Democratic critics who've turned the dream into a nightmare. "It's sad we live in a time when a talented, honorable person like Alberto Gonzales is impeding [sic] from doing important work because his name has been dragged through the mud for political reasons," President Bush said Monday, after describing Gonzales' climb from humble origins.

Gonzales' rise -- from the son of an alcoholic millworker in, yes, Humble, Texas, to the top of the American justice system -- is a fascinating psychological study, especially when you remember that Bush, his patron, also had a drinking problem, and that one of Gonzales' early key accomplishments for Bush was hiding a 1976 drunken-driving arrest. But Gonzales may have reached a new low when he invoked his father in his resignation speech. "Even my worst days as attorney general have been better than my father's best days," he said Monday morning.

I can't judge whether that's true, but I'm not sure Gonzales can either. Gonzales could go down in history as the worst attorney general ever, accused of ginning up legal rationales for torture, spying on U.S. citizens and trying to turn the Department of Justice into an arm of the Republican National Committee. The man biographer Bill Minutaglio credits with having a "mortician's calm" attempted to embalm the department he was supposed to lead. Sen. Patrick Leahy wants to charge him with perjury for his many likely lies to Congress. (Paul Kiel has six of the best lies here.)

I know his father had a difficult life and that, according to Minutaglio, young Alberto was ashamed of him, but the comparison seems self-serving and unfair to me. According to the values of Gonzales' elite patrons, a scandal-ravaged day serving Bush as attorney general might well rank higher than the best day of an alcoholic manual laborer, but it's a shame to see Gonzales say the same thing -- and deeply revealing of Gonzales' scars. Maybe it's time that he go home and deal with them.

Glenn Greenwald has said everything there is to say about the need for Democrats to block the next Bush appointee unless he or she is a person of uncommon character and experience. In War Room Tim Grieve shows how everything about Gonzales' tenure as attorney general was foreshadowed in his Senate confirmation hearings, and yet six Democrats voted for him -- Joe Lieberman, Mary Landrieu, Bill Nelson, Ben Nelson, Mark Pryor and Ken Salazar. And even Joe Biden, in asking Gonzales for more candor, felt compelled to say, "I love you, buddy." Let's hope the Democrats don't buddy up to the president's buddies yet again.