Why did Gonzales resign?

Without Karl Rove around to give him his orders, and with the investigations closing in, "Fredo" had nowhere to turn. 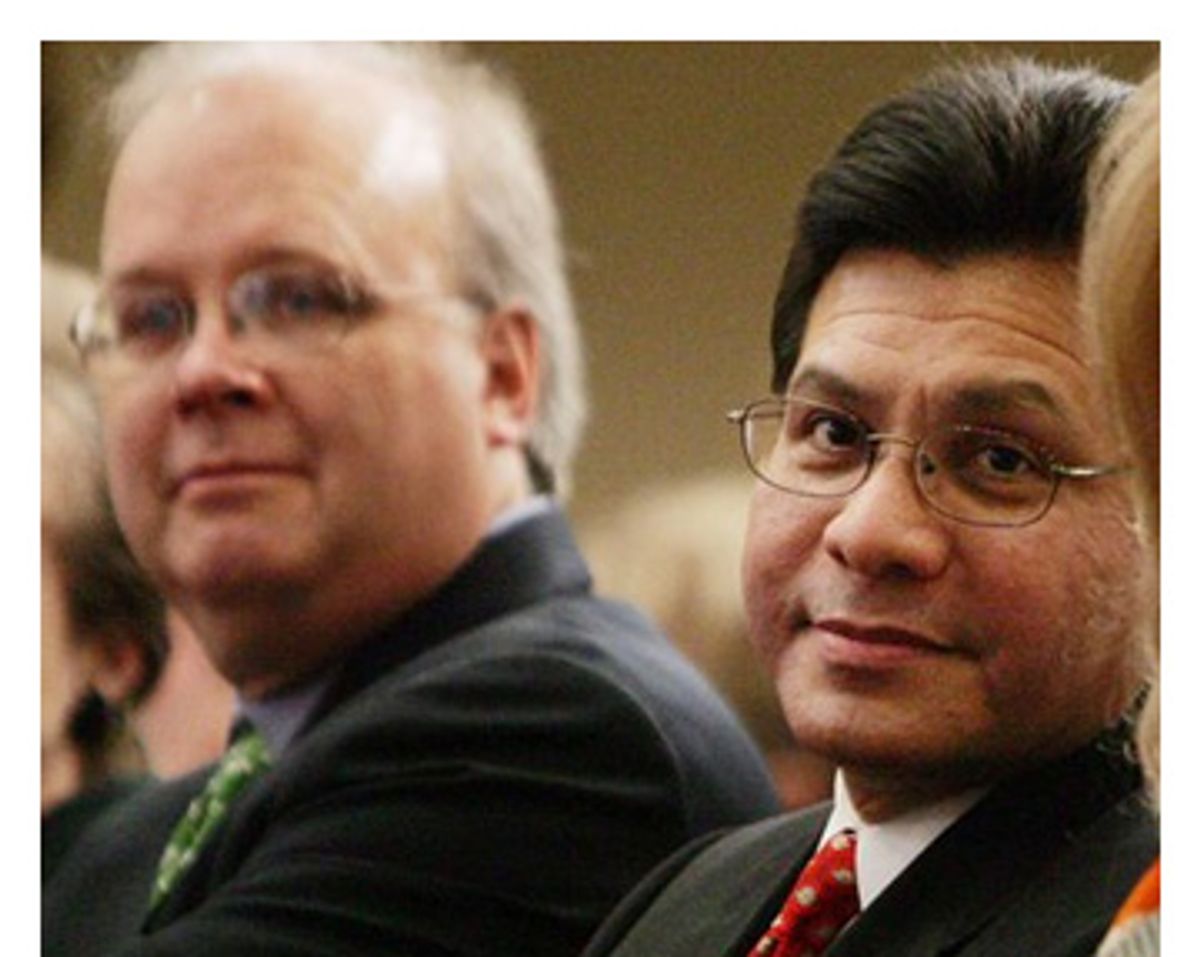 The true story may be something like the denouement of Edgar Allan Poe's "The Purloined Letter," which was in plain sight all along, a solution that can, as Poe wrote, "escape observation by dint of being excessively obvious; and here the physical oversight is precisely analogous with the moral inapprehension by which the intellect suffers to pass unnoticed those considerations which are too obtrusively and too palpably self-evident." To be excessively obvious, Gonzales' resignation, following Karl Rove's exactly by two weeks, is the shadow of the first act.

Under investigation by the House and Senate Judiciary committees for his part in the political purge of U.S. attorneys and warrantless domestic surveillance, Gonzales wandered through his appearances down winding paths of dissembling. On the U.S. attorneys, his former deputies -- his former chief of staff, Kyle Sampson, and former deputy attorney general, Paul McNulty -- contradicted him. On domestic spying, the former acting attorney general, James Comey, described then White House counsel Gonzales' attempted coup on behalf of a program Comey considered illegal through Gonzales' securing the signature of the ailing Attorney General John Ashcroft, barely able to lift his head in his hospital bed after surgery. After Gonzales offered a different account, FBI Director Robert Mueller appeared before the Senate on July 27 to corroborate Comey's version, staking his position against Gonzales' credibility. Senators called for the appointment of a special prosecutor.

In the weeks leading up to his resignation, Gonzales was undoubtedly aware of the various investigations into his activities, the avenues being pursued and the witnesses questioned, not all of them in public. As a practiced attorney, he knew that once he left government service he would become less interesting to investigators and that whatever revelations were unearthed would have less political impact. The logic of his resignation became indisputable from his own narrow interest and the larger interest of the administration. But the resignation of Rove severed his lifeline to his political control agent. Without Rove, Gonzales was adrift.

From the beginning of his rise with George W. Bush until the day of his abrupt resignation, Alberto Gonzales was anointed, directed and protected by Karl Rove. At the Department of Justice, Gonzales served as Rove's figurehead. In the real line of authority, the attorney general, a constitutional officer, reported to the White House political aide. Bush did not nickname Gonzales "Fredo," after the weak brother in "The Godfather," without reason.

As White House counsel and attorney general, Gonzales operated as the rubber stamp of the two great goals of the Bush presidency -- the concentration of unaccountable power in the executive and the subordination of executive departments and agencies to partisan political imperatives. Vice President Cheney directed the project for the imperial presidency, while Rove took charge of the top-down politicization of the federal government. Gonzales dutifully signed memos abrogating the Geneva Conventions against torture, calling them "quaint," and approved the dismissal of U.S. attorneys for insufficient partisan zeal.

Rove ran the Department of Justice like a personal fiefdom as Gonzales reigned there as his vassal lord. The civil rights division was gutted, more than 60 percent of its professional staff forced out; and since 2001, not a single discrimination case was filed. The antitrust division became a favor bank. Rove granted dispensations to companies, including those seeking to override laws involving foreign purchases of U.S. assets with national security implications, a former government official involved in such a case told me.

Typical of the political interference was the 2005 federal racketeering case against big tobacco companies in which government witnesses were suddenly withdrawn, suggested penalties lessened and lawyers ordered to read a weak closing statement prepared for them. Sharon Y. Eubanks, the 22-year veteran federal prosecutor in the case, revealed to the Washington Post in March 2007 that the chain of command ran directly through the attorney general's office. "The political people were pushing the buttons and ordering us to say what we said," Eubanks said. "And because of that, we failed to zealously represent the interests of the American public ... Political interference is happening at Justice across the department. When decisions are made now in the Bush attorney general's office, politics is the primary consideration ... The rule of law goes out the window."

Rove's interest in tobacco cases was hardly new. From 1991 through 1996, while guiding the ascent of Bush to the Texas governorship and during his early years in that office, Rove worked as a $3,000-a-month consultant to Philip Morris. In 1996, when Texas Attorney General Dan Morales filed a suit against tobacco companies seeking compensation for state Medicaid funds spent on workers who fell ill because of smoking, Rove conducted a dirty trick against him -- a push poll spreading smears about him.

Rove vetted and approved every important appointment made by Gov. Bush. Like Bush, Rove saw the political possibilities in having a prominent Hispanic as part of the entourage. The son of immigrants, from the town of Humble, Texas, no less, was perfect casting.

From 1982 to 1994, Gonzales worked as a partner at the Houston-based Vinson and Elkins law firm, which handled the legal affairs of Enron and Halliburton. Enron was the single biggest financial supporter of Bush's political career in Texas; and Cheney, of course, was the CEO of Halliburton, for which Gonzales performed legal services.

In 1994, for Bush's run for governor, Rove got tobacco firms, Enron and Halliburton, among other interests, to siphon funds into various front groups on the issue of "tort reform." Through these funding sources, Rove also managed a flow of donations to candidates for the Texas Supreme Court, whom he handled as a consultant. (Rove was among the biggest owners of Enron stock among White House staffers, holding between $100,000 and $250,000. His influence with Enron extended to arranging a lucrative Enron consulting contract for Republican operative Ralph Reed, an old associate from College Republicans days, while Reed simultaneously worked on Bush's 2000 campaign.)

Upon Bush's election, Gonzales was named his legal counsel. In 1996, he successfully argued that Bush should not serve on a Travis County jury because of a potential conflict of interest given his powers of pardon and clemency. The real reason was that Bush did not want to disclose his past drunken-driving arrest, which would have threatened his political viability as he began planning his presidential campaign.

Having proved his loyalty, Gonzales was made Texas secretary of state and then appointed to the Texas Supreme Court. Rove guided him every step of the way. In 2000, Gonzales had to win election to his appointed judgeship. Even as he was running Bush's presidential effort, Rove handled Gonzales' campaign, just as he managed the campaigns of all Republican candidates for the state high court. Once again, Rove drew upon his deep sources of campaign funding. Enron and its law firm, Vinson and Elkins, were the principal financiers of Gonzales' race, kicking in $35,450.

Once elected president, Bush immediately named Gonzales his White House counsel. To the extent that Gonzales was pliable he was useful. But his "remarkable journey," as he called it today in his resignation statement, was remarkable only for his unwavering subservience.

From the start, Rove and Gonzales were secret sharers. But one was "the Architect" and the other was "Fredo." With Rove's resignation, Gonzales lost the political and policy hand that had guided him all along. When the puppet master departed, the puppet collapsed in a heap.