Global warming has blessed cool-weather wine regions with record vintages. But while savoring their gold-medal wines, viticulturists are looking to the future -- and it isn't pretty. 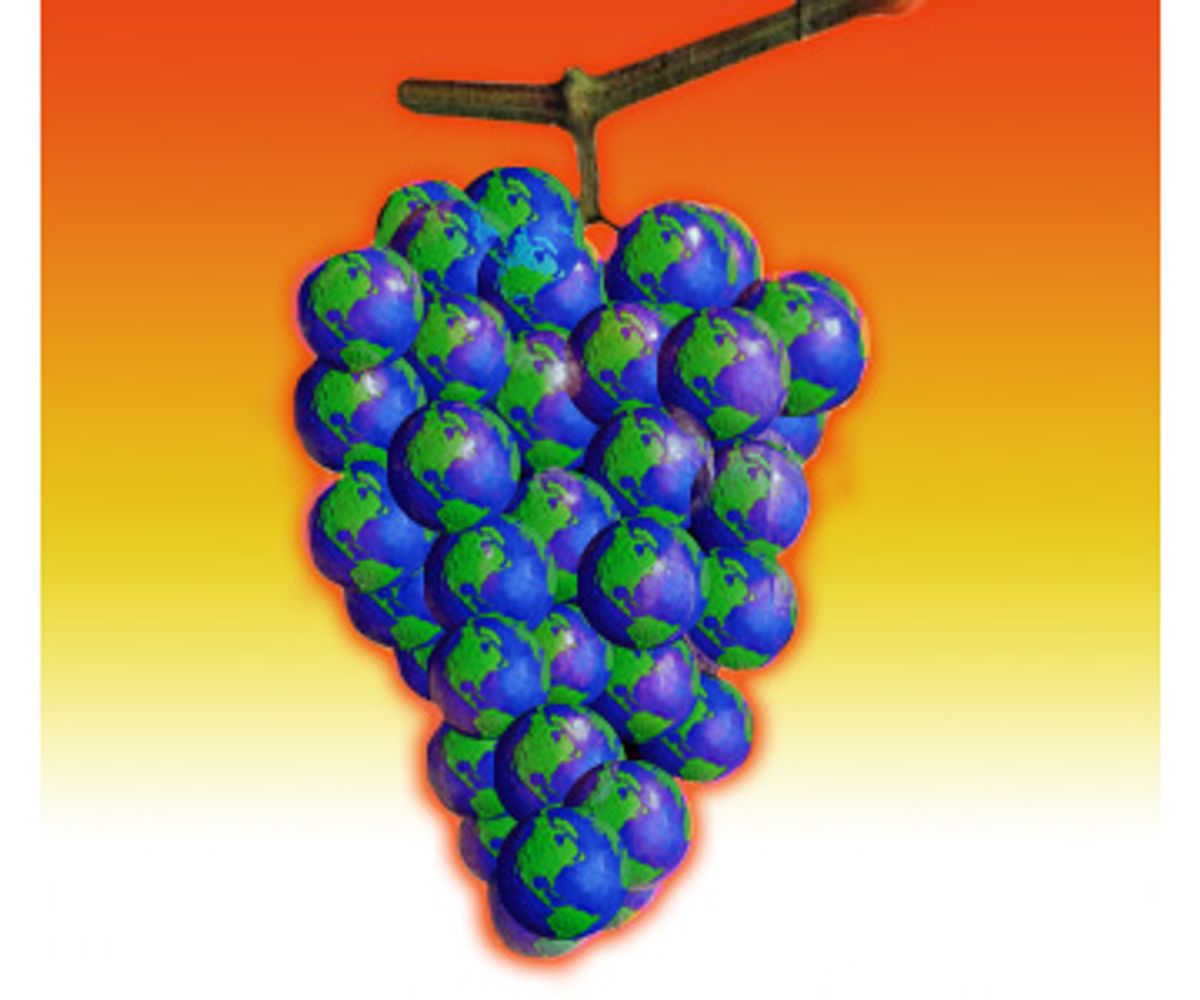 Harry Peterson-Nedry, owner and winemaker at Chehalem Winery in Oregon's northern Willamette Valley, has been having a string of spectacular years. His grapes are ripening like never before: They're juicy and rich with just the right proportion of acid. And since the late 1990s, growing has only gotten easier. With the exception of 2005 -- the coolest year of the past decade -- his crops have avoided frost damage. Winemaking used to be a fickle, backbreaking business; but lately, he's hardly had to work at it at all!

Summers full of sunshiny days and warm temperatures have meant a longer growing season and more opportunities for diversification; whereas the valley used to be appropriate only for cool-weather grapes like pinot noir and Riesling, now Peterson-Nedry is suddenly able to harvest richer, sweeter varietals, such as Syrah, Tempranillo and Grenache. The blending possibilities are endless. And Chehalem's wines improve with every new release, earning higher Wine Spectator points with every passing year. Business is booming.

But Peterson-Nedry is not pleased.

"Sure, this is a great thing for us in the short term," he says. "We've had 10 years of above-average vintages thanks to global warming. And a lot of winemakers in this region are just sitting back, fat, dumb and happy. But we're all fools if we think we can stop this freight train. Sooner or later, it's going to run us over."

The effects of weather on winemaking go way back.

Vineyards throughout the British Isles and northern Europe were wiped out during the so-called Little Ice Age -- a cyclic period of cooling that began in the 13th century but was most evident during the years from 1650 to 1850 -- and never really recovered, that is, until now. We've traveled nearly full circle: returning to the winemaking climates of the Crusaders' era. But, this time, scientists say it's unlikely another ice age will come to reset the sequence.

Today, however, the problem isn't a natural expanding and contracting of the world's glacial sheets. Rather, it's consistent, excessive heat, likely due to global warming: Temperatures in the world's most famous modern winemaking regions (namely California and southern France) have, on average, risen 2 degrees Celsius over the past 50 years.

Receding glaciers, rising sea levels, deadly heat waves, disease, drought, famine and floods: The potential devastations of manmade climate change are manifold. But one of the things that makes it possible for the world to remain complacent -- burning through record amounts of ($3 per gallon) gasoline and sipping Evian from disposable plastic bottles -- is that the effects tend to be gradual, long-range, difficult to categorize and prove. By the time they're here, it will be too late to do anything.

Not so in the winemaking business.

Viticulture may be the canary in the coal mine of our planet's agricultural system. Grapevines are extremely fickle, and successful vineyards require a very delicate calibration of temperature, growing season, rain and light. Different varietals need different amounts, of course: Zinfandel grapes thrive on heat and direct sun, whereas the notoriously temperamental pinot noir starts to lose its delicate flavor and aroma when exposed to temperatures above 35 degrees Celsius for even a short period of time. By watching the way global warming is affecting vintners, scientists are able to track a so-called environmental envelope for wine -- one that is migrating from the approximate center of the earth (California, southern France, Italy, Australia, Chile and Spain) toward the polar extremes.

"There's a combination of temperature, moisture, slope, latitude and soil quality that goes into the total envelope for wine," says Noah Diffenbaugh, a climate scientist and professor of earth and atmospheric science at Purdue University. "Temperature is only part of the equation, but we do know that one result of excess greenhouse gas concentrations is the frequency of severely hot days. And these will have a very negative effect on most grapevines."

The situation in the Southern Hemisphere is pretty dire: Movement of the wine envelope from Australia and South America toward the pole means the appropriate climate for viticulture will soon be located mostly over water. But in the case of the Northern Hemisphere, where there's more land mass, there's been a definite "upward" trend from the fine wine regions of the past -- namely California and the Mediterranean basin -- toward Oregon, Washington, upstate New York and Ontario, northern France, and Germany.

"In the short term, speaking about global warming from a purely objective point of view, there will be losers, but there will also be winners," says Greg Jones, a professor in the environmental studies department at Southern Oregon University and one of the nation's leading experts in climactic issues affecting wine. "Right now, the warmer winemaking regions nearer the equator are becoming challenged. But if you're on the polar side in either the Northern or Southern Hemisphere, you're a winner. For instance, the wine industries in Britain, Denmark and Tasmania are all growing. And in a lot of cases -- such as the Pacific Northwest and northern Europe -- we're just seeing better ripening climates overall."

In fact, specific winemaking regions have been benefiting from the effects of global warming for several decades.

Studies conducted by Jones and Diffenbaugh (along with several colleagues) have shown that minimum nighttime temperatures in California's Napa Valley region have risen 3 degrees Celsius since 1930, while -- until recently -- daytime maximum temperatures stayed relatively stable. This resulted in half a century of bountiful harvests for the residents of Napa and Sonoma, with a reduction in frost damage, a longer average growing season, and riper, juicier fruit. It's only in recent years that the climate in Northern California has become hostile to viticulture: too hot for too long, with too little rain.

Meantime, in Burgundy, the ancestral home of chardonnay and pinot noir, winemakers who had for centuries been "chaptalizing" their wines -- adding sugar during the fermentation process in order to increase the alcohol content -- because the damp, cool air made it difficult to achieve uniformly sweet, ripe grapes, suddenly found they no longer had to. These days, says Jones, chaptalized wine in Burgundy has become the exception rather than the rule. And this is good for vintners and drinkers alike.

"If you can ripen the fruit to the point where you have natural sugars helping in the fermentation process," Jones explains, "the wine is simply much better. Thanks to climate change, the winemakers of Burgundy have had a great last 20 years."

But the party may soon be over. One leading indicator: the growing number of "hot" wines coming out of California and traditional winemaking regions of France, with alcohol contents in the 14 to 16 percent range. And with temperatures predicted to rise another 2 degrees Celsius by the year 2049, the next logical step in this process may be vintages that tilt wildly out of balance.

The development of high-quality wine grapes depends upon four things: acid retention, sugar ripeness, phenolic ripeness, and flavor. Historically, winemaking areas were chosen because their climate provided the right combination of heat, cold, sunlight, rain and soil to reach the right levels of each of the four elements at roughly the same time. That's when they would harvest.

But with higher temperatures and less consistent rainfall (flooding cycles alternating with drought, rather than more or less steady moisture), the balance is being thrown off. Sugar levels increase quickly with heat, while acid is lost through respiration. This puts growers in a bind. If they wait for the flavor profile of their grapes to develop fully, the resulting wine often tastes "cooked" -- thick, jammy and overwhelmingly boozy -- rather than balanced and bright. But if they pick the grapes early, they run the risk of making wines with a raw, vegetal note that most people will dislike.

The solution, says Jones, may be to plant crops with climactic elasticity, such as Syrah, Viognier, Dolcetto and cabernet. But ultimately, the fields will also have to move: to higher elevations, closer to the oceans, north and south into sectors not yet warmed to a dangerous point.

"If we consider the way our world is changing and look ahead, the Puget Sound area will only get better for wine," Jones says. "But in California, they're going to have difficulty finding varietals that will grow in a hotter and hotter climate."

Diffenbaugh, more a scientist than an oenophile, is far more blunt: "In terms of the current trajectory, greenhouse gases are growing exponentially and the frequency of hot days will severely limit viable wine regions. I'd say we can expect an 81 percent reduction in produceable land over the next 40 or 50 years."

This is exactly what keeps Harry Peterson-Nedry up at night.

The salad days have arrived for winemakers in Oregon, but unlike their brethren in Sonoma and Napa -- who didn't know any better -- these guys have a blueprint for the way the next few decades of cultivation will go. They know they're living on a bubble that's due to burst. The signs are already there.

"When I started growing grapes in 1980, 600 feet was the maximum elevation for a vineyard and you were told you should always plant on south-facing hills," say Peterson-Nedry. "Now we're raising the elevations and it's more like 1,000 feet up before you get too cool. And I'm starting to plant on north-facing hills because it's the only way to keep the pinot noir grapes from getting heat-damaged and losing their acidity."

Don't think all the gloomy forecasts are keeping Peterson-Nedry from taking advantage of the freakishly perfect winemaking conditions. Chehalem, which means "peaceful valley," will produce about 18,000 cases of wine this year -- evenly split between white (Riesling, pinot gris and chardonnay) and red (almost all pinot noir).

But he refuses to grow complacent or forget that his good fortune is an omen. That's why he and many of his colleagues in the Oregon hills have joined to make their wine industry the first "carbon neutral" one in the country.

"The entire world has to work on this problem," says Peterson-Nedry. "But we decided to start at home. I don't want to sound pessimistic, but this train has a huge head of steam and there's no way we're going to stop it entirely. But we must put our efforts into trying to stabilize the climate. If we don't, I think it's possible that in 20 years all our cool-weather varietals could just be gone."