Alberto Gonzales' successor will face a heckuva job rectifying the damage the attorney general did to American justice. 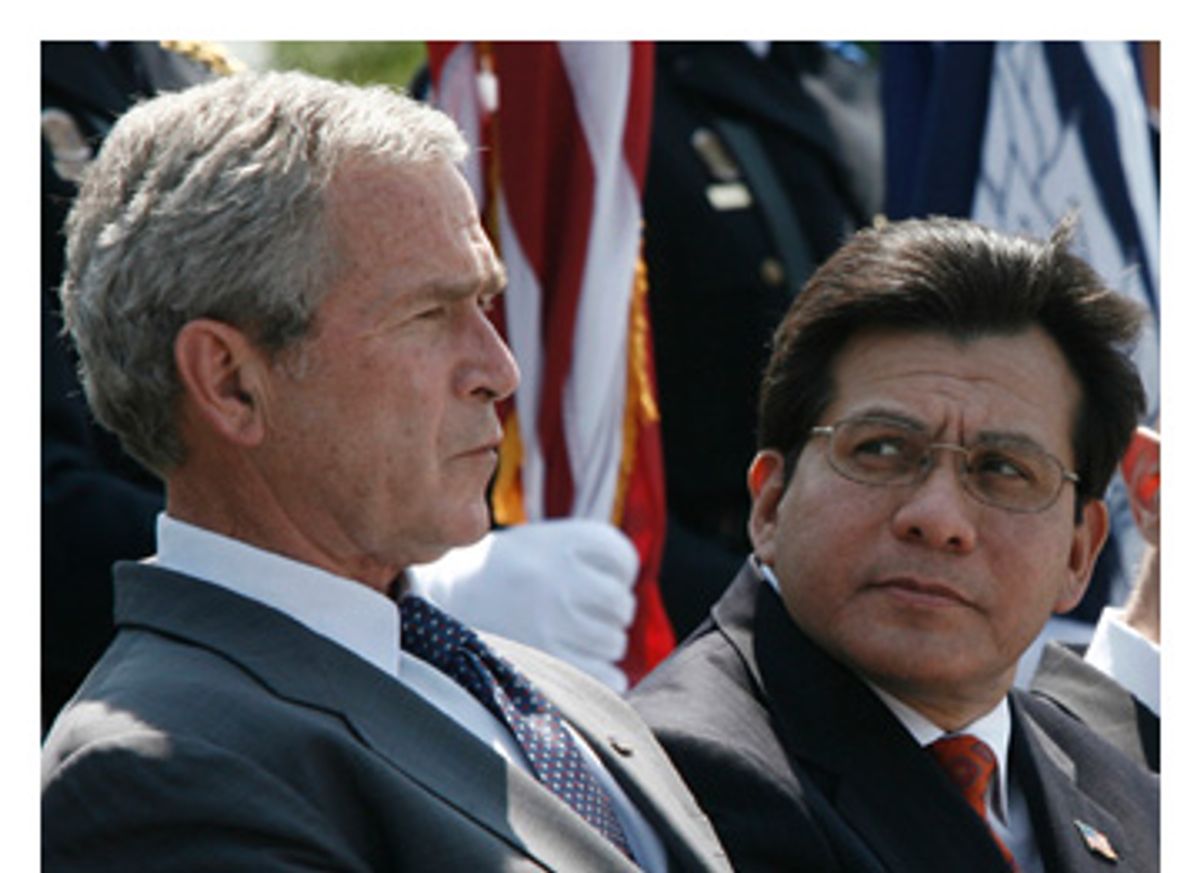 What will President Bush do without Alberto Gonzales around to tell the president he can do whatever he wants? Maybe he'll finally get some good legal advice. For someone who held the top two legal jobs in the country (and possibly the world) for almost seven years -- first as White House counsel and then as attorney general -- Gonzales' track record as a legal advisor is stunningly poor. Despite taking an oath to uphold the Constitution and laws of the United States, Gonzales seemed to see his job instead as pleasing his boss. That may be a good strategy for bureaucratic success, but shouldn't we demand more from the nation's top law enforcement officer? Gonzales' yes-man strategy has left the reputation of the Justice Department -- and the United States -- in tatters. If we are to have any chance of restoring the credibility of the Justice Department and our standing as a nation committed to the rule of law, Gonzales' replacement needs to have the independence and integrity that Gonzales sorely lacked.

Consider the profound consequences of just some of Gonzales' most important (and worst) advice. When Bush was considering whether to extend Geneva Convention protection to detainees at Guantánamo, Gonzales dismissed the Conventions as "obsolete" and "quaint," and said they need not apply. The Supreme Court disagreed, ruling in 2006 that the Geneva Conventions apply to all detainees, but not before Guantánamo had become a world-renowned symbol of U.S. arrogance, lawlessness and cruelty.

Gonzales' secretive maneuverings to allow the brutal treatment of prisoners only exacerbated the damage. When the CIA expressed concern that its employees might be held liable under a criminal law barring torture because of its practice of waterboarding -- interrogating immobilized suspects by pouring water over their faces until they believe they are drowning -- Gonzales commissioned a memorandum from Justice Department lawyers Jay Bybee and John Yoo assuring the CIA interrogators that torture was restricted to the level of physical pain associated with "organ failure and death" -- leaving interrogators free to simulate drowning to their hearts' content. When that closely held opinion was eventually leaked to the press, the administration was forced to retract the memorandum and replace it with a new one on the eve of Gonzales' confirmation hearings for the office of attorney general. But the damage was done: Coercive interrogation techniques had trickled down the chain of command and resulted in the Abu Ghraib scandal, another boon to al-Qaida recruitment and a direct hit on the United States' image worldwide.

When someone pointed out that the international treaty on torture, signed and ratified by the United States, also forbade all "cruel, inhuman, and degrading treatment," Gonzales advised that this language simply did not cover foreigners held by the United States abroad. On this highly implausible ground, he argued that the international human rights treaty protected only U.S. citizens held abroad from abusive treatment. When Sen. John McCain learned of that interpretation, he persuaded huge majorities in both houses of Congress to reject it, over the strenuous objections of Gonzales and the White House. But long before the mistake was rectified, the world learned that the United States had adopted an official policy of subjecting other nations' citizens to cruel treatment that it could never use with respect to its own citizens.

When the president wanted to wiretap telephone calls of Americans without a warrant, in direct violation of a criminal statute requiring court orders for all such surveillance, Gonzales opined that the president could ignore the law because, as commander in chief, he could not be bound by the other branches in how he "engages the enemy." A federal court declared that reading unconstitutional. While the case was on appeal the administration retreated, announcing that it had submitted the program to judicial supervision under the Foreign Intelligence Surveillance Act, the very law Gonzales had argued the president could violate with impunity.

In each instance, if you cut through the legalese, Gonzales' advice to Bush was "Do what you want." In each instance, the advice was terribly misguided, and the administration was forced to retreat -- but not before the United States developed an international reputation as a country that views the rule of law as a luxury to be discarded at its convenience, especially when it comes to the rights of foreign nationals.

Despite these huge and historic missteps, what ultimately brought Gonzales down was the politicized firing of several U.S. attorneys midway through Bush's second term, and in particular Gonzales' failure to be candid during a subsequent congressional investigation. This was hardly Gonzales' biggest sin, but it was the only one where the administration could not play the "war on terror" card. In reality, Gonzales should have been forced to resign years ago. It's not just that his counsel was so poor; his biggest flaw was precisely what made him so congenial to President Bush -- his inability to say no.

Gonzales was not the prime mover behind the torture, disappearance, enemy combatant and warrantless wiretapping policies of the Bush administration -- by most accounts, Vice President Dick Cheney takes those honors. But he was a key player. In each instance, instead of invoking the law to curtail the proposed abuses, Gonzales facilitated them by reading the law to OK whatever the vice president and president wanted.

The rule of law is not self-executing. It requires individuals to enforce it, even when it goes against their (or their bosses') wishes. That's why we require federal officials to swear an oath to uphold the Constitution and the laws of the United States. Ultimately, the rule of law, which is always counterposed to the rule of men, requires men and women to stand up for the law against those who would abuse the power with which they are entrusted.

In March 2007, in the midst of the scandal about the firing of the U.S. attorneys, former Deputy Attorney General James Comey -- someone who knows about standing up for the law -- sent one of the terminated attorneys an e-mail message that concluded, "What's that quotation about all that's necessary for evil to triumph is for good men to remain silent." Gonzales not only remained silent, but affirmatively aided in the triumph of evil.

Rumor has it that Secretary of Homeland Security Michael Chertoff may be nominated to succeed Gonzales. Despite questions about his role in the poor federal response to Hurricane Katrina, Chertoff is highly qualified for the job. He's bright, engaging and thoughtful, and he has served as a prosecutor, judge and head of homeland security. He would likely be neither the facilitator that Gonzales was nor the fundamentalist that John Ashcroft was. Were this the beginning rather than the end of Bush's second term, Chertoff would be an excellent choice.

But given the pall that has been cast over the Justice Department and the country with respect to our relationship to the rule of law, it is essential that the next attorney general be someone who comes to the job with a much greater degree of independence from the administration. And if the Democrats are to use their majority for anything, they should use it to demand an attorney general with the integrity and independence to begin the hard job of restoring what Gonzales helped to tear asunder.