Two years after Katrina, even the most unassuming residents have grown cynical about the media spotlight. So why do we keep telling our stories? 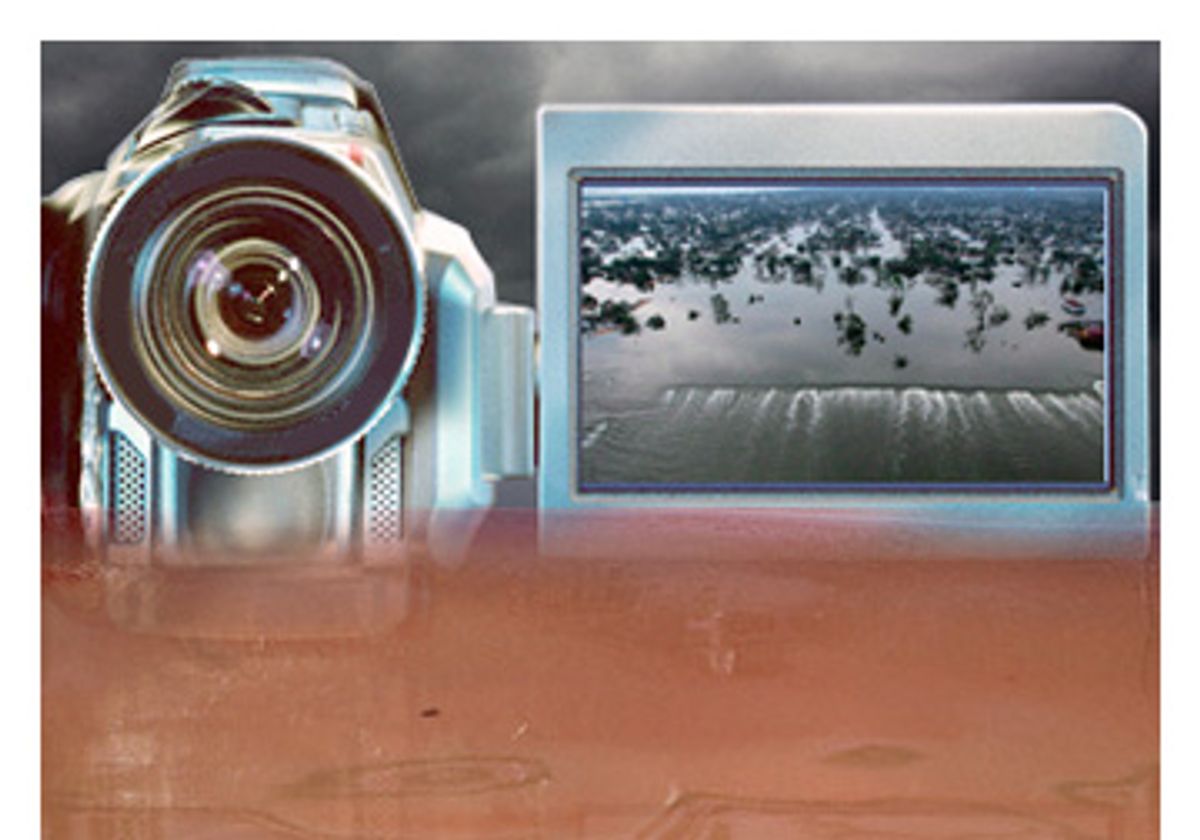 Driving through the Bywater section of New Orleans a few days ago, a friend waved me down. "How do you know that it is the second anniversary of Katrina?" she asked, and I waited for the punch line. "All of your friends just completed their third television interview of the day."

The funniest thing about the joke was that it wasn't much of a stretch from the truth. The media has become a fixture in the post-Katrina landscape of our city, just like vacant neighborhoods and the search-and-rescue graffiti tags beneath the new paint on every door. And after two years of living as if we were contestants on a long-running reality show, even the most unpretentious New Orleanians have grown media savvy.

Those of us who were near a television two years ago as the city flooded, then drained and flooded again, witnessed two horrors: the destruction of our city and the misguided reinterpretation of our home by reporters tasked with deciphering the remains of a civilization that had, at least for the moment, disappeared. Like novice archaeologists, they mispronounced streets and invented neighborhoods with names that had never existed before the storm. The city's population was divided into a few easily identifiable types: the wealthy protecting their wine cellars, the eccentrics drinking at bars, the poor who couldn't escape.

Shortly after returning to New Orleans in October 2005, I agreed to meet with a journalist who was a friend of a friend. She had been in town a few days when we sat in a cafe with a map and she attempted to make sense of east and west, north and south, levee locations and storm surges. Finally, I agreed to drive her around. "Was this a white neighborhood or a black neighborhood?" she asked at each corner we crossed. Or, "Was this rich or poor?" After the storm, it was all a mess, but she seemed confused when I insisted that even before the flood the distinctions weren't so clear. I drove her through my own "Upper Ninth" neighborhood; then, in the Lower Ninth, where the destruction was notoriously bad, she asked, "How far is your house from the breach?" "About a mile," I said. "I don't think so," she insisted, and I wondered what it was she had trouble believing.

"Oprah's people just called," a friend tells me. She waits a beat, then this: "They're looking for a typical housewife." She's already been interviewed by the Wall Street Journal, Forbes, Anderson Cooper, and just about every other media outlet around.

"What did you tell them?"

"That they had the wrong number."

This is what it has come to for many of us: Instead of jumping at the opportunity to speak, we're perfectly willing to take a pass. A day later, it's Oprah's people again, at my local cafe, looking for positive stories about New Orleans. The cafe owner, anticipating their arrival, has prepared a list of everyone who is likely to be in the vicinity, annotated with all of their good deeds. She's ready to pitch our community like a highly paid publicist.

Meanwhile, a producer from one of the networks is on the phone with me, looking for a "typical family" who is mourning the loss of a loved one due to violent crime. I begin spouting off candidates. There is no shortage. The producer interrupts me: "We don't want it to be a teenager, or gang related, or have anything to do with drugs." This, of course, eliminates the majority of the homicides in town. Instead, I offer cases that are in the court system and the complications they have met reaching trial. "Well, we aren't really interested in that," the producer says. "What we're looking for is a case that hasn't gone to trial because of police incompetence." The list of stipulations whittles the pool down to a handful of victims, exclusively white. When I mention this, the producer gets defensive. I suggest a handful of other tragic cases, but their trails aren't as cold as she'd like. I feel like a salesman in a boutique, working with a customer who wants to try everything on.

"This is a great opportunity for you tell your story," they tell us. The term "great opportunity" is their currency, particularly when trying to persuade someone to speak of the dead. An acquaintance recently had the "great opportunity" to speak to the media about the homicide of her husband. "But aren't you angry with the police?" they asked, unaware that she came from a family that had worked in law enforcement for generations.

Several weeks ago I was lured to a French Quarter hotel to participate in an episode of the BBC's "World Have Your Say." It was, as they say, a "great opportunity." I'd never listened to the show, but it struck me as awfully similar to "Vox Populi" from the brilliant satirical film "Network." The BBC brought 40 community leaders into the room, and a moderator asked the world, "Should anyone care what happens to New Orleans?" Phone calls and e-mails poured in from Afghanistan, India and all over, and most people seemed to think the answer was no.

Meanwhile, a team of producers ran through the room asking the assembled crowd to explain why people should care. When a caller from Portland suggested that nothing should be rebuilt in a setting as geographically dangerous as New Orleans, I waved my hand in the air, eager to bring up earthquakes and volcanoes, which the Portlander apparently doesn't regard as a threat.

But they didn't bring the mic to me. Instead I watched each person who was called to speak slip in a careful reference to a pet project: levee reform, The Road Home, the defense of William Jefferson. The woman next to me leaned over and said, "You just keep getting redder and redder." I bit my tongue, afraid of what kind of nonsense might spew out.

Of course, New Orleans is a city of storytellers, a place where the line between public and private has always been a bit blurry, even before the exteriors of our houses literally came crashing down. Still, it is easy to see where this constant public performance may get in the way of our ability to heal. A few months ago, when I turned my phone off for an afternoon, a television crew spent several hours shuttling between my two known hangouts -- Coffea and Sound Café -- desperate for the sound bite necessary for a piece on crime. Finally I relented, on the condition that they allow me to multitask by interviewing me in the midst of a late afternoon walk with one of my dogs. They got their quote and as a bonus, some B-roll footage of the pit bull at my side.

But the truth is, I could have stayed home. I could have not answered the phone. I could refuse to allow visiting photographers their photo of my "Make Levees Not War" T-shirt. I could live my life in the disaster zone without considering how to package my concerns into easily digested concepts, particularly when the situation we find ourselves in is far more complex than anyone outside the zone could possibly understand.

So, why do we keep talking to the cameras -- and why do the cameras keep coming back? Because in the absence of leadership, the citizens have become the sole voice of record. We are the Whos in Who-ville, chanting "We Are Here! We Are Here! We Are Here!" as the dusk speck we are living on is lowered over the boiling vat. We hold tight and continue chanting, hoping that eventually someone gets the story right.