The war against Iraq's prime minister

Sens. Hillary Clinton and Carl Levin are calling for Nouri al-Maliki's ouster as a way of attacking Bush's Iraq policy. But do they understand the consequences? 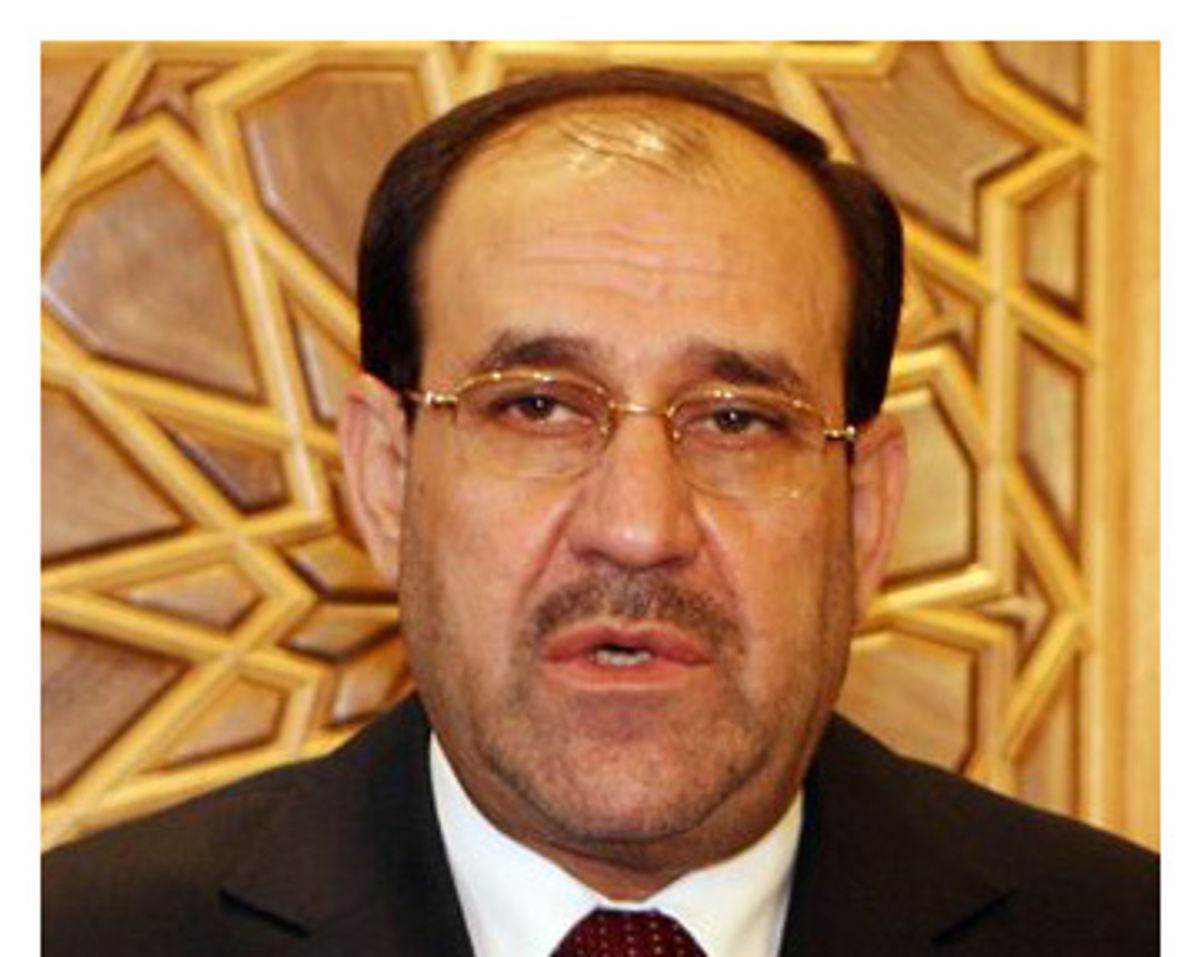 On Tuesday, President Bush went overboard in his defense of embattled Iraqi Prime Minister Nouri al-Maliki, calling him America's bulwark against both al-Qaida and Iran.

In his remarks to the American Legion in Reno, Nev., Bush said that the Iraqi government was America's shield in the region against both of these forces of "Islamic extremism," and said of Maliki, "The prime minister of Iraq, Prime Minister Maliki, has courageously committed to pursue the forces of evil and destruction."

Bush was defending Maliki, even at the cost of implausibly depicting the leader of the fundamentalist Shiite Islamic Call (al-Da'wa) Party as an opponent of Iran and Hezbollah, because the prime minister has been under virtual siege from Washington politicians for the past week and a half. He's become the favorite whipping boy of opponents of continued U.S. military presence in Iraq.

Maliki has been unafraid to mount his own defense against his American critics. On Sunday, he slammed Sens. Carl Levin and Hillary Clinton for calling for the Iraqi parliament to oust him. He accused the senators of acting as if Iraq were "the feudal estate of this person or that," a metaphor that went over the head of most American observers. Modern Iraqi political parties such as the Islamic Call were formed in part as a reaction against the landlord class that dominated Iraq under the British-installed monarchy. Maliki was saying the senators were bringing back colonialism and disregarding the Iraqi political process. "They are Democrats," he quipped of Clinton and Levin, "so they should respect democracy and its results."

But, of course, it's not just Democrats who have turned on Maliki. Sen. John Warner, R-Va., told "Meet the Press" Sunday that the "partnership we formed with the Maliki government" had "failed." Because his own party's base won't allow him to blame Bush, Warner had to make clear that all fault lay with the Iraqis. "We did our job," he added, "but al-Maliki has let down the American forces, the coalition forces, indeed, the president, in not carrying through with his part of the bargain."

The American search for a scapegoat in Iraq is a bipartisan effort, in other words, and Maliki seems to fit the bill, especially since his political support is collapsing at home. He was dealt a new blow Tuesday when clashes between Shiite militiamen, security forces and pilgrims left 26 dead in the sacred city of Karbala, forcing the evacuation of 1 million pilgrims and the cancellation of one of Shia Islam's holiest festivals. If a Shiite prime minister can't keep order in a Shiite city, what chance does he stand against his critics at home and abroad?

But the American politicians who are trying to hasten his demise often get their facts wrong, and may be undermining him for the wrong reasons. They could be preparing the way for a successor even less likely to cooperate with the Sunnis. They do not, in short, seem to understand how their "feudal estate" works.

Levin started the latest round of Maliki bashing a week ago Monday, saying, "I hope the parliament will vote the Maliki government out of office and will have the wisdom to replace it with a less sectarian and more unifying prime minister and government." Clinton piled on two days later, saying that the Maliki government "cannot produce a political settlement, because it is too beholden to religious and sectarian leaders." She added, "I share Senator Levin's hope that the Iraqi parliament will replace Prime Minister al-Maliki with a less divisive and more unifying figure when it returns in a few weeks."

By the time Clinton spoke, President Bush had worsened the situation with some injudicious, impromptu remarks, admitting, "I think there's a certain level of frustration with the leadership in general, inability to ... come together to get, for example, an oil revenue law passed or provincial elections." Journalists understandably thought he might be giving up on Maliki -- not at all his intended message, according to what I was told by someone with inside knowledge of the administration's Iraq policy. The president was constrained to clarify later that he thought Maliki a "good man" with "a difficult job" and said he supported him. He underscored his support with Tuesday's laudatory speech before the American Legion.

Some of the charges against the prime minister are true. Maliki had neglected to reach out to the Sunni Arabs in his national unity government. But Sunni demands, which included the rehabilitation of Baathists and the release of large numbers of detainees suspected of involvement in guerrilla actions, were often unpalatable to Maliki.

Some of the charges are based on a misreading of Iraq. Sen. Warner, for one, made several misstatements about Maliki during his appearance on "Meet the Press." "You've got to remember," he insisted, "that the Maliki government, Shia interests, are very closely aligned with Iran." He added that the Shiites, having gotten to the "top of the hill," are "[reluctant] to give up a fair share to the Sunnis, to the Kurds ... Unless you have a unity government between those three factions, Iraq will not become a strong sovereign nation."

Warner is wrong to imply that Maliki's Shiite government has bad relations with the Kurds. In fact, the Kurdistan Alliance is what keeps Maliki in power, given that two major Shiite factions have quit his governing coalition. Likewise, Warner doesn't grasp the role of Iran. Maliki is less close to Iran than his predecessor, Ibrahim Jaafari, was. Warner does not understand the Islamic Call Party or its history as an Iraqi nationalist organization with a Shiite emphasis.

And the pressure now coming from Congress to replace Maliki is also unlikely to produce positive change. Although any 55 parliamentarians may introduce a vote of no confidence, at this point it's hard to see how Maliki's Iraqi critics could overcome their own divisions to form the majority vote needed to unseat him. Nor is there an obvious, tested alternative who would have more chance of achieving Bush's benchmarks, which include provincial elections, changes in the harsh de-Baathification laws that have excluded many Sunni Arabs from public life, and a new law specifying equitable distribution of oil income. Former appointed interim Prime Minister Ayad Allawi has hired a fancy Washington public relations firm and is among four politicians aiming to bring down Maliki and take his place. But Allawi, an ex-Baathist, Shiite secularist and old-time CIA asset, only has 25 seats in parliament and does not have the popularity to come to power by democratic means.

If parliament brought down Maliki, it would not choose his successor directly. By the constitution, President Jalal Talabani would have to go to the single largest bloc in parliament (still the Shiite fundamentalist United Iraqi Alliance) and ask it to choose a prime minister. The new choice would come either from Maliki's Islamic Call Party or from the Supreme Islamic Iraqi Council of Shiite cleric Abdul Aziz al-Hakim. SIIC is much closer to the ayatollahs in Tehran than Maliki is, and much less likely to compromise with the Sunni Arabs.

After a new prime minister is selected, it would take at least six months to form a new government, during which time Iraqi politics would be even more gridlocked. The Kurds, whose secessionist tendencies Sunni Arabs vehemently protest, would be crucial to the formation of any new government, and so the Shiite-Kurdish alliance, which tends to sideline the Sunni Arabs, would continue.

Maliki and his allies seem well aware of the domestic political agenda behind American criticism of the Iraqi government. A leader of the Islamic Call Party, Jawad Talib, on Sunday said that there has been a "contest of wills" in the U.S. since the release of the Baker-Hamilton Iraq Study Group's report, which Bush had rejected. As a result, he said, Iraq has now become an arena for the contest between American political forces. He pointed to how fast Bush reaffirmed his support for Maliki after the controversy over his remarks. He said that the Iraq issue is "pivotal" to the U.S. presidential election debate, but that it would not affect Maliki. He added that the deeply divided character of American politics on the Iraq issue contributed to policy failures.

Talib also expressed astonishment that some observers had tried to drag Iran into the debate. He complained that it is the United States that keeps attempting to drag regional countries into a crisis. Prime Minister al-Maliki, he insisted, has popular support and a broad base in parliament. He complained that no American critic of the Iraq situation points to American errors or shortcomings.

But Maliki has taken some steps to address criticism. In an attempt to blunt the U.S. senators' charge that he had done nothing for national reconciliation, Maliki announced Monday morning that the presidential council had reached some agreements with Vice President Tariq al-Hashimi's Iraqi Islamic Party. The agreement specifies that large numbers of Sunni Arab detainees against whom no formal charges are pending shall be released by the government, and that more members of the deposed Baath Party will be allowed to get government jobs and re-enter political society if they face no criminal charges. It also clears the way for provincial elections to be held. The last round of such polls, in January of 2005, was boycotted by the Sunni Arabs, leaving them without representative government at the local and provincial level.

It is not clear to what extent Maliki can convince his fractious parliament to forge ahead on these controversial policies, since he may lack a majority. He was eager to suggest that Hashimi's Sunni Party was on the brink of joining his political coalition, but Hashimi made it clear that participation in the presidential council and approval of its decisions did not imply that his party was ready to rejoin the Maliki government. Hashimi had threatened to resign as vice president, and the Sunni Arab ministers have suspended their membership in the cabinet. The new policy commitments could help entice them back in if implemented, but if they require parliamentary approval, it is not clear that Maliki has the political capital to push them through.

Maliki's American critics may be right that he is not the man for the job of reconciliation. It is more likely that no Iraqi politician could accomplish much in today's Iraq, where the civilian government is largely irrelevant and the Iraqi army is still poorly trained and equipped and suffers from poor morale. Most of this dysfunctionality can be traced to American decisions and policies, which deprived Iraq of a functioning army and a professional bureaucracy. In any case, Maliki's fate depends not on the U.S. but on the Iraqi parliament, and intervening in their relationship is inevitably a form of imperialism. Playing musical chairs with the prime minister, an old colonial habit in the United States with regard to its overseas possessions, will simply undermine what little faith remains in democracy in Iraq.