The former senator and TV D.A. will make his presidential candidacy official next week, but he's already in reruns. 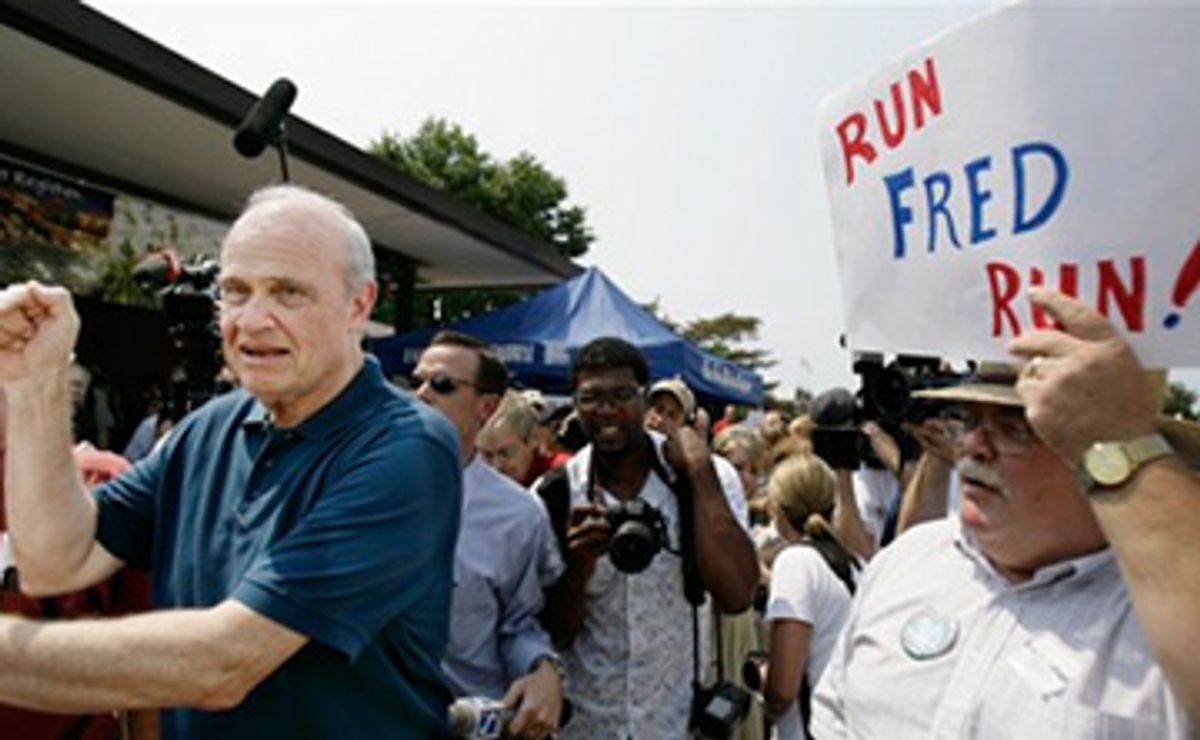 You know the myth of Fred Thompson, the lurking dark horse, the "Law and Order" actor with big hands, big ideas and a bright red pickup truck. Next week you can finally meet the candidate.

The thespian/lobbyist/senator/attorney put out word Thursday that he was going to announce his presidential campaign in one week via a Web video. This was earth-shattering news for the campaign press corps, because it meant the certain end of nearly six months of pre-announcement announcements.

Back in March, friends of Thompson announced that he was considering a run for the White House. A few months later, the Republican non-candidate announced he was officially "testing the water," which meant raising money to pay for further announcements. Then he announced that he found the water "feeling pretty warm," even though he badly underperformed his announced fundraising goals. He made unannounced campaign swings around the country, where he coyly dodged questions about future announcements.

Epistemological dilemmas raced through the pundit class: "When he announced that he would soon announce his announcement, wasn't that actually making the announcement?" the philosophers pondered. "If a tree announces it has fallen six months after it announced it might fall, does the forest even care?" the poets wondered.

For sure, the announcement game was as tedious as yet another Dick Wolf cop show. But the desperation of Republican voters kept everyone paying attention. After a long, hot summer, the Grand Old Party looked like it might sour on the vine without more announcements promising announcements of better times. The top four Democratic candidates raised about 50 percent more money than the top four Republican candidates. John McCain, once the party's heir-apparent, had to trade his private jets and chartered buses for commercial flights and living room mixers. Mitt Romney, the corporate Boy Scout, had to dig deep into his own nine-figure fortune to keep his "Truman Show"-style campaign ads running on the air.

But the public responded anyway. He soared into second place in the national Republican polls. In Iowa and South Carolina, he cracked the top three. With his alter ego, the reasonable District Attorney Arthur Branch, still in heavy rotation on cable television, he inhabited a kind of no man's land, the uncandidate candidate, all potential and no punch. Campaign reporters pooh-poohed his rambling, languid performance on the stump. They pointed out that he shuffled his unannounced campaign staff like playing cards. They wrote stories showing he had once worked for groups that favored abortion, supported campaign finance reform, and opposed amending the Constitution to ban gay marriage. But nothing stuck, because he hadn't yet announced, so he wasn't really real.

Frustrated, the pundits dueled on in the electronic ether. Did he have what it takes? Was this all hype before the fall? What was he thinking wearing Gucci shoes to the Iowa State Fair? This week in Iowa, Mike Huckabee, who is rising in the polls to become the Horatio Alger hero of the Republican field, stated the obvious, with a sort of plucky glee. "I frankly don't get it," he said of Thompson's popularity. "People aren't sure whether they are electing a former senator or Arthur Branch." Even Larry Sabato, Virginia's premier political scientist, wondered whether Thompson was simply riding on a cloud of pre-announcement hype. "He doesn't have the intensity of others," Sabato said. "The fact is he may have done better in the polls because he waited."

But the unannounced Thompson ends next Thursday, when he swivels into our personal computers to make his pitch to the American people. His campaign has planned a three-state barnstorm the following weekend, with visits to Iowa, New Hampshire and South Carolina. The whole road show is timed to fill the news hole between a Republican debate in New Hampshire next Wednesday, and the six-year anniversary of Sept. 11, when America's generals will come before Congress to plead their case on Iraq. It's a window of exactly five days, when the political world will sit captive.

Fred Thompson will finally announce. And then we will know if he actually has anything to say.