Dick Cheney's top aide: "We're one bomb away" from our goal 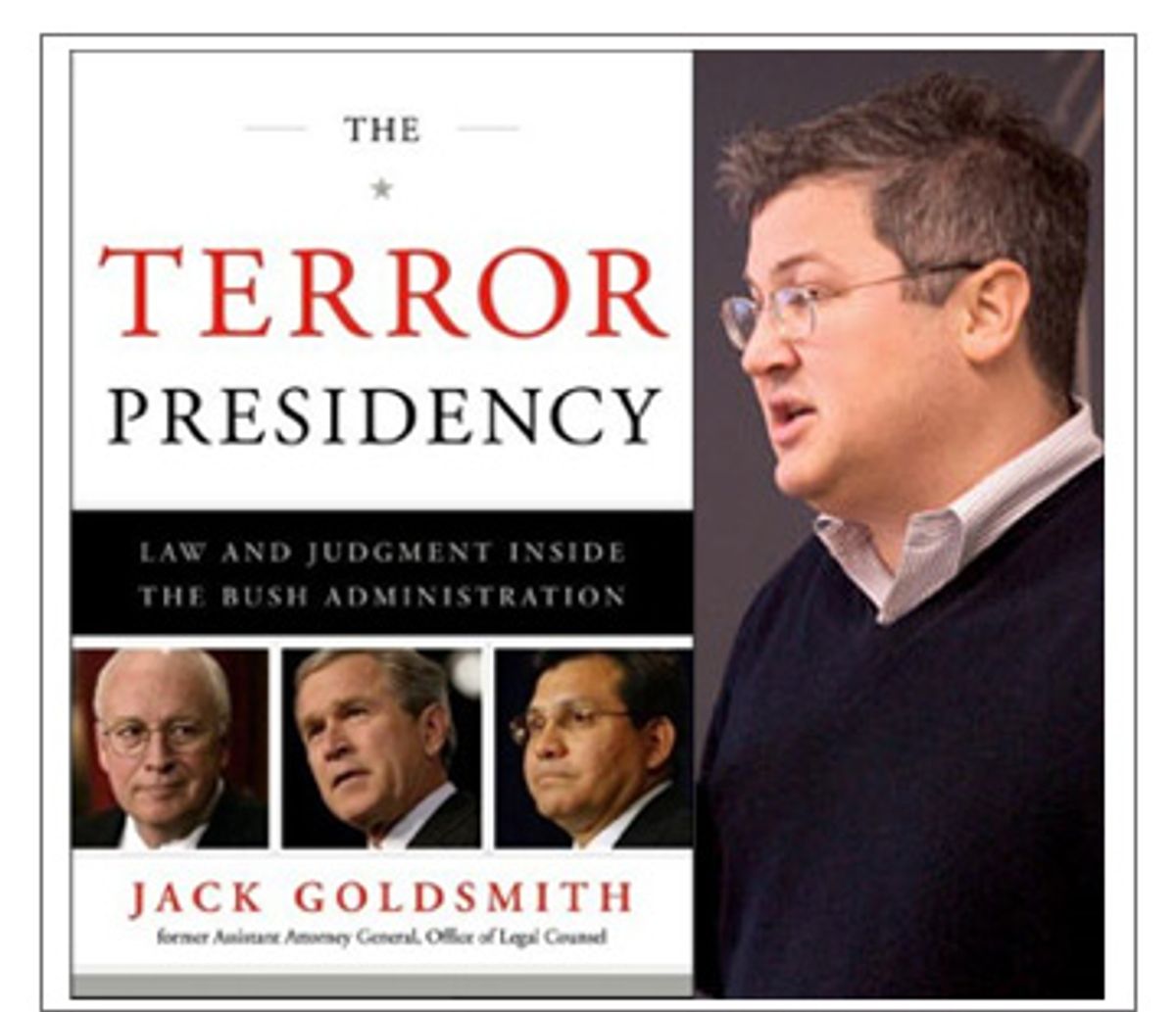 In October of 2003, Jack Goldsmith -- a right-wing lawyer with radical views of executive power and long-time friend of John Yoo -- was named by the Bush administration to head the DOJ's Office of Legal Counsel, one of the most influential legal positions in the executive branch. During his tenure, he discovered numerous legal positions which the administration had adopted (many created by Yoo) that he found baseless and even unconscionable -- from torture to detention powers to illegal surveillance -- and he repudiated many of them, thereby repeatedly infuriating the most powerful White House officials, led by Cheney top aide David Addington. As a result, his tenure was extremely brief, and he was gone a mere 9 months after he began.

Goldsmith, now a Harvard Law Professor, has just written a book, to be released this month, criticizing and, in some cases, exposing for the first time, many of Bush's executive power abuses. He is donating all the proceeds from the book to charity to prevent the standard integrity attacks which Bush followers launch at any ex-officials who commit such blasphemy. In a lengthy profile in The New York Times Magazine, Jeffrey Rosen profiles Goldsmith and highlights some of the book's key revelations.

Two revelations in particular are extraordinary and deserve (but are unlikely to receive) intense media coverage. First, it was Goldsmith who first argued that the administration's secret, warrantless surveillance programs were illegal, and it was that conclusion which sparked the now famous refusal of Ashcroft/Comey in early 2004 to certify the program's legality. Goldsmith argued continuously about his conclusion with Addington, and during the course of those arguments, this is what happened:


[Goldsmith] shared the White House's concern that the Foreign Intelligence Surveillance Act might prevent wiretaps on international calls involving terrorists. But Goldsmith deplored the way the White House tried to fix the problem, which was highly contemptuous of Congress and the courts. "We're one bomb away from getting rid of that obnoxious [FISA] court," Goldsmith recalls Addington telling him in February 2004.

Their goal all along was to "get rid of the obnoxious FISA court" entirely, so that they could freely eavesdrop on whomever they wanted with no warrants or oversight of any kind. And here is Dick Cheney's top aide, drooling with anticipation at the prospect of another terrorist attack so that they could seize this power without challenge. Addington views the Next Terrorist Attack as the golden opportunity to seize yet more power. Sitting around the White House dreaming of all the great new powers they will have once the new terrorist attack occurs -- as Addington was doing -- is nothing short of deranged.

Contrary to the claims made by Bush and his followers ever since the NSA scandal arose, their real objective in secretly creating "The Terrorist Surveillance Program" was never to find a narrow means to circumvent FISA when, in those few cases, it impeded necessary eavesdropping. Rather, the goal was to get rid of FISA altogether and return the country to the days when our government could spy on us in total secrecy, with no oversight. Of course, until they could "get rid of" that law altogether -- through the only tactic they know: exploitation of Terrorism -- they simply decided to violate it at will.

More revealing still is Goldsmith's description of how the Bush administration systematically violated one law after the next -- employing tactics that are truly the hallmark of the most lawless third-world dictators:


In his book, Goldsmith claims that Addington and other top officials treated the Foreign Intelligence Surveillance Act the same way they handled other laws they objected to: "They blew through them in secret based on flimsy legal opinions that they guarded closely so no one could question the legal basis for the operations," he writes.

Goldsmith's first experienced this extraordinary concealment, or "strict compartmentalization," in late 2003 when, he recalls, Addington angrily denied a request by the N.S.A.'s inspector general to see a copy of the Office of Legal Counsel's legal analysis supporting the secret surveillance program. "Before I arrived in O.L.C., not even N.S.A. lawyers were allowed to see the Justice Department's legal analysis of what N.S.A. was doing," Goldsmith writes.

They literally decided they would break whatever laws they wanted -- one law after the next, in critical areas -- based on patently baseless memos issued by obedient followers like John Yoo. Not only did they do this in complete secrecy from Congress, they refused even to allow Executive Branch officials who were told to follow orders to see the legal basis for what they were told to do. Addington, whom Goldsmith described as "someone who spoke for and acted with the full backing of the powerful vice president," would simply demand compliance with what Cheney wanted. And anyone who objected was subjected to this (emphasis in original):


Months later, when Goldsmith tried to question another presidential decision, Addington expressed his views even more pointedly. "If you rule that way," Addington exclaimed in disgust, Goldsmith recalls, "the blood of the hundred thousand people who die in the next attack will be on your hands."

While our national media was glorifying the Great Commander-in-Chief and actively disseminating their most manipulative claims and mocking Democrats on the pettiest of grounds (The Serious National Security Grown-ups are in Charge; John Kerry windsurfs! John Edwards loves his hair!), the Bush administration was dismantling the rule of law, systematically violating long-standing statutes and treaties at will. We were ruled by a truly lawless government, while our media institutions and political elite sat by meek and respectful.

Perhaps most infuriating is the fact that, as it turns out, violating these laws in secret was not even necessary -- because Congress was, and still is, more than happy to legalize whatever they wanted to do. Almost immediately after the Supreme Court finally imposed some mild limitations on the President's detention and interrogation powers -- first in Hamdi, then in Hamdan -- Congress, as Goldsmith says, "promptly passed a law that gave him everything he asked for, authorizing many aspects of the military commissions that the Supreme Court had struck down."

And the terrorist bomb about which David Addington was fantasizing in order to get rid of FISA was equally unnecessary, since the Democratic Congress, in the face of the types of threats Goldsmith recounts Addington routinely made -- "the blood of the hundred thousand people who die in the next attack will be on your hands" -- just eviscerated the crux of FISA's protections by law. Hence, what began as the administration's illegal and secret abuses have become the legally sanctioned policies of the United States.

It is critical to emphasize that Goldsmith -- like James Comey and John Ashcroft -- is no hero. He is a hard-core right-wing ideologue who continues to support many of the administration's most radical positions, including his view that Common Article 3 of the Geneva Conventions does not apply to terrorist suspects (the position rejected by Hamdan). And it was Goldsmith who ultimately approved of the modified (and plainly illegal) NSA warrantless eavesdropping program.

Moreover, Goldsmith explains that he had not even intended to address the NSA surveillance program in his book, but changed his mind once he was served with subpoenas by the FBI in connection with the ongoing criminal investigation to find out who the whistleblower was who alerted the country to this illegality -- an investigation which Goldsmith supports. As Goldsmith says: "I'm not a civil libertarian, and what I did wasn't driven by concerns about civil liberties per se."

Goldsmith is commendable only by comparison to the truly extremist and reprehensible likes of Cheney, Addington, Gonzales and Yoo. He is, by and large, a True Believer in the Bush "War on Terror" and in theories designed to expand substantially executive power. That is what makes his revelations all the more credible, and all the more disturbing. What he is describing is a band of deranged and lawless radicals who, during his tenure, ran our government and who, after they forced him out, continue to do so.

But with little meaningful opposition to any of this -- either in the media or in the Congress -- little attention will be paid to these extraordinary revelations, and our government will continue to be shaped in the image of Dick Cheney and David Addington. Now that they have obtained most of their original wish list from a compliant Congress, just imagine what they are dreaming of, the still new unchecked powers which they believe are only "one bomb away."