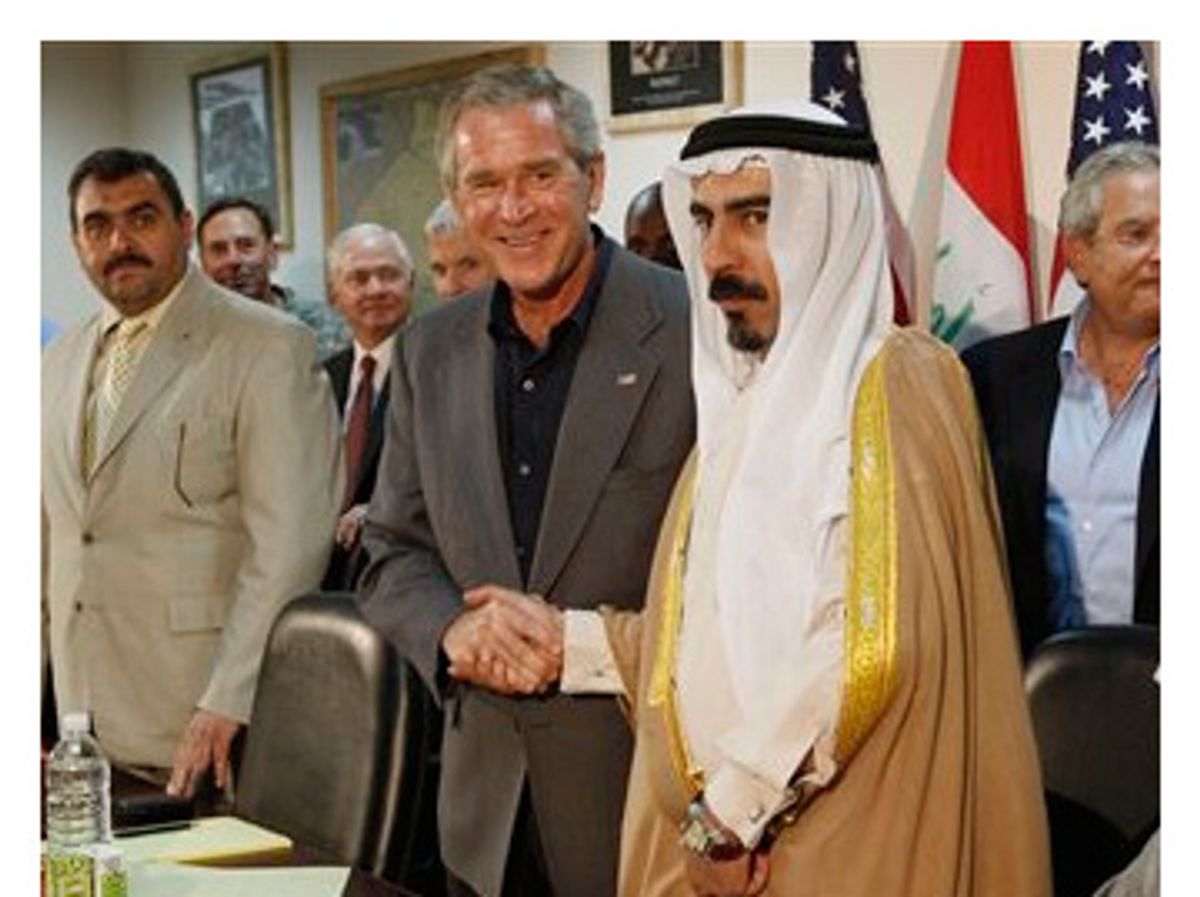 With little progress toward national political reconciliation in Baghdad, and Congress poised to reassess the troop surge, the Bush administration is maneuvering to spin its Iraq strategy in a different direction. Essentially, the argument now goes that instead of sectarian reconciliation from the capital, all politics is local. A series of handshake truces between the U.S. military and Sunni tribes -- including some who not long ago fought as insurgents -- is at the heart of the approach to bringing greater stability to Iraq.

"At some point, there was a switch in the terms of reference for how we evaluate this surge," says Brian Katulis at the Center for American Progress, a left-leaning think tank. "It was that we were going to get the politics running at the national level. Now the key is local progress. It is not national progress."

The handshake truces between U.S. commanders and former Sunni insurgent groups started in Iraq's western Anbar province in late 2005, and similar initiatives are now spreading east toward Baghdad. Former insurgents agree to halt attacks on U.S. troops and instead, with U.S. backing, fight against forces associated with al-Qaida in Iraq. In return, U.S. forces are also helping Sunnis establish their own local security forces and sign up in predominantly Sunni units of the Iraqi army and police.

This new concept, known as "bottom-up reconciliation," has increasingly crept into White House and Pentagon talking points -- reframing a plan that was originally supposed to tamp down sectarian conflict and pave the way for deal making by securing Baghdad and creating a stable national government.

But while security conditions have improved in some areas of Baghdad and elsewhere in the country, some experts say that the shift toward backing Sunni groups isn't likely to help reduce sectarian strife -- and may well be setting the stage for a greater civil war.

Improved security from the troop surge, President Bush argued early this year, would foster an environment in Baghdad where national reconciliation would blossom. Concrete steps such as assembling a more inclusive central government and equitably dividing oil revenues would begin to bridge deep sectarian rifts, progress that would be measurable with so-called benchmarks. "America will hold the Iraqi government to the benchmarks," Bush said when he announced the surge strategy in January.

But the administration has been moving away from the previous measures for progress. "The longer I'm here, the more I'm persuaded that Iraq cannot be analyzed by these kind of discrete benchmarks," Ryan Crocker, the U.S. ambassador in Baghdad, told the New York Times in July. And when President Bush visited Al Asad Air Base in the Sunni-dominated Anbar province on Monday, he emphasized "bottom-up progress," saying that it is "paving the way for the political reconciliation and economic progress the Iraqis need to transform their country."

Military officials in Iraq contend this is, in fact, a form of reconciliation. "We are empowering [Sunnis] and we are looking at this as an opportunity to reconcile," Lt. Col. Christopher Garver, a military spokesman in Iraq, said of the efforts to cut deals with and prop up the Sunnis. "That is one of the things we keep talking about is this national reconciliation, in which getting the people to stop fighting -- even if it is just fighting us -- at least gets people working together," Garver told Salon.

The initiatives have had some tangible benefits for U.S. troops. Maj. Jeff Pool, a Marine public affairs officer in Anbar Province, said there had been 70 attacks on U.S. forces in Anbar the week before last -- down from 450 during a week from the same time period last year.

"Most of these guys had been shooting at us, so you are virtually certain to show a net gain whatever you do," said Frederick Kagan of the American Enterprise Institute, a conservative think tank. Kagan has also been a vocal supporter of the surge strategy.

But others analyzing the war worry that the United States is now training, organizing and empowering staunch foes of the Shiite-led central government. Even Lt. Col. Garver, the military spokesman, admitted that the U.S. initiative with the Sunnis has resulted in "some nervousness" among Shiite leaders in Baghdad.

"If what you are doing is strengthening these particular Sunni groups, and they are cooperating with us to get rid of al-Qaida, you give them guns and training," says Marc Lynch, a professor of political science at George Washington University. "Now they are in a better position to fight against the Shiites."

The U.S. military maintains that it does not provide arms directly to new Sunni units; rather, their arms, the military says, come through the Iraqi government.

Kagan says that stronger, more organized and better trained Sunni factions can free themselves of al-Qaida and bargain with their Shiite counterparts without fear of a slaughter. "To me, the biggest problem all along has been the Sunni community's existential fear of genocide," Kagan explains. "If this helps the Sunni feel comfortable, then it drives the last nail in the coffin of what al-Qaida has to offer," he said. "It also makes political accommodation possible, if the government can be made to feel comfortable with it."

When Bush visited the air base in Anbar province on Monday, he told troops he had met with some of the Sunni tribal sheiks that the U.S. had taken under its wing. "They told me that the kind of bottom-up progress that your efforts are bringing to Anbar is vital to the success and stability of a free Iraq," Bush said.

But Steven Simon, a member of the Council on Foreign Relations, says the sheiks are telling U.S. leaders what they think they want to hear. "They are not going to go to the U.S. commanders and say, 'Let's strike a deal because I want you to strengthen me so that when the time comes, I can go after the Shiites,'" Simon said dryly. "For tactical reasons, you tell your benefactor whatever you need to tell your benefactor."

By strengthening Sunni groups the United States could be helping to set the stage for a full-blown, if more balanced sectarian conflict, rather than a slaughter of the Sunnis by the Shiites if conflict spreads. "We put our thumb very heavily on the Shiite side of the scale" by backing the government of Prime Minister Nouri al-Maliki, Simon said. "One could argue that if there is going to be a civil war, and you want to be sure that genocide doesn't break out, then you strengthen the Sunnis' ability to defend themselves."

As the White House now spins all the deal making with the Sunnis as the path toward reconciliation, the man leading the war in Iraq, Gen. David Petraeus, faces enormous strategic and political stakes. The Democrat-controlled Congress is focusing ever more attention on whether Bush's troop surge in Iraq is succeeding, with a series of hearings leading up to Gen. Petraeus' highly anticipated testimony next Tuesday.

Retired Maj. Gen. John Batiste, who led the Army's 1st Infantry Division in Iraq in 2004 and 2005, observes that the military's current counterinsurgency manual -- famously penned by Petraeus -- calls for a ratio of one soldier for every 40 or 50 inhabitants to bring security. But Baghdad's population alone is 6 million, so the 150,000 troops there, close to the total number now in all of Iraq, may be far fewer than the number needed.

Indeed, the strategy of backing Sunni groups now may be a way to begin to make up the needed difference.

"I think the world of David Petraeus," Batiste said. "He is in a very difficult position. The days are long past for having good choices." He added, "We may be fueling a future civil war."