Lead-tainted toys continue to be recalled. But toy makers and China don't deserve all the blame. U.S. regulators have been napping. 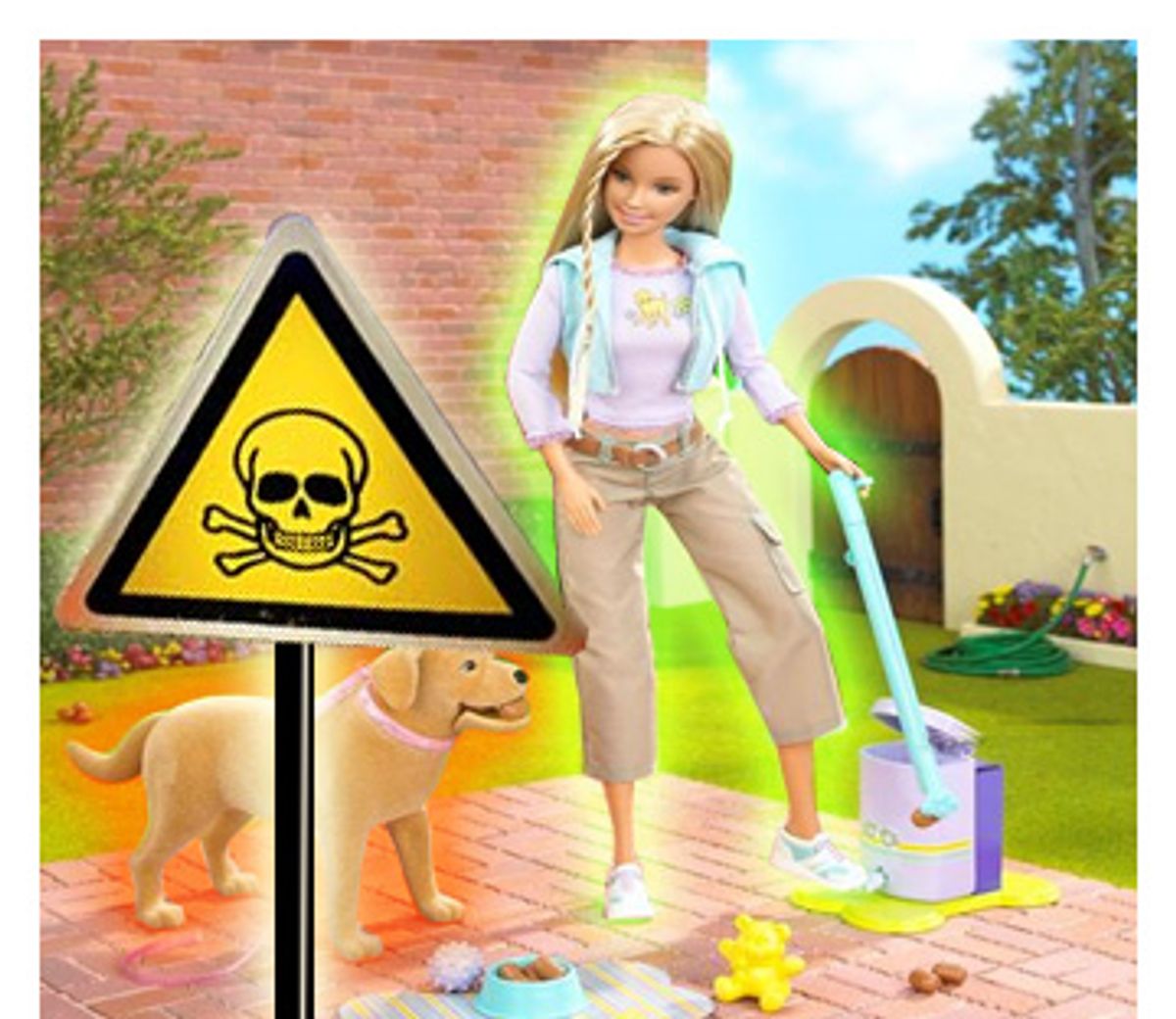 I try to buy a Pollywood limo and a blond Barbie, but the cash register issues a warning for both products in large letters: "Don't sell this item." The checker calls over a supervisor, who explains why the items aren't for sale: "It's either a safety or a quality problem. Sorry!"

There's no need to apologize for not selling me the toys. This summer, Toyland, that ever happy place where fun is always in store, morphed into a seedy underworld, chock-full of looming hazards that could potentially poison, maim or even kill a child. Most recently, on Wednesday, Mattel recalled 700,000 toys, citing lead in locomotives, bongo drums and Barbie's furniture, doghouse and, yes, her kitty condo too.

The great summer toy scare started with Fisher-Price, a division of Mattel, which revealed in August that almost 1 million Elmo, Cookie Monster, Dora the Explorer and Diego toys had been tainted with lead-contaminated paint at a factory in China. Then, a couple of weeks later, Mattel's Batman fessed up to his own magnet problems.

But the bad news in Toyland just kept coming. Et tu, SpongeBob Squarepants? Spinning tops and tin pails featuring Thomas and Friends and Curious George also contained lead. Toys "R" Us even yanked some boxes of crayons for containing lead. Then there was the children's jewelry, recalled from Buy-Rite and Toby N.Y.C., adding to the more than 150 million trinkets recently found to be contaminated with lead.

All of this no-fun news came while Toys "R" Us was summarily yanking vinyl baby bibs from its store shelves after a watchdog group raised concerns about the levels of lead in them. In May, Wal-Mart had done the same. Mattel is now the subject of a class-action lawsuit charging that it should pay for the testing and medical monitoring of children exposed to its lead-tainted toys. And the whole debacle has resulted in at least one death; the head of the Chinese company that Mattel blamed for putting the toxic paint in the toys committed suicide.

Toy makers and China -- where 80 percent of toys sold in the United States are made -- are taking the heat for the recalls. But they don't deserve all of the blame, say consumer advocates. As globalization has scattered manufacturing of U.S. goods around the world, U.S. regulatory measures have not kept up. "We went through globalization, but we didn't prepare the regulatory agencies to do their job, both in terms of the law and their resources," says Tom Neltner, an attorney and chemical engineer who volunteers on the lead issue for the Sierra Club. The toy recall, he says, exposes a U.S. regulatory system in disarray.

Indeed, given all the toy recalls issued by the Consumer Products Safety Commission, parents might mistakenly believe that a SWAT team of inspectors draped in red, white and blue has been cracking down on rogue companies bringing faulty goods into the country to protect children from bad and careless actors throughout the worldwide supply chain. Nothing could be further from the truth.

"Recalls are not the solution to the problem; they are the result of major lapses," says Rachel Weintraub of the Consumer Federation of America. "When a recall happens, it's already too late because harm could already have been done to the children who are playing with the product." Even recalling a product doesn't ensure that it will get out of the hands of children it could hurt. Only about 35 to 40 percent of products recalled are typically returned, according to Newgistics, a company that markets technology aimed at improving recall rates.

In fact, it's the companies themselves that are prompting recalls, not the government agency supposedly regulating them. "People think the government tests every product, but it doesn't test any products unless it has been made aware of a problem," says Ed Mierzwinski, consumer program director for U.S. Public Interest Research Group. "The manufacturer or importer is responsible for making sure that [a product] meets U.S. consumer safety standards. But any testing in advance is done by the manufacturer not the government."

The CPSC has only about 100 inspectors in charge of regulating some 15,000 different products, including escalators, all-terrain vehicles, chain saws and toys. Since July 2006, the commission hasn't even had a chairman. In July 2007, the acting chairman of the commission sent a letter to Congress, begging for help in modernizing the commission. Not only is the CPSC underfunded, it hasn't been reauthorized since 1990, so it has no ability to deal with newfangled notions like products being sold on the Internet, much let the huge shift of the manufacturing of goods overseas.

"The CPSC doesn't really do much of anything," says Charles Margulis, communications director for the Center for Environmental Health, which has exposed lead in children's lunchboxes and baby bibs. "The companies almost always are the ones who find the problem, and they bring the problem to the CPSC, and they say: 'We found this, and we think it might be a problem; if you guys agree, we're going to do a recall.'"

That means toy companies like Mattel are essentially self-regulating. In the August recalls of millions of toys, Mattel notified the Consumer Products Safety Commission about the problem, the agency and the company worked out a voluntary recall plan, and they jointly announced the recall. The CPSC doesn't even have jurisdiction to test products before they come onto the market, which means it's simply up to the companies selling them to make sure that they're safe before they're sold.

"How long have these toys been coming in from China with lead in them? Who knows?" says Mark Schapiro, author of "Exposed: The Toxic Chemistry of Everyday Products and What's at Stake for American Power." "We have no independent way of knowing how long the country has been receiving toys tainted with lead."

The Sierra Club states that the Environmental Protection Agency could get more involved to keep kids safe from lead in imported products, and recently settled a lawsuit with the agency over the issue. "EPA can find out which factories are having these problems," says attorney Neltner. "If a factory in China made one product with lead in it, then they probably made many other products with lead in them, and then sold those to companies who may have no clue that they sold a product with lead."

Lead is a cheap ingredient that makes paint lustrous and shiny. As companies seek out low-cost manufacturing, it's not surprising lead has leached into the supply chain. "The market is set up to reward companies for selling the cheapest product possible, not for selling the safest product possible," says Margulis of the Center for Environmental Health.

There is currently no comprehensive federal law in the U.S. banning lead in children's products. But since 1978, there has been a law on the books outlawing the use of lead-based paint in them, which is, obviously, not adequately enforced. The CPSC is currently working on writing rules to limit the amount of lead in children's jewelry, which can sometimes be made of lead, as well as the amount of lead in vinyl products. Some states aren't waiting. In California, a law banning lead in children's jewelry went into effect in September 2007.

In response to the recent recalls, Sen. Bill Nelson, D-Fla., has proposed legislation, the Children's Products Safety Act of 2007, which would require independent, third-party testing of all toys and products for children ages 5 and under, and prohibit the import of children's products that have not been tested by a third party. Last year, when dangerous levels of lead were discovered in children's gifts in the U.S. Capitol gift shops, Rep. Henry Waxman, D-Calif., and Sen. Barack Obama, D-Ill., introduced legislation that would set strict federal standards for lead in any product marketed to children under age 6, but it languished in Congress. Giving it another shot, Sen. Obama introduced the Lead Free Toys Act of 2007, which would give the CPSC authority to ban children's products containing lead.

The flurry of recent recalls may give the legislation some traction. Until then, parents are simply left to wonder and worry what much-loved toy will be recalled next.