Luciano Pavarotti's golden voice was a siren song luring the young and the uninitiated into opera's deep cultural waters. 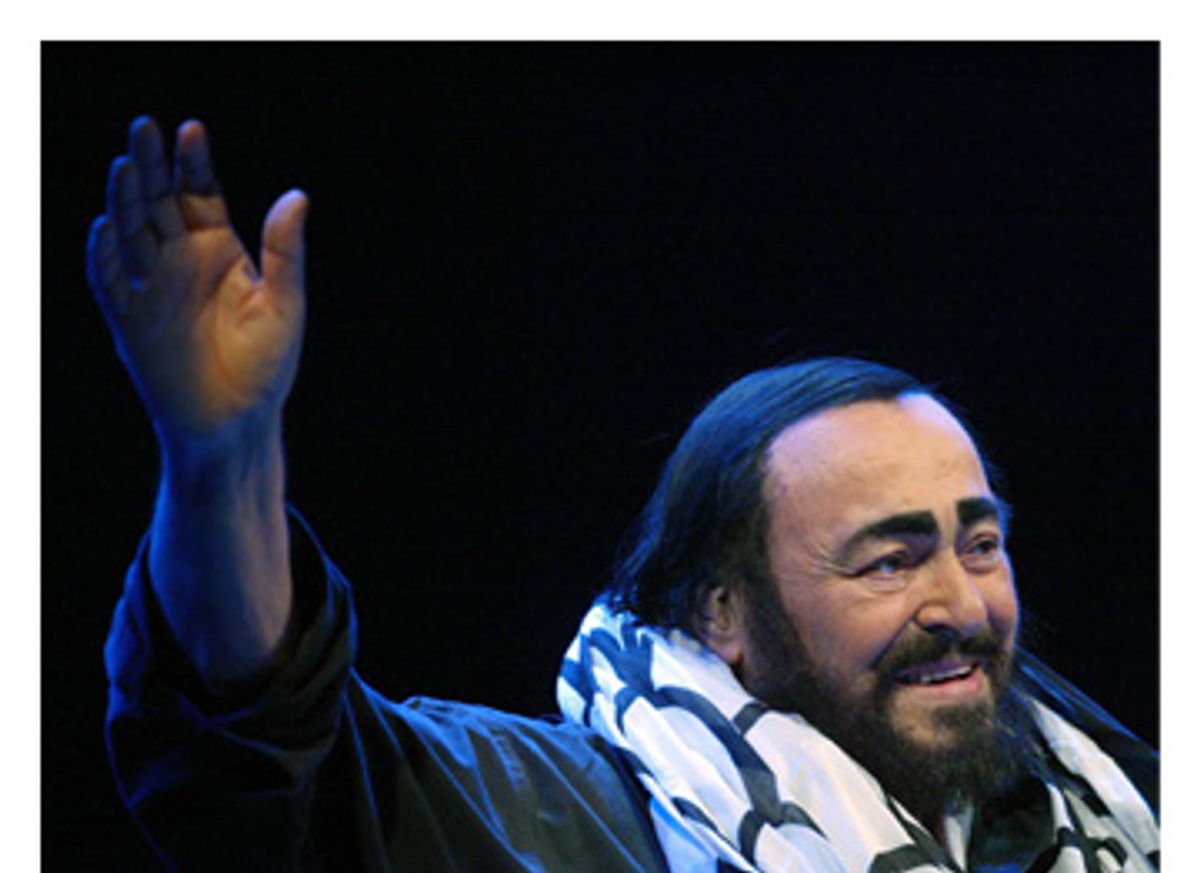 There is a tinge of irony in the affectionate tributes pouring forth for opera superstar Luciano Pavarotti, who died in Italy Thursday morning after a year-long battle with pancreatic cancer. For decades, highbrows of a certain stripe criticized the tenor for ostensibly selling out his high-operatic talents by slumming in populist schlock like the "Three Tenors" concerts and duets with pop stars such as Bono, Sting and Vanessa Williams. Pavarotti liked to characterize these forays as a chance to introduce new audiences to opera, particularly young people who might not otherwise have been exposed to it. While purists scoffed at such claims, I can offer one instance in which they were wrong and Pavarotti was right, for I was one of those young converts pulled into cultural waters by the siren song of that golden voice. Pavarotti was my gateway drug.

In my 12th year, during a visit with family in West Virginia, my great-grandmother left the TV on after her nightly dose of "The Lawrence Welk Show" on PBS. The program that followed was "Live From Lincoln Center," and in the darkened living room I watched as a substantial man in a white tailcoat strode onto the stage, clutching an oversize white handkerchief. Apart from Elmer Fudd singing the immortal pseudo-Wagnerian "Kill the Wabbit," I had never heard a note of opera, and when the man in the penguin suit opened his mouth, I found myself dumbstruck that such sounds could pour forth from a human throat. By the time the concert concluded an hour and a half later, the New York audience was in a frenzy, and Pavarotti was lapping it up, his smile wide, his arms flung even wider, as if to embrace the world itself. In my young eyes, this man was some kind of superhero. It was 1982, and I was hooked.

A few days later I checked five Pavarotti LPs out of the local library; the following week, three more. My new favorite song, I decided, was "La donna è mobile," from Verdi's "Rigoletto." The following week, as I browsed further, I noticed that another singer had recorded the same aria on a different record. That singer's name was Plácido Domingo, whose artistry I acquainted myself with next. Before long I had branched out to Joan Sutherland, Sherrill Milnes, Marilyn Horne and to non-vocal classical music as well: Bach's Brandenburg concertos, Tchaikovsky's Violin Concerto No. 1, and 20th century fare by Stravinsky, Britten and Philip Glass. Fast-forward 10 years to find me studying voice and singing (not very well) with a regional opera company, coming to the conclusion that opera, while a lifelong passion, was not to be my profession. Two years later, as a television reporter, I met Pavarotti backstage at a concert he gave in Baton Rouge, La. It is, of course, never a good idea to meet one's heroes. The maestro was tired and more than a little churlish, but artists are allowed their temperaments, after all, and despite the disappointing encounter, my reverence remained for the man's unimpeachable artistry.

Except that in the long run, it was not unimpeachable. In opera circles it is widely agreed that Pavarotti would have done well to retire, as had the late Beverly Sills, before his vocal resources had declined too precipitously. During his prime -- roughly the late 1960s to early 1980s -- he possessed not only that unmistakable, burnished voice, but also a superb sense of musicianship: a strong vocal attack and clean release; the ability to renew a note's energy with every throb of the vibrato; and the flexibility to sing with great ardency or with the melting tenderness that Italians call "morbidezza" -- the sound a great hero makes when dying of love. As the '80s yielded to the '90s, the singer sometimes was unable to sustain tones for their full duration, rushing through phrases that he had once wrung of every last ounce of passion and pathos. He began using cue cards to remember lyrics -- in 1994 I saw him use cards for the Italian love song "Non ti scordar di me," which is roughly the equivalent of an American needing cue cards to sing "Mary Had a Little Lamb." He infamously cracked on a high note in a 1992 production of Verdi's "Don Carlo" at La Scala and lip-synced a televised concert that same year, an offense for which he was sued by the BBC.

And then there were the late-career stumbles, which began feeding the tabloids around 2000, when after nearly 40 years of marriage, he divorced his wife Adua and soon thereafter married his onetime personal assistant, Nicoletta Mantovani, three years younger than the youngest of his three daughters. He canceled what was to have been his final performance at the Metropolitan Opera in 2002, forcing the Met's then-general manager, Joseph Volpe, to make a conciliatory appearance on the house's stage, telling disappointed audience members, "This is a hell of a way to end a beautiful career." Channeling Gustav von Aschenbach, Pavarotti looked increasingly bizarre in TV appearances, his toupee, beard and bushy eyebrows dyed a severe shoe-polish black.

The nadir came in February of last year at the opening ceremonies of the Winter Olympics in Turin, Italy. Enveloped in a tentlike black cape, looking like a sad, oversize Count Dracula, the once-great tenor warbled his signature aria, Puccini's "Nessun dorma," transposed down from its original key so that the triumphant high B was only a B-flat.Watching the performance, now in my 30s and no longer the wide-eyed hero worshipper, I felt the urge to look away but could not. At the time, Pavarotti was five months away from being diagnosed with the cancer that would ultimately take his life. "All'alba vincerò!" he sang in the aria's final phrase, "On the morn I shall win!" Pavarotti did not win his battle with cancer, but he has won a place in a pantheon to which perhaps only three other opera singers -- Enrico Caruso, Jussi Björling, Maria Callas -- belong. For all the young turks who have been crowned "the next Pavarotti" (Roberto Alagna, Rolando Villazón and Juan Diego Flórez, to name a few), there is no one to don the crown worn by Pavarotti in his prime. Did the "King of the High C's" tarnish that crown with his large-scale personality and even larger-scale arena extravaganzas? History may answer in the affirmative, but I know one former 12-year-old who would beg to differ.

A former local television news anchor, reporter and writer, Richard Speer worked at network affiliates including those in Orlando, Fla.; Jackson, Miss.; and Fayetteville, Ark. He is the author of "Matt Lamb: The Art of Success" (Wiley, 2005).