Jesus is my dorm advisor

Patrick Henry College grooms fundamentalist kids to be America's future leaders. A new book looks at how these elite students cope with the pressure to bridge secular and religious worlds. 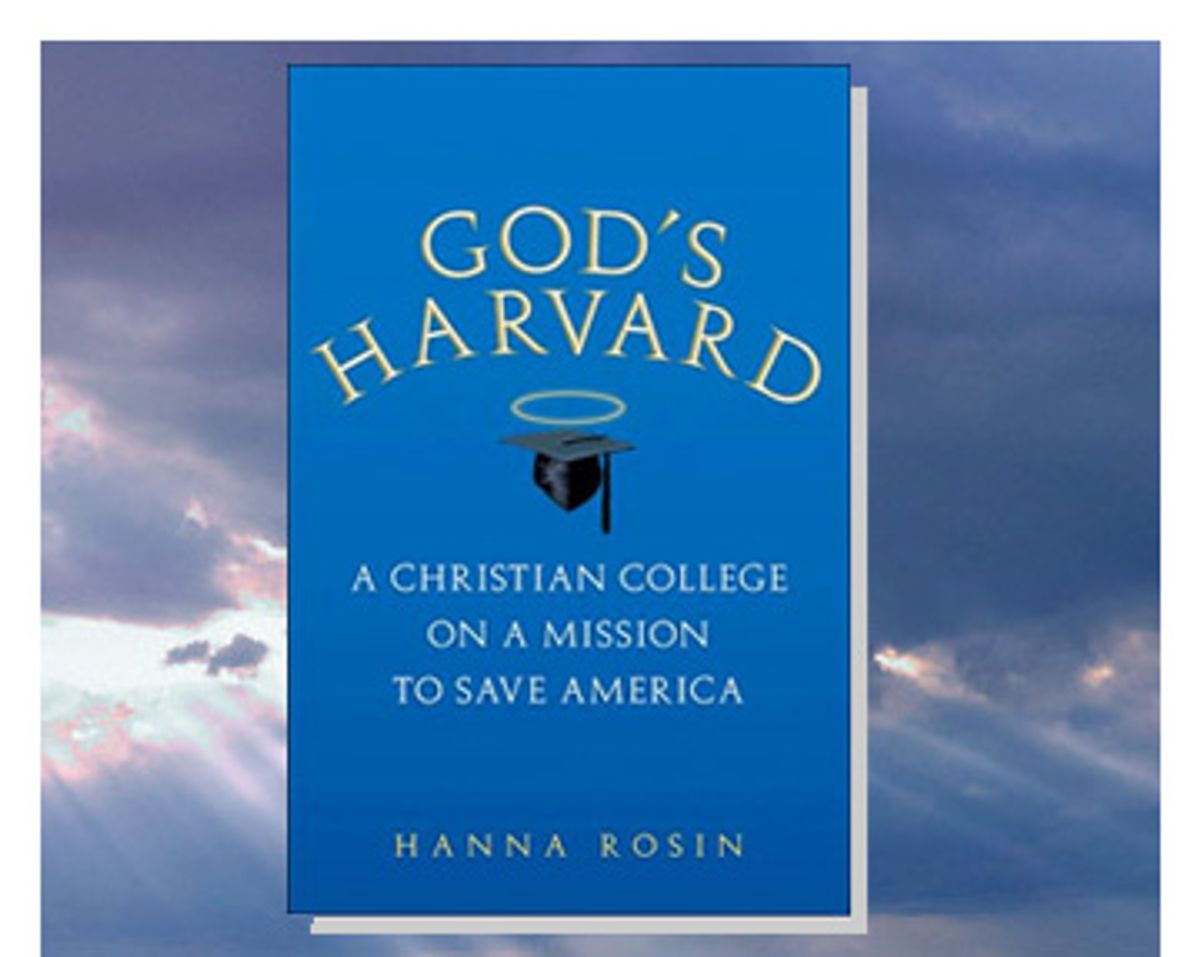 It was the beginning of November, with finals just a few weeks away, but papers and tests were the last things on Derek Archer's mind. He and other Patrick Henry College students had been busy knocking on 5,337 doors, making 1,400 phone calls, and stuffing reams of fliers under windshield wipers -- all on behalf of Jerry Kilgore, Virginia's 2005 Republican candidate for governor. One day before the election, the teenaged Archer -- unable to bear the thought of inactivity -- stood up to address the other campaigners. "If you're not faithful in the small things, when it comes time to say, 'Hey, I want to be president of the U.S.,' God will not grant you those things," he told them. "So let's knock on those doors and make those calls, okay?"

Archer's rally-the-flock instincts might seem unnervingly precocious, but then, galvanizing the right-wing masses is exactly what he's being trained to do, in the same way that conservatory students are coached to sail through effortless arpeggios. "God's Harvard," Washington Post writer Hanna Rosin's account of the year and a half she spent on Patrick Henry's campus in Purcellville, Va., is an in-depth account of the grooming process students like Archer undergo. Like Regent University (disgraced Bush aide Monica Goodling's alma mater) and Liberty University, Patrick Henry exists for the sole purpose of transforming fundamentalist kids with intellectual chops into America's future conservative leaders. On paper, at least, the school is ahead of the curve: Since its founding in 1999, its graduates have worked for almost every Republican congressperson, and every year, the 300-member student body scores as many White House internships as Georgetown's.

More than 80 percent of Patrick Henry's students -- average SAT score 1320 -- hail from households where parents approach child rearing like a controlled experiment, home-schooling their offspring to deflect ungodly outside influences. Patrick Henry's founder, Republican activist lawyer Michael Farris, has sought out these hothouse kids ever since the school's inception. In his mind, they are the ideal clay from which to mold leaders who express the certainty of their convictions as clearly on the congressional floor as they do in the pulpit. "In conservative circles," Rosin writes, "homeschoolers are considered to be something of an elite group -- rough around the edges but pure in their focus, capacity for work, and ideological clarity."

Most Americans, if they've heard of Patrick Henry at all, relegate it to the same category as schools like Bob Jones University -- institutions designed to churn out a never-ending supply of cheerleaders for Christ (prominent Bob Jones alums include TV preacher Billy Graham and "Left Behind" author Tim LaHaye). But Rosin shrewdly pinpoints how Patrick Henry's mission diverges from that of its less plugged-in fundamentalist peers and why those differences matter. Farris doesn't just want to produce students who are on fire for the Gospel -- he wants to train them to occupy the highest offices in the land, to upend the conventional wisdom that seizing worldly power requires compromising spiritual principles. He doesn't want "adapters who bend to the will of the mainstream," Rosin asserts, but "shape-shifters who can move between two worlds with their essential natures intact."

On the surface, Farris has succeeded with flying colors. It's only a matter of time, some Hill staffers think, until the first president from Patrick Henry is elected. But shape shifting is a tricky prospect, and Rosin is most compelling when she explores the ways Farris' vision sometimes unravels as students navigate between the outside world and the college's insular bubble. Filmmaker Mark Shane is one of the school's most impressive graduates; he got a White House internship his sophomore year, then nailed down a summer job working for a major television network. But when he returned to campus in the fall, his very success at carrying out Farris' dictate -- making a mark in the secular world -- seemed, ironically, to cast a shadow over him. He lost his position as resident advisor, and he started to forgo chaste dorm gatherings in favor of clubs that served up alcohol and exposed flesh. He professed to have kept his faith -- "If people are partying and the Holy Spirit says, 'Get out,' I have to get out" -- but when Rosin pressed him about how he managed to reconcile his lifestyle with his beliefs, he hit a wall. "I don't know," he shot back. "I'm only twenty-one years old."

Patrick Henry professors know that the complicated two-step between secular and religious realms is likely to result in what students call "stumbling," intellectual as well as moral. Rosin's explanation of how the faculty gird their young charges against this danger reads like a crash course in Orwellian doublethink. Biology teacher Jennifer Gruenke answers students' questions "on two levels: one for the secular world and one for Christians." She assigns them a biology textbook that features a sizable section on primate evolution, but she also endorses the biblical account of creation. Many students feel comfortable shuttling between these two disparate worldviews, a good illustration of how compartmentalized thinking can blot out contradiction. (In this respect, they seem like heirs to Enlightenment philosopher Francis Bacon, who wrote that science and religion should be "kept separate and never mingled or confounded.")

Patrick Henry's perennial charge to its students -- that they learn to occupy incompatible spheres simultaneously -- resonates in unique ways among the school's female population, and Rosin is an astute chronicler of the fallout. Young women who might have gone to Harvard or Yale had they been raised in other households must reconcile their own desire for high-powered careers with the Christian subculture's expectation that they retreat into submissive wifely roles.

Though Farris has paid lip service to the importance of educating women, campus rules enforce traditional notions of inequality between the sexes (women are not allowed to lead morning chapel, for instance). It's "The Feminine Mystique" all over again, with a fundamentalist spin, and many Patrick Henry women cope by retaining only partial awareness of the conflicting messages the school sends. Rebekah, a blond campus athlete whose Florida legislator father wrote the original Save Terri Schiavo bill, told her parents starting at age 2 that she wanted to join the CIA. She lived in St. Petersburg and studied Russian in pursuit of that goal. When she spoke with Rosin, her visions of the future were downright schizophrenic. "I don't like the idea of being someone's wife," she said. "But I do wanna have like fifteen kids. And I want to homeschool them all."

It's easy, based on the book's title alone, to assume that Rosin is out to demonize the young evangelicals at Patrick Henry, to damn them in the scathing light of their own inflexible beliefs. Indeed, a journalistic hack would have no trouble portraying these kids as miniature Jerry Falwells, not strictly by compromising accuracy but by cherry-picking significant details. (Archer, for instance, dates his conversion to age 6 and writes editorials with tag lines like, "I implore you, my fellow Christians. Do not stand here idle.")

But Rosin is a better and more honest writer than that. Despite her own aversion to fundamentalist dogma -- at one point she states, point blank, that she doubts any of her subjects would ever moderate their views enough to win her vote -- she steers largely clear of political ax-grinding. There's no Al Franken-esque invective against the GOP elite; instead, Rosin approaches her investigation in a more detached, anthropological spirit. Like Naomi Schaefer Riley, who wrote about faith-based campuses in 2004's "God on the Quad," Rosin does not seek to pass judgment on the brave new world she is observing, but to probe participants' complex motivations in order to get a better sense of how it operates. Accordingly, her protagonists come off not as ideologues programmed to the nines, but as vulnerable human beings evaluating their place in life.

One of the book's subjects, Sarah Chambers, lived with Rosin and her husband, Slate editor David Plotz, for a few weeks while completing an internship in Washington. Chambers grew so attached to the couple's young children that she gave their daughter a white model horse that she herself had cherished as a girl. One evening, Plotz challenged her: Since our family hasn't accepted Christ, do you think we're going to hell? Chambers had to reply. "Yes," she said finally. "But I'm not jumping up and down with joy about it." It is at moments like these that Rosin's narrative rises above the level of culture-war dispatch and becomes, instead, a rare window onto the turmoil that results when convictions anchored in the abstract are exposed to the messiness of reality.

Such evergreen observations aside, it's impossible not to feel like Rosin's timing is just a little bit off. The 2006 midterm purge of congressional Republicans and the accompanying surge of anti-Bush sentiment -- the born-again president's approval rating now hovers around 30 percent -- have diminished the odds that Patrick Henry students will make an immediate impact on the political landscape. Still, the new breed of savvy evangelical the school is producing will outlast temporary power shifts; the days when religious leaders courted irrelevance by questioning a Teletubby's sexuality are over. Despite the difficulties involved, students like Archer and Chambers are learning to grasp the delicate balancing act that's required to straddle two worlds, the importance of assuming protective coloration to ascend within the secular hierarchy. Those outside their narrow sphere would do well to pay close attention.