What you missed while watching "Rescue Me"

Salon watches another GOP debate so you don't have to: Fox News men get plucky! Dems take heat for Larry Craig! McCain surges at Romney! And much more. 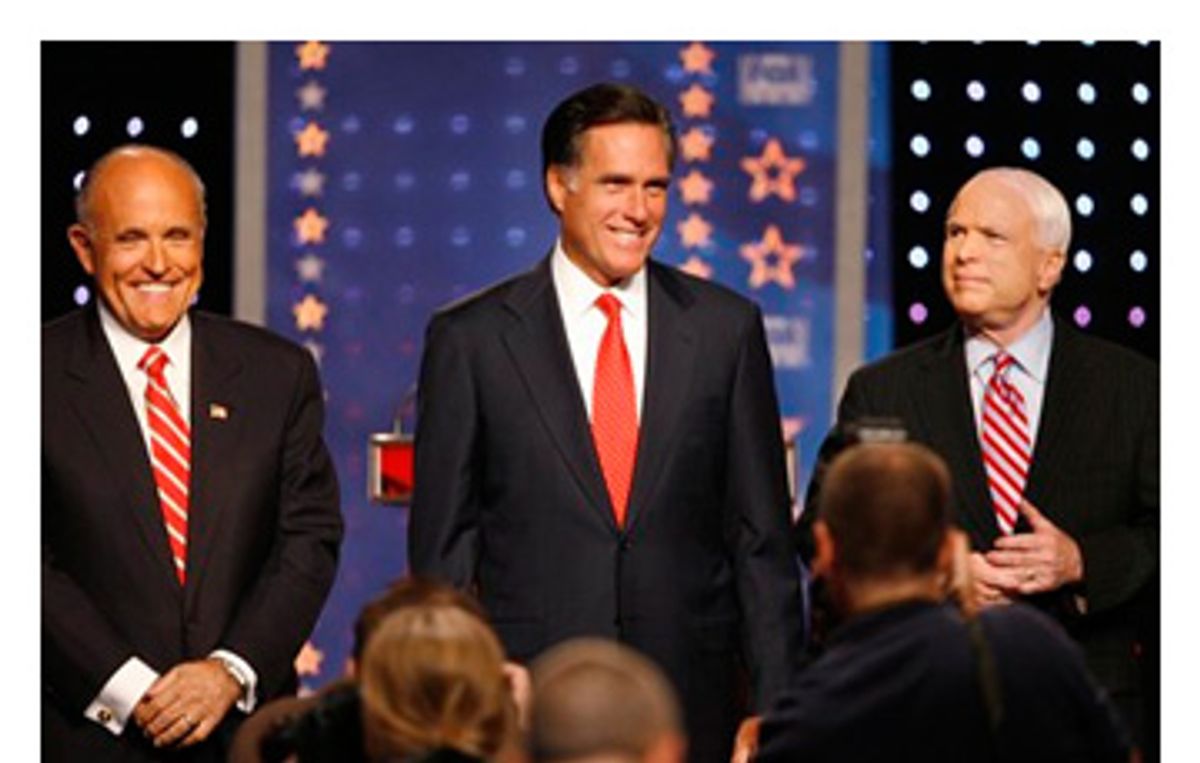 0 minutes. Fox News' Brit Hume welcomes everyone to yet another goddamn presidential debate. This time we're in Durham, N.H., with the Republicans, at the University of New Hampshire hockey arena. Hume explains that people up here toss fish onto the ice "after the home team scores a goal." But he does not explain what this has to do with the debate. Does the cold fish represent the Republican Party sliding over the ice of democracy? Or is the fresh seafood of liberty being cooled by the frozen water of cable television? No idea. Let's move on.

3 minutes. Counting is in order. There are eight candidates onstage, down from 10 just a few months ago. Two dropped out, though it's hard to remember their names. One new guy, former Tennessee Sen. Fred Thompson, has since joined the race, but he's in California because he has been booked on "The Tonight Show With Jay Leno." So Hume asks, Who is smarter? You "guys who are here" or Thompson?

4 minutes. It's canned-joke time. Former Arkansas Gov. Mike Huckabee says that he was also booked for "The Tonight Show," but he gave up his slot "because I'd rather be in New Hampshire with these fine people." The fine people applaud. Texas Rep. Ron Paul says he's glad Thompson is running because he helps to split the Republican pro-war vote. Laughter. "Maybe we are up past his bedtime," kids Arizona Sen. John McCain to even more laughter. Former Massachusetts Gov. Mitt Romney chimes in: "The only question I have for Sen. Thompson is, 'Why the hurry?'" Maybe the fish represents the rotting carcass of comedy freezing on the slick surface of presidential politics.

9 minutes. Former New York Mayor Rudy Giuliani is asked to explain his 1994 statement that hardworking illegal immigrants are "the people who we want" in New York City. The former mayor says that he was only explaining that he wanted illegal immigrants to feel like they could report crimes to the police, so the police could catch the criminals, because "the next time a crime is committed, it could be against a citizen or a legal immigrant." Huh? Is he implying that crimes against noncitizens matter less? Definitely smells fishy.

16 minutes. California Rep. Duncan Hunter gets a chance to talk about the border fence he wants to build across America's Southern badlands. "I built that border fence in San Diego. And it's really two fences. It's a double fence," he says. "It's not that scraggly little fence that they keep showing on CNN with people hopping over it. If you get over my fence, we sign you up for the Olympics immediately." There is laughter and applause even though Hunter has just proposed allowing illegal aliens to compete on the U.S. Olympic team.

22 minutes. Romney, who oversaw the 2002 Winter Games in Salt Lake City, tries to defend the sanctity of the Olympics. "I was at the San Diego border and met with our Border Patrol agents. They told me that more than half of those that try and come across those fences are able to do so," says Romney. He has a point. There is no way to train thousands of people for the hurdles and high jump.

25 minutes. Hunter outdoes himself by saying something even more crazy. The subject is Idaho Sen. Larry Craig, who recently pleaded guilty to charges that he tried to proposition a police officer in a men's room and then announced that he planned to resign from his office. Hunter uses these facts to attack Democrats. "When our guys have problems like this, they leave," Hunter said. "When the Democrats have problems like this, they often make them chairmen of their respective committees." Bomb. Shell. What does Hunter know about Sen. Pat Leahy and Rep. John Dingell? And when will he tell us?

34 minutes. Hume takes the first commercial break. There are ads for Norfolk Southern, the Iraq war and E-Loan. Over on CNN, Larry King has former President Bill Clinton in front of the big Lite-Brite map of the world. Back on Fox, Sean Hannity shows up in a pink tie to ask everyone to stay tuned after the debate for spin.

40 minutes. The Fox team wants to cause trouble. Host Wendell Goler points out that Romney has discussed transitioning to a "support phase" and a "standby phase" in Iraq over the coming year. "Correct me if I'm wrong," Goler continues, "but it seems even Hillary Clinton is willing to commit troops to Iraq longer than that, sir." In a Republican debate, comparing a man to Hillary Clinton is like pulling down his pants and laughing.

41 minutes. "I don't have a time frame that I have announced," Romney says, looking a little shaken. He adds that he does want to bring the troops home, and that "down the road" he does not anticipate a permanent U.S. presence in Iraq. Romney also says that he is looking forward to the military reports due next week on progress in Iraq. "The surge is apparently working," he says.

43 minutes. McCain sees an opportunity and strikes. "Governor, the surge is working," he says. "That's just what I said," Romney counters. But McCain has him where he wants him. "Not 'apparently,'" McCain says, digging in the knife. "It's working." Romney shuts up.

46 minutes. Paul begins talking about al-Qaida's objections to U.S. military bases on the Arabian peninsula, suggesting that they should be removed to lesson tensions in the region. Fox's Chris Wallace won't stand for it. "You're basically saying that we should take our marching orders from al-Qaida," the host says.

47 minutes. This pisses off Paul. His eyes narrow. His mouth gets small and he starts pointing his pen at Wallace to punctuate his words. "No," he shouts back. "I'm saying we should take our marching orders from our Constitution. We should not go to war without a declaration. We should not go to war when it's an aggressive war. This is an aggressive invasion." Some in the audience boo. Perhaps the dead fish is America skidding on a frozen lake of an unending war.

48 minutes. Huckabee, who is spoken of as a possible vice-presidential candidate, interrupts his answer on Iraq to praise McCain. "If there's anybody on this stage that understands the word 'honor,' I've got to say Senator McCain understands that word, because he has given his country a sacrifice the rest of us don't even comprehend," Huckabee says. McCain seems to really appreciate the sentiment. Huckabee then says he supports the surge because America broke Iraq and the American people now have a responsibility to fix it.

49 minutes. Paul is still revved up from the al-Qaida comment, so he goes after Huckabee. "The American people didn't go in," he says, no longer pointing his pen. "A few people advising this administration, a small number of people called the neoconservatives, hijacked our foreign policy. They're responsible, not the American people." He gets applause.

50 minutes. Huckabee responds. "Congressman, we are one nation. We can't be divided. We have to be one nation, under God. That means if we make a mistake, we make it as a single country: The United States of America, not the divided states of America," he says. The fish, at this point, maybe symbolizes the American public. The neoconservatives are the butchers who chop off the fish head. The ice is the post-Sept. 11 world.

57 minutes. A question is piped in from a New Hampshire diner for Mitt Romney. But it's not really a question. A voter named Mark Riss, who has a son serving in Iraq, basically wants to chew out Romney for comparing military service to the Romney boys' volunteer work on the Romney campaign. "I know you apologized a couple of days later after a firestorm started, but it was wrong, sir, and you never should have said it," Riss says. Romney smiles. He is cowed. "Well, there is no comparison, of course," he says.

62 minutes. Colorado Rep. Tom Tancredo chimes in to defend torture, by saying it is not really torture. "Yes, I would certainly waterboard," he says. "I don't believe that that is, quote, torture."

85 minutes. After another break, Hume proposes a role-play for all the candidates. Iran, he says, is on the verge of developing nuclear weapons. The United Nations won't act. Israel is under threat. Inspectors have pulled out. And Iranian meddling in Iraq has worsened. What do you do?

86 minutes to 96 minutes. Each of the candidates finds a different way to avoid answering the question directly.

97 minutes. Hume says, "That is it for us tonight." Fox cuts to Hannity, who is now, inexplicably, wearing a blue tie. Hannity introduces pollster Frank Luntz, who has a focus group of 29 Republican voters at a restaurant in New Hampshire.

99 minutes. Luntz asks the voters to raise their hands if they think the candidates exceeded their expectations. No hands get raised. He asks how many were disappointed. They all raise their hands. "This is not a good night," Luntz concludes. The fish on the ice is definitely dead.