Killing her softly with his song

Barack Obama wants to transform politics. But can he defeat Hillary Clinton by casting her as the divider and himself as the uniter? 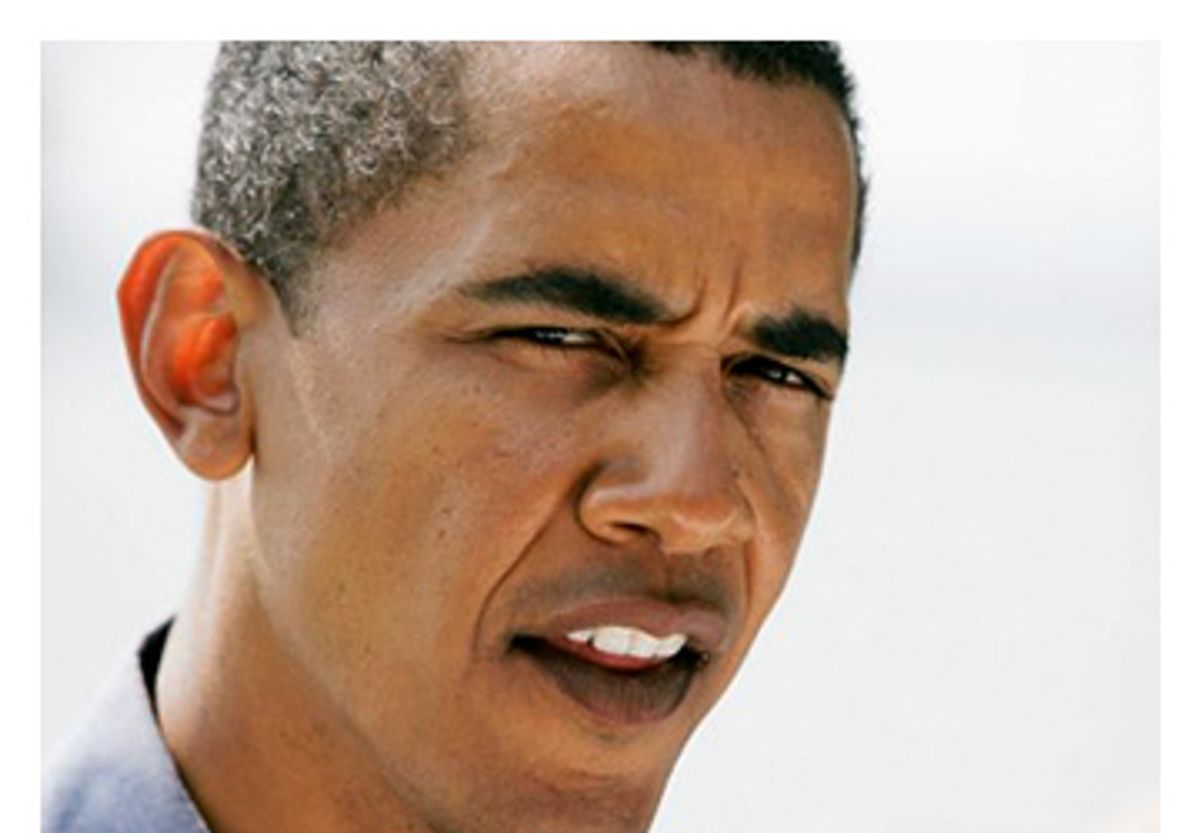 Barack Obama has long been searching for a way to end his campaign appearances with a final burst of inspiration -- a magic incantation that will prompt voters to exit humming the title tune or, here in Iowa, to fill out caucus cards pledging their eternal troth. As a candidate who has elevated cool understatement to an art form, Obama is questing after something more enduring than heady cheers or a brief outpouring of partisan passions.

"He is allergic to cheap applause," said media consultant David Axelrod, Obama's closest advisor, during a Wednesday breakfast interview. "He thinks it doesn't get to the heart of the matter. You can fill up on applause lines, but 30 minutes later you're hungry again. With Barack, after he delivers a speech, you think about it."

But how do you win votes with the rhetoric of reflection as the Democratic race moves into post-Labor Day overdrive? Obama has proved to be the hottest political attraction in politics, aside from the Clintons reprising their two-for-the-price-of-one routine. Yet, after following Obama for two days in rural northern Iowa this week, I wonder whether the magnetic first-term Illinois senator and his unorthodox campaign can prevail in this tradition-minded state with its old-fashioned, you-must-show-up-to-participate caucus system.

In visual terms, the Obama rally Wednesday on the shore of sun-dappled Storm Lake was a political advance team's fantasy. (Axelrod had filmed an equally scenic campaign appearance Tuesday, against the backdrop of cornfields as high as an elephant's eye in Guthrie Center.) Speaking to a midday crowd of roughly 600 (Storm Lake's population: 10,000), Obama, dressed in tan slacks and a gray dress shirt with the sleeves rolled up, managed to distill his different-drummer appeal to its essence.

"A lot of people ask me," he declared in a concluding riff, "why you instead of Hillary? Why you instead of John Edwards or other candidates?" He then briefly returned to the central image of his speech at the 2004 Democratic Convention: a fragmented America of warring red states and blue states. "We can't govern because the country is divided," he said. "Nobody can govern."

Well, under this reckoning, maybe one 2008 candidate can govern -- a certain 46-year-old Illinois senator. Answering the why-me question, Obama declared, "What I have the track record of doing -- the experience that I bring to the table -- is putting people together: Republicans, independents and Democrats, to make sure we're actually delivering for the American people."

Putting people together -- is that really the Obama difference? Is this how Obama takes on Hillary Clinton, by suggesting that she's a divider and he's a uniter? The phrase itself, accidentally reminiscent of Richard Nixon's ill-kept 1968 pledge to "Bring Us Together," may not last long in the Obama arsenal. But the underlying argument, which is as much about political style as policy goals, has been central to the Obama campaign since its impromptu beginnings early this year.

Under normal political calculus, the leading challenger (Obama) would be the aggressor, while the unruffled favorite (Clinton) would depend on organization and inevitability to propel her to victory. But unlike Edwards -- who is directly challenging Clinton for being too politically timid to achieve bold dreams -- Obama is trying to rewrite the laws of political combat. Edwards, who is far more strident a populist than he was in the 2004 campaign, may ultimately prove to be a flawed messenger, but his campaign strategy of running at Hillary from the left fits into a traditional framework.

At the end of the Obama rally in Storm Lake, I stood by the roped-off exits, trying to estimate how many Democrats were filling out a "Join Obama for Iowa" card with the all-important box to check: "I will attend my precinct caucus for Barack Obama." My unscientific guess was that about 20 percent filled out the cards or claimed that they had already done so, even though this was the candidate's first appearance in Storm Lake. A 20 percent commitment rate is not high by traditional Iowa standards, but Obama rallies attract far more curious Iowans who are not on the standard rolls of Democrats who invariably attend the caucuses.

Still, Obama has what might be called a not-yet problem. That was the phrase that I heard again and again as the always polite Iowans waved off eager volunteers handing out caucus cards. It is still far too early in the process to make even the haziest guesses about who will ultimately prevail when Iowa Democrats caucus. Polls tell you little, since the allegiance of Iowans is notoriously fickle and it is nearly impossible to predict who will actually turn out on a dark night in January.

Even the mildest criticisms by Obama of his Democratic rivals can be treated as news. Wednesday morning at a backyard house party in Sac City, Obama was bluntly asked whether he yet had the experience to be president. "Dick Cheney and Donald Rumsfeld had the two best résumés in Washington ... and they steered us into the worst foreign policy disaster in a generation," Obama replied, using a line that was lifted from his new stump speech. "So I think the question that people have to ask themselves is: Who has the right experience and who has the judgment to lead this country?"

That was a flick at both Clinton and Edwards (not to mention Chris Dodd and Joe Biden), who all voted to authorize the Iraq war in 2002. In stressing his own 2002 antiwar views as a Senate candidate, Obama said, "Part of the reason that I was able to do that was because I didn't have the experience in Washington of being afraid to do the right thing because of politics." Obama also pointed out -- and this was the line that was featured in the Des Moines Register -- "I've been in elected office longer than John Edwards or Hillary Clinton. I've passed more bills I'm sure than either of them -- certainly in the state legislative level."

With that answer, harking back to his eight years in the otherwise obscure Illinois state Senate, Obama won the backing of the sandy-haired man who asked the original question, Jim Bullock, a local veterinarian. "I've been on his Web site," Bullock said, "but I wanted to hear how he responded to questions. And I was sold."

Make no mistake, Obama is not a political pacifist, nor is he the 2008 version of Bill Bradley, who out of an inner Zen-like calm, refused to fight back when Al Gore pummeled him in the 2000 primary debates. Early this summer, when Clinton pounced on an Obama debate answer over his willingness as president to negotiate with Iran and Cuba, the Illinois senator kept the back-and-forth going for nearly two weeks.

And Obama is not above stunts for the camera, raising his voice in anger during a speech at the Woodrow Wilson Center last month when he got to the sound-bite line about his willingness to send troops to go after terrorists operating unmolested in the tribal areas of Pakistan: "If we have actionable intelligence about high-value terrorist targets and President Musharraf won't act, we will."

But at his core, Obama aspires to be a transformational candidate who changes the rules of politics. He is, as he says in a self-description he uses in every speech, "a hope-monger." And Axelrod insists that the rules of engagement will not change when the campaign enters the rough-and-tumble phase. "We may change the nuances [of the stump speech], but the fundamentals won't change," the Obama strategist said. "The case he is making is comfortable for him."

Obama's comfort level with himself remains one of his greatest strengths as a candidate. Bill Clinton aside, the Democrats have not nominated a presidential candidate who radiated authenticity since Jimmy Carter or perhaps Walter Mondale. And maybe Obama will ultimately be proved correct in believing that red-meat rhetoric and attack-dog politics are becoming as outmoded as the network nightly news.

Paul Tewes, Obama's Iowa coordinator, marveled, "It is something I've never seen before in politics. After people hear him speak, they say that they feel at peace." That phrase -- "feel at peace" -- has also never been used before by a veteran campaign staffer since I covered my first Iowa caucus in 1980.

Maybe Obama has figured out the new political zeitgeist before the traditional politicians and -- yes -- the skeptics in the press corps. Or maybe Obama, the most naturally charismatic politician of this decade, is setting himself up to be the latest political insurgent who fails to dethrone the anointed favorite.