The newest Republican presidential contender tells Iowans he's a regular guy with no real ambition who happens to be seeking the most powerful job in the world. 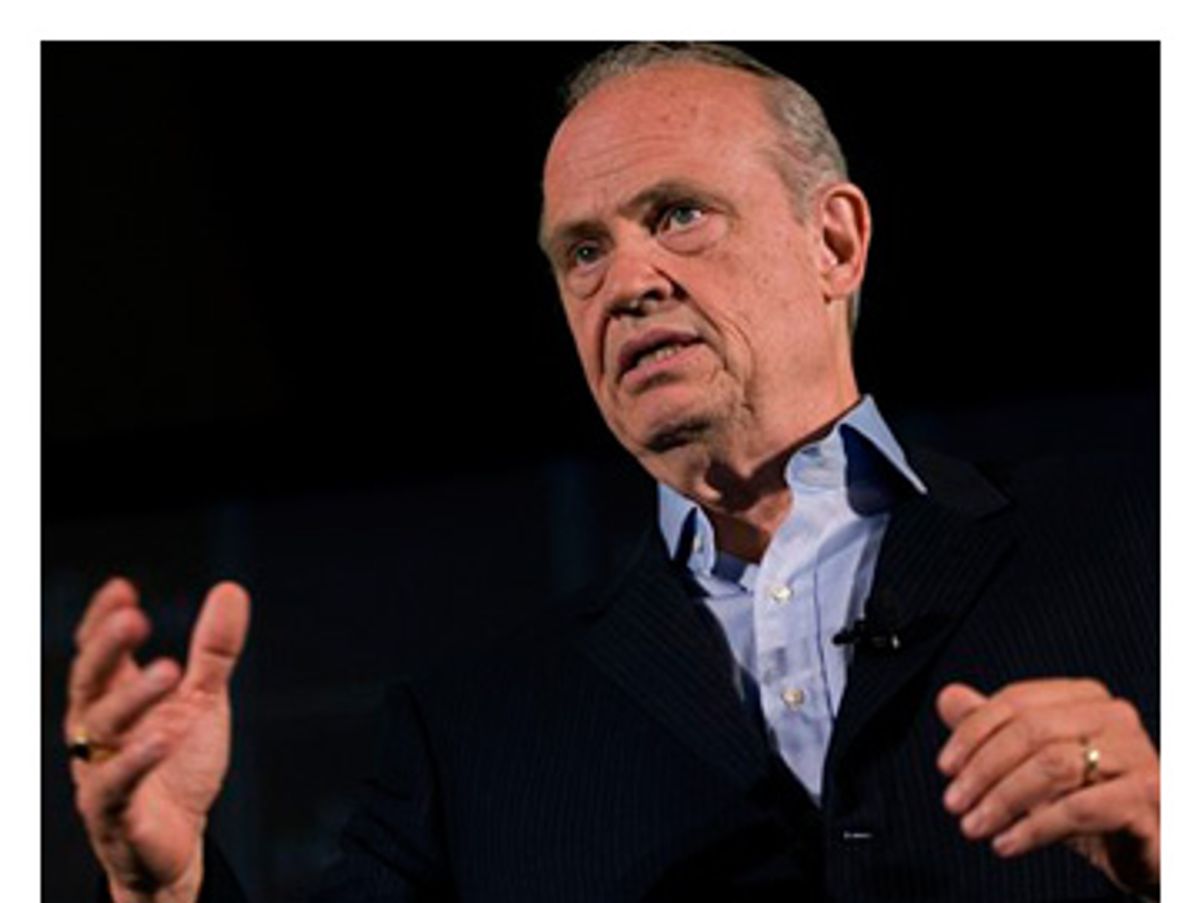 The ol' Southern lawyer Freddie Dalton Thompson stands before two stuffed chickens and a fake white picket fence, where a plastic grapevine pretends to grow at the end of a phony Main Street. He's here to tell a crowd of a couple hundred that he is the real thing, a small-town boy who never had much ambition, who never grew up wanting to be president, who still doesn't know where he stands on many issues -- but ain't America a wonderful country.

"My story is just another American story," says the former senator, his baritone Tennessee drawl rounding the edges of his words. "Growing up in a town that wasn't quite this big. My folks came in off the farm. Didn't get a chance to go to high school or any further education. Had to go to work. Became the most wonderful parents anybody could have. Because they really saw in me a little more than I saw in myself sometimes."

Thompson goes on like this for about 20 minutes, keeping the crowd's interest, even though they are squeezed in like matchsticks at one end of Music Man Square, an indoor museum built to celebrate the musical of the same name. "I've seen America from every vantage point. I've seen it from the factory floor on the graveyard shift," he says. "I've been able to dine in foreign capitals with foreign leaders all over the world."

His speech patterns are hypnotic and calming. He paces back and forth, looking at shoes as often as faces. Nothing is forced, emotional or too complex. He explains his decision to abandon a lucrative acting career for the world's most difficult job, presidential candidate, as if he woke up one morning and decided to put down the whiskey bottle for his family. "I could sit back and read somebody else's script and maybe clip coupons once in a while," he says. "Or I could step up."

He chose the latter, however hesitantly, leading to his Republican campaign announcement on "The Tonight Show" last Wednesday, followed by a chartered bus tour of Iowa's browning cornfields -- three days, six events, about as many folksy aphorisms as there are catfish in a Mississippi mud pond. The crowds weren't as big as they might have been, and the press generally panned his performances on the stump for being rambling and subdued. Fresh memories also remained from the comedy of campaign errors that preceded his announcement, as he cycled through a cavalcade of campaign managers and press secretaries, dismissing the latest one just days before the announcement.

But anybody who mistakes this nascent campaign for a fluke or a flight of fancy just doesn't understand America as well as Freddie Thompson does. Set Thompson up against the current Republican field and you'll get the idea. There is Willard Mitt Romney, a cyborg-like ex-governor, who is tough to take at face value, if only because he keeps changing his mind so he can say the right thing. There is Rudolph William Louis Giuliani, an odd and commanding New Yorker with a strange accent and a pro-choice record, who doesn't actually spend much time campaigning. There is John Sidney McCain III, a war hero with no money and an immigration problem, who everyone seems to think is yesterday's news. And there is Michael Dale Huckabee, a funny former governor and Baptist preacher, who is still struggling to convince people he can stare down bin Laden.

Add Thompson's 6-foot, 5-inch frame to the mix, and his advantage is clear. He is new to the game, and unlike all these politicians who try so hard, he is just like you. He even says so on the stump. "Let's get right to the chase," he told a crowd in Sioux City on Friday. "The main question that you have a right to know from me is why I'm running for president. And the answer is pretty simple. I'm just like you are."

If this sounds hokey, that's beside the point. If it sounds hypocritical, coming from a rich former lobbyist and actor who lives in one of the nation's toniest towns, McLean, Va., the crowds in Iowa didn't seem to notice. In fact, they ate it up. Presidential campaigns are often spoken of as contests of ideas, but more often they play out as contests of charisma. Voters don't choose the song as much as they choose the singer. No one would have listened to "Baby One More Time" if Britney Spears didn't look like Britney Spears. Even Thompson's rivals have to admit that the guy sure knows how to play his own part, large, lumbering, world-weary and cigar smoking. Never mind the issues.

"It really doesn't matter what issue is at hand as long as he has the fundamentals and the principles to make the right decision," one Republican voter, a maintenance man named Chris Enos, told me after Thompson spoke in Cedar Rapids on Saturday. "He's everybody's dad. He's everybody's grandpa. He just is a likable person."

Video: On the road with Fred Thompson

After Thompson finished up in Mason City, I fell into conversation with Dean Davidson, a Republican business consultant from Minneapolis, who had stopped by during a visit to Iowa to see some family. "I get so tired of the people who say they know the answers to everything," he told me, explaining the Thompson appeal. "When he talks about working on the factory floor, dirt under your fingernails, and how his parents taught him to achieve something, that's me." After an event in Des Moines, a third voter, Jim Deeds, explained the magic this way. "He's the real deal," he said. "He's not Ronald Reagan, but he's a close second."

Such sentiments are confusing to the national press, an ambitious crowd that distrusts those who brag of meandering through life. We look at fundraising numbers, where Thompson trails badly, and issue positions, which Thompson mostly lacks. As the Thompson caravan crossed northern Iowa Friday, Todd Harris, the campaign's communication director, cycled print reporters into the candidate's bus for interviews. Amid an array of comfy chairs and flat-screen televisions, Thompson reclined, dutifully dodging just about every question of policy.

How should America fix the Social Security problem? No plan yet. What did he think about the so-called Fair Tax, which would replace income taxes with a national sales tax? It should be studied. What did he make of the recent Labor Department statistics suggesting a recession? "Oh my goodness, I will not be predicting a recession on this bus." How can we fix campaign finance, a topic he worked on in the Senate? "We need to enforce the law that's on the books." What about trade? "Trade is good." What did he wish that President Bush had done differently? "You are getting a little more specific and detailed than I want to get."

A consummate pro, Harris assured everyone that issue positions were forthcoming, but no one expects Thompson to run an issue-based campaign. The Thompson message is the man, and it will always be like that. In the tradition of George W. Bush and Ronald Reagan, he is running to win the have-a-beer primary, hoping his Southern charm makes up for anything he lacks on his résumé, which only features eight mostly undistinguished years in elected office as a senator. The rest of his stump speech is conservative cliché. "Security. Unity. Prosperity," reads the campaign motto on the side of the bus -- whatever that means. He talked about opposing abortion, securing the border, supporting the Second Amendment, seeking conservative judges, opposing gay marriage and favoring a strong national defense. "We'd taken a holiday from history after the Cold War," he said of the nation's military posture. "A government that is big enough to do everything for you is powerful enough to take everything away from you," he said of his federalist philosophy. "We have to send a message to those folks in Washington," he prattled on, leaving out the fact that he lives a dozen miles from the Capitol. At a rally in Davenport, on the banks of the Mississippi River, he was asked what he would do about the healthcare crisis in his first 100 days in office. "I'm not going to tell you what I'm going to do in the first 100 days," he told the voter.

This approach to politics, putting personality over policy, has been tried before to great effect. For much of the primary season in 1999, George W. Bush didn't say much as he traveled the country trying to convince people that he was something like normal. A few years back, in California, another actor named Arnold Schwarzenegger won the governor's mansion by repeating platitudes that convinced everyone he was tough and not crazy. Todd Harris, it should be noted, ran communications on that campaign.

But Thompson may be the first serious presidential candidate in modern memory to make his own lack of ambition such a prominent part of his regular-guy pitch. He credits much of his success to luck and the encouragement of others. It's a strategy that draws on the myth of Cincinnatus, the Roman dictator who gave up power to tend to his farm, only returning years later when the republic needed him to put down a revolt. George Washington cited Cincinnatus after winning the Revolutionary War, when he gave up power and went back to his farm. He later served as president only because the nation needed him, not because he wanted the job. Thompson is making the same sale.

"I'm not here today because I have had a lifelong ambition to hold this office," he said in Cedar Rapids. "And I am not here because I have all the answers to all the problems in this country." In an odd way, this admission made the voters I spoke with like him more. Without exception, they believed politics and politicians had been a failure. They didn't see why America shouldn't just call in a regular guy from the farm. And it didn't matter that in Thompson's case, the farm happened to be a television-acting career in New York City.