I never thought that the GOP posed a threat to the well-being of our nation. But these days, I no longer recognize my old party. 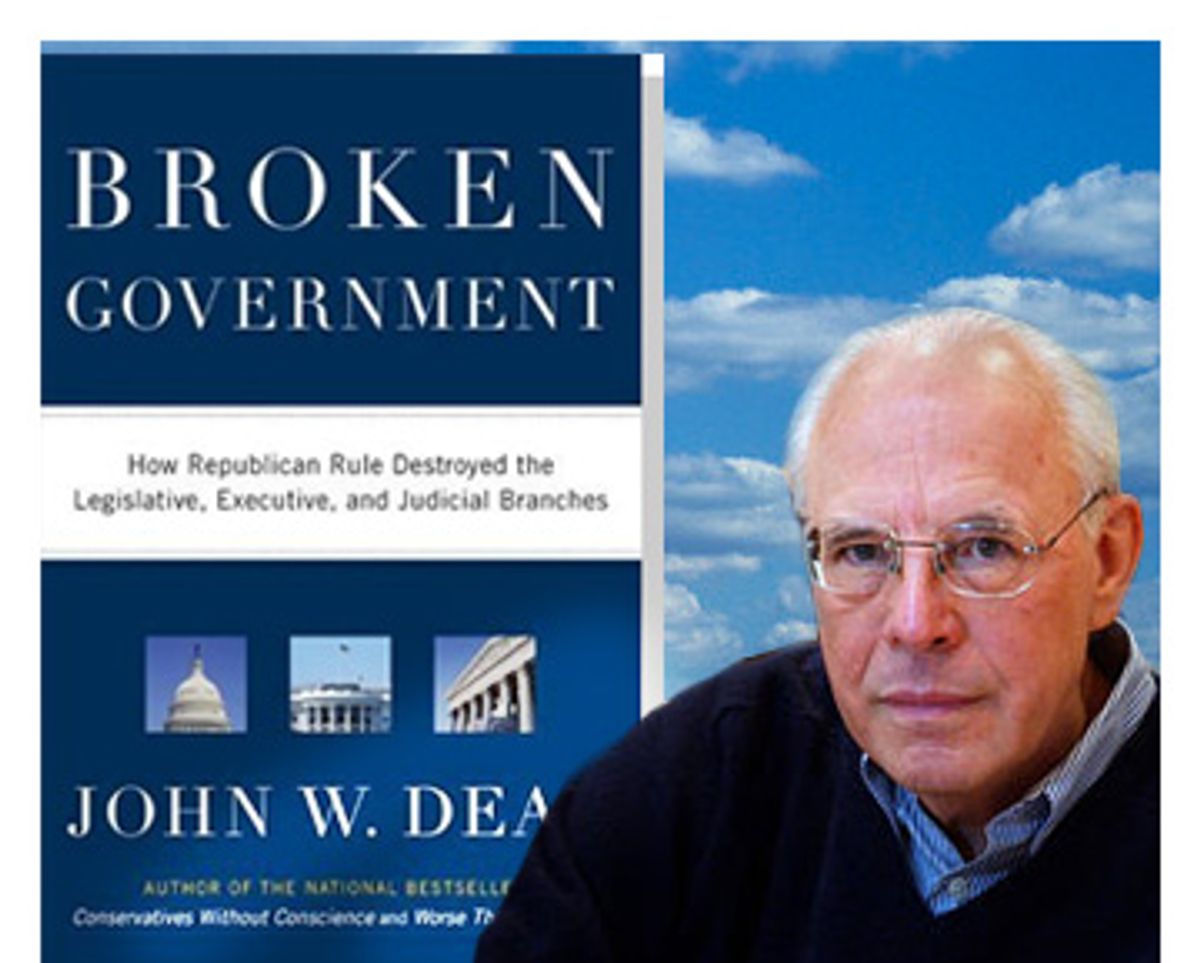 In almost four decades of involvement in national politics, much of them as a card-carrying Republican, I was never concerned that the GOP posed a threat to the well-being of our nation. Indeed, the idea would never have occurred to me, for in my experience the system took care of excesses, as it certainly did in the case of the president for whom I worked. But in recent years the system has changed, and is no longer self-correcting. Most of that change has come from Republicans, and much of it is based on their remarkably confrontational attitude, an attitude that has clearly worked for them. For example, I cannot imagine any Democratic president keeping cabinet officers as Bush has done with his secretary of defense, Donald Rumsfeld, and attorney general, Alberto Gonzales, men whom both Democrats and Republicans judged to be incompetent. Evidence that the system has changed is also apparent when a president can deliberately and openly violate the law -- as, for example, simply brushing aside serious statutory prohibitions against torture and electronic surveillance -- without any serious consequences. Similarly, but on a lesser scale, Alberto Gonzales faced no consequences when he politicized the Department of Justice as never before, allowing his aides to violate the prohibitions regarding hiring career civil servants based on their party affiliation, and then gave false public statements and testimony about the matter. When the Senate sought to pass a resolution expressing "no confidence" in the attorney general, the Republicans blocked it with a filibuster. The fact that Bush's Justice Department has become yet another political instrument should give Americans pause. This body was created by Congress to represent the interests of the people of the United States, not the Republican Party, but since the system of law no longer takes account when officials act outside the law (not to mention the Constitution), Republicans do so and get away with it.

In the past the White House (whether occupied by Republicans or Democrats) placed tight restrictions on who could contact the Department of Justice regarding pending business. It was typically limited to only the president, the vice president, the White House chief of staff and White House counsel, who were authorized to speak with the attorney general, the deputy attorney general or the top assistant and associate attorneys general. However, in the Bush White House no less than a startling 471 White House aides are authorized to speak with 30 senior Justice Department officials. It is not an exaggeration to say that the Bush administration has made the Justice Department a political extension of the White House in the area of law enforcement, which is unprecedented and seriously dilutes the credibility of the government when it goes to court. It will take years to depoliticize the Justice Department, and countless nonpolitical career attorneys -- including some of the most experienced and able men and women ever to serve in the department -- have left because of the way Bush's people run it. Ironically, when Republicans find Democratic officials with even a toe across the line, they raise unmitigated hell for that official. But when a Republican official crosses the line, Republicans close ranks around the miscreant, as they have done with the former chief of staff to the vice president, I. Lewis "Scooter" Libby.

Libby, a sophisticated Washington attorney, leaked Valerie Plame Wilson's covert CIA identity. Libby had leaked her name as part of the effort to discredit Valerie Wilson's husband, former ambassador Joe Wilson, who had traveled to Niger to determine for the CIA if Saddam Hussein had purchased uranium -- a claim that would be made by the Bush White House. When Ambassador Wilson wrote a New York Times op-ed putting the lie to that claim, Scooter Libby led the attack against him, notwithstanding the fact that he was telling the truth. One of his tactics was to claim that Wilson's wife, a covert CIA operative, had sent him on a boondoggle. Libby, as Cheney's national security adviser, was quite familiar with the potentially dire circumstances of leaking the identity of a covert agent. When special counsel Patrick Fitzgerald (the U.S. Attorney in Chicago) was appointed to investigate, Libby lied to the FBI and then to the grand jury about how he had learned of Valerie Wilson's CIA connection, claiming a newsman had told him, when, in fact, he had been told by the vice president. Although Special Counsel Fitzgerald found no criminal statute had been violated in leaking Valerie Wilson's name, he indicted and convicted Scooter Libby for false statements, perjury and obstruction of justice. Even before federal judge Reggie Walton (a Bush appointee) sentenced Libby to 30 months in prison and a $250,000 fine, Republicans were demanding that Bush pardon him.

Republicans have offered an array of explanation and justifications for a Libby pardon, but when one cuts through the smoke, what they are really arguing is that one of their own should not be punished criminally. It is an absurd position. Conservatives once claimed they stood for law and order, and that no person was above the law, but their words belie their true beliefs as expressed in their actions. Frankly, I hoped that Bush would pardon Libby, as it would have served as a particularly egregious and conspicuous example of the Republican double standard -- the authoritarian's "do as I say, not as I do" mentality. Voters understand hypocrisy, and another solid abuse of process (and power) could only help the Democrats get back into the White House.

Having watched the GOP's evolution as it embraced the radicalism of authoritarian conservatism, slowly ceding control to its most strident faction, the authoritarian conservatives, I can no longer recognize the party. These new conservative leaders have not only sought to turn back the clock, but to return to a time before the Enlightenment when there were no clocks. As former vice president Al Gore nicely stated it, the Republicans have undertaken an "assault on reason." Indeed, they have rejected their own reasoned philosophy by ignoring conservatism's teachings -- based on well-documented history -- about the dangers of concentrations of power. They have done so by focusing on the presidency as the institution in which they wish to concentrate the enormous powers of the federal government. Nixon led the way, and Reagan, Bush I, and Bush II learned from his mistakes. Nixon scowled as he scolded and secretly investigated his opponents in the name of national security; his GOP successors have smiled and reassured Americans they are operating to protect them as they have proceeded to convert the American presidency into an elective monarchy, with its own high council, which was once known as the federal judiciary.

Fortunately, the power of the authoritarian conservatism that has so dominated the Bush/Cheney presidency is waning, although it is not likely there will ever be less than about one in four Americans who will follow such authoritarian leadership without question. For authoritarian conservatism to win another presidential contest, its candidate would have to attract independent voters in addition to their hardcore base. But polling of independents reveals that they have largely become disgusted with the Republicans, and lean heavily toward the Democrats. In surveying all of the Republican contenders for the GOP nomination, I have found that to the man, they all are far more authoritarian than even the most authoritarian of the Democrats. This raises the almost certain likelihood that, regardless of how great a distance any of these GOP candidates might attempt to place between himself and the Bush/Cheney presidency during a general election campaign, in fact, if elected he is going to continue in the vein that has already caused this nation so much trouble. (There is no doubt that the GOP will select an authoritarian standard-bearer, because these are the people who are most active in the primaries and the most devoted workers in the general election. It is almost impossible for a non-authoritarian to win the Republican nomination, as the party is now structured.)

As I was writing this closing section an old friend from the Nixon White House called. Now retired, he is a lifelong Republican who told me that he voted for Bush and Cheney twice, because he knows them both personally. He asked how my new book was coming, and when I told him the title, he remarked, "I'll say the government's broken." After we discussed it, he asked how I planned to end the book, since the election was still a good distance away. I told him I was contemplating ending midsentence and immediately fading to black -- the way HBO did in the final episode of the Sopranos, but that I would settle for a nice quote from him, on the record. He explained that he constantly has to bite his tongue, and the reason he does not speak out more is because one of his sons is in an important (nonpolitical) government post, and we both know that Republicans will seek revenge wherever they can find it. How about an off-the-record comment? I asked. That he agreed to.

"Just tell your readers that you have a source who knows a lot about the Republican party from long experience, that he knows all the key movers and shakers, and he has a bit of advice: People should not vote for any Republican, because they're dangerous, dishonest and self-serving. While I once believed that Governor George Wallace had it right, that there was not a dime's worth of difference in the parties; that is not longer true. I have come to realize the Democrats really do care about people who most need help from government; Republicans care most about those who will only get richer because of government help. The government is truly broken, particularly in dealing with national security, and another four years, and heaven forbid not eight years, under the Republicans, and our grandchildren will have to build a new government, because the one we have will be unrecognizable and unworkable."

These comments summed up our current situation -- and our possible future -- as eloquently as anything I could have wished.