Bush gets no surge from Petraeus

The top general failed before Congress to clarify how America will exit the debilitating war in Iraq. 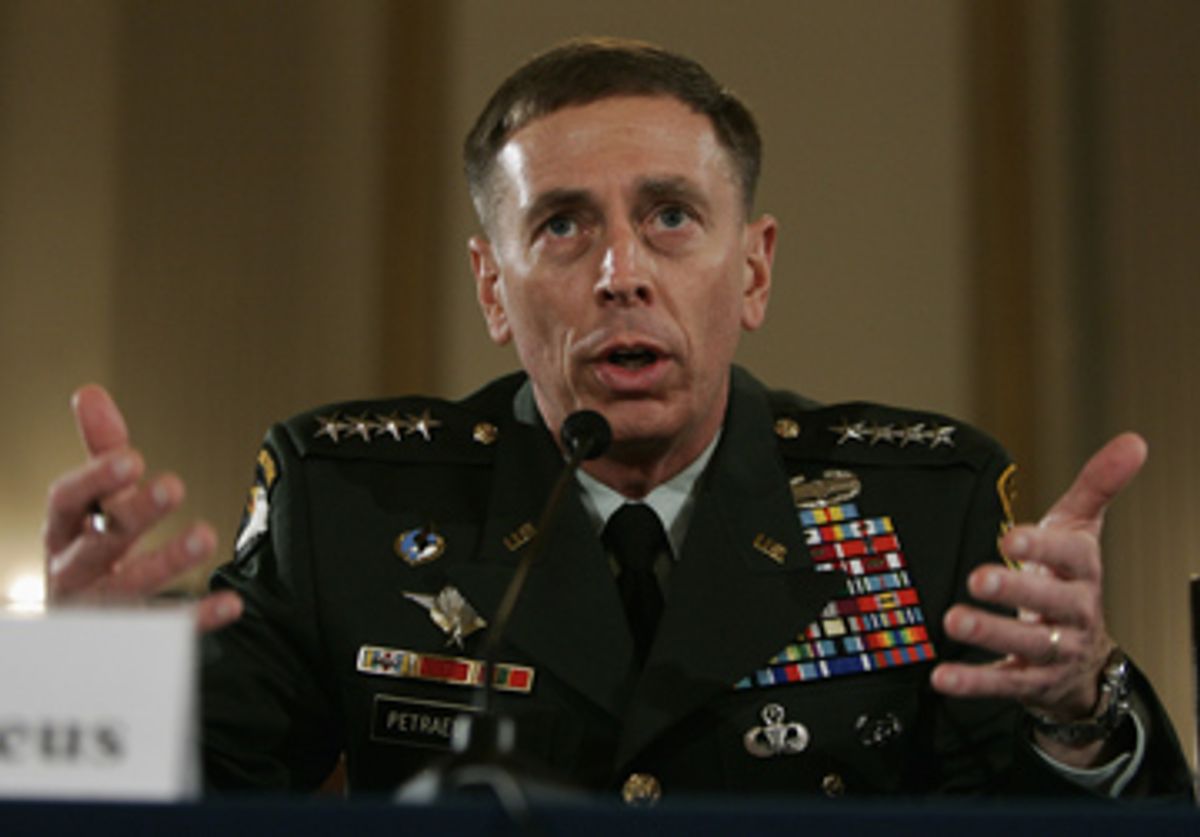 In the annals of anticlimax, Gen. David Petraeus' long-ballyhooed appearance before Congress ranks up there with the Comet Kohutek, "Godfather III" and the Y2K computer crisis. During all the frenzied fireworks and splenetic spin in advance of Petraeus' so-called progress report, no one imagined that the top general in Iraq and a veteran ambassador (Ryan Crocker) could ever make a tragic, debilitating, no-exit war so soporific.

If there was a televised image that endures, it was the sight of Petraeus, his forehead glistening with sweat from his hours in the spotlight, his shoulders shiny with four stars, and his chest bedecked with nine rows of ribbons, talking in an earnest monotone about Anbar province and formulas for measuring "ethno-sectarian" violence.

But instead of providing a detailed guide to future troop levels, Petraeus ducked specificity with vaporous sentiments: "Our experience in Iraq has repeatedly shown that projecting too far in the future is not just difficult; it can be misleading and even hazardous."

House hearings are notoriously cumbersome -- and the merging of two committees Monday afternoon to hear Petraeus and Crocker made any form of sustained questioning impossible. But as the hearing threatened to become a long day's journey into night, there was little sign of renewed Republican defections from the victory-or-bust caucus. The respectful tenor of the questioning was established early by presiding officer Ike Skelton, a 16-term moderate Missouri Democrat, who observed, "One of the great ironies of this hearing today is that General Petraeus, who sits here before us, is almost certainly the right man for the job in Iraq. But he's the right person three years too late and 250,000 troops short."

The only glimmer of news from Petraeus' statement -- the projected withdrawal of a single combat brigade in December -- was leaked overnight to the press. An antiwar Democratic senator, speaking privately, brooded Monday morning that this fig-leaf redeployment might complicate efforts in the weeks ahead to legislate an open-ended withdrawal formula with Republican support. His fear is that if the voters believe that the Bush administration is drawing down troops -- even at glacial speed -- they might not see the need for congressional efforts to mandate an exit strategy.

But it should be scant surprise that the "surge" in force levels to 160,000 troops in Iraq will end before anyone credibly glimpses "a light at the end of the tunnel." As retired Maj. Gen. John Batiste, who led the Army's 1st Infantry Division in Iraq, told Salon in a recent interview, "It is almost irrelevant what Petraeus says. The real question is: How long can you sustain this? What happens if there is an urgent situation somewhere else in the world?"

Petraeus on Monday portrayed the projected return to "pre-surge levels of 15 brigade combat teams by mid-July 2008" as a sign of progress. In reality, as Batiste anticipated, it is merely a symbol of the nation's overstretched military belatedly bowing to reality.

A series of national polls released Monday underscored exactly how isolated George W. Bush has become on Iraq. It is not much of an exaggeration to suggest that the typical college student has more friends on his or her MySpace page than the president has supporters on the war. A New York Times/CBS News Poll discovered that just 5 percent of all voters look to the Bush administration -- rather than the military or Congress -- to resolve the Iraq war. A USA Today/Gallup Poll found that less than a third of the electorate (32 percent) believes that the surge has made the situation in Iraq "better."

Even had Petraeus been a scintillating witness, it is doubtful that the general could have won many converts for the stay-the-course strategy. As political psychologist Steven Kull, who directs the Washington-based Program on International Policy Attitudes, puts it, "The American people are interested in being shown something else in Iraq because they don't like any of the current options. But there's no one-liner, no argument that will persuade them. They have to be shown that we can succeed."

And Petraeus and Crocker had little to offer beyond statistics, upbeat anecdotes from Anbar province and ominous references to al-Qaida in Iraq. Nothing that was said Monday is likely to change the contours of the debate, since rhetoric alone will not salvage support for the nation's misadventure in Iraq.

Everyone's favorite historical analogy Monday was Gen. William Westmoreland, the commander in Vietnam, being repeatedly called home by Lyndon Johnson in 1967 to make the case to Congress and on television that victory was within America's grasp. In November 1967, Westmoreland confidently predicted on "Meet the Press" that U.S. and South Vietnamese forces were "winning the war of attrition." At the National Press Club, the general optimistically talked about how the war would soon be at the point "when the end begins to come into view."

But Westmoreland's upbeat words were soon overwhelmed by a far more persuasive reality -- battlefield images from the Tet Offensive in Vietnam. John Mueller, a political scientist at Ohio State University who studies public attitudes on national-security issues, says that Westmoreland's 1967 public-relations offensive produced a "slight upward bump of a few percentage points in support for the Vietnam War, but it didn't last long."

Mueller put this week's marathon march through Washington by Petraeus in the same category. "You may have this burst of optimism," he said. "But then the news from Iraq will continue with more bombings, with more sectarian violence, and -- most important of all in terms of public attitudes -- the deaths of more Americans."

In political terms, perhaps the most memorable event of the week took place in the pages of the New York Times rather than the hearing rooms of Capitol Hill. MoveOn.org Political Action took out a full-page advertisement in the Times raising valid questions about the independence of Petraeus' upcoming testimony -- though in a burst of near-impossible-to-defend hyperbole, the ad was headlined "GENERAL PETRAEUS OR GENERAL BETRAY US?"

Asked in an interview to back up the inflammatory headline, Nita Chaudhary, a spokesperson for MoveOn, said, "We stand behind the ad." While Chaudhary offered citations for most of the claims in the ad's copy, she did not offer any justification for the headline's implication that the four-star general was betraying the nation whose uniform he wore. "He's going to produce cherry-picked facts, misleading data and massaged intelligence," Chaudhary said.

Rather than express discomfort with an unpopular war in Iraq, the senior House Republicans at Monday's hearing took the politically easy route of denouncing MoveOn and its intemperate language about Petraeus. Coupled with repeated interruptions by antiwar protesters, the initial tenor of the hearings made Petraeus seem moderate and reasonable in insisting that there was no way out of Iraq as long as Bush is president.

Petraeus is apt to spend a difficult day Tuesday facing more adroit questioning from a Senate panel filled with both Democrats and respected Republicans, such as Virginia's John Warner, who are publicly skeptical about the war. But in all likelihood, the most important aspect of this week's testimony is that Congress can no longer justify its own dilatory tactics on the war by claiming that it is waiting for mythical magical revelations from Gen. David Petraeus -- and a surge that has changed little in a misbegotten war.