Viacom would rather pay Google than let a lousy Video Music Awards gig go on YouTube. 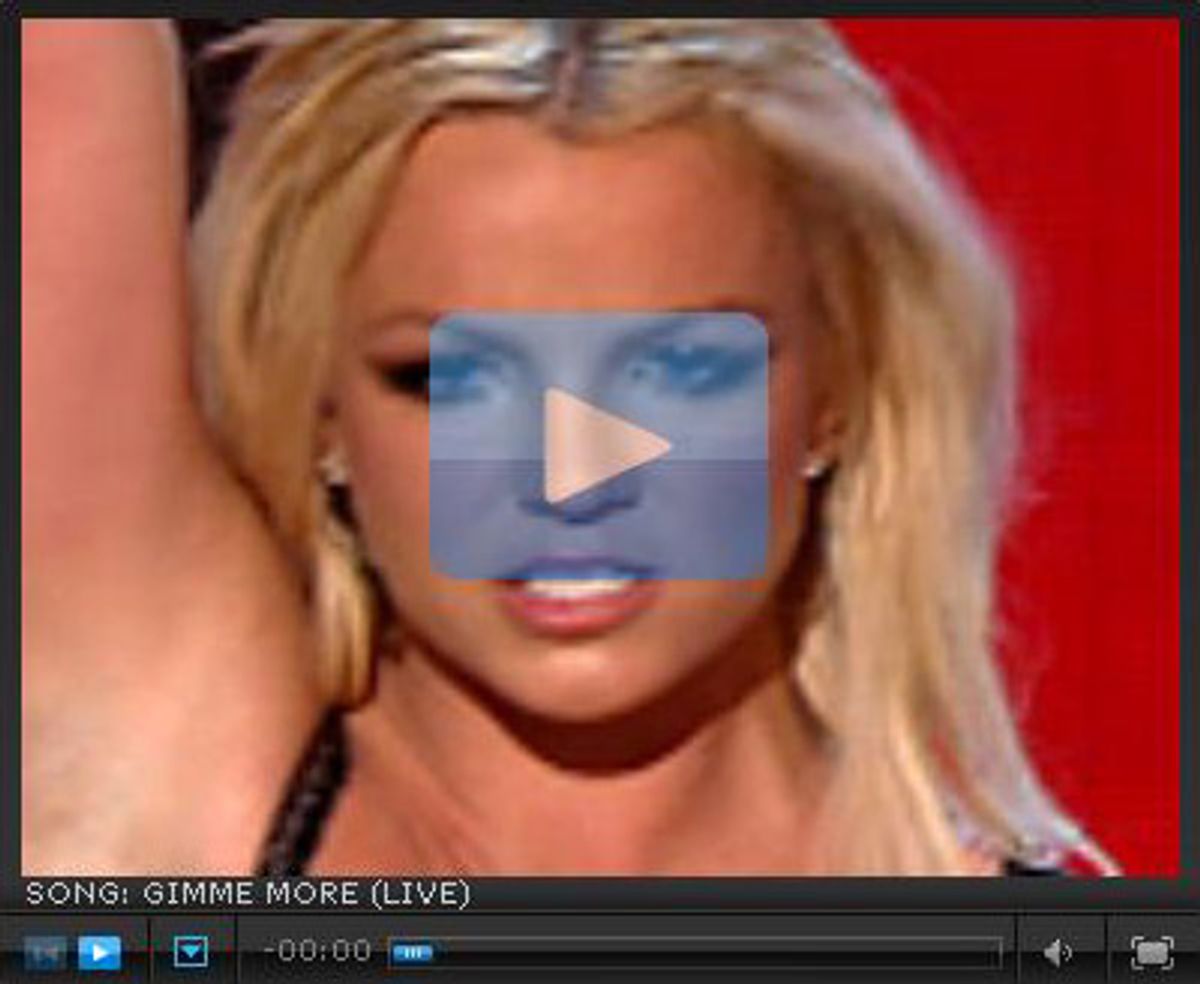 The back story you know: Britney Spears' performance at MTV's Video Music Awards was billed as a make-or-break comeback, and it broke. The Web gossips say that rather than cramming for the show -- whatever that would mean -- Spears spent the pre-VMA weekend partying with celebs in Vegas. Come concert time she lethargically lip-synced through her single "Gimme More," bringing about as much enthusiasm to the gig as she does to mothering.

But you want proof. You want to watch the video. And so, naturally, you consult YouTube. And hey, look, someone's uploaded it.

But wait: Click on the several VMA clips that come up when you search for Spears and you find they're gone. "This video is no longer available due to a copyright claim by Viacom International Inc.," YouTube tells you.

Huh. Viacom is MTV's corporate parent and a YouTube archrival. The company has sued Google, YouTube's parent, seeking remuneration for the many Viacom videos people have watched on YouTube. So it's understandable the company would quickly pull down its wares from YouTube -- and, as this search shows, it's completely ridiculous, because rather than helping you watch its videos, Viacom is standing in your way.

So after YouTube, you do a Google search for britney spears vma video. And again you find nothing. Of the top 10 links that come up, there are a couple of Spears fan sites and several blog and news reports panning the performance, but no links to the video.

But wait. Look to the right side of the page in the "sponsored link" section -- yes, that section you never look at. Right there is a link to MTV. The tag says "Watch Clips From Brit's VMA Performance -- Only on MTV.com!" Click it and you get to this site, MTV's Buzzworthy blog, which -- aha! -- includes the VMA video. Finally.

But there's a lot more here than just the VMA video. The Buzzworthy blog also includes an embarrassing pro-Britney rant. Excerpt: "She opened the show with her new song, 'Gimme More,' while showing off a healthy bod in a bedazzled bikini. Aw yeah! We knew our girl would pull it off ... We know you're screaming gimme more, more, more Brit right about now ... and we're right there with ya'll!"

After watching the video, you find yourself completely disagreeing with this assessment of Spears' performance. Indeed you find yourself disagreeing so vehemently -- you're screaming "gimme less, gimme less!" -- that you reach for your blog. You decide, too, that you want to show your readers the full awfulness of Britney on MTV. But when you go back to the Buzzworthy blog and click around on the video for an embed url, you see there's none.

Yes, not only will Viacom prevent you from putting the Britney Spears video on YouTube, it also won't let you put the video on your blog. The only acceptable way to watch the Britney video is to go to MTV.

You might argue that this isn't important. Who cares if we can't find Britney Spears' lousy performance online?

Well, Viacom should. People really wanted to watch the Britney video. According to Google Trends, at one point Monday "britney spears vma video" cracked the Top 10 searches on the Web.

Viacom could have profited from the deal, too. Not long ago, Google unveiled a plan to place commercials in videos that big media companies upload to YouTube. Google pays the media firms half of the revenues it generates from the ads.

In other words, Google would have paid Viacom for letting the VMA video go to YouTube. Instead, in order to keep the video on its own site, Viacom ran an ad on Google pointing to MTV.

Let me say that again: In pursuit of complete control of its content, Viacom would rather pay Google than take Google's money. Viacom shareholders, are you listening to this?

But hey, if Viacom wants to pay Google, let's make sure it does. So here's my advice to anyone wanting to watch the Britney VMA video. Instead of clicking directly on the Buzzworthy link from above, do a Google search for "britney spears VMA video," and then click the MTV ad. When you do that, cash will flow out of Viacom's pocket -- and maybe at some point, when enough spills out, Viacom will come to see that its copyright policy is as wrongheaded as Britney's decision to cavort with Mr. PopoZão.

And bloggers, here's a shout out to you (Update: Never mind, MTV broke the embed function; see below). If you want to embed the Britney video on your page, use this text, found in the source code of the Buzzworthy page. (As MTV would say, Aw yeah!)