Will the war make us safer? Petraeus says he doesn't know 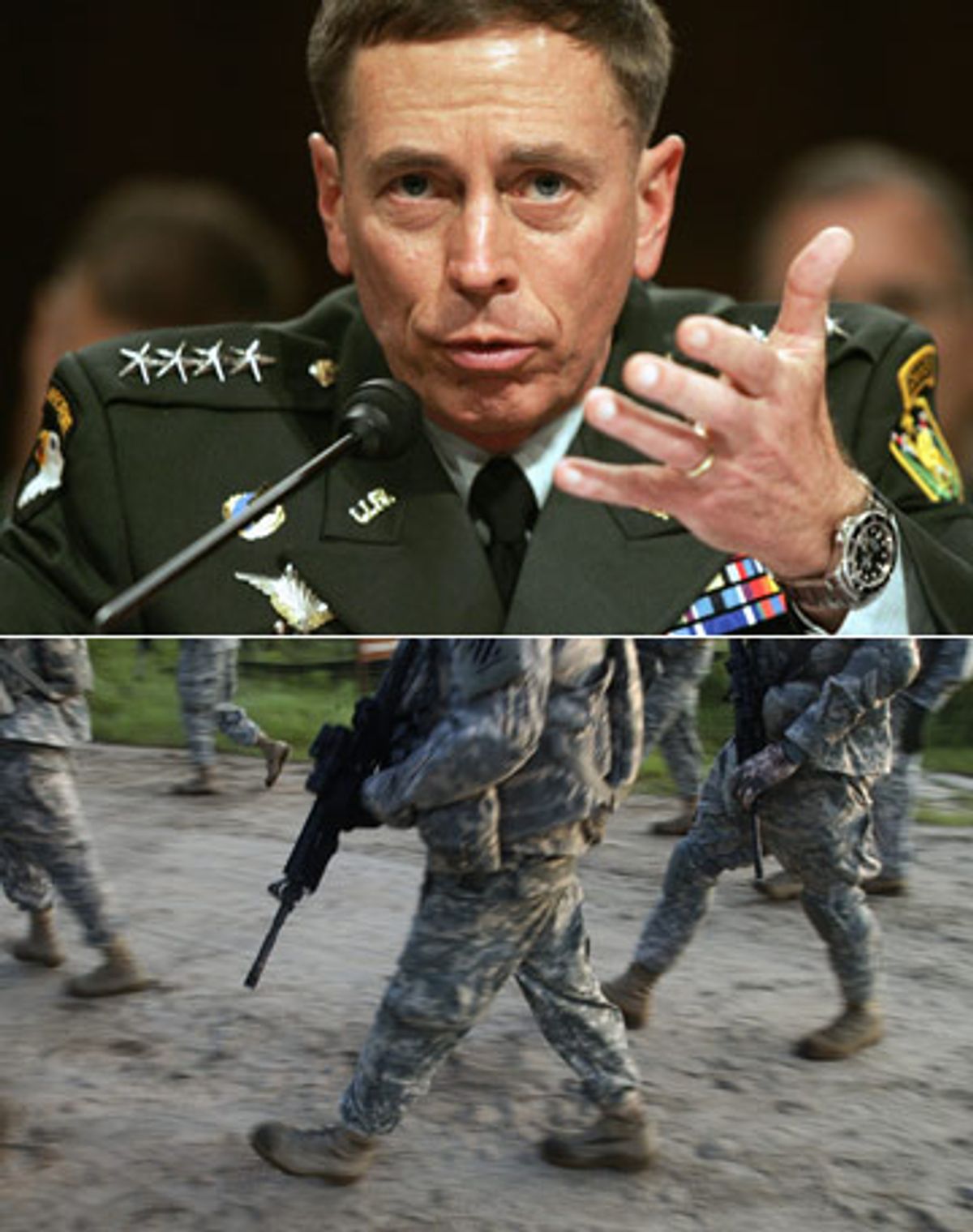 As this afternoon's Senate Armed Services Committee hearing began, chairman Carl Levin told Gen. David Petraeus that because he has already read his opening statement to the House Armed Services and Foreign Affairs committees and to the Senate Foreign Relations Committee, he could skip it or shorten it this time around.

Petraeus declined the offer, then launched into what turned out to be a very slightly abbreviated version of the very long opening statement he has delivered twice already. So we heard once again that the "military objectives of the 'surge' are, in large measure, being met," that Petraeus' testimony is his own, and that the "battlefield geometry" suggests that it's appropriate to recommend "a drawdown of the surge forces from Iraq." At the appropriate moment -- at exactly the same moment -- two Army officers in dress uniforms stood up at either side of the room and flipped through blown-up charts and graphs, calling attention to key points with yardlong wooden pointers that they moved in almost perfect synchronicity, just like they did the last time and the time before that.

Any moment now, a Code Pink protester will stand up and yell, "Tell the truth!" and the Capitol Police will hustle her out of the room. At some point in the next hour or so, some Republican member of the committee will complain about that MoveOn ad that calls Petraeus "Betray Us" and then chide Democrats for disrespecting the troops. Our money is on John Cornyn, but only if the rather frighteningly recoifed Elizabeth Dole doesn't beat him to it. And right around then, a Democratic presidential candidate -- it was Barack Obama this morning, it will be Hillary Clinton this afternoon -- will use the time set aside for questioning Petraeus to say whatever needs to be said for this news cycle instead.

Then, when almost everyone else has left, Virginia Sen. Jim Webb will finally get a chance to talk, and he'll ask Petraeus again about the burden accelerated rotations are putting on the troops.

Will there be anything new in Petraeus/Crocker III? Sure. Sen. John McCain has a Johnnie Cochran-esque rhyme -- "We cannot choose to lose!" -- and Ted Kennedy has a good made-for-TV line: The Iraqi political leadership is "holding hostage" the Americans who are now fighting for their country. Neither Maine Sen. Susan Collins nor the pearls with which she's fidgeting were here for either of the prior hearings, and we haven't seen Joe Lieberman try to push his chair as far away from Kennedy's as he's doing right now.

What else? Under questioning from Levin, ambassador Ryan Crocker denies that he told Time's Joe Klein that it might be a "good thing" if Iraqi Prime Minister Nouri al-Maliki's government fell. Klein, who's sitting in the front row of the press section, puts his hands on his face, shakes his head, then passes a note to one of the suits sitting behind Crocker.

Rep. John Warner, sitting so far forward that it looks as if he might come over the dais at any moment, notes that Petraeus has told his troops that "many of us had hoped this summer would be a time of tangible political progress" in Iraq. What was the basis for that hope, Warner asks. "The projections, in most cases, of those who came before us," Petraeus responds. Eyes afire, Warner reads an excerpt from the January 2007 National Intelligence Estimate, the part in which the nation's intelligence communities say that political reconciliation in Iraq is unlikely if not impossible.

Warner, entering the final days of a Senate career that began three decades ago, reads the words of Gen. George Marshall, who said he put casualty figures from World War II in front of Franklin D. Roosevelt as often as he could so that the president would remember the costs. Warner says he knows that Petraeus feels casualties deeply, and that he hopes that he will remember the costs as he makes his recommendations for going forward in Iraq.

Then Warner puts his question to Petraeus: Can the general say that if his plan for Iraq is pursued, it will make America safer? Petraeus pauses, then says: "I believe that this is indeed the best course of action to achieve our objectives in Iraq."

Yes, Warner says, but "does that make America safer?"

"I don't know, actually," Petraeus answers. "I have not sat down and sorted it out in my own mind. What I have focused on and riveted on is how to accomplish the mission of the Multi-National Force-Iraq."