Hit her, baby, one more time

MTV hired Britney Spears to make an ass of herself and she sadly complied. The humiliation continues. 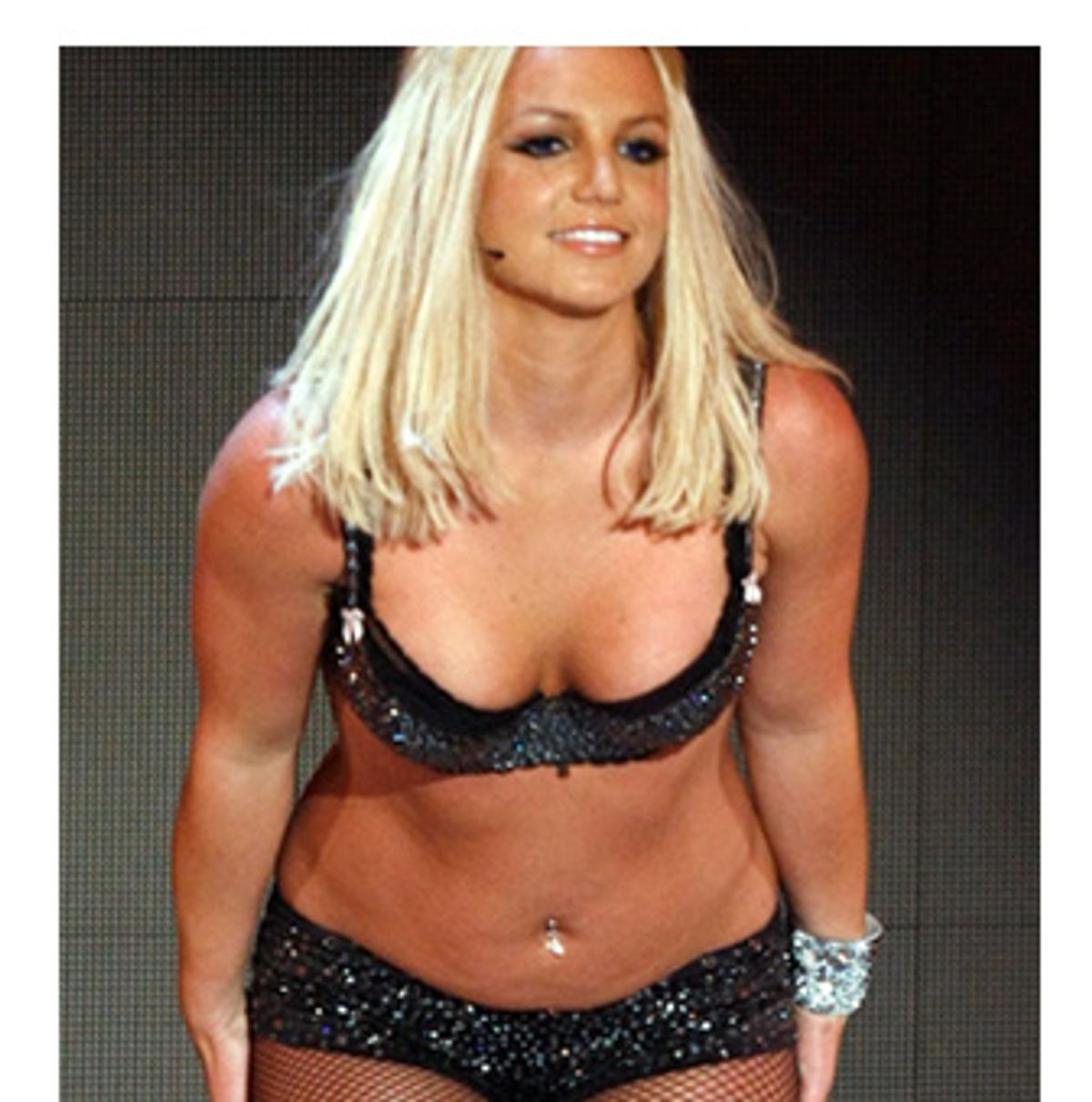 Who can believe that there is anything more to say about Britney Spears at this point? But, alas, there is. Spears has come to represent something -- something important enough that it keeps rearing its head. As has been pointed out before, she embodies the disdain in which this culture holds its young women: the desire to sexualize and spoil them while young, and to degrade and punish them as they get older. Of course, she also represents a youthful feminine willingness -- stupid or manipulated as it may be -- to conform to the culture's every humiliating expectation of her.

What happened to Spears, and what she chose to do to herself, this weekend was actually pretty hard to watch -- a gross example of exactly how much malicious satisfaction we get out of the embarrassing weakness of an addictive, postpartum, out-of-control mess of a human being. But as sad as anything is that the young musician shows zero interest in making it stop.

After more than a year of tabloid-chronicled personal spiral that has included rumors of drug and alcohol abuse, a scalp-shearing breakdown, a few trips through rehab, visits from the department of child welfare, and a lot of genital exposure, MTV somehow saw fit to sell its annual spectacle of ever-decreasing returns -- the 24th annual Video Music Awards --with an opening "comeback" number performed by the 25-year-old.

Why anyone thought this was a good idea is beyond me. Sure, this was the event where a younger, healthier Spears had once sold soap by tongue-kissing Madonna, herself a VMA-display veteran who'd made her name by dry-humping the stage in a bridal ensemble. But those previous newsmaking appearances had been rooted in carefully executed, meticulously planned musical spectacles designed to promote well-packaged and -presented music. If there'd been any indication that Spears was making a serious comeback, if there were any word that her new song was excellent, if there was the slightest sign that she'd been preparing or practicing to return to the stage in front of a national audience, I suppose this presentation might have been a good idea. But any supermarket-line reader knows that Spears has spent recent weeks drinking, backing out of a duet with her ex (the vastly more successful Justin Timberlake), crying in public, feuding with her estranged parents (the stage-parenting sculptors of her doom, now recast as doting grandparents), and dating some super-skeevy "magician" named Criss Angell.

The point is that everyone -- including MTV, and Britney Spears -- was perfectly aware of this. No one would think that the performer, whose music has historically been catchy, but whose live performance appeal has rested on her super-fit ability to writhe around in athletic dance routines that could only succeed if rehearsed with Waffen-level discipline, could pull this off. She was hired by MTV to attract viewers eager to see her make an ass of herself. And she was complicit in her own public flogging, apparently doing nothing to prepare, making no effort to learn the words to her own song, or the dance moves she was supposed to execute.

Spears' performance was execrable. Dressed in an unflattering sparkly bikini, Spears stumbled, wobbled, looked disoriented and confused; she barely moved through much of the routine, stepping tentatively around the stage while the dancers around her flipped and twirled. She couldn't remember the words to the song to which she was lip-syncing and eventually stopped trying to even pretend to recognize them.

The cameras showed VMA guests staring in disbelief. And when Sarah Silverman took the stage after the performance, she sated the public's appetite for girl-on-girl evisceration, unfunnily identifying Spears as a 25-year-old who's "already accomplished everything she's going to accomplish in her life," calling her sons "the most adorable mistakes you will ever see," and imitating what Spears' much-photographed "hairless vagina" looks like by pulling her lips together sideways. It was spectacularly painful, mostly because it violated one of the rules of dirty mean comedy: You don't sharpen your talons on the weak. Imagine Spears having come off a stage where she had been invited to humiliate herself only to hear a crowd roar in whooping, derisive appreciation for the woman narrating her breakdown. But then, imagine Spears accepting the invitation to her latest public self-immolation and then obligingly lighting the match.

Spears is living out our ur-nightmares -- showing up naked at school, or arriving at a test that we didn't know we had while everyone chortles and points and we fail. That is actually what MTV set her up to do on Sunday night and since, as we've passed around the video clip of her lameness.

It didn't stop with laughing. There was also the harsh but deserved criticism of her performance and, more horrendously, of her physique. Spears, it seems, two children and five years of self-abuse later, no longer pleases the public with her hourglass shape. No, her ill-fitting outfit showed off a figure that was not as compact and pink as it was when she was a teenager. Sure, she looked better in a bikini than probably 98 percent of the Americans sitting on their couches and howling at her, but she was no longer porn-star perfect. And in the American lexicon, that equals fat. Wonder why your daughters have eating disorders and hate their bodies? Maybe because they're reading reports that label the thin young woman dancing around in a bra and panties physically unappealing and obese.

Subsequent reports seem to indicate that Spears insisted on wearing that get-up, maybe remembering with Pavlovian conviction that in the past when she'd worn such outfits, she'd received panting approval.

Or maybe she wasn't going for approval at all. The woman may be addled enough to not even care. Further accounts of the VMAs have her arriving hours late for rehearsals, drinking margaritas, and turning in so limp an effort that many of the planned dance moves were scrapped altogether.

They also indicate that whatever Spears was going for, she was brutally embarrassed by the reception she received. And, of course, that her reaction was to hit Vegas and perform the acts that seem to pass as talent in Hollywood these days: getting loaded and flashing her cooter. And so it continues, the nauseating spiral.

It's a sickening covenant that seems, more and more, the building block of our pop-culture representation of young femininity. Two weeks ago, I wrote about the jeering treatment of Lauren Caitlin Upton, the Miss Teen USA contestant so widely ridiculed on the Web for her inane answer to a question about why children could not identify the U.S. on a map. The next day, she posted comments on the Internet braying about how famous she now was and how all her critics were simply jealous of her. She seemed perfectly satisfied with her role as a voodoo doll of dumb blondness; as long as she's embodying someone's fantasy of laughable girliness then she's getting attention, and that's what seems to count.

When I was a kid, my mother told me a story about some men she once saw on a lake in northern Maine. They were in a motorboat, chasing a swimming moose around the lake. They chased it and chased it and chased it until, finally, the moose got so tired and confused that it drowned. This, of course, was the idea: torturing an animal too stupid to swim for shore until it died, all in the name of good fun for the guys at the wheel.

It's a heart-stoppingly sad vision, and I thought of that moose when I watched Spears on the VMAs, thought of how baited and trapped and ogled she was. I hate MTV for putting her up to it, hate myself and everyone else for watching it go down. But as angry as it makes me, I have to admit: The moose never jumped in front of the boat in a rhinestone bikini.